I got my AmigaOne motherboard in December of 2004. Wow, it seems so long ago! It came with the pre-release version of AmigaOS4 installed on the 80G hard drive. The motherboard and hard drive were tested and bought separately from the rest of the system. Here is what the motherboard looks like installed in my new case. 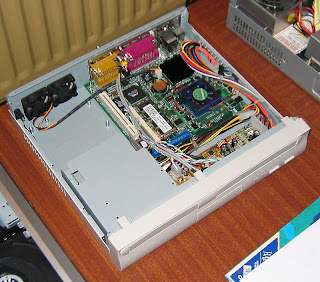 What an exciting moment it was when I first connected everything together and powered up the AmigaOne and was greeted by the Amiga OS4 workbench! The first thing I remember thinking was how wonderfully amazingly Amiga-like it was! I was expecting OS4 to be sort of like the PIOS or BE-OS demoes I had seen, nice and fast and clean, but just not Amigas.
But this thing was as good and nice and fast and clean as those other OSes, but it was the real Amiga OS! It has all the same directory structure - S:, Libs: SYS:, L:, C: - everything I had learned from my original Amiga days on my first Amiga 1000 that I got back in 1986!
And then when I began starting programs from their icons on OS4's workbench! Man, this thing was unbelievably fast! The Amiga OS was always fast and efficient - but I had never run it on an 800MHz CPU before! It was like greased lightning! 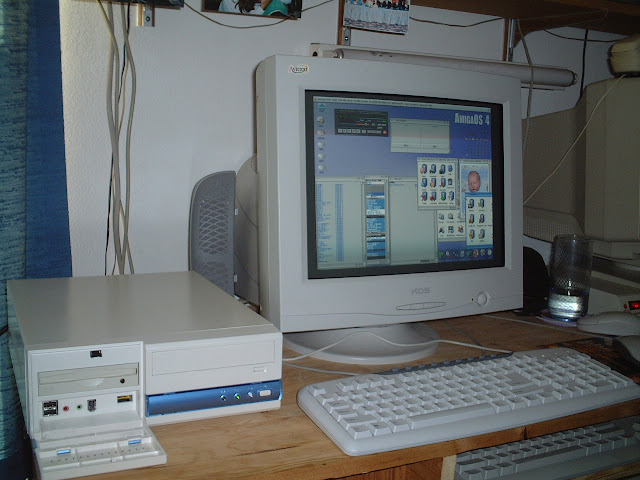 Above is a picture of my AmigaOne system - it has an internal 80G IDE hard drive, a r/w DVD drive, and an IOMega 100M ZIP drive installed in the case. I also wired up the front and rear USB connectors and sound. Why an IOMega ZIP drive, you wonder? Well, I used a 100M ZIP drive on my A1200 Amiga system (the last classic Amiga system I owned) and stored copies of everything on ZIP disks, including my system backups, graphics programs, games, emulated MAC disks, programming tools and source code - everything. That's why I bought a case that had both a 5.25 inch AND 3.5 inch external drive bay. I also bought a SIL0680 IDE interface card and plugged it into my single PCI expansion slot in my icro Amiga One so I could use all 3 IDE devices.
It ended up taking me some time to figure out why the ZIP disks I had were not readily useable on my AmigaOne. People from the AmigaWorld.net forum gave me advice over the next few weeks and I learned that at some point, IOMega had started reserving portions of each ZIP disk for file system use on PCs. IDE ZIP drives therefore, unlike my old SCSI based amiga ZIP drive, reserved the first 2 sectors of each disk. I simply had to modify my devs/dosdrivers/ZIP information to exclude these two sectors, and also had to ensure that the ZIP drive jumpers were set correctly, and then, lo and behold, I was able to read my ZIP disks on my new AmigaOne that had been written a decade or so prior on my SCSI based A1200 ZIP drive.
The next trick was - I had to ensure that I could read all the different file systems I had used to format my ZIP disks. You see, the Amiga easily and readily accommodates the use of multiple file systems for any device seamless into the OS through the use of DOSdrivers, mountlists and library files. So you can insert a ZIP disk formatted on a MAC, and by having the crossMAC file system set up on the Amiga with the appropriate mountlist file, it is recognized automatically by the Amiga OS and Workbench. Similarly with DOS formatted disks, or older Amiga FFS disks, SFS, AFS and the new JXFS file systems used over the years on Amigas.
The question was - would old 68k based device drivers work on my fancy new PPC AmigaOne? At first I thought - "No way!" How could they make such low level things as libraries and device drivers work on a completely different processor without some sort of kludge or hack to the driver software?
But, being adventurous - I tried it anyway. Guess what! My old 68k device drivers worked perfectly in OS4 on my AmigaOne! I was amazed!
Well, it was even better than I had imagined. Not only did the built in Petunia JIT 68k emulation on the AmigaOne OS4 system allow drivers to work just fine, it also allowed many many old 68k based Amiga programs to run just fine too, including most productivity software such as graphics programs, database programs, word processors, spreadsheets, money management software, all sorts of tools an utilities. It was unbelievable to me!
Man, was I enjoying OS4 and my new AmigaOne!