AmiCygnix 1.2 Upgrade and Audacious on X1000 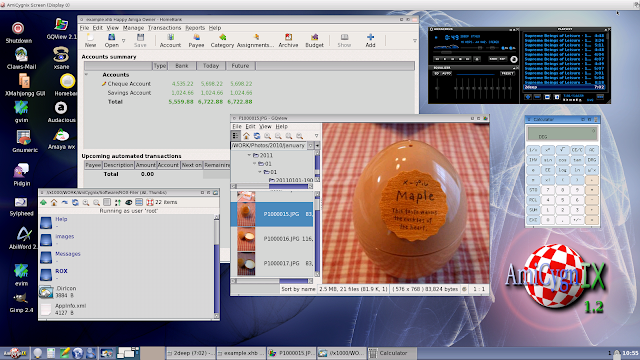 Keen to try both out on my X1000, I downloaded the hefty AmiCygnix 1.2 base and tools packages, extracted to RAM and got started with the AmiCygnix Base installation: 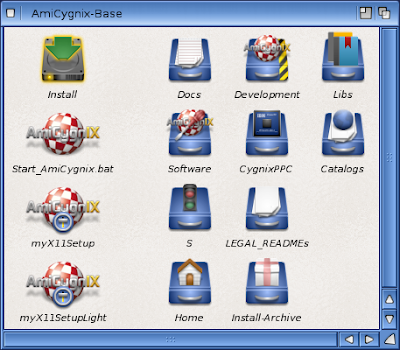 I previously covered my installation of the older AmiCygnix 1.1 in a blog entry here. So this will be an upgrade installation which may not be that helpful if you don't have AmiCygnix installed already, since the installer asks a lot more questions on a fresh installation.

As with the earlier 1.1 version it uses a standard Amiga Installer. I will step through the screens to show what to expect, the first few screens are fairly standard: 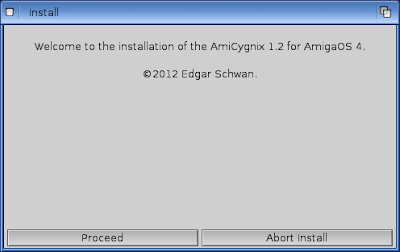 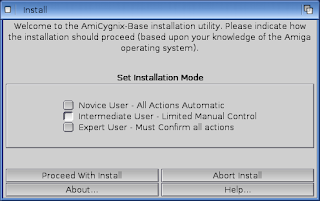 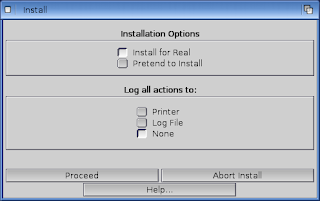 A screen pops up to gave you some warning that you need a decent amount of hard disk space and that Amicygnix should be installed on a SFS or higher filesystem. In other words, not to install AmiCygnix on the System partition. It also warns that the Random device is mounted. I did this as part of the Timberwolf installation, and the instructions to do this are included in the information also: After closing the window as prompted the installer picks up that I have AmiCygnix 1.1 installed already and that it will upgrade it: 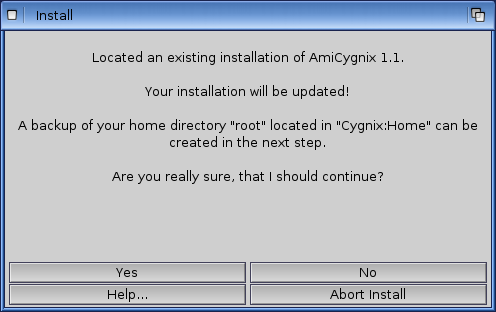 After clicking Yes, it then prompts to backup my home folder in AmiCygnix, which of course I did! 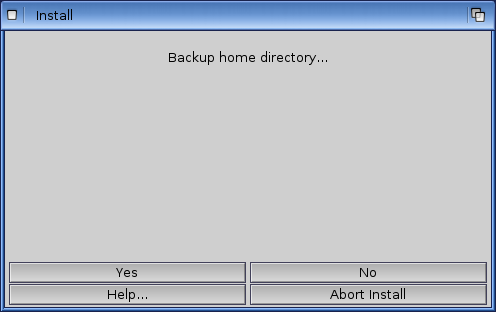 The next screen prompts for the screen resolution AmiCygnix uses to display it's session. AmiCygnix uses a separate display screen to the Workbench (although it also has seamless mode to run applications within the Workbench screen). Note that there is no option for 32bit, only 16bit is available: 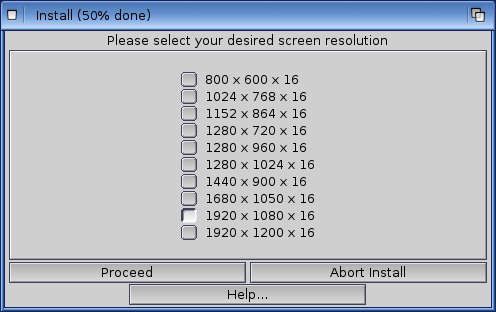 Next it asks for language and character sets, which I left as default since I am using English: 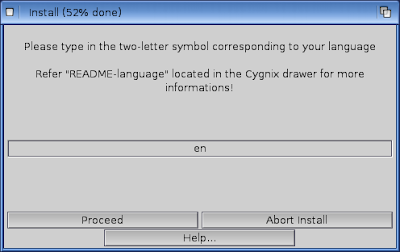 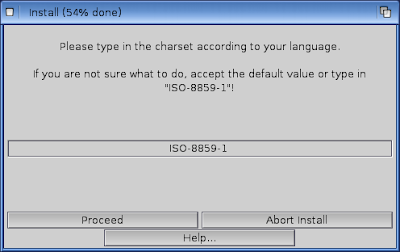 Popup screen then appears showing the timezones for selection, which need to be typed in as Country/City format, as shown in the pop up below:

Since this is an upgrade the installer already filled in the correct details from the previous installation: 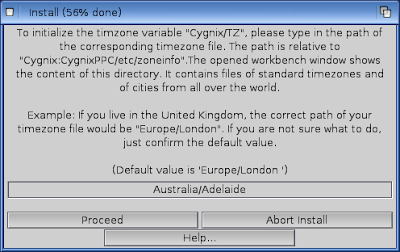 Nto sure what the Quick transfer feature is used for, but I enabled it in this next screen: 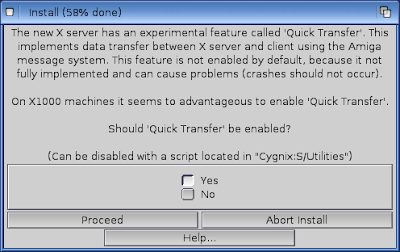 The next screens I accepted the defaults and moved on: 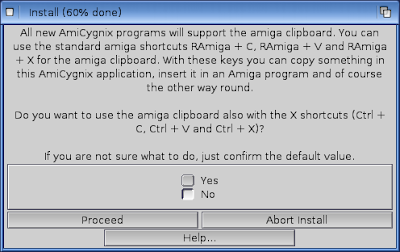 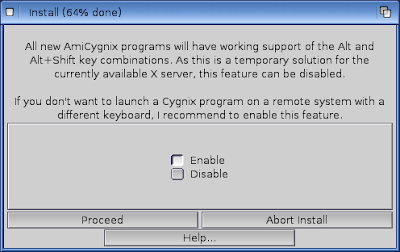 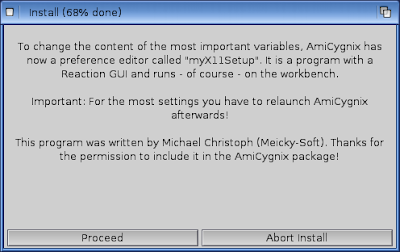 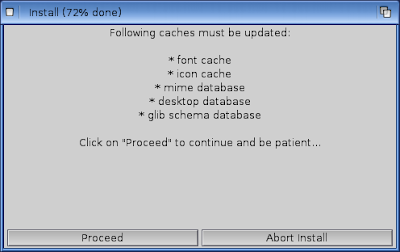 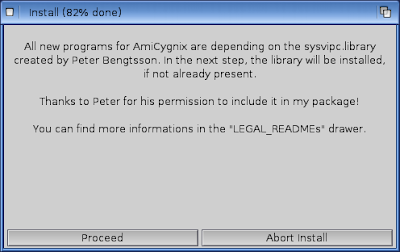 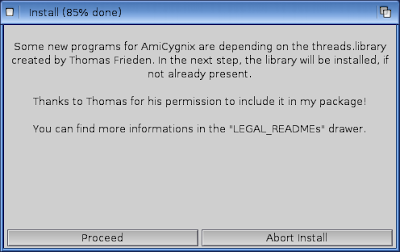 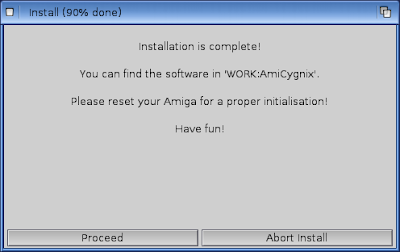 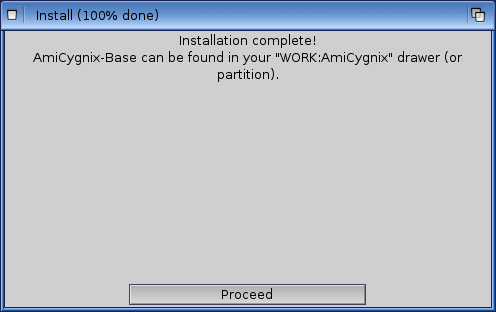 Installation is now completed and after a reboot, I was ready to install the AmiCygnix Tools package and Audacious package. Neither of these installers have any specific settings to change (just proceed through each screen) so I have not included the installer screenshots for them.

So next I ran the AmiCygnix startup and AmiCygnix desktop comes up quickly (click to expand): 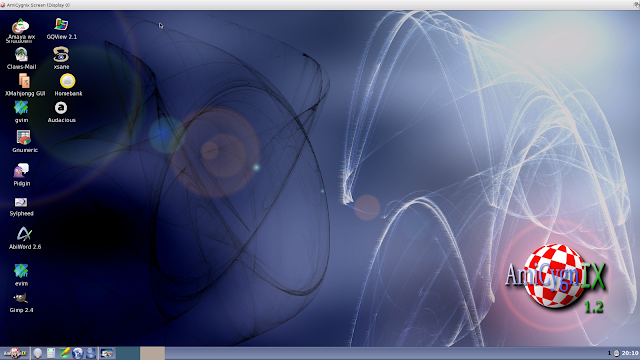 Next I ran a few applications - Audacious Music Player (in WinAmp skin mode), Homebank, ROX-Filer, GQ-View and the Calculator. All run well under AmiCygnix 1.2: 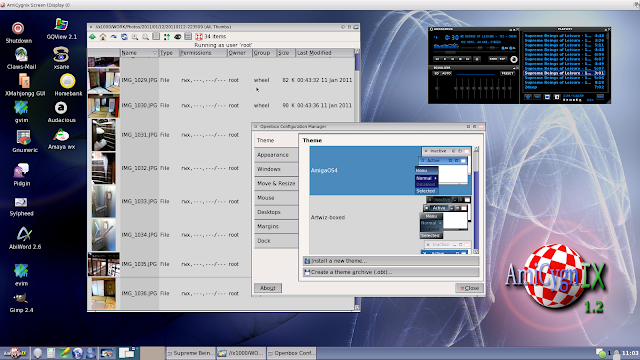 Keen to play with Audacious Music player more, I quit AmiCygnix and I fired Audacious up in seamless mode on the AmigaOS4 Workbench. There is an icon for this in the installation folder for Audacious. It opens like below on AmigaOS4: 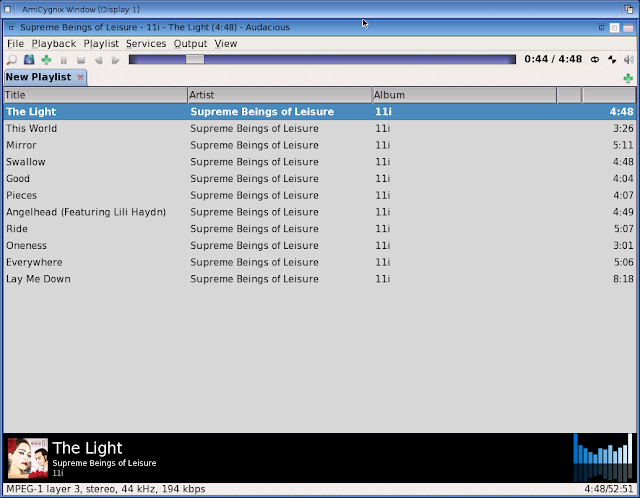 As expected it plays back mp3 and related m4a files fine and shows the album picture preview which is a nice touch - very much like iTunes.

Next I checked the Audacious settings to see what other formats it worked with: 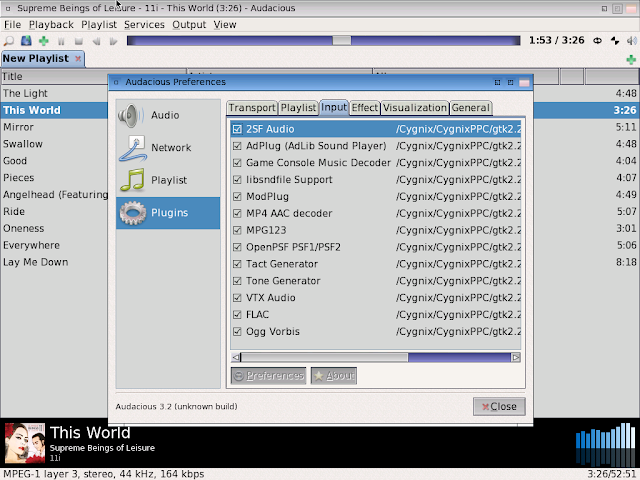 Audacious can also play FLAC, OGG and some common MOD formats (MOD, IT, S3M). Note that it won't play custom or non standard module formats commonly used on the Amiga as it doesn't have UADE support. This limits it's usefulness for me - so I will keep using TuneNet for now. Hopefully more formats will be added in the future as this program has a lot of potential!

An interesting thing I found while trying out various files is that the Audacious player can show Japanese Katakana and Hiragana in song title names and author information as below: 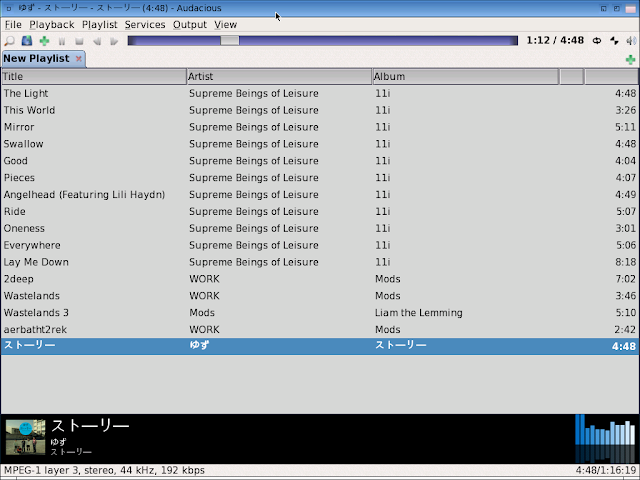 One other thing I found is that when I tried to open .M3U playlist files I created in TuneNet to reference MP3's on my system, it comes up with strange pathing errors trying to load, prompting for drive names to be mapped. I am assuming the slashes in the file names referenced in the M3U may be the issue there.

In any case, I intend to do some more exploration of this new version of AmiCygnix 1.2 and see what other improvements are there!

I hope there is a few more audio and office applications ported to AmiCygnix as it really has a lot of potential. I also hope that seamless mode can be setup to removed the window around applications under AmigaOS4 so that the applications can be truly seamless.

But I have to say I am impressed with the huge amount of work done to make AmiCygnix to date and look forward to further future updates!