Today I am looking at a game called 7 Boings on my X1000, released this year by Mrdarek and available for download on os4depot.net. 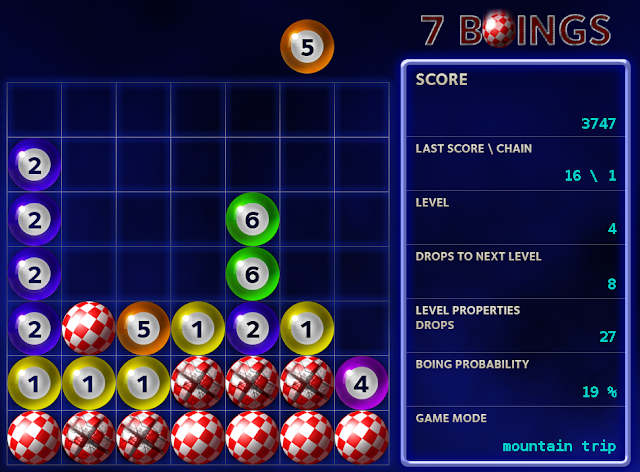 Mrdarek also brought us Ami-Ingenious earlier in 2012. I reviewed that game in another earlier blog entry here. His website is http://www.lineapolis.dizzy.pl/other.shtml

7 Boings is a sort of Tetris style puzzle game with a different spin on the usual gameplay on how balls are placed in columns, and how the rules determine which balls are removed from the game when matches are made. The rules are a bit involved and confusing at first, especially regarding when balls are exploded and removed (well for me it was confusing anyway!). It is certainly different!

Fortunately a readme is included with the game than it explains the gameplay better than I could so I include it below to get you up to speed (click to expand): 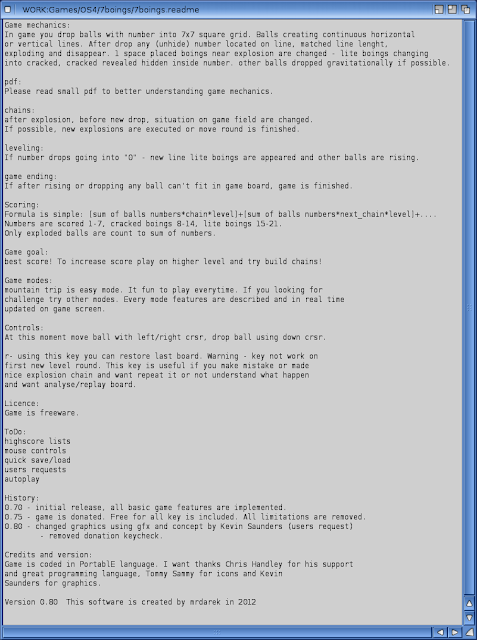 Basically, you move the ball you are given into position using the left and right cursor keys and down arrow to drop into position. Then the next ball appears. The game continues until the game field is full of balls and no further moves can be made.

After running the game, you are presented with the Main menu, which allows you to select from a number of game modes. Mountain Trip is the easiest mode, and the higher modes get more difficult: 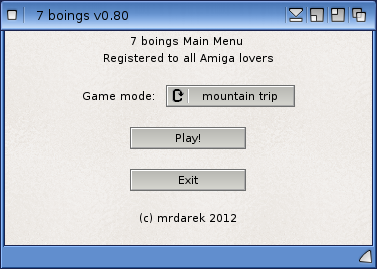 The game runs on the workbench screen - there is no option to run full screen.

At first I was confused by the colours and numbering in the game, as it made it appear that placing the same numbers and colours together it the goal, when it is not. The number on the ball dictates a match when the number of balls in a line (vertical or horizontal) will match the number on the ball being dropped. When a match is made the ball explodes, only with other similar numbered balls in the same line.

In addition to this, as the game progresses, Amiga Boing Balls appear which take 3 explosions to get rid of. The first fractures the ball, the second changes the boing ball to reveal a normal number ball, and then third gets rid of it altogether.

But I kept trying and eventually got the hang of it. Reading the readme helps but playing it makes it easier to follow what the readme rules explain.

There are 7 columns and 7 rows in the main game, along with the Amiga Boing Balls, which makes sense why the game is called 7 Boings!

So now some gameplay screenshots, first at the start of the game, using Mountain Trip mode: 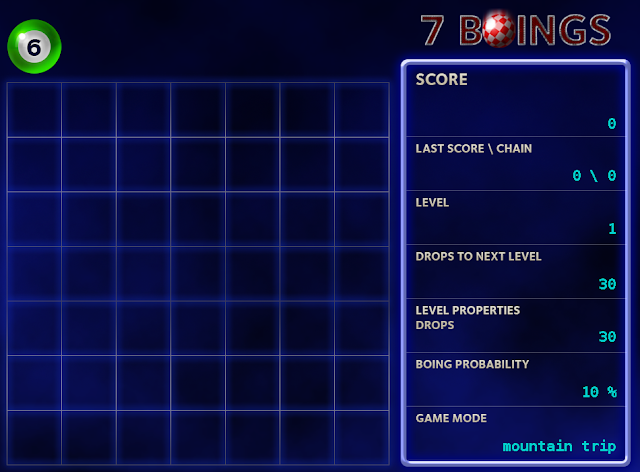 In the next screen shot you can see the 4 ball about to be dropped onto the 4th position vertically, which means it will explode, removing itself from the game: 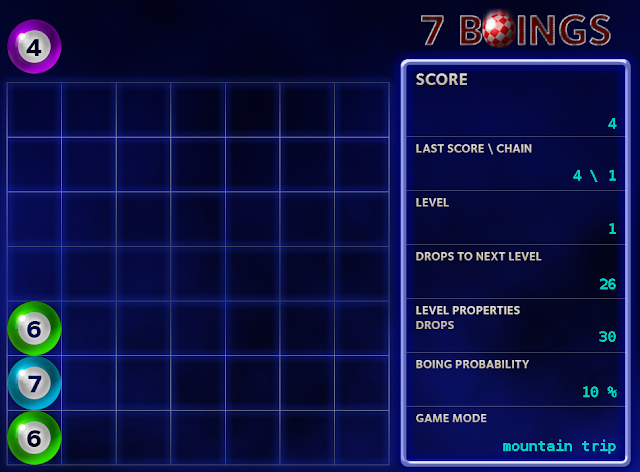 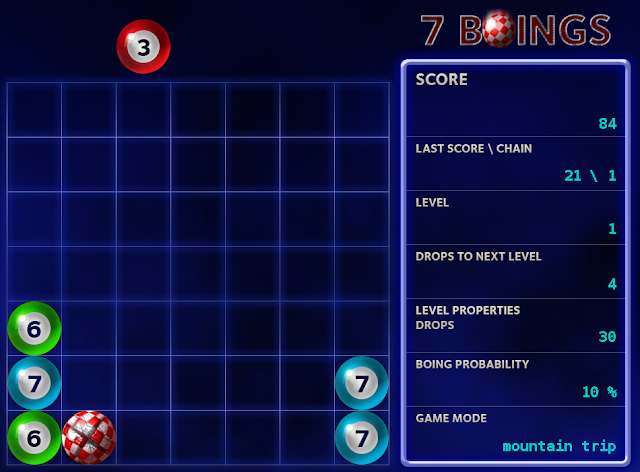 Now I am about to drop the 6 ball into the 6th position vertically, which will remove the 6 ball and the 6 ball below it: 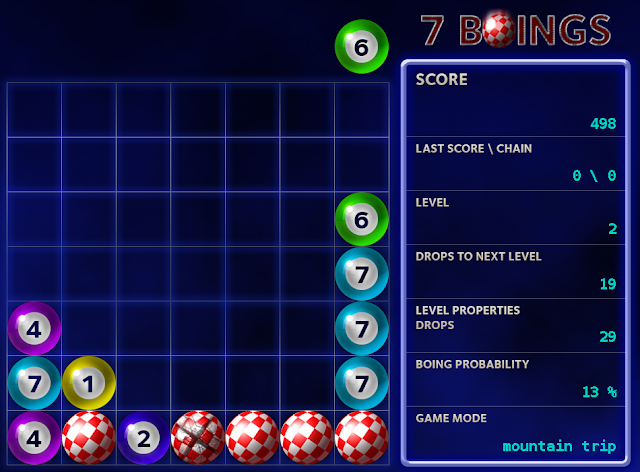 Moving on a bit in the game, there are lots of Amiga Boing Balls. After a while a row of Amiga Boing balls is added to the bottom of the game window and moves everything up one row: 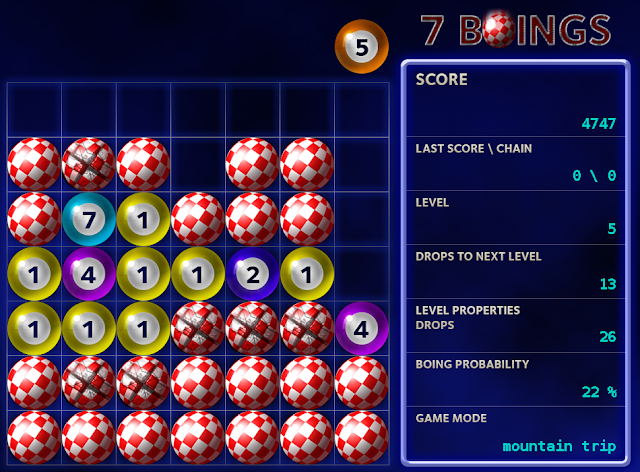 The game gets harder the more Boing Balls are around as it takes many more explosions to get rid of them: 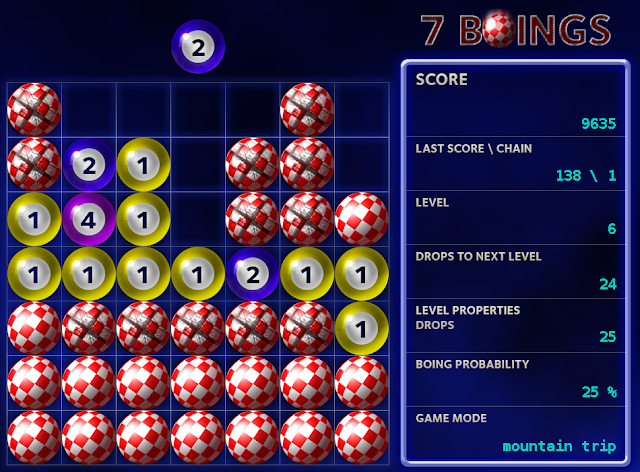 Oh dear, at this stage I am in a lot of trouble: 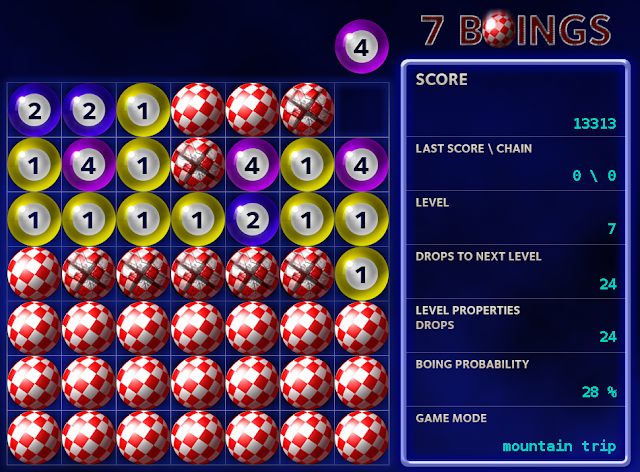 Sure enough, one last move and Game Over!: 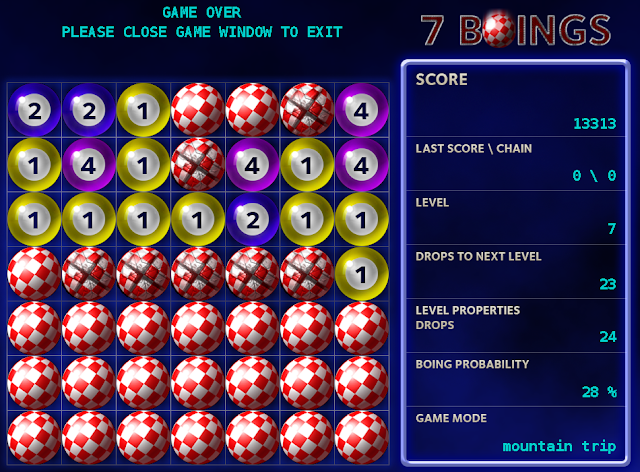 7 Boing is now free, and it is an interesting game. Although there is no music and just spot sound effects, the game is fun to play, although difficult to work out at first.

It is great to see yet more original games for AmigaOS4 in 2012!

It takes some time to understand the game mechanics in 7 Boings, but it is worth it, because behind the slightly confusing rules is a good game!