"I cannae change the laws of physics!" or so Scotty would say on Star Trek - the original series. Then 5 minutes later he would do just that, allowing Captain Kirk and the crew of the Enterprise to once again save the day!

Our very own AmigaOS "Chief Warp3D Engineer" Hans-Jorg Frieden has been working hard to make Warp3D a reality for RadeonHD graphics cards. 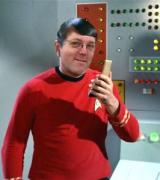 In his latest progress update, he is happy to report that texture support is now implemented. According to Hans-Jorg, "There are still a few glitches that need to be taken care of but the triangles come out as textures and the shader interface is working too." As expected, he was able to re-use much of the R200 code. Also the texture support of RadeonHD cards is much wider than that of the R200, meaning there is virtually no texture conversion required. All good news.

Chroma keying will be required to get a flawless image in Wipeout XL but Hans-Jorg claims that it is now just a matter of doing the work and, "In any case, we're approaching a state now where testing can commence". Watch this space.

Meanwhile, AmigaOS graphics guru, Hans de Ruiter has tracked down a pesky bug which was causing minor graphic glitches with some RadeonHD 5450 cards on the AmigaONE X1000.

According to Hans the glitch, which was not present on slower machines, was caused by the faster speed of the A1-X1000 and the relatively slow speed of the HD5450. Anyway he has now fixed the issue and an updated RadeonHD driver will be available for the A1-X1000 beta testers in the next couple of days. All being well the updated RadeonHD RC1 driver will be available for all registered RadeonHD users to download from the A-EON Technology website shortly afterwards.

Loriano Pagni, the talented Italian designer who created stylish cases for the MiniMig and C64 cartridge enclosures has just completed the prototype for his most ambitious "Amiga" packaging project. His Amiga 500 (and possibly A1-X1000?) inspired case, the X500 Plus, harks back to the A500's computer-in-a-keyboard design. According to Loriano, the X500 Plus case, which has been tested with x86 mini-itx and flex-atx boards as well as various Sam models, will be available in either black or white and will be supplied fully assembled with a USB keyboard. 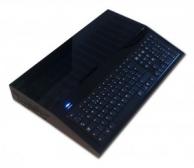 It is also expected that the case will be suitable for the Micro A1-C, Efika and Mac Mini although these motherboards have not yet been tested. Included with the case is a 40mm silent fan, a slim SATA DVD-RW drive and SATA cable together with a 3.5", 52-in-1 USB card reader. The base and rear of the case are powder coated, black or white aluminium with a matt finish. Each X500 Plus case is hand built and will retail for GBP£259 plus postage and packaging. Only 50 units will be built and supplied on a first come first served basis. Other ordering options are available. For more information please visit Loriano's website or email Loriano at: amigarulez (at) hotmail.com.

all the nostalgia surrounding the 30th anniversary of the SX-64 it got me to thinking about my favourite Commodore 8-bit computer. No it's not the Commodore PET which was my first computer or even the the C64 which was my second. Surprisingly enough, it's actually the C128D, Commodore's follow-up to the poorly received TED series (Plus/4, C16, C116 & C232). The C128 which was released in 1985, the same year as the Amiga, followed Commodore's traditional computer-in-a-keyboard design. The later C128D was built into a slim-line base unit which included an internal floppy disk drive and PSU and came with a detachable keyboard. It also bore more than a passing resemblance to the new Amiga. 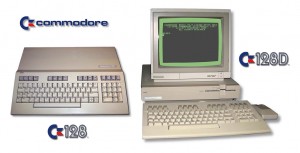 I was brought up on Basic and Fortran and the C128 introduced me to Basic 7.0 and the wonders of CP/M. It was also the first time that Commodore formally acknowledged that the Basic, which it used on all its 8-bit machines up to that point, was actually licensed from Microsoft by displaying the Microsoft copyright notice on the C128 opening screen. Commodore originally licensed Microsoft Basic for a one-off payment for $25K, in a deal which Jack Tramiel squeezed out of Bill Gates back when neither Gates nor Microsoft had any financial or technical muscle.

It taught Gate's a valuable marketing lesson and helped to shape Microsoft's future software licensing policy. Although it was an excellent deal for Commodore at the time, it would come back to haunt them when PCs running MS-DOS and then Microsoft Windows began to dominate the market. The C128 was in fact 3 computers in one. It contained a 2 MHz MOS 8502 CPU which was backward compatible with the C64's 6510. It booted to its native 40/80 column C128 Mode which ran the new Basic 7, and later an upgraded Basic 8 which needed to be loaded from floppy disk. It also sported a C64 Mode running at 1 MHz which, unlike the unsuccessful TED series, provided almost 100% compatibility with the C64 and its vast catalogue of games and utilities.

But perhaps the most unusual feature was the addition of a 4Mhz Z80 CPU which allowed the C128 to run CP/M Plus Disk Operating System created by the late Dr. Gary Kildall of Digital Research, Inc. CP/M was a leading Microcomputer Disk Operating System in the late 1970s and early 1980s prior to the rise and eventual dominance of MS-DOS. CP/M has a large catalogue of software and utilities and unlike Commodore DOS, which was stored in ROM, it had to be loaded from floppy disk. Due to design constraints the Z80 only ran at 2 MHz in the CP/M Mode. 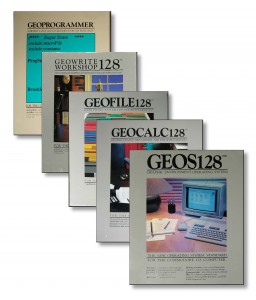 However, for me what made the C128 extra special was the release of GEOS, a GUI desktop operating system developed by Berkeley Softworks which made full use of Commodore's 1351 Mouse and Ram Expansion Units. GEOS was very successful and at its peak was the third most popular operating system behind MS-DOS and Mac OS. It spawned a whole host of official and third-party productivity software for Word-processing, DTP, Spreadsheets, Painting and Drawing etc, and for many years Commodore bundled it with its C64C package. Although GEOS was originally designed for the C64, the C128's superior hardware features (more RAM, 80 column display and faster serial bus) made it ideally suited to running GEOS and versions of the software were soon created for the native C128 Mode. 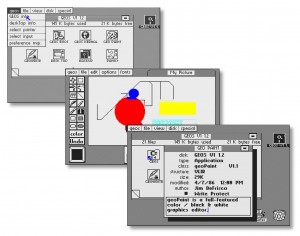 The C128D and GEOS combination gave me my first taste of a mouse and windows driven graphical user interface and prepared the ground for my eventual transition to the Amiga. It also opened my mind to trying more exotic disk-based operating systems. Ah those were the days! Although nowhere nearly as successful as its predecessor, the C64, it's estimated that at least 4 million C128 & C128D's computers were sold between 1985 and 1989.

Footnote: My original C128D was destroyed in a Texas thunderstorm in 1988 when lightning stuck the house. With the insurance check I purchased my first Amiga computer - an A2000HD. Divine intervention or what?

If you read my past blogs you may have noticed my reference to Servergy Inc, a new company based in McKinney, Texas which is developing PowerPC based server hardware (CTS-1000) and a Linux-on-Power development platform (P-Cubed). Servergy claim that its Cleantech PowerPC Server saves up to 80% in power and space saving costs compared to conventional server technology.

Interestingly, the company has not gone unnoticed by the mainstream media and EETimes, a leading electronics industry magazine for design, development engineers and technical managers, has just placed Servergy at #4 in its “Global Top 10 List” of the most disruptive start-up technology companies for 2013. In its analysis EETimes acknowledged Servergy under the headline, “Elusive startup pits IBM Power servers against x86, ARM”. According to Wiki, a disruptive company or innovation helps create a new market and eventually goes on to disrupt an existing market displacing an earlier technology. In business and technology terms this relates to, "innovations that improve a product or service in ways that the market does not expect, typically first by designing for a different set of consumers in the new market and later by lowering prices in the existing market." It seems that Servergy is attempting to create a sea change in the server market by developing low cost, energy efficient PowerPC hardware. Who said PowerPC was dead?

Life in the fast lane - part 2

Darren "Kernel" Stevens has been up to his tricks again and has released a double serving of Linux goodness for the AmigaONE X1000.

However Darren has again come to the rescue and, following a request from "First Contact" owner Zappa2009, he has added kernel support for high speed USB3.0 PCI-e plug-in cards under GNU/Linux.

The A1-X1000 now fully supports USB3.0 data transfer rates up to 5 Gbit/s while maintaining backward compatibility with USB1.1 and 2.0 devices. Zappa2009 has confirmed that his USB3 HDD, Pendrive and SDXC cardreader all work fine on his A1-X1000 under Linux. I also managed to track down one of the USB 3.0 cards and have successfully tested it under MintPPC on my own A1-X1000 with my USB 3.0 HDD.

All we need now is the new USB 3.0 AmigaOS 4 drivers to be completed. Please visit the Hyperion Entertainment Message Boards for more information.

After installing the USB3.0 card I still have two slots free in my A1-X1000. One is reserved for my new Xorro board which is en-route from AmigaKit which leaves one PCI-e slot left to fill.

Now, what can I install in this spare slot?