You will have no doubt heard the phrase... Sticks and stones may break my bones but names will never hurt me... or so the saying goes. According to wiki this sentiment is reflected in the common law of civil assault which states that name calling, unlike putting someone in fear of physical violence, does not give rise to a cause of action.

It seems that New Zealand's law makers don't agree and are considering plans to make it an offence to send messages and post material on-line that is grossly offensive, indecent, obscene, menacing or knowingly false, punishable by up to three months imprisonment or a $2000 fine. OK the proposed laws are aimed at extreme cases of Cyber bullying, but posting abusive or knowingly false material could put an end to many a trolls promising career.

How the New Zealand authorities hope to actually police this is unknown but the way they are sizing up the problem could lead to even more internet regulation and governance. Already companies are using evidence gathered from their employee's FaceBook, Twitter and other social media accounts to sack them for slagging off the boss or “throwing” a sickie. It seems “Big Brother” really is watching you?

The internet and the World Wide Web as we know it today has only been in existence for a very short time. Vint Cerf, one of the fathers of the internet, claims that 99% of the web's uses haven't even been discovered yet. And that is the root of the problem. The rapidly evolving medium is far ahead of Governments and lawmakers who are fighting hard to put the digital genie back in the bottle. While lawmakers struggle to come to terms with the digital age it is important that they don't upset the fine line between harassment, privacy and human rights. 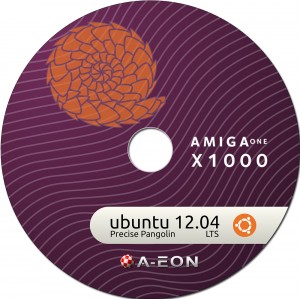 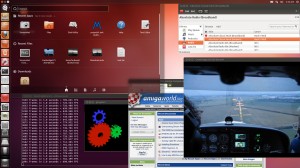 As a test I decided to play a video file with MPlayer while browsing the web with Firefox. At the same time I ran the glxgears 3D demo and used Rhythmbox to play an Internet radio station. The Live Ubuntu CD coped with all tasks. It's a little slower to boot up than Pat's Live USB option but once up and running it performs reasonably well. Of course for best performance Ubuntu can be installed directly from the Live CD to your HDD but if you only have a passing interest in checking out Ubuntu and do not want to disturb your AmigaOS installation then running from the CD is probably the easiest option. The Live Ubuntu CD and simple operating instructions will be available in the near future on the new A-EON app store which is under development.

Many new A1-X1000 owners have been keen to experiment with Linux and several have created their own Linux kernels and distributions. A1-X1000 owners Marcus and xeno74 have created a new 3.8.7 kernel to solve problems which can occur with some RadeonHD graphics cards and OpenGL-based applications like SuperTuxKart or the Android emulator.

Breaking news: Darren Stevens and Xeno74 have now both produced working versions of the 3.9 kernel. Way to go guys!!

Music to my ears

Thanks to the work of Lyle Hazlewood, our very own AmigaOS Mozart, the A1-X1000's on-board HDaudio is now at Release Candidate status. Building on the previous work of Alex Carmona, Rene' Olsen and the original AHI drivers by Davy Wentzler, the A1-X1000's on-board HDaudio driver is currently undergoing final beta testing. To celebrate the event Alex created a little boot tune which plays the original A1000's iconic boot sound on the A1-X1000 when the AmigaOS 4 splash screen is displayed during start up. 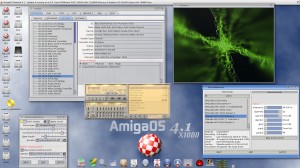 The new AmigaOS HDAudio driver should be available via AmiUpdate in the near future for all A1-X1000 owners who have registered their AmigaOS serial numbers with Hyperion Entertainment. I've been celebrating the event in my own small way by using Tunenet and AmigaAmp to play my collections of golden oldies in glorious 32-bit high definition 7.1 audio. This includes a selection of Beatles, Kate Bush, Moody Blues and Vangelis. Hmmmm! do you think I'm showing my age? Mind you I also like Adele and Shakira (purely for her music of course!)

Lyle is now turning his development talents to HDaudio recording.

Take me down to the ball game

I recently attended a (non Amiga related) business conference in San Francisco but while I was there I took the opportunity of meeting up with AmigaOS 4 beta tester Bill Bosari who is probably better known for his excellent AmiWest live web broadcasts from Sacramento each year. As usual Bill will be performing his recording duties again at the upcoming AmiWest show which is being held on October 18-20th. As with last year's show there will be a special pre-show event from the 16-18th. For more information please visit the AmiWest website.

While I was in town Bill took me down to AT&T Park to watch the San Francisco Giants play the San Diego Padres at America's favourite pastime. While we watched the game we sampled the typical baseball diet consisting of mounds of garlic fries, salted monkey nuts and enormous hot dogs all washed down with local beer.

There was no room for the cotton candy, ice cream or cheese straws let alone the burgers, pizzas, pretzels, popcorn and sandwiches which were on sale throughout the park.

A goodnight was had by all and the 42,000+ home fans went home happy as Giants won the game 3-2, scoring the winning run in the bottom of the 9th innings. After the game I experienced one of the longest firework displays I have ever seen and I'm from England, the home of Guy Fawkes and bonfire night!

I was interested to read that Microsoft is involved in another anti-monopoly dispute over unfair business practices. Given Microsoft's past history of antitrust lawsuits and dominance in the desktop OS market you might think that there is nothing unusual about that? But think again! This time it's Microsoft complaining to the European commission about Google's alleged anticompetitive business practices.

It seems that Microsoft, whose Windows 8 launch has been less than spectacular, is heading a group of 17 technology companies who claim that by giving away Android free on the condition that Smart phone manufacturers also install Google Maps, YouTube and the Google Play app store, gives Google an unfair competitive advantage. Who would have thought? With Android powered Smart-phones shipping 500 million handsets last year (69% of all phones shipped) Google is coming to dominate the mobile market. Interesting times.