Today I decided to take a look at an utility which I have overlooked since getting my X1000, because I had no idea what it is was - the utility is called Ranger. 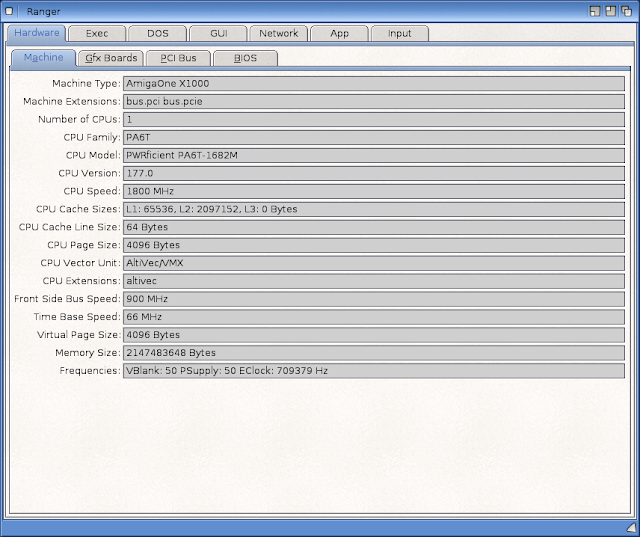 Ranger is included with AmigaOS4.1 and is written by Steven Solie. It provides a very detailed informational view of the internals of the AmigaOne X1000 hardware and also the AmigaOS4.1.6 running system information. (reminds me of System Information program under Windows XP/7) 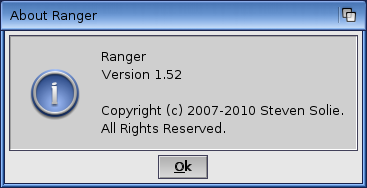 Ranger itself as included in AmigaOS4 is a few years old now (2010), so I guess it was written for the previous AmigaOne hardware like the SAM440/460 series of AmigaOne system hardware, but it is still relevant for the X1000 too.

UPDATE: There is an updated version of Ranger available on os4depot.net (I was told after this blog entry was published!) and it is being actively updated!

Next I looked the graphics boards installed (since I have two) - you can see below how detailed the information from the Radeon 9250. Interestingly doesn't show the vendor as ATI... 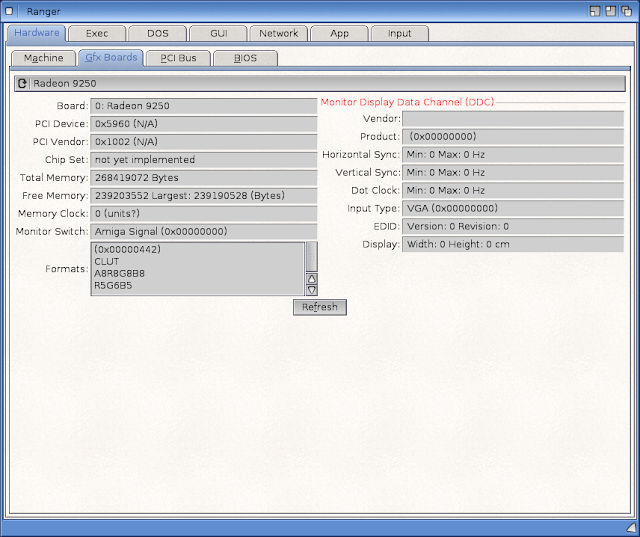 Next we can take a look at the X1000 PCI bus and BIOS, the newer version of Ranger on OS4Depot removes some of the unidentified hardware messages shown below with the actual hardware (click to expand): 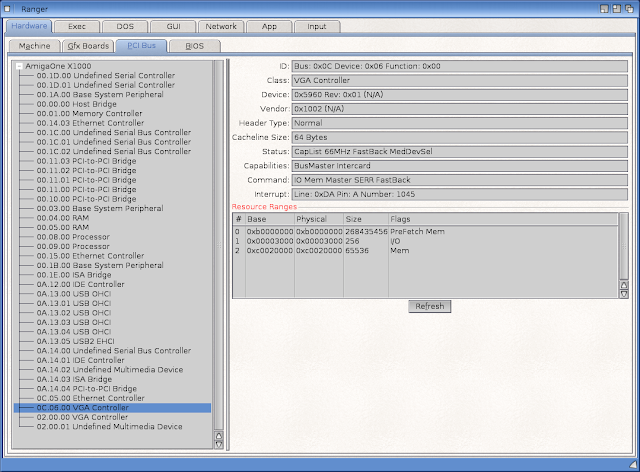 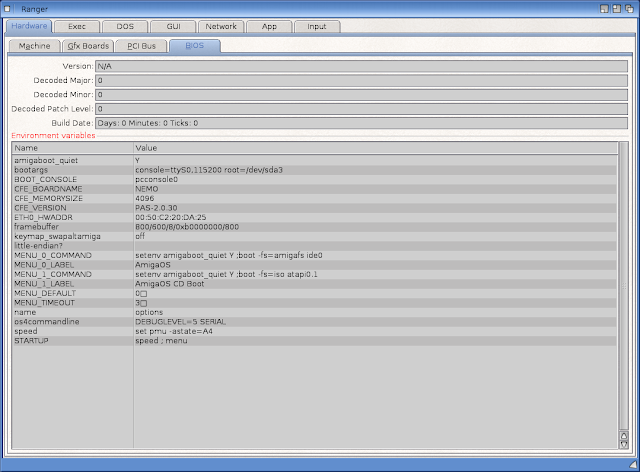 Under the Exec tab we can move onto the AmigaOS side of the Ranger information, below showing the current devices mounted: 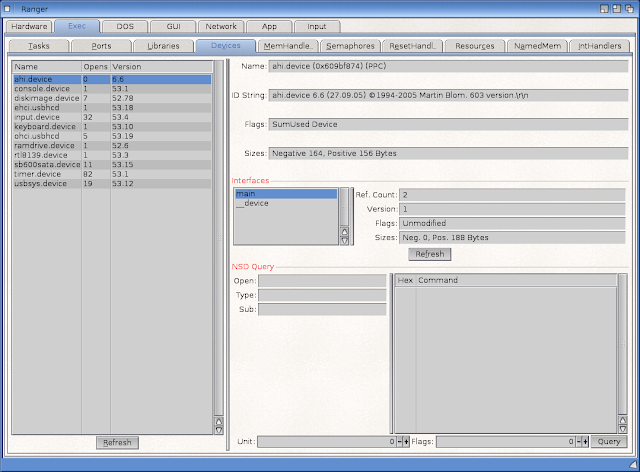 Under the DOS tab we can see the running processes. It would be great to be able to kill running processes rather than just pause them (if they are not responding), but I guess you need memory protection for that: 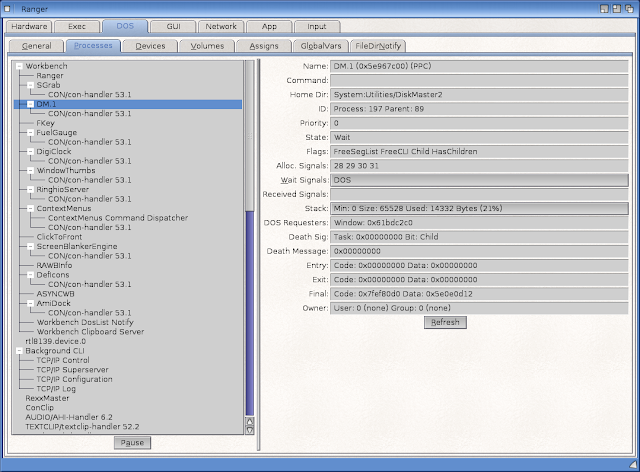 Next up is the current volumes. Only useful thing for me here is the file system type and the creation date of the volumes... 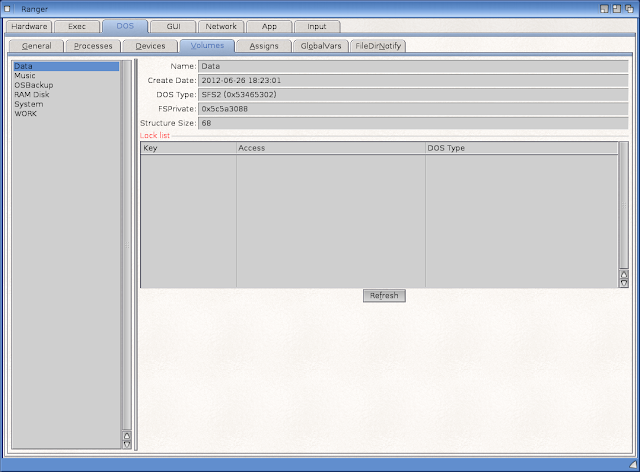 Through Ranger I can also view all current assigns running under AmigaOS4. I think this is useful to see where the assigns are currently pointing to on the hard disk: 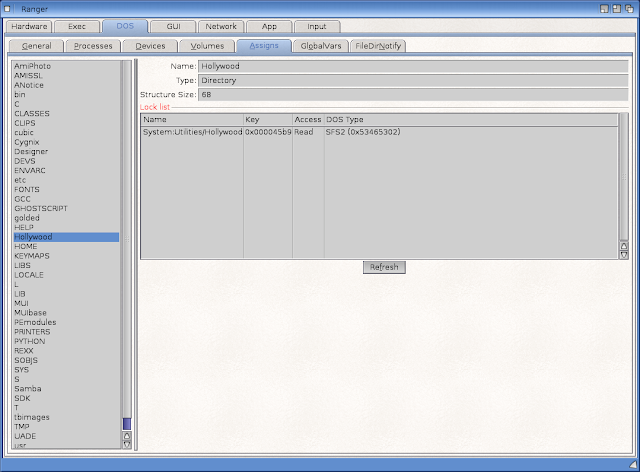 Under the GUI tab you see the current available screenmodes, showing the dual display arrangement on my X1000: 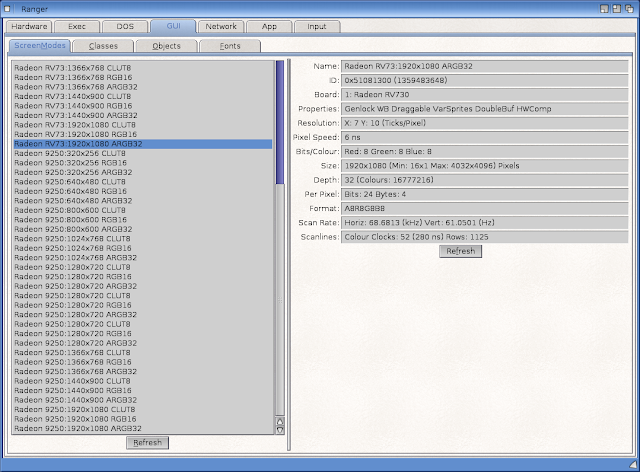 As a final part, under the Network tab you can view the network interface information too: 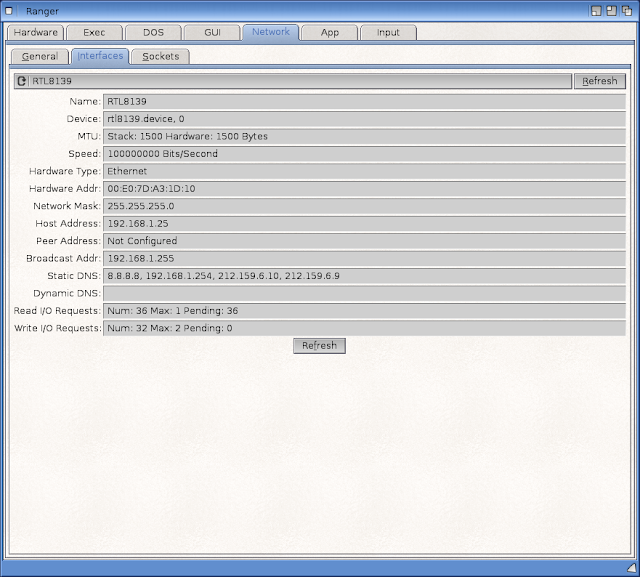 Under the sockets area it even shows my previously set up VNC listener port...

There is of course a lot more technical information available in various tabs and sections I have not included here, but hopefully it gives you an idea of what Ranger can do, and encourage you to try it out if you haven't already!