Today I continue my look at Filesysbox NTFS with SATA HD on the X1000. In this 2nd Part, I look at the Ubuntu side after swapping my new NTFS hard disk as the new AmigaOS hard disk.

If you haven't read Part 1, I recommend you do so here first.

This Part 2 continues straight on from Part 1, where I was copying my files to the new NTFS volumes on the 1TB hard disk set up in Part 1.

With the new 1TB Hard disk prepared with two AmigaOS4 partitions, one small boot partition, and all files copied across to the new NTFS Music and partitions, I then powered off the X1000, and swapped the Amiga hard disk supplied by AmigaKit with the new Hard disk.

It is important that the new disk is swapped with the original AmigaOS hard disk, as the CFE expects to autoboot the hard disk connected to that SATA port ONLY.

It is of course possible to boot AmigaOS4 off of another SATA port on the X1000, but it will not boot it by default. In that case you would also need to setup a menu item in the CFE and select it every time you boot.

I didn't want to do that - I wanted the new disk to auto boot as the default AmigaOS4. And on power up...the new hard disk worked out of the box. A screenshot of the new booted hard disk is below (Click to expand): 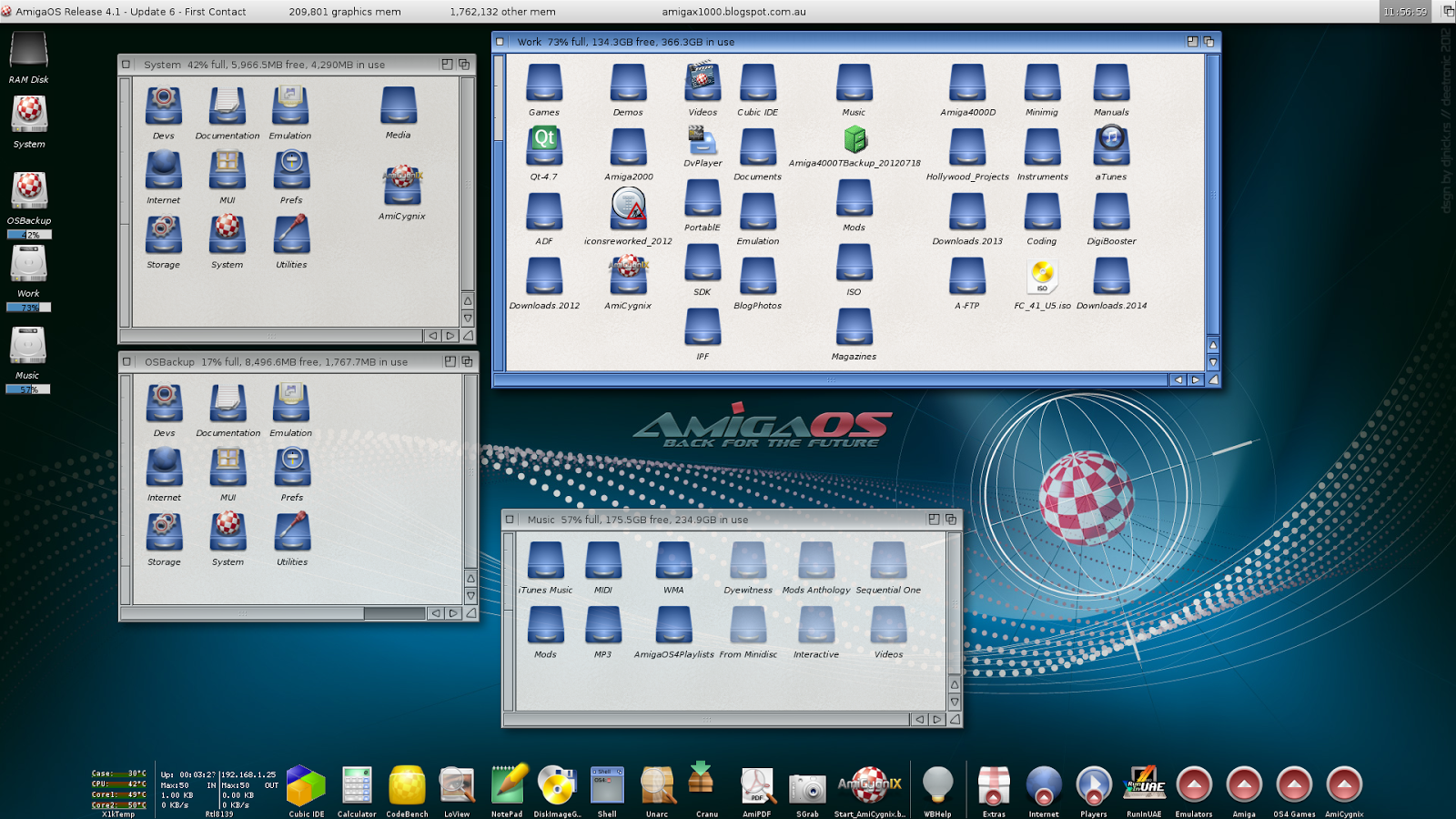 You can see the AmigaOS4 system disk, the OSBackup partition, and also the Work: and Music: NTFS volumes. Success! Here is a closer look at the two NTFS volumes: 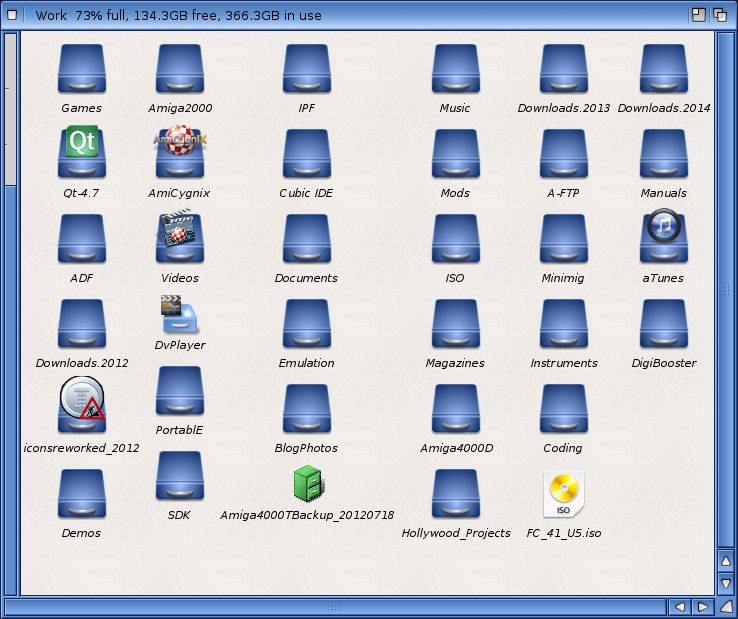 Some things I have found with having Work: on an NTFS volume. First, NTFS was implemented here using NTFS-3G file system is case sensitive. This was not expected!

I found that this case sensitive support broke AmiCygnix under AmiagOS4 on the new hard disk.

To fix this, I moved the AmiCygnix folder from Work: (NTFS) to System: (SFS2). I then edited the s:User-startup file to change the Cygnix: assign to the new location in System:AmiCygnix. After that, AmiCygnix worked fine.

I expected this may happen, which is why I allowed extra space (10GB) on the System: partition so that AmiCygnix, SDK, QT and GoldEd could be moved there.

There wasn't enough room on the AmigaKit partitioned 2GB AmigaOS4 on the original hard disk for these large installations, which is why it was installed in Work: originally.

Also note that m3u music playlists created under AmigaOS4 don't work under Ubuntu (and vice versa), due to the different folder structures and conventions. To resolve this I now have two folders under the Music: partition, one for AmigsOS4 playlists and one for Ubuntu playlists...

There may be effects on other programs too - I found some weird issues with the BETA version of Dopus3.9 copying stuff to the NTFS partitions for example. I will keep testing...

Once booted into Ubuntu, both NTFS partitions Work: and Music: were available with read/write access immediately on boot up, with no configuration needed at all! Fantastic!

Here is the Work: NTFS partition mounted under Ubuntu: 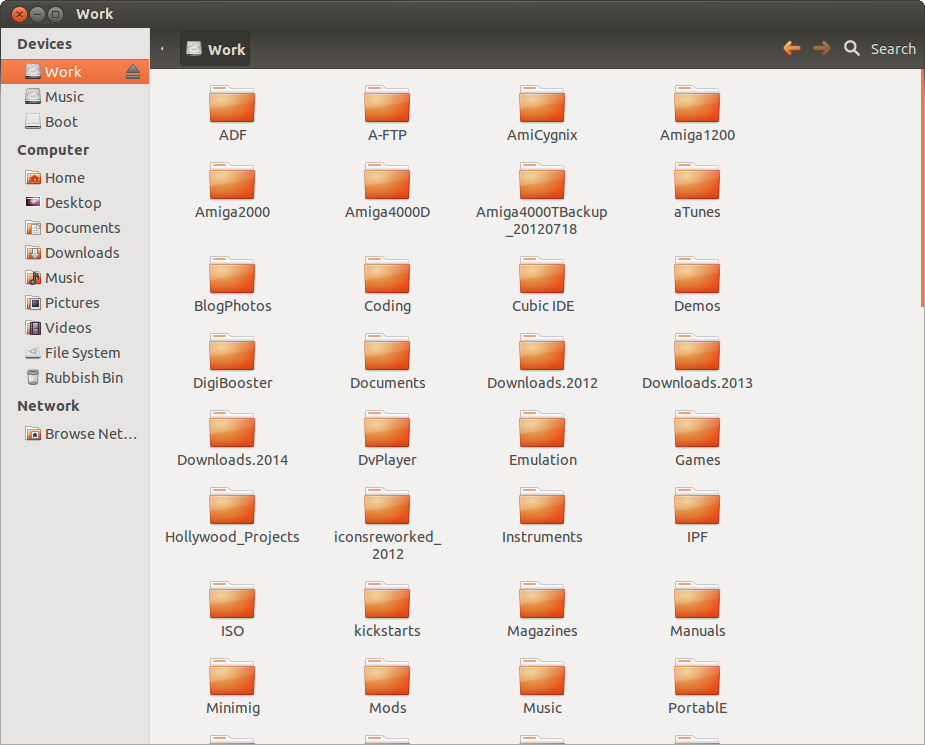 Next is the Music: NTFS partition, shown under Ubuntu. 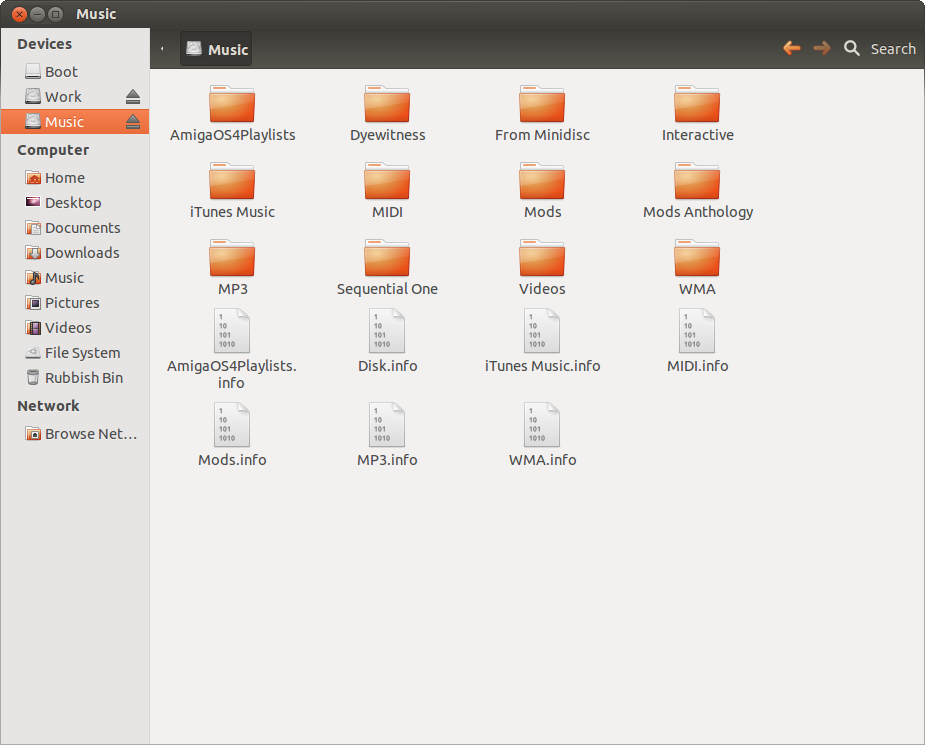 I next tried playing a module located on the NTFS Music: partition which worked well (click to expand): 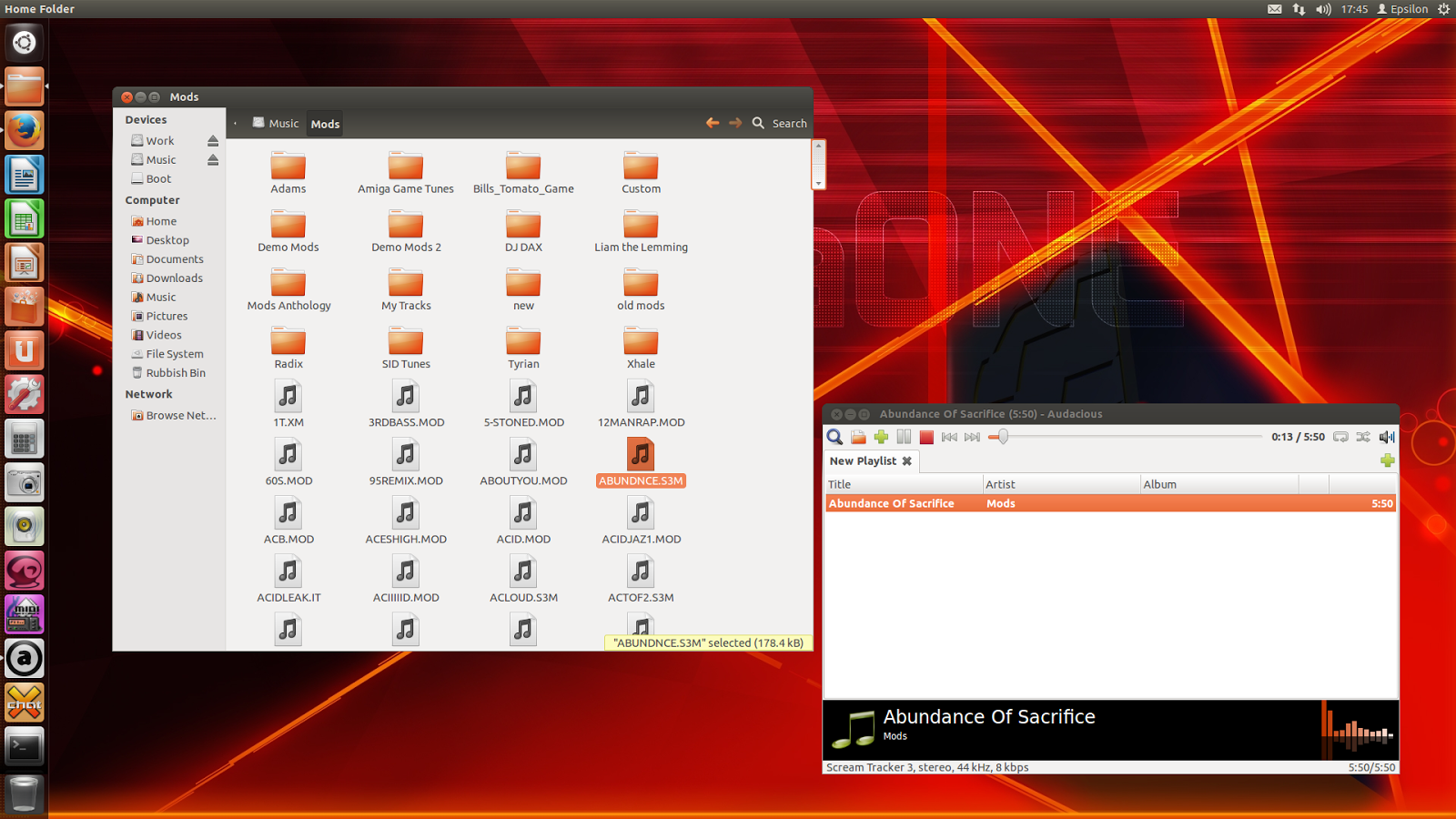 I was very happy that this worked exactly how I had planned it to!

I then started copying my music, pictures and video files from the Ubuntu system partition (as they were more recent) to the shared Music drive. Once finished I could delete the music from the Ubuntu partition as it is no longer needed there!

While waiting for this copy to finish I listened to some of Radix's wonderful modules from the NTFS Music: partition, and I opened an Amiga 500 PDF manual from the Work: NTFS partition in Ubuntu (click to expand): 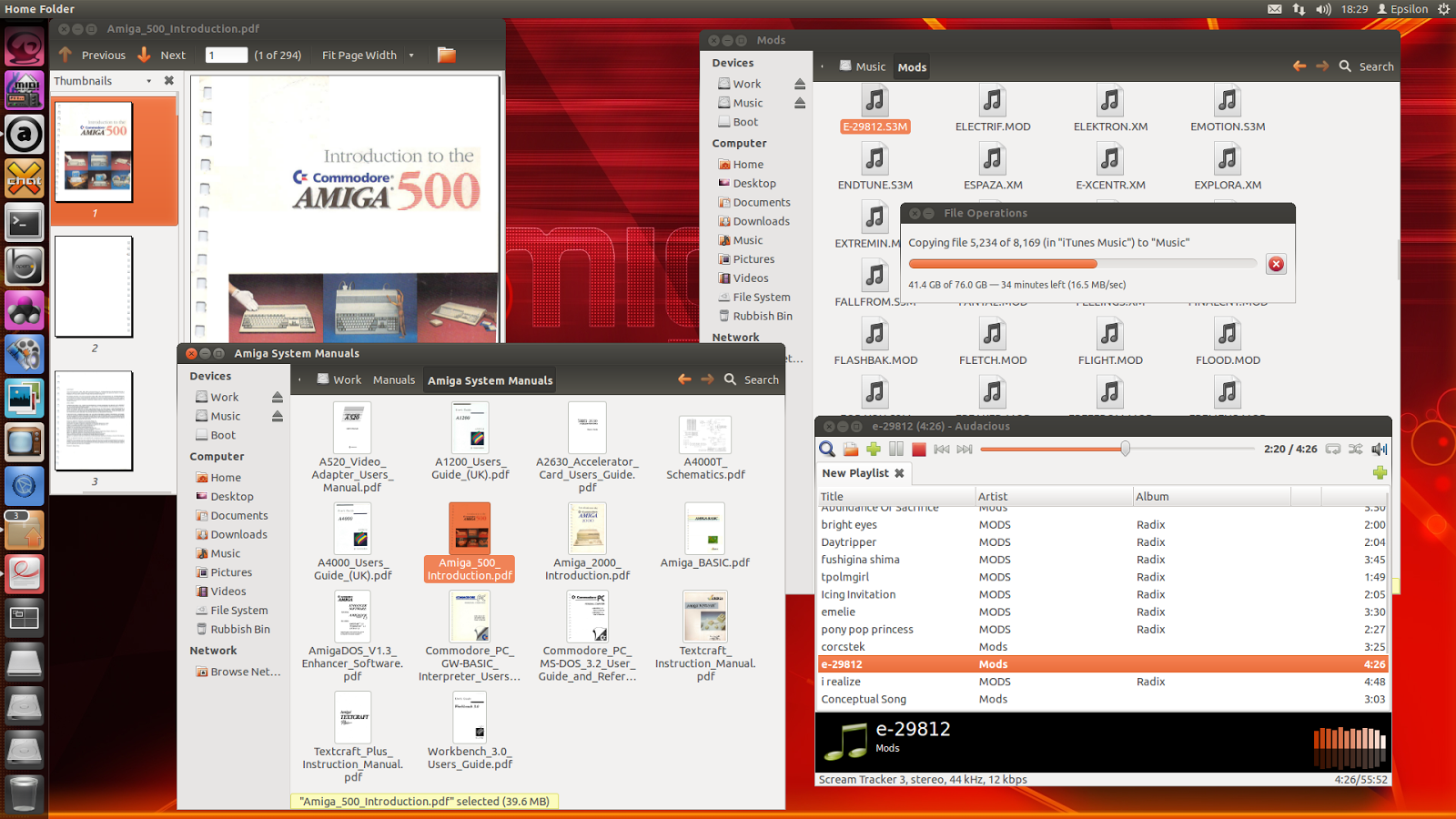 I then played some MP3's from the NTFS drive on the AmigaOS4 side while web browsing and playing back a video on the NTFS partition which worked perfectly (click to expand): 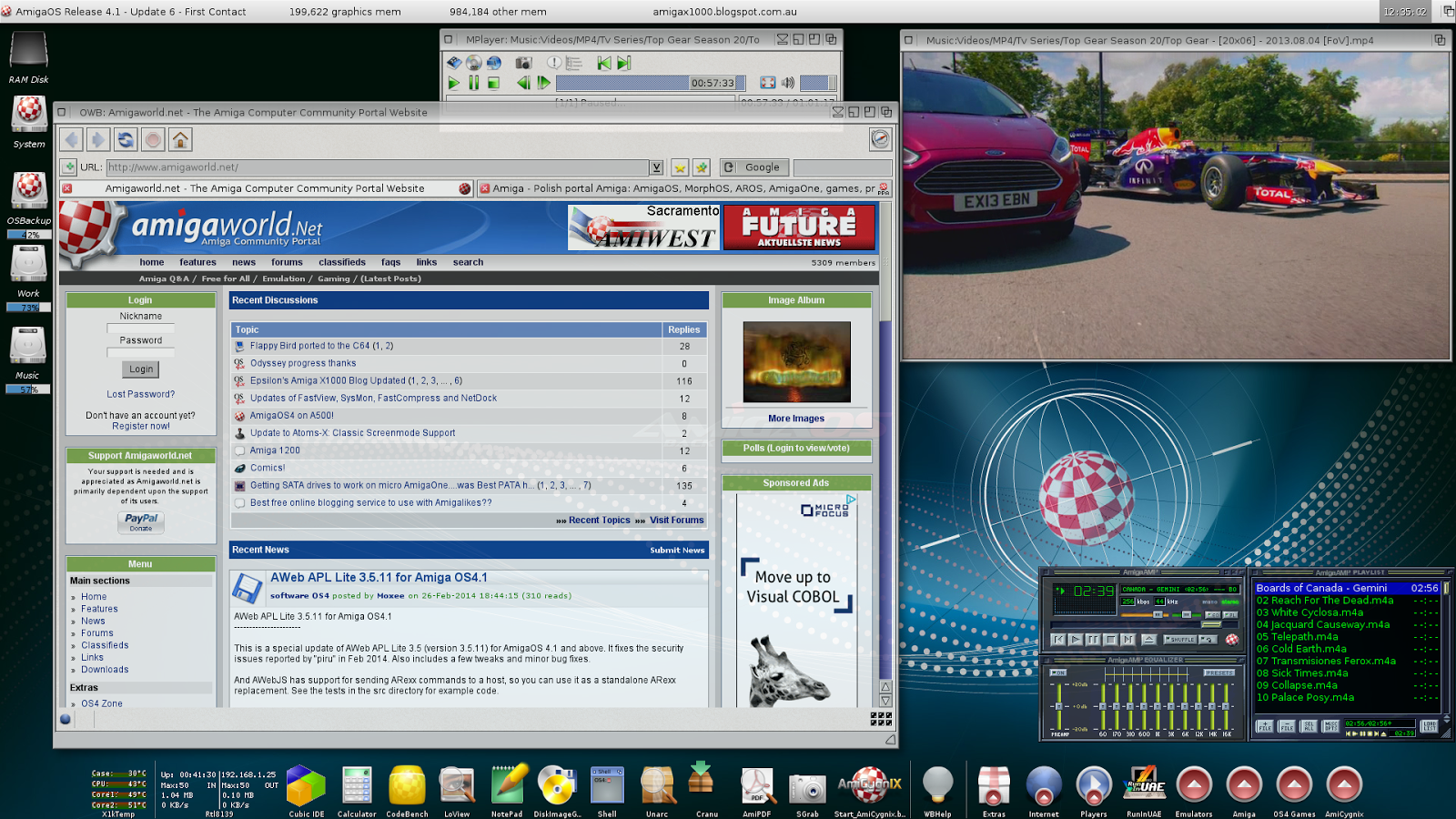 As you can see, the new Filesysbox NTFS partition support opens up a very convenient way to share data on NTFS partitions between AmigaOS4 and Ubuntu (or indeed any other Linux distributions that support NTFS-3G) on the X1000. As mentioned in Part 1 FileSysbox NTFS support is available for free for registered X1000 owners from AmiUpdate.

There is a bit of work involved in setting it up under AmigaOS4 for fixed hard disk NTFS partition support (as I have detailed here and in Part 1), but I believe the result is worth the effort!

The NTFS support is not limited to fixed SATA hard disks, and indeed works for NTFS formatted USB connected hard disks as well. I have not needed this so far and have not tried it, but it is good to know it is there if I need it!

I would like to take this opportunity to say thank you very much to the developers who made this NTFS support happen under AmigaOS4 - it solved a big issue for me sharing common files between multiple operating systems on the AmigaOne X1000.

I also learnt a lot of things about the AmigaOne X1000 and filesystems in the process of setting it up!