Finally my Amiga 600 arrived today in the post, along with the spare keyboard I bought for it! I was very keen to muck around with it! 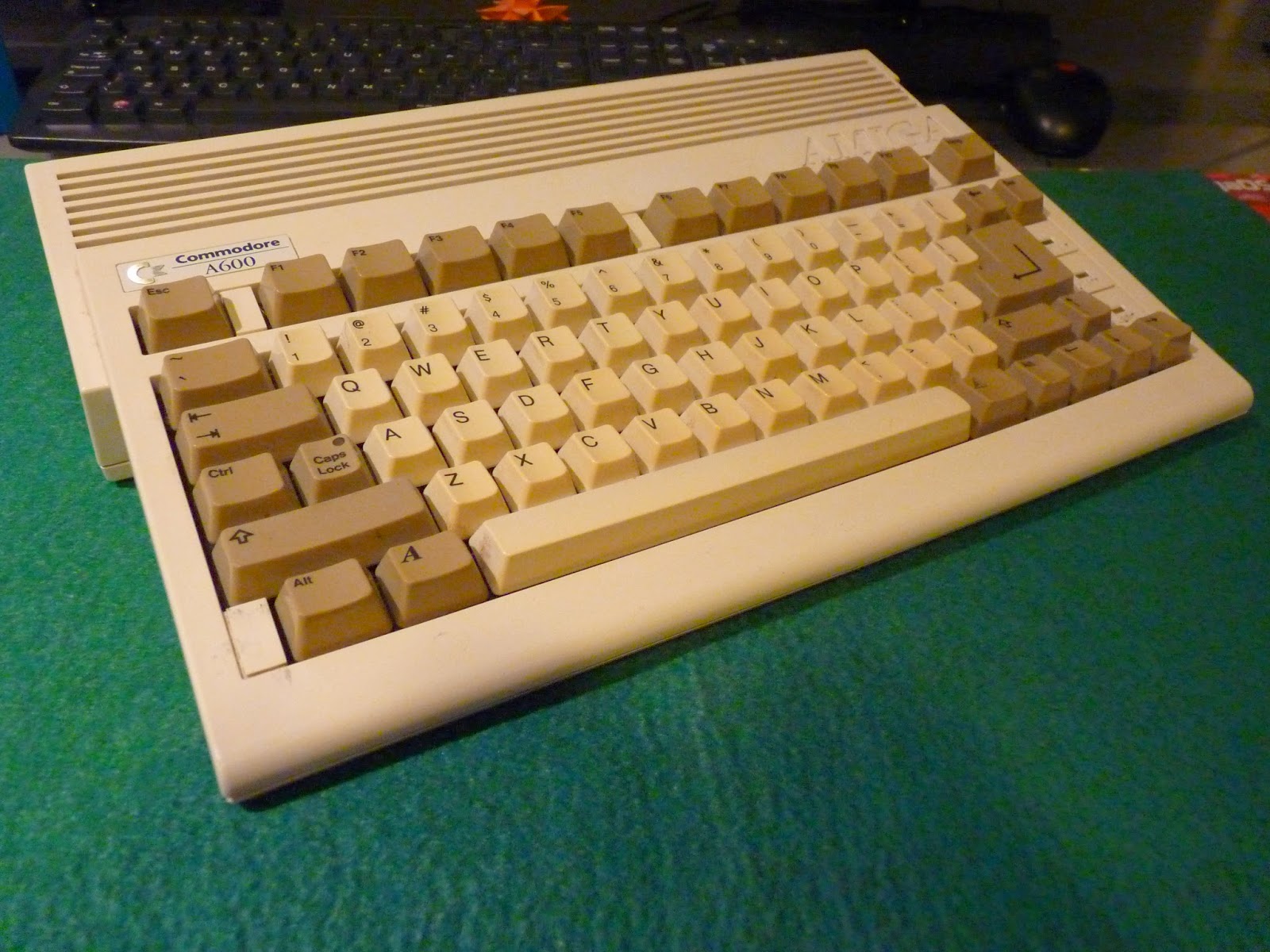 This Amiga 600 is almost completely standard, with no extra memory cards, upgrades or hard disks installed.

Below is the view of the left hand side of the Amiga 600, showing the PCMCIA slot. 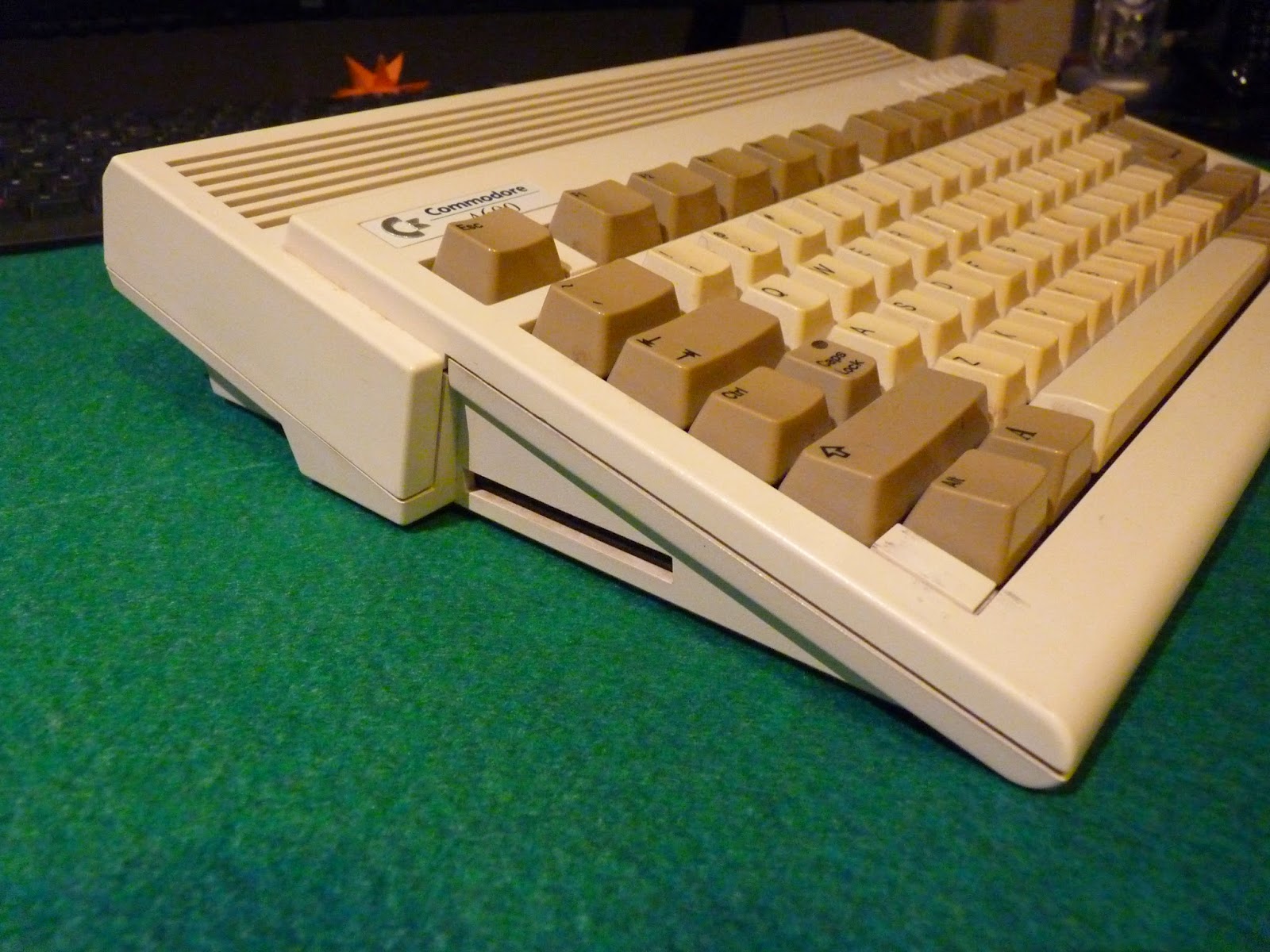 On the right hand side you can see the Floppy drive, mouse and joystick ports, and the light indicators for power, floppy and hard disk activity. 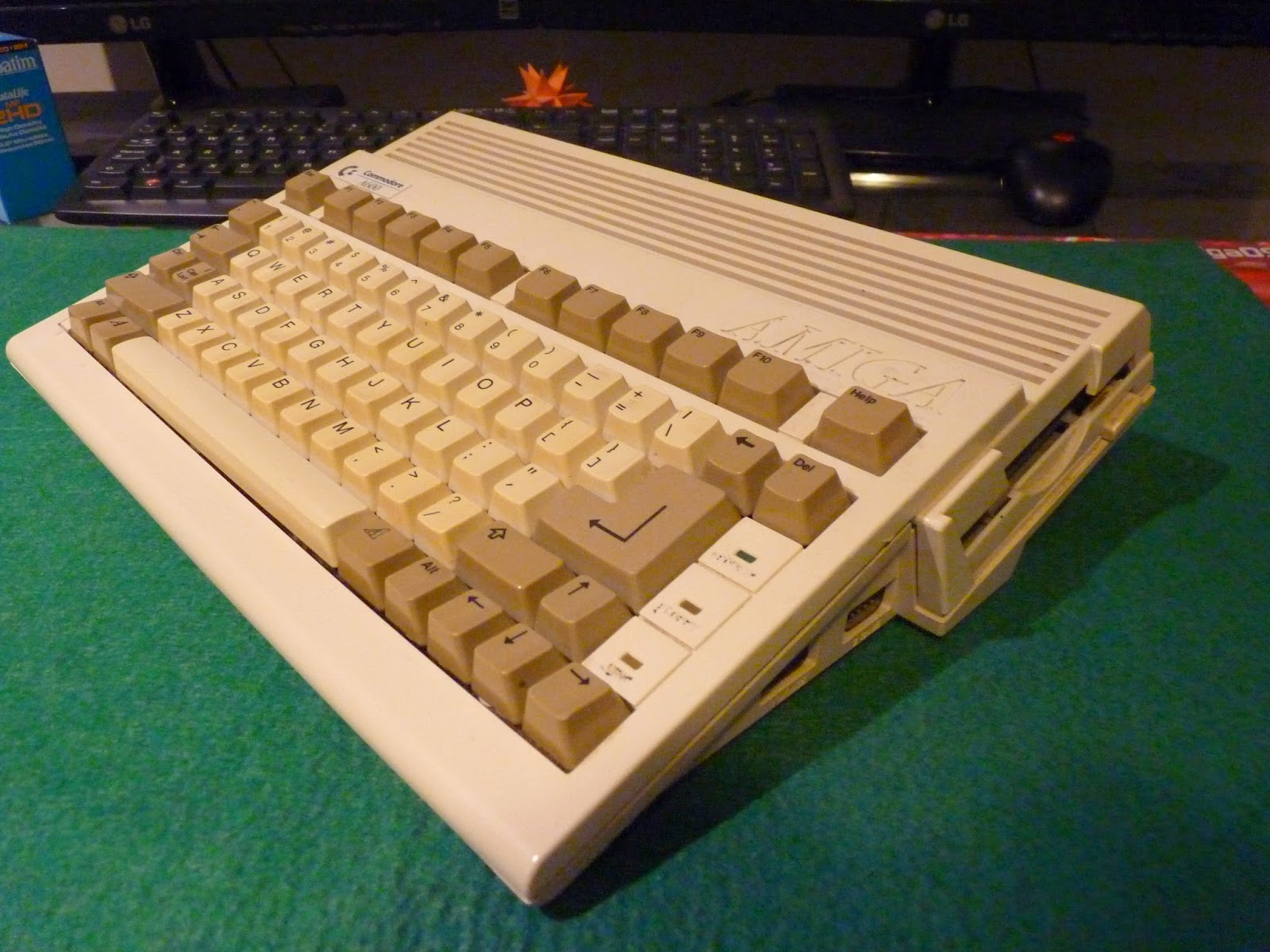 Moving to the back, you can see the Disk Drive, Serial, Parallel, RCA Audio, Video, AV, RF and Power ports. 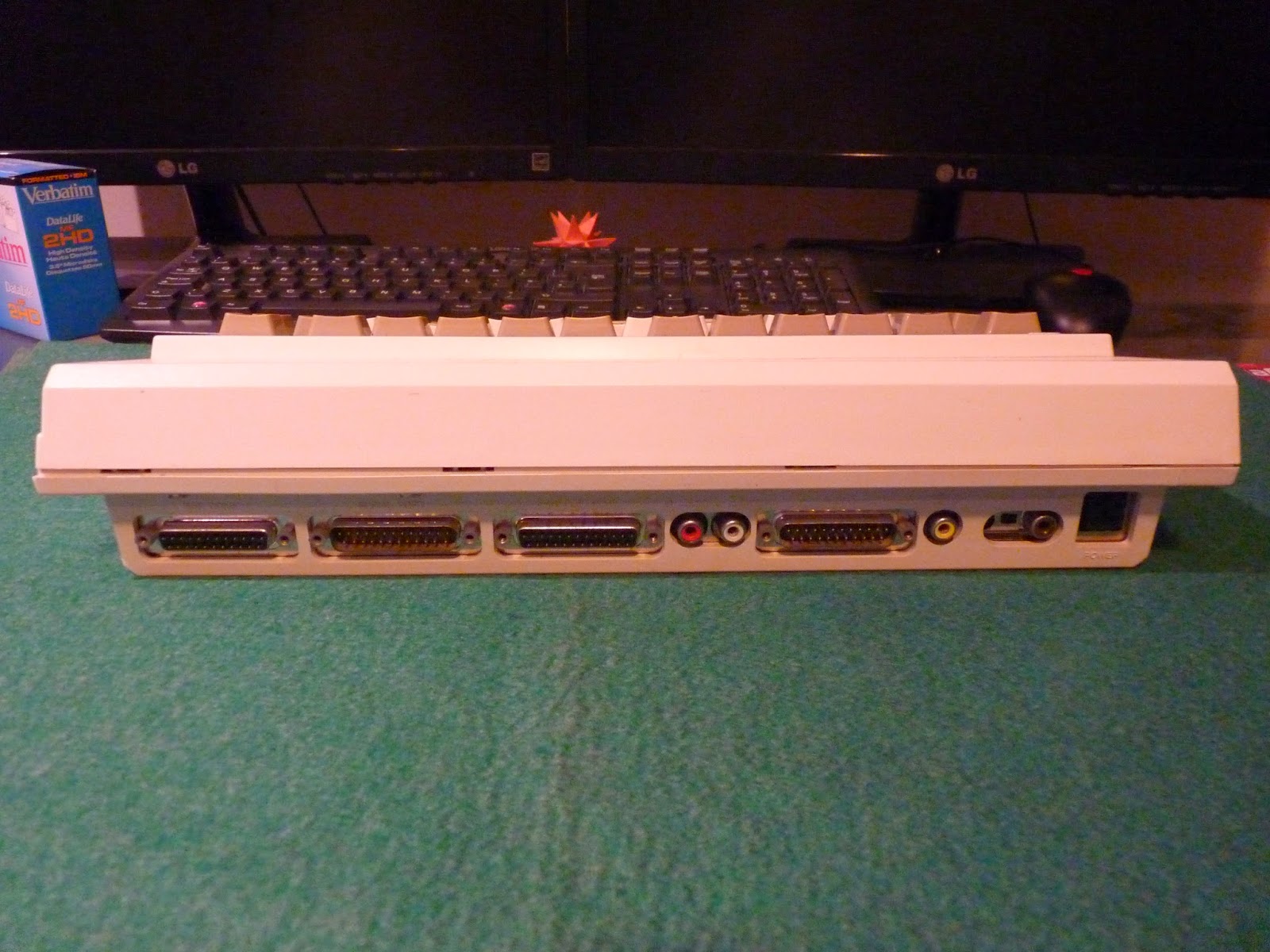 The Amiga 600 was the first Amiga to have an AV out port built in. The RF out port was for older TV's lacking an AV port. In this day and age of course we have HDMI and AV ports, with RF still there too! 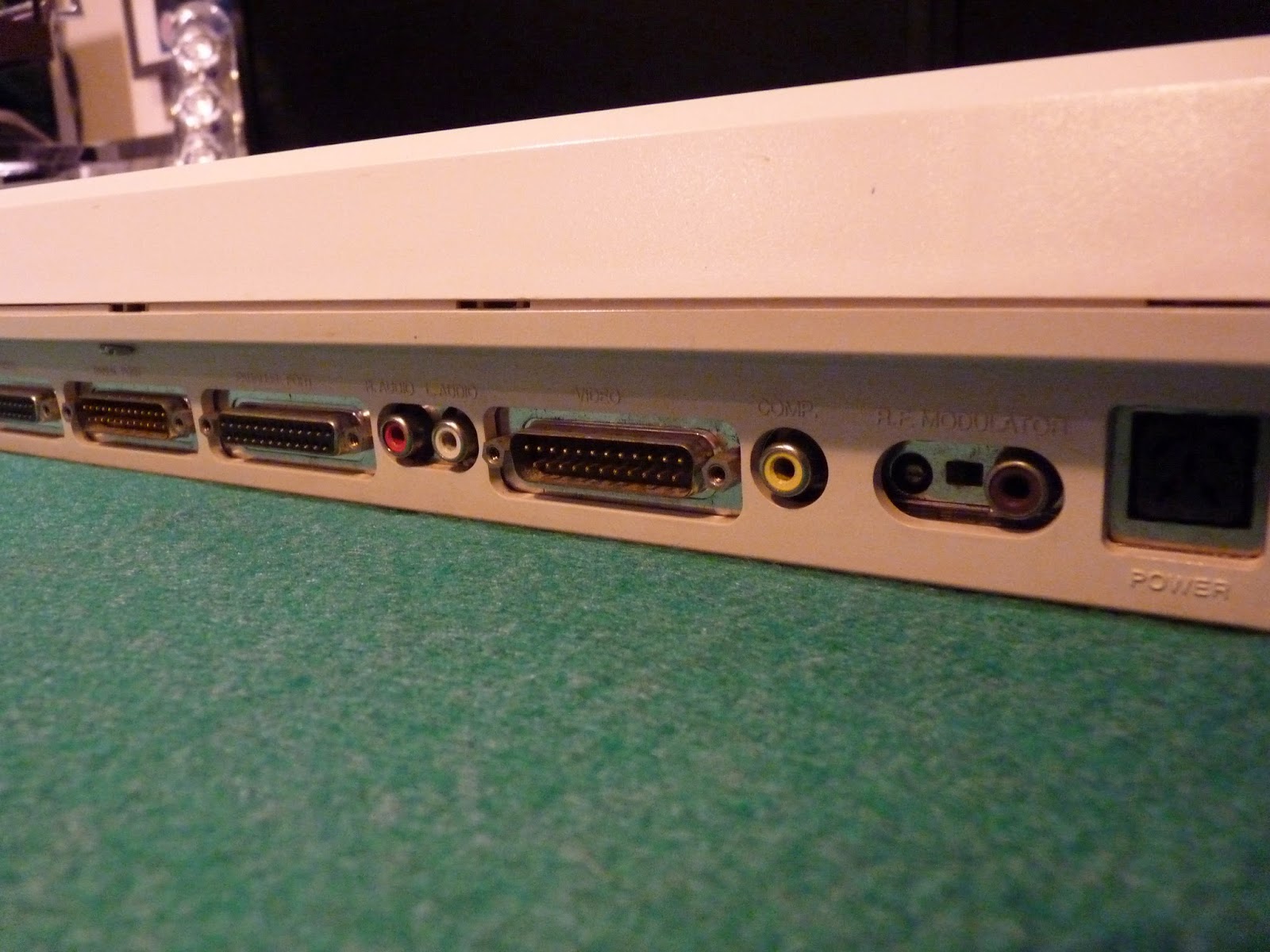 Turning the Amiga 600 over, we can see the expansion bay cover on the left and vents for letting heat out of the case. 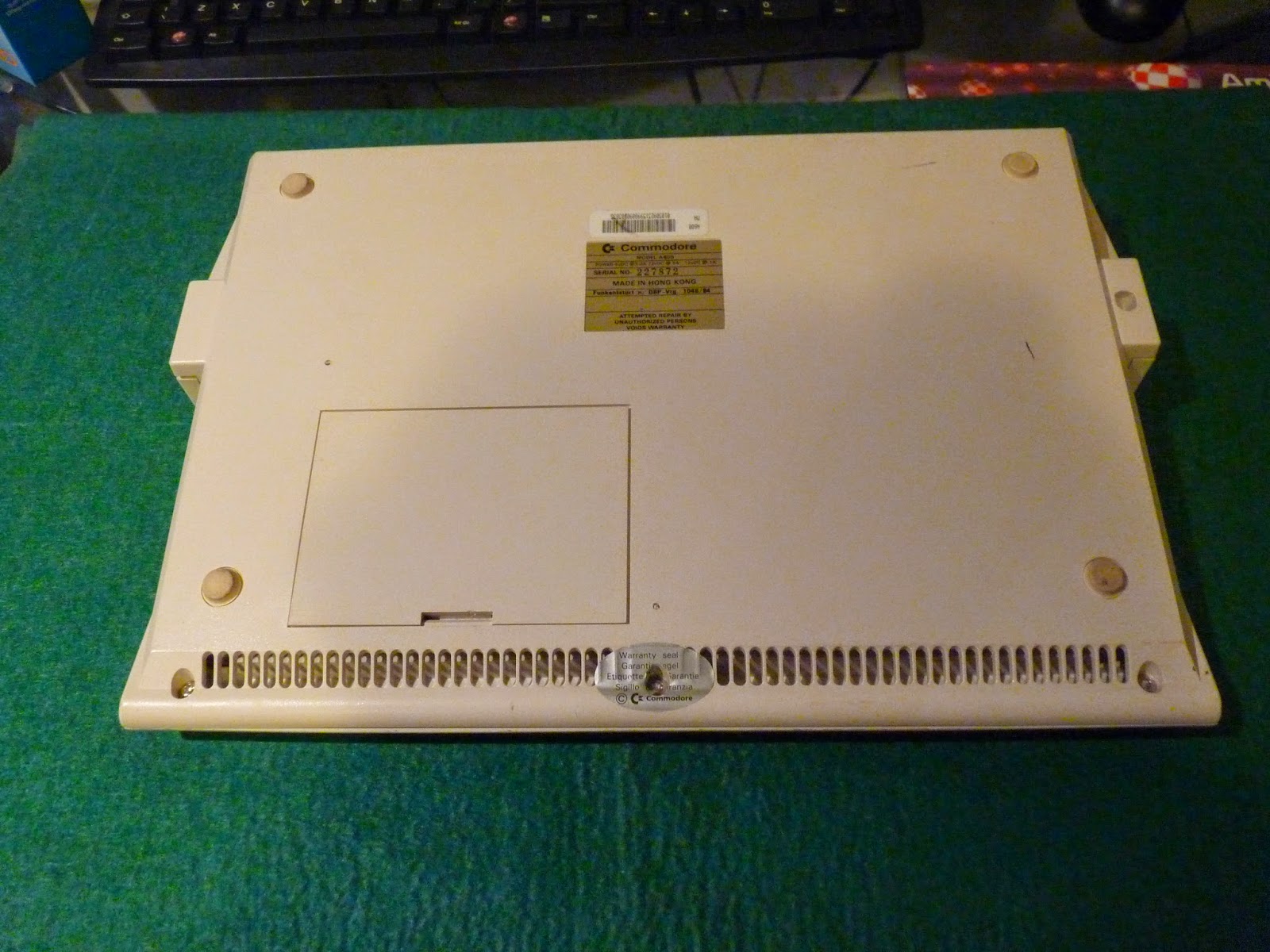 You can open the expansion bay using a flathead screwdriver or a suitable coin, revealing the expansion port (as shown below) which can only be used for Amiga 600 specific expansion cards.

If you look closely you can see the serial number and the "Made in Hong Kong" on the silver label. 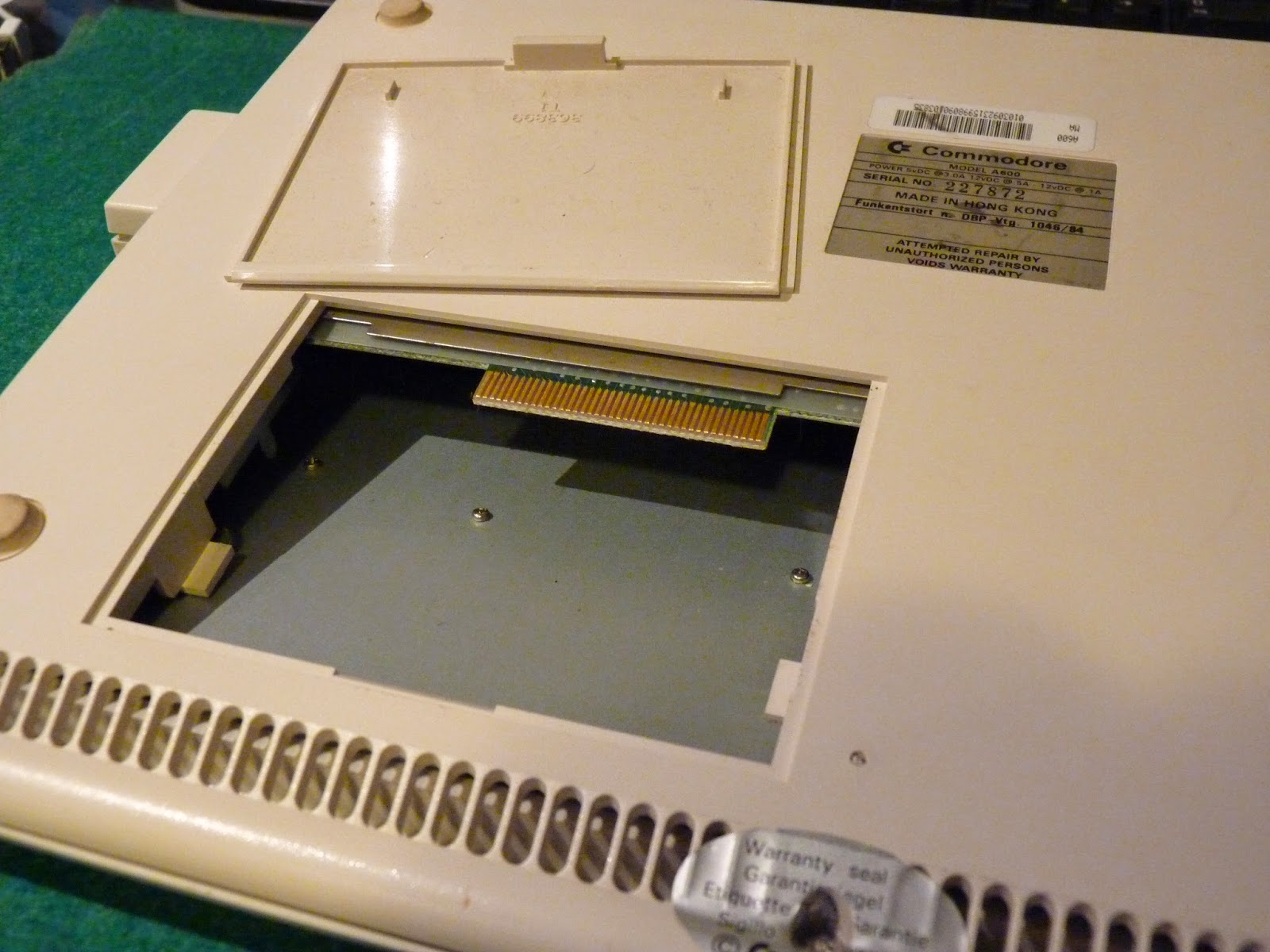 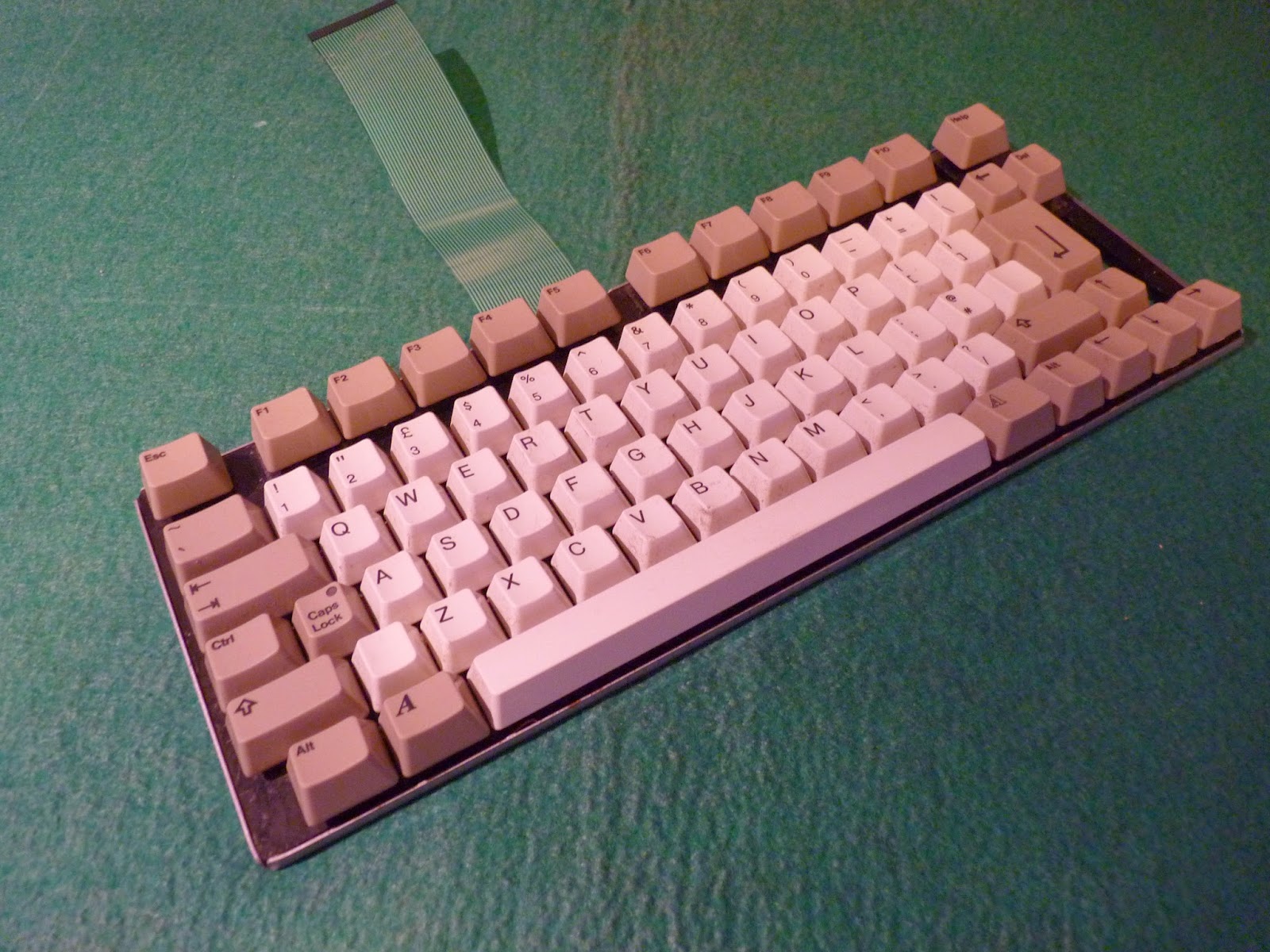 I also received the standard Amiga 600 manuals with the machine: 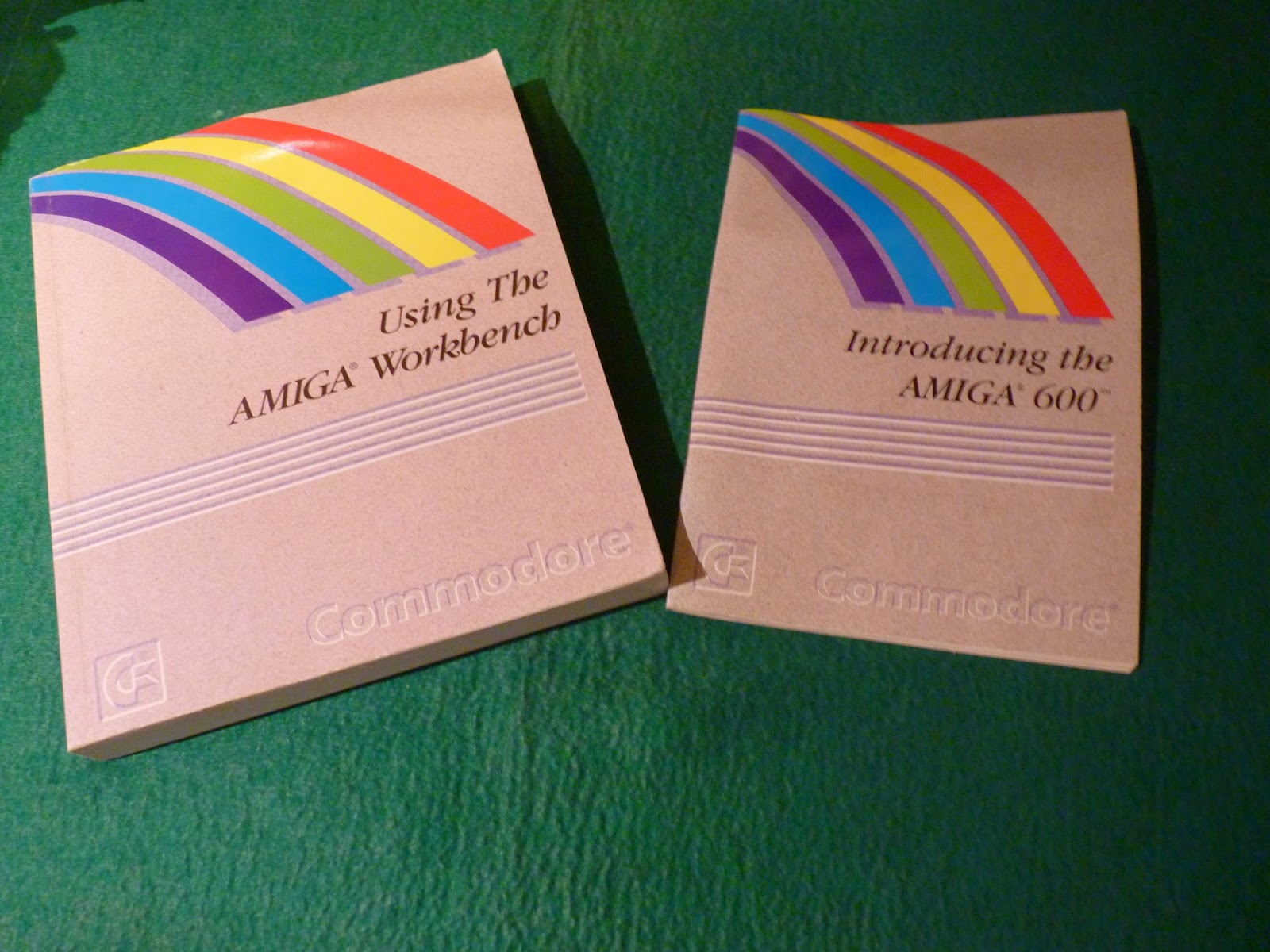 So before I go any further with the initial clean, I want to make sure it works. Because this is a standard Amiga 600 (not upgraded yet) and I don't have a TV in my computer room, I need an external scan doubler to plug into the Amiga 600's video slot, which can then be connected to a TFT monitor via VGA cable.

I bought this external scan doubler below back in 1998, and it is still working well: 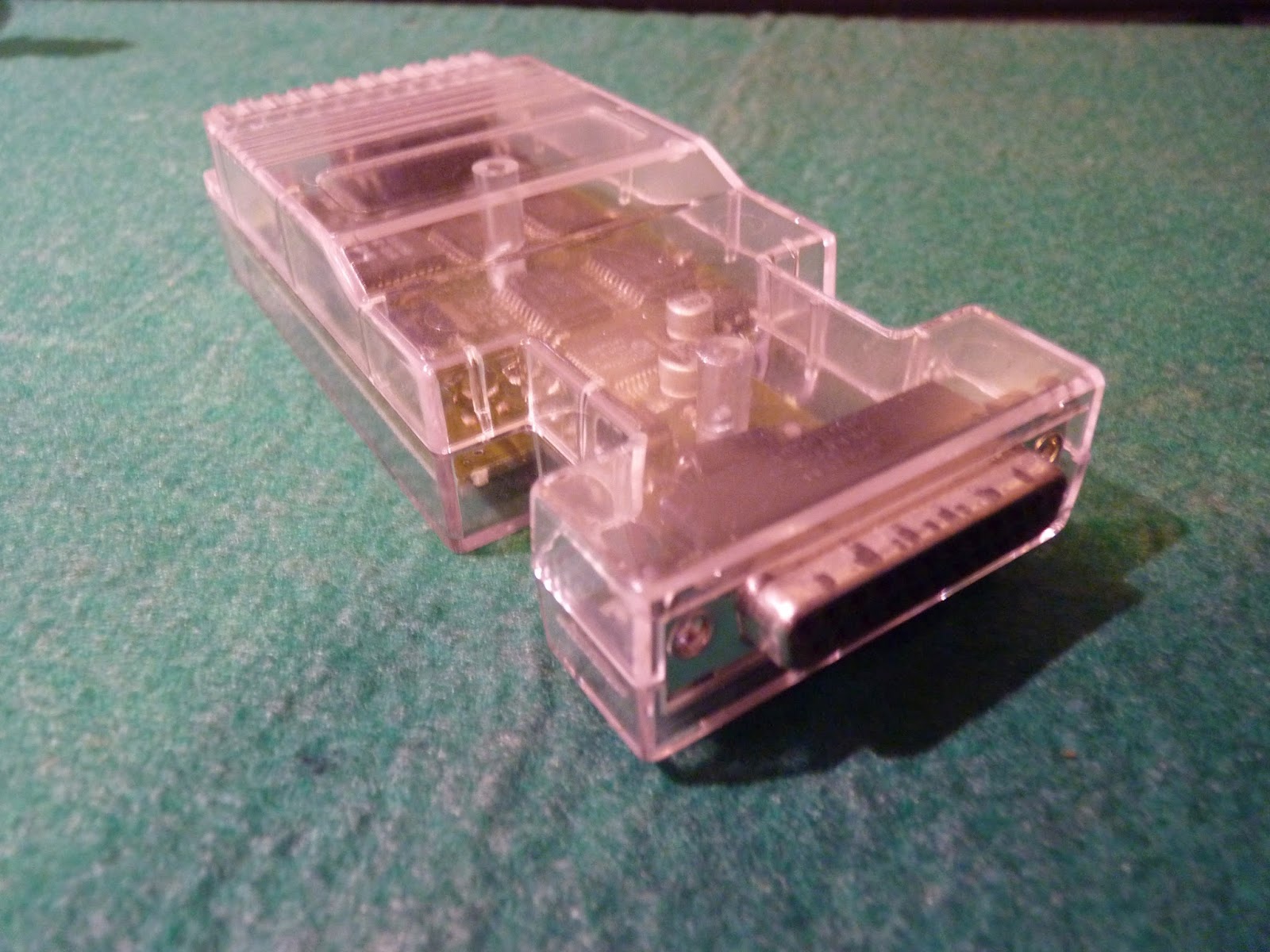 The scan doubler also has a inbuilt flicker fixer, which is great for interlace (flickering) screen modes on the Amiga 600. 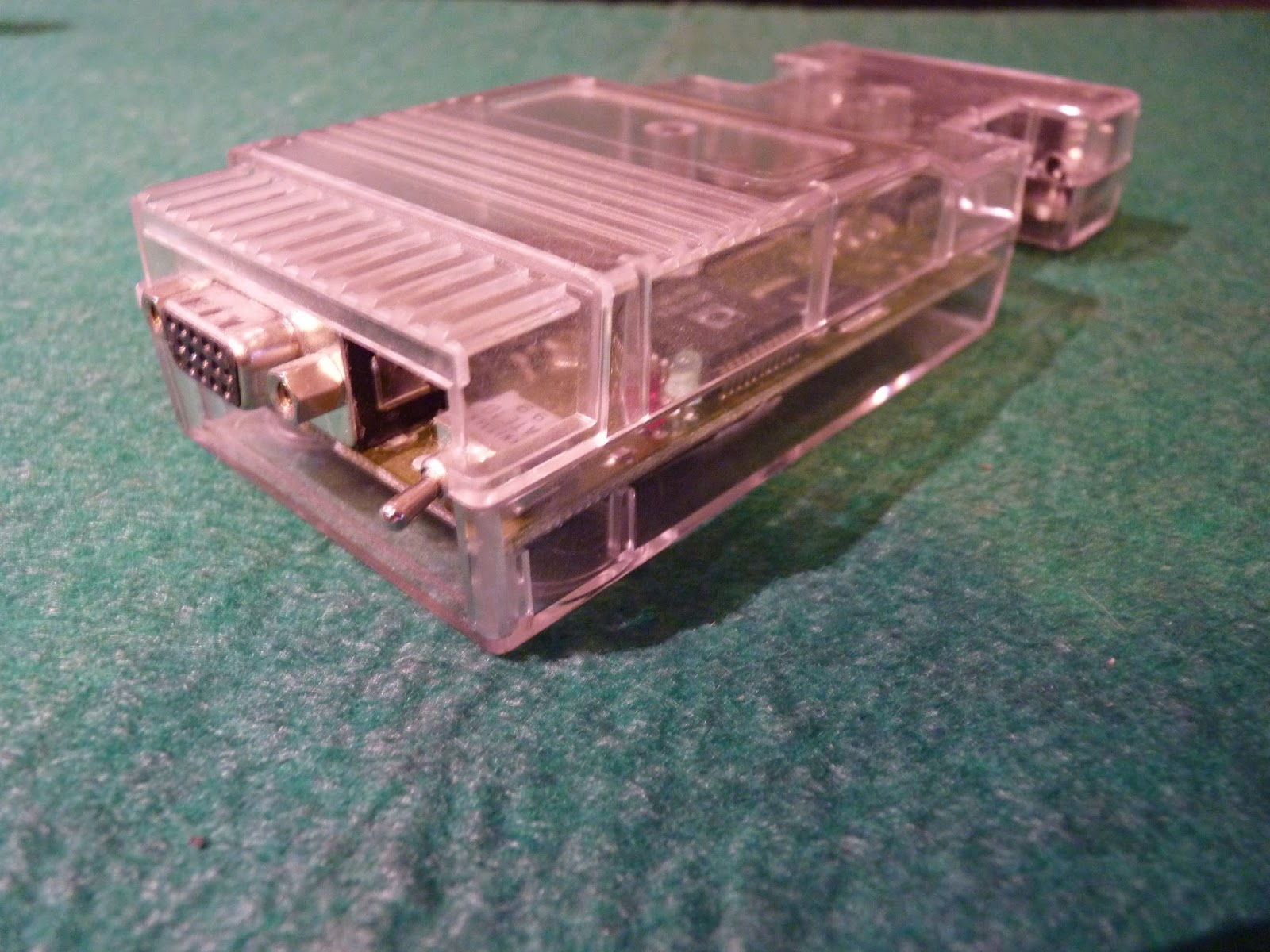 The scan doubler is needed because a VGA monitor requires a minimum input of 31Hz to display anything. By default the Amiga outputs 15Hz from the video port, which is compatible with analog televisions available at that time.

The scan doubler doubles the output signal from the Amiga video port to the VGA standard 31Hz so it is possible to use a standard VGA TFT monitor to display. Having this means I don't need the old Amiga 1084S/1940/1960 CRT monitors, which are old, fragile, heavy and use a lot of space. 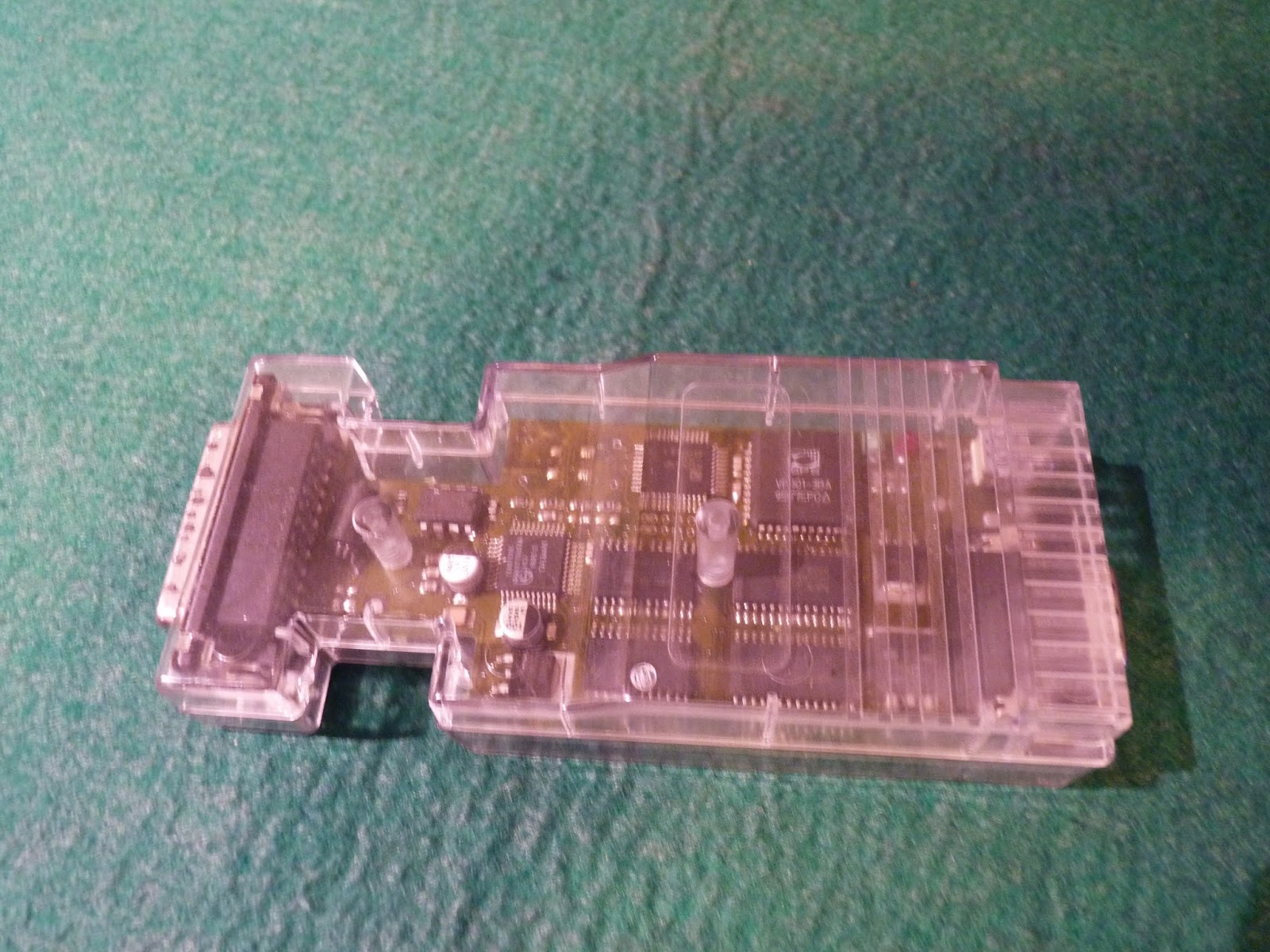 A similar result is achieved by installing an Indivision ECS expansion inside the Amiga, but that is a job for later. First I want to test it out.

Below is the Amiga 600 connected up, scan doubler attached to a TFT VGA screen, and powered on. 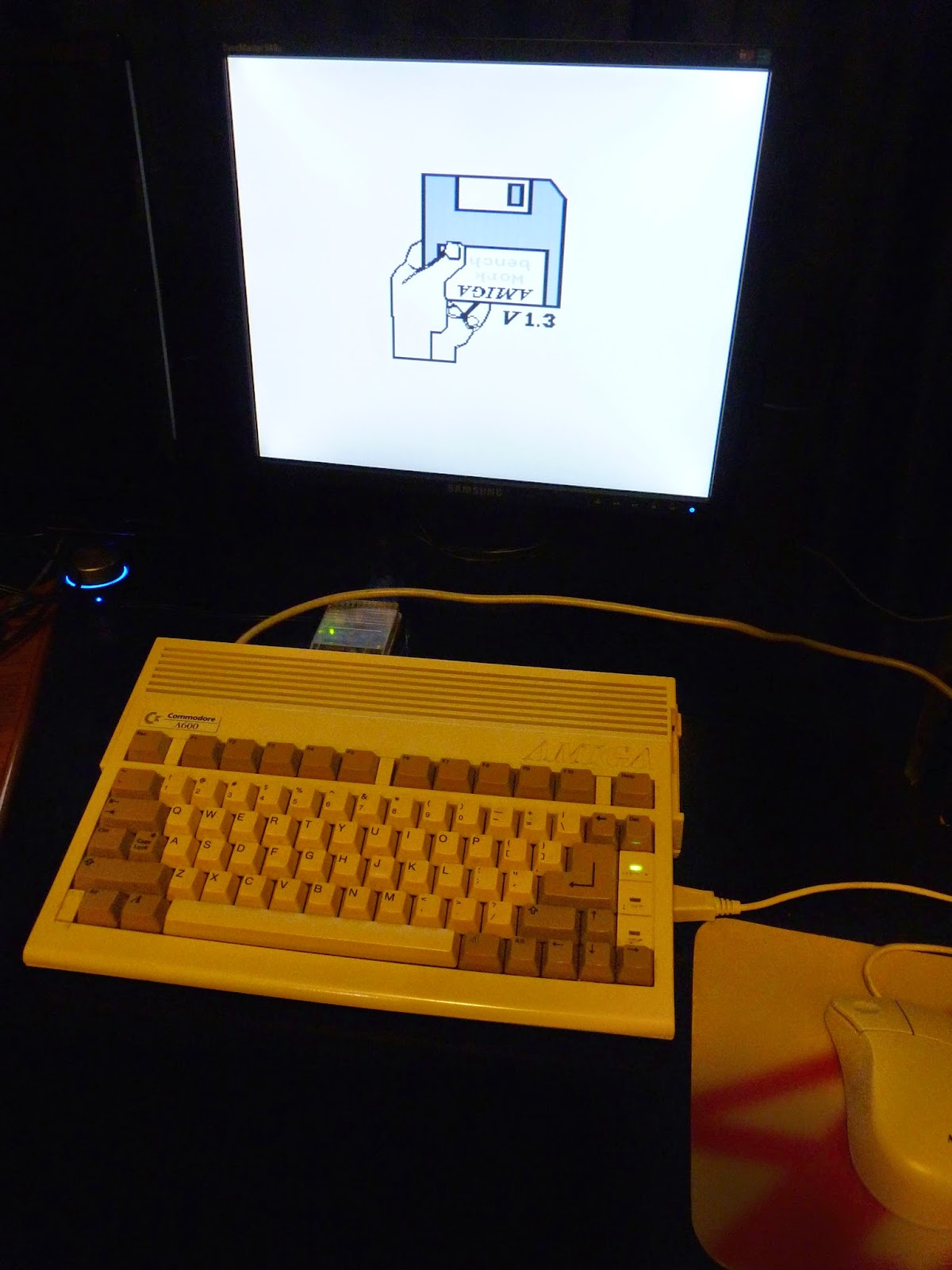 As a surprise this Amiga 600 has had the default Workbench 2.05 ROM chip replaced with an Amiga 500 Workbench 1.3 ROM chip! This is why we see the old Amiga 500 V1.3 hand holding the disk prompt, rather than the v2.05 insert disk screen.

Fortunately I have v3.1 and 2.1 ROMS (and a ROM switcher) for the Amiga 600 from previous projects to install in this later. For now I located an original Workbench 1.3 disk, which booted perfectly to Workbench 1.3 as shown below: 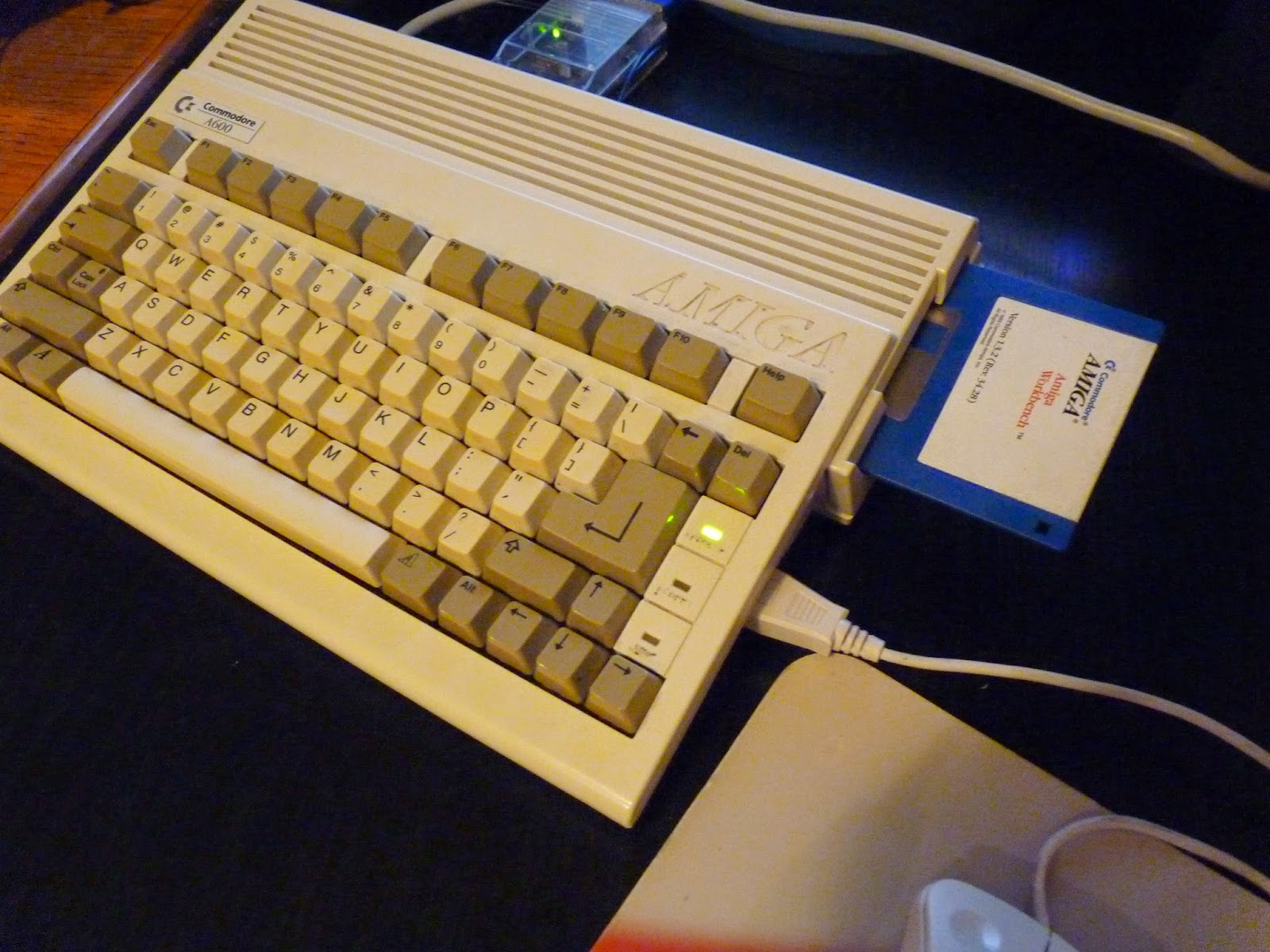 The mouse included with the Amiga 600 (and shown in the photos) has a faulty left mouse button, but I have a spare new one so no problems to swap it out later: 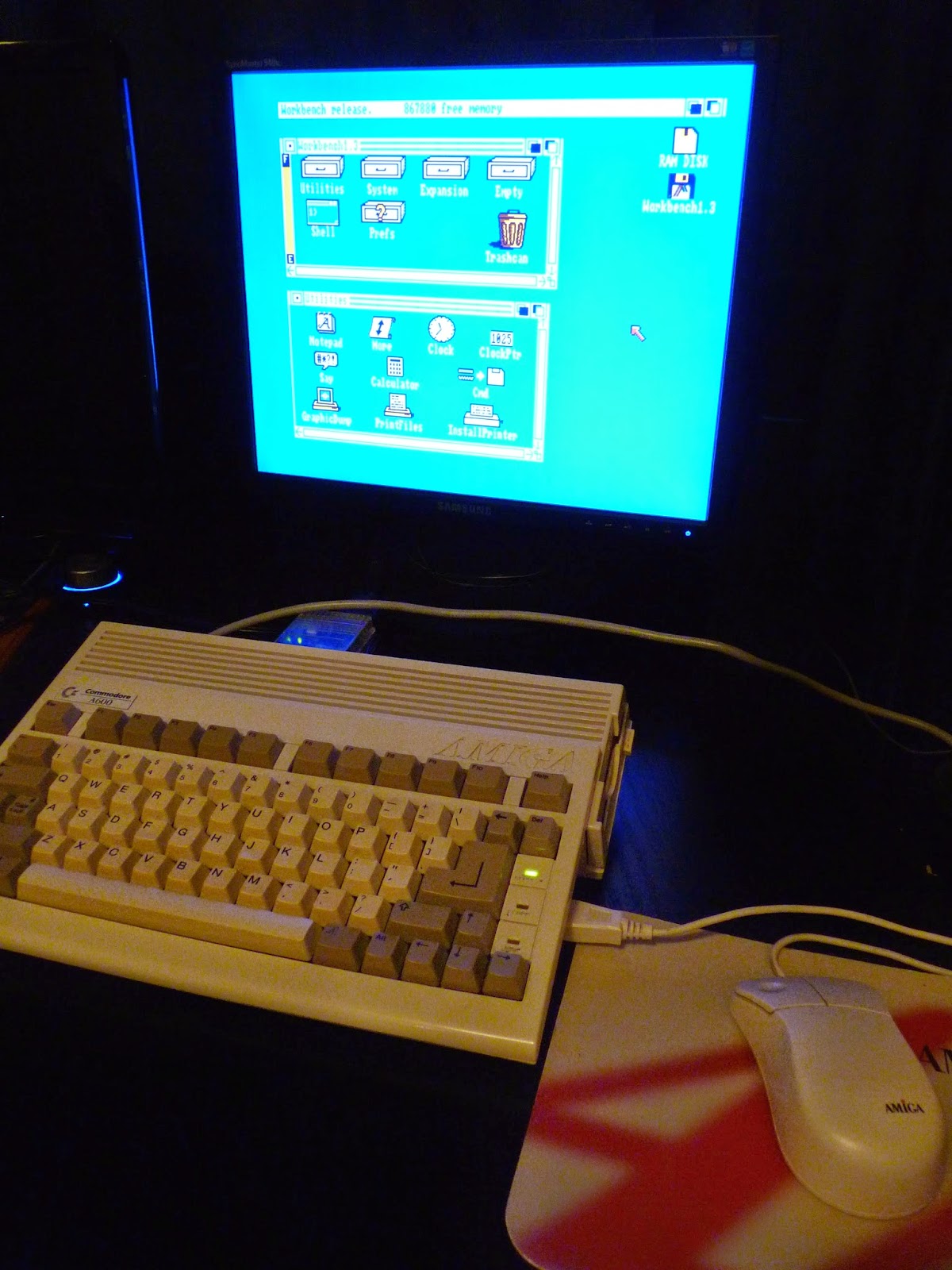 You can see below that the Amiga 600 has just the standard 1MB RAM included with it, minus the memory needed to boot into Workbench: 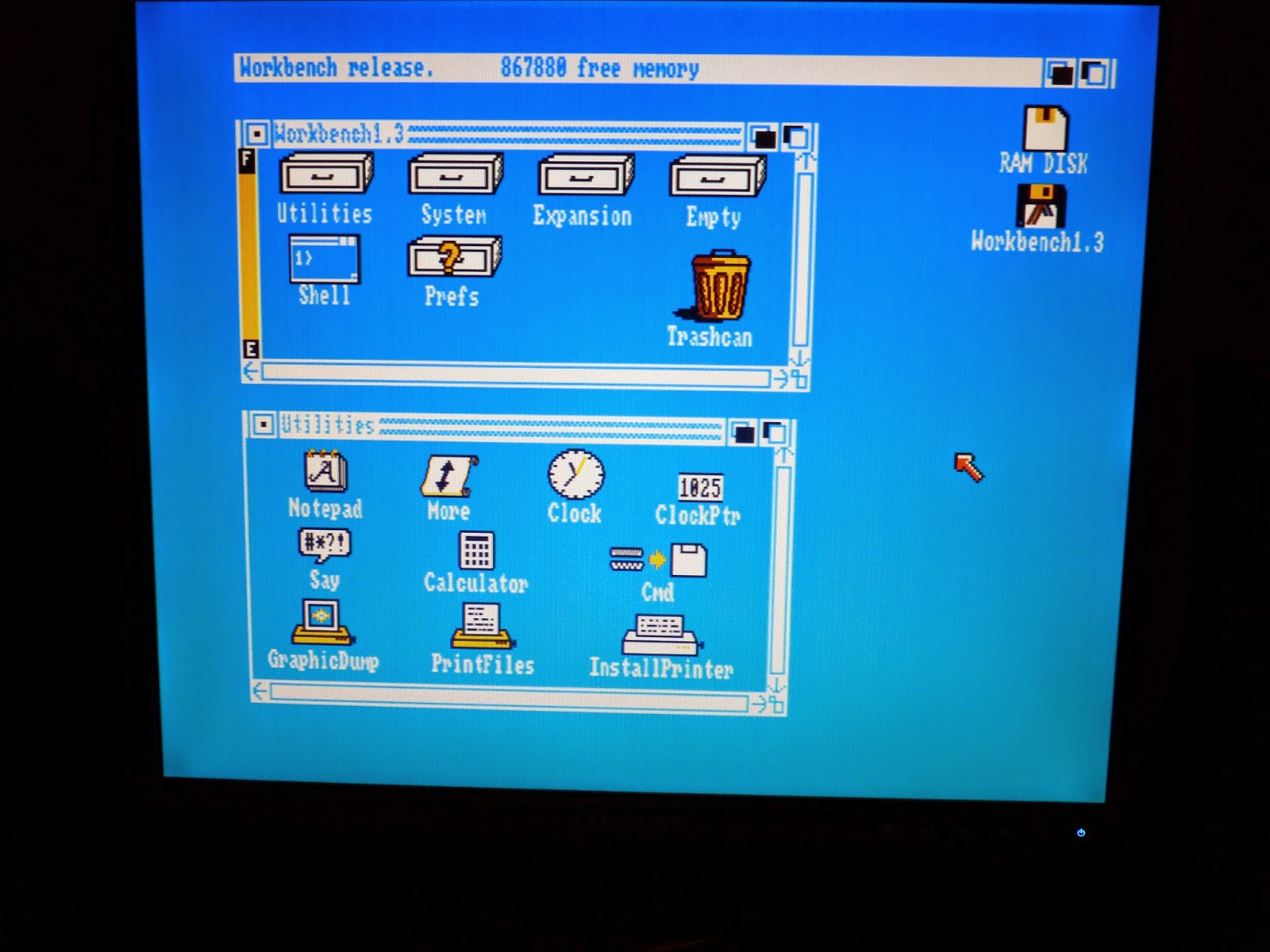 Being a former demo scener and a big fan of Amiga demos, I then fired up Razor 1911 Voyage demo from 1991, which worked perfectly on the Amiga 600. Audio was crisp and both channels working well: 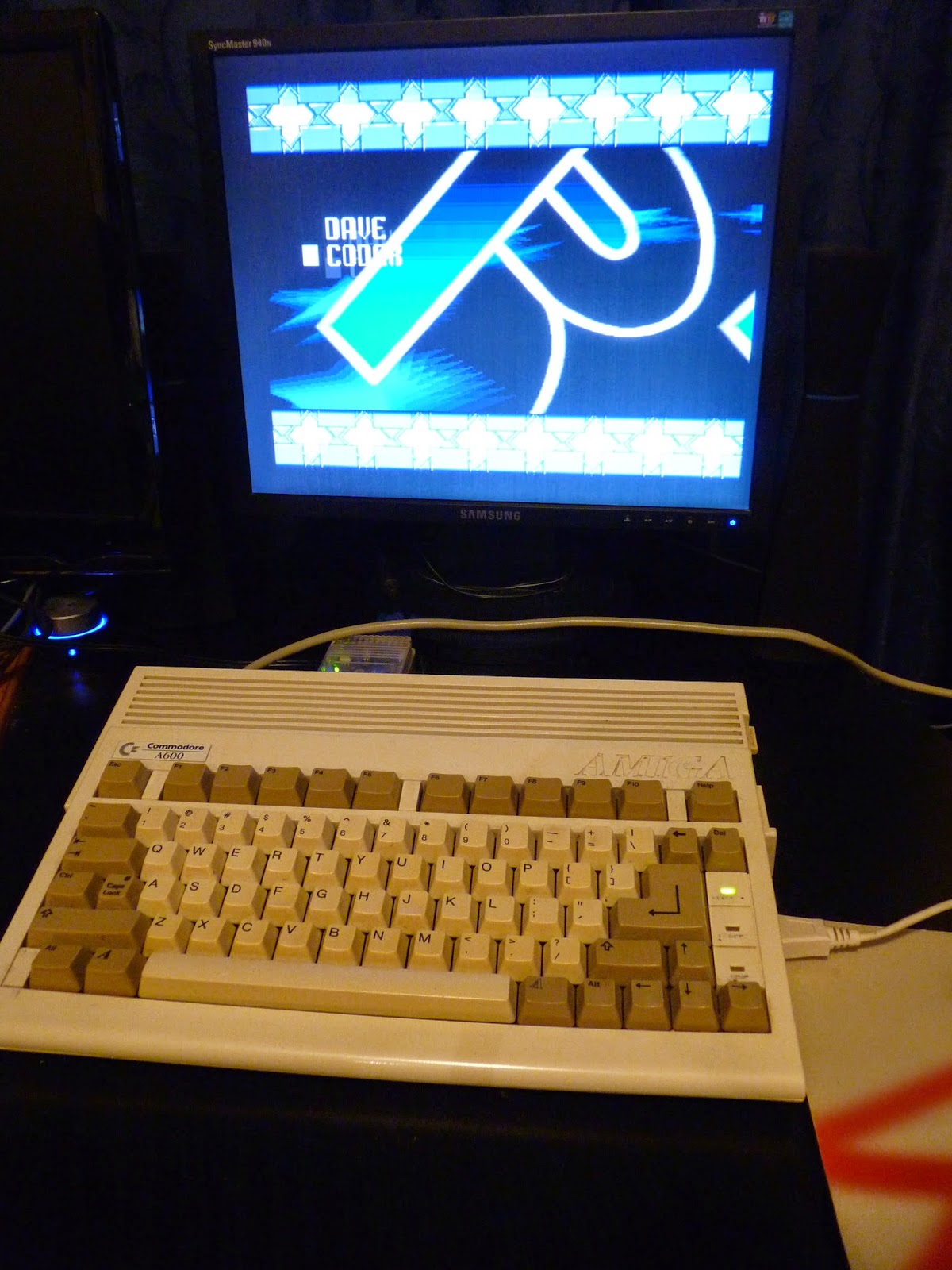 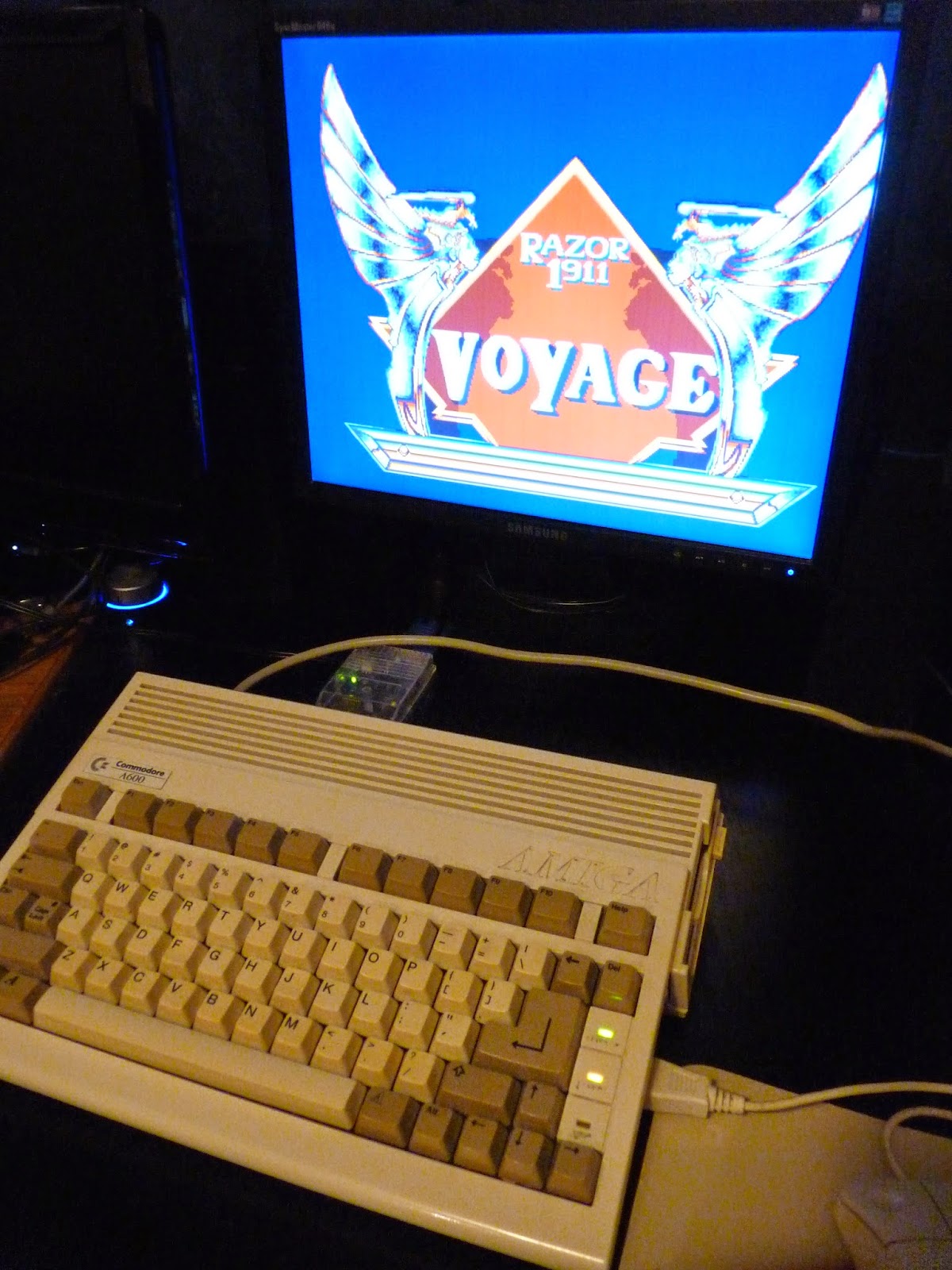 I will next get to grips with taking apart and fully cleaning the Amiga 600 inside out, before moving on to the next step!

Really glad to have an Amiga 600 again, but there is a long way to go before this Amiga 600 is where I want it to be, with many upgrades to come and all to be covered here in this blog.