Today's article will be among the last (X500's hardwarewise) but certainly the most important as it's about cable management in order for the upper shell's cables not interfering with the innards of the case.
Yeah I know I'm a bit OCD with the cables :)

As you might have seen already in my initial X500 Evo presentation article, the upper shell case has 2x 50mm Fans with it's cables, a cable for the Power switch, and 2x quite lengthy thick insulated LED cables for Power/HDD activity. 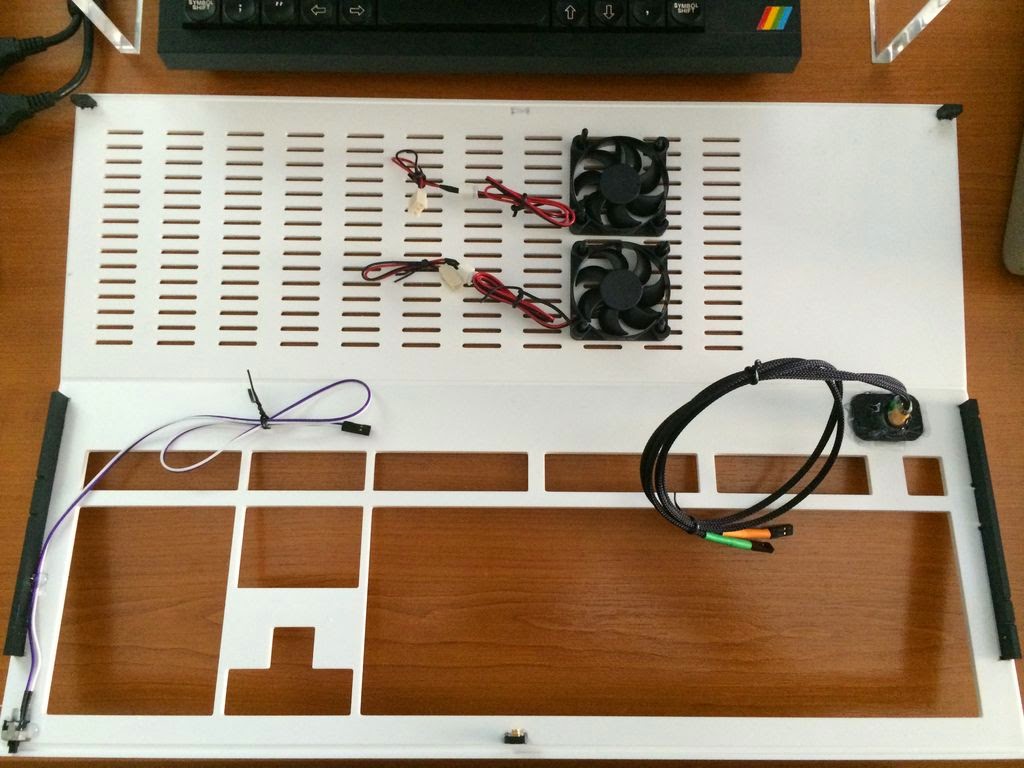 Someone that has an Evo will realize that upon closing the case these cables tend to be all over the place. Sorry I don't like that as you can imagine :)

So, first thing is to gather all cables in one side, in order to have all in one place.

The most distant cable is the power switch cable which was hotglued in place as you can see... 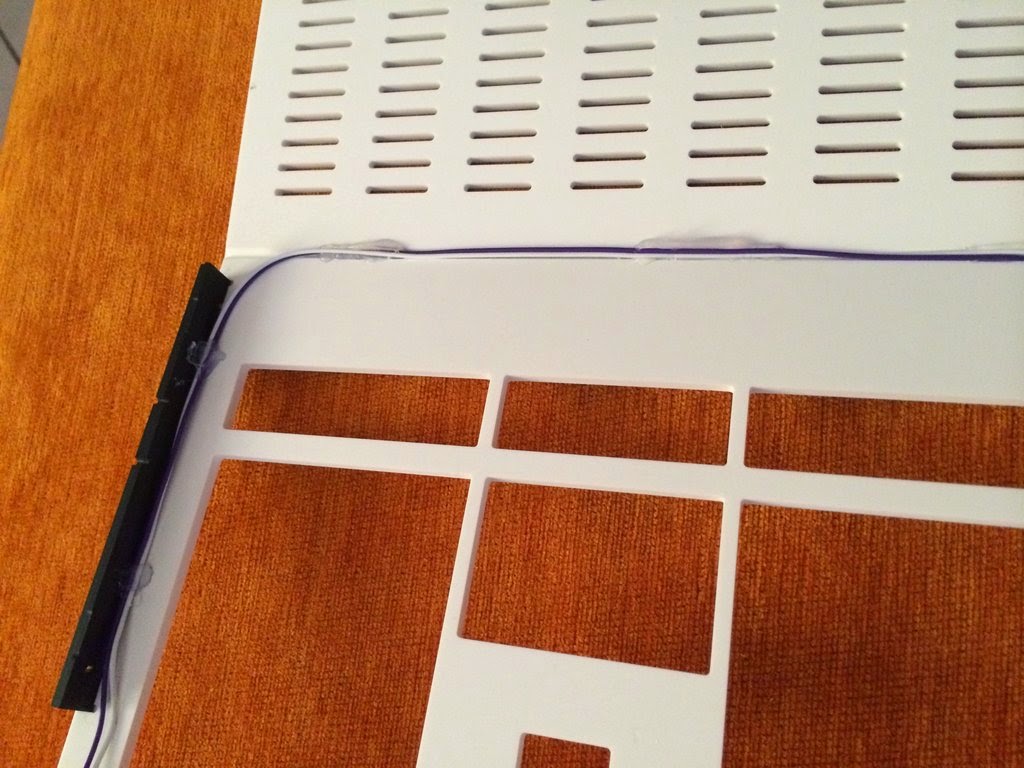 Then the Fan cables and Led cables where hold together via straps and the 2x adhesive mounters that Loriano has supplied. 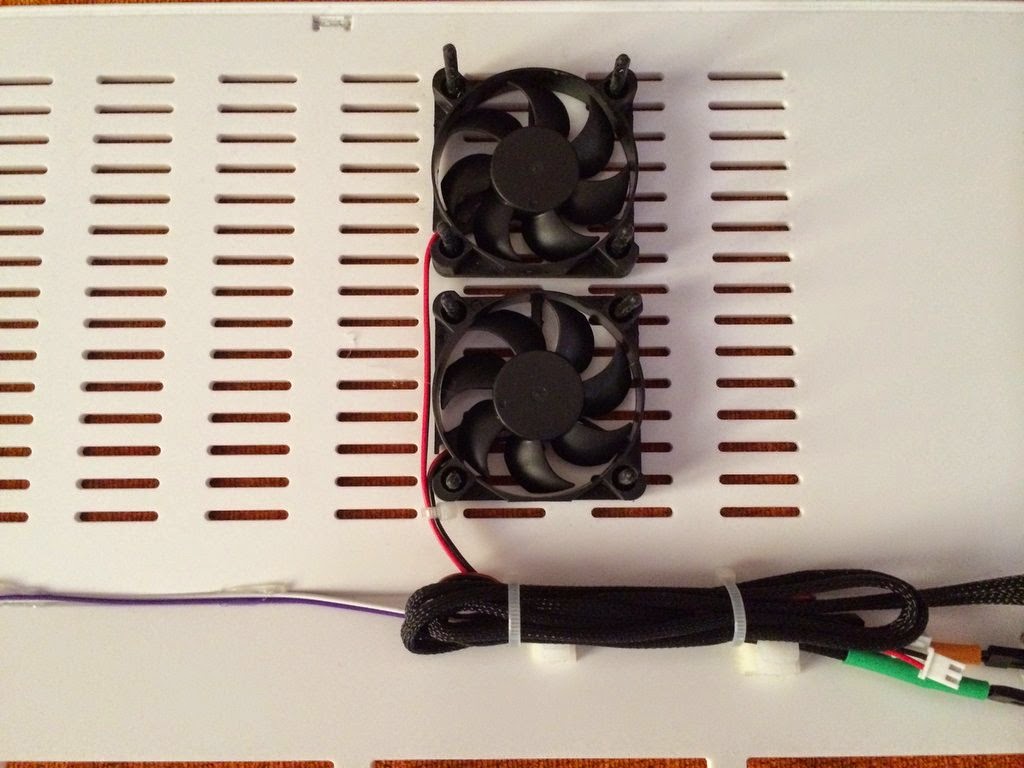 Also, since I had one more spare internal USB header (motheboard has a dual USB2.0 header which one is occupied by the Cherry MX keyboard) I thought of taking advantage and putting inside a cheap USB WiFi/Blutooth combo adapter which was hotglued in place as well. Ofc I wouldn't solder directly to it (if I wanted to remove it at a later time), so I attached a female USB adapters that I had in my stash. 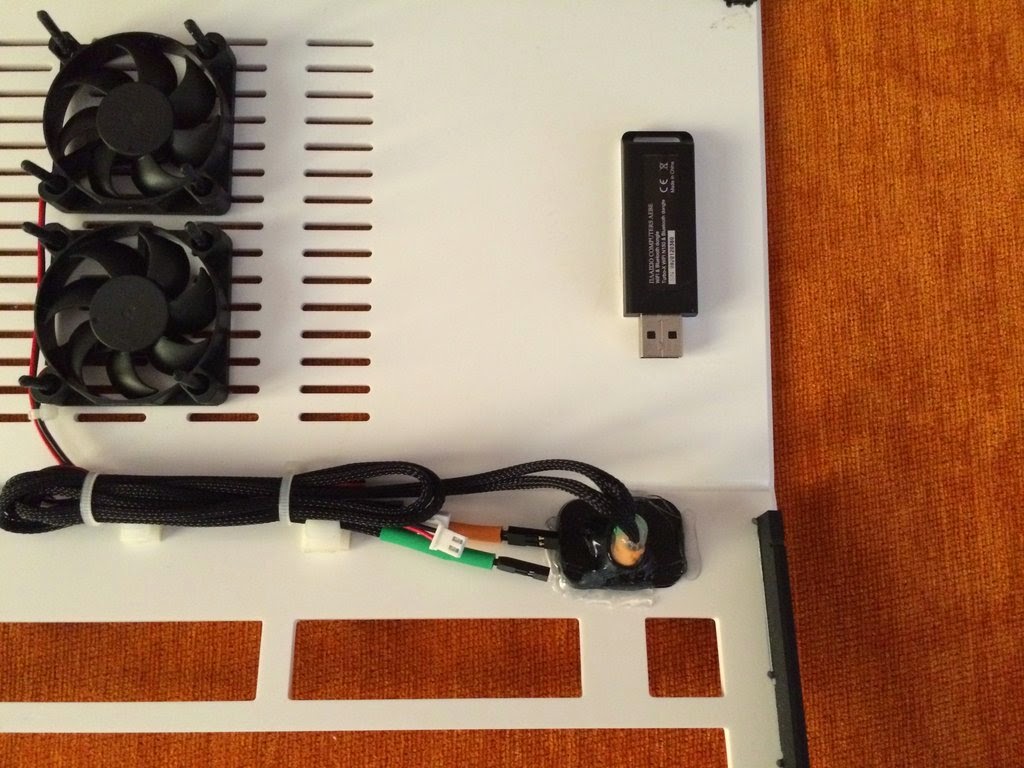 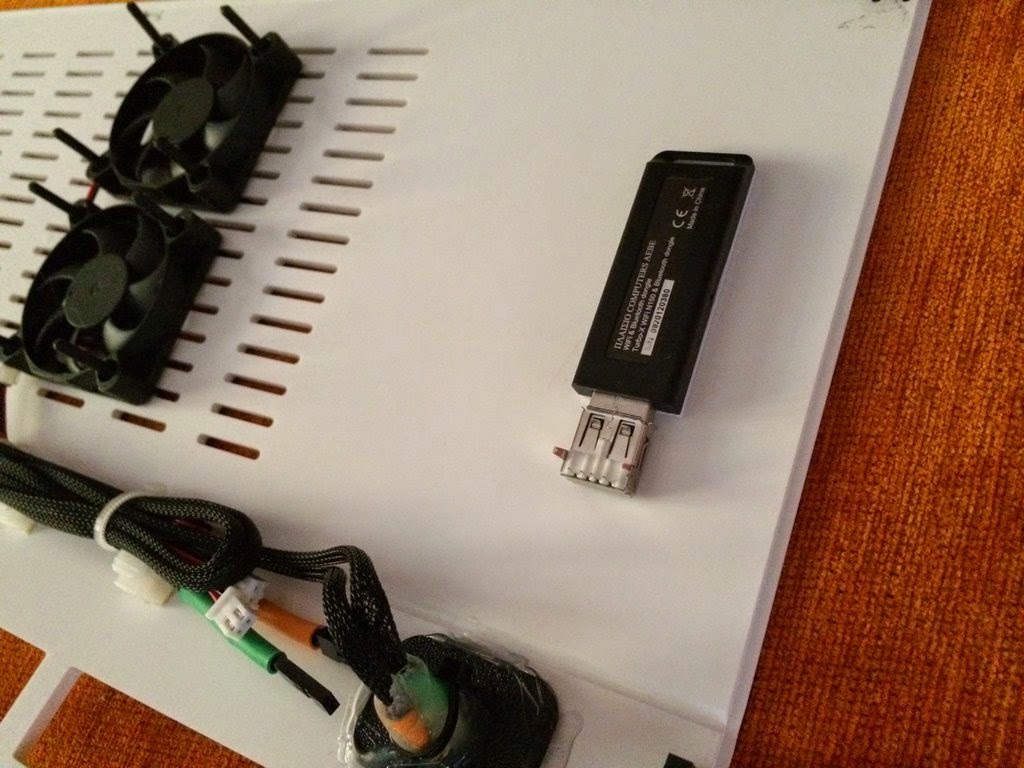 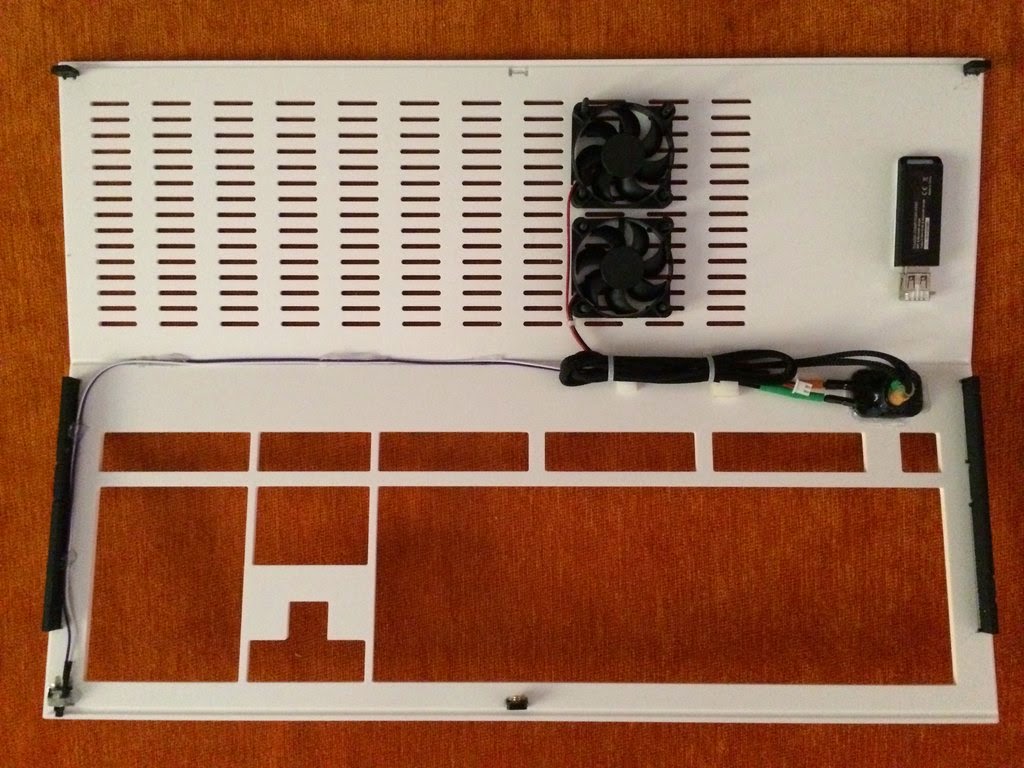 Ok so far so good. Every cable is in one place, and nothing interferes with the internal space. What I wanted now was a 14-wire cable in order to use everything on the upper shell (2 wires for power switch, 4 wires for the LEDS, 4 wires for the Fans and 4 wires for the USB header).
An old VGA extension cable was used for my needs :) 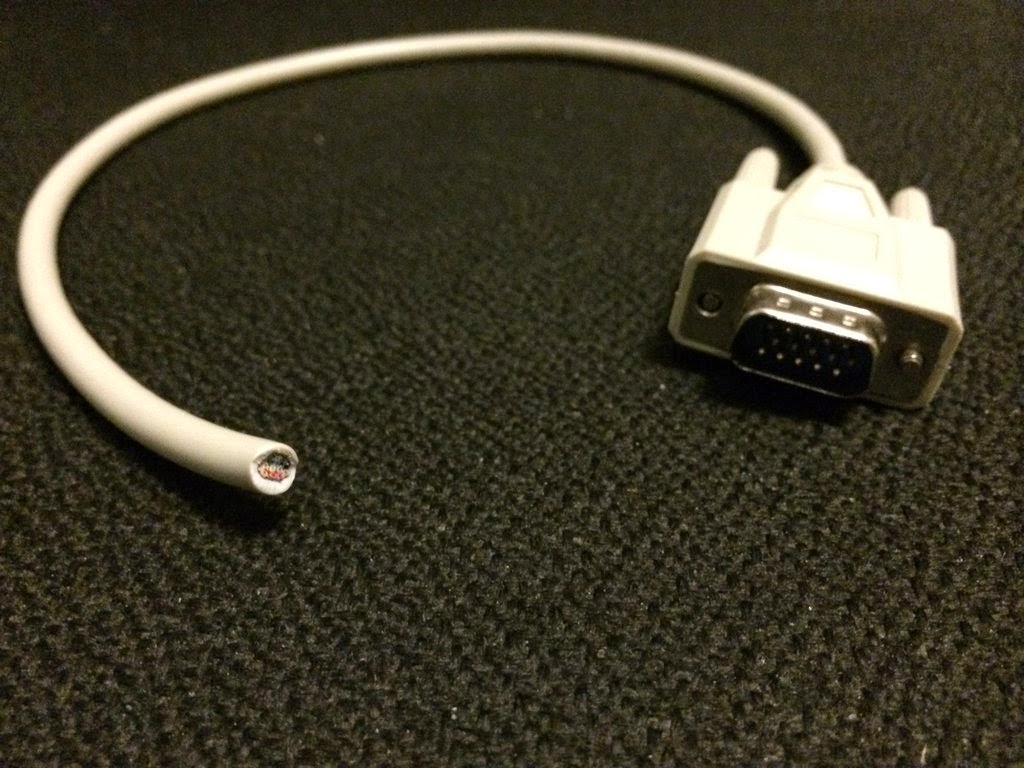 Once I measured correctly the length I needed, I removed the extra 2 wires (that weren't needed) and started to make the pairs by twisting the wires together. 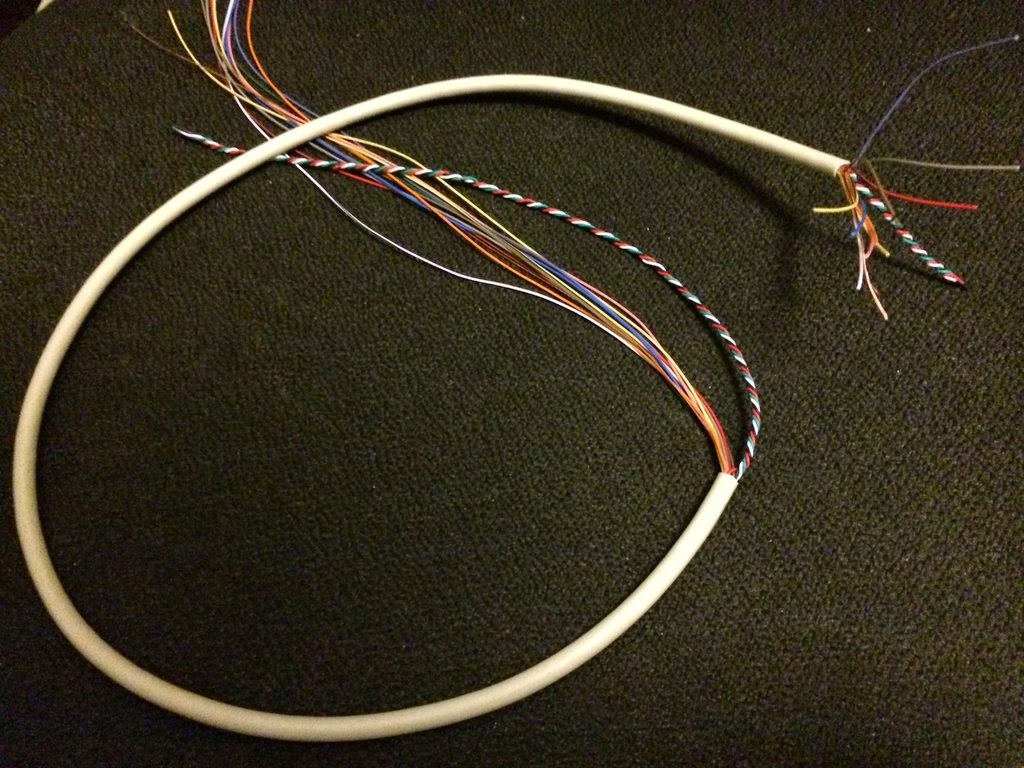 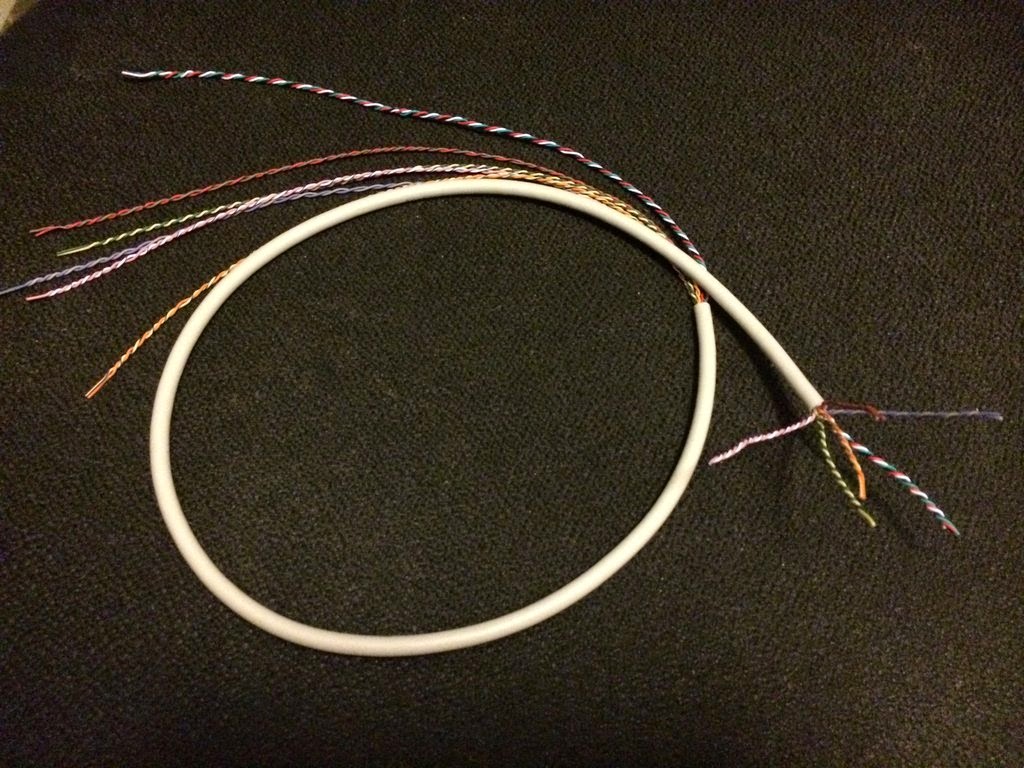 Then the irritating part of putting the headers for each pair on the mobo side after insulating them wire-by-wire with heatshrink tube. Yep, you see correctly the USB header being A LOT longer than the rest. You'll understand later on. 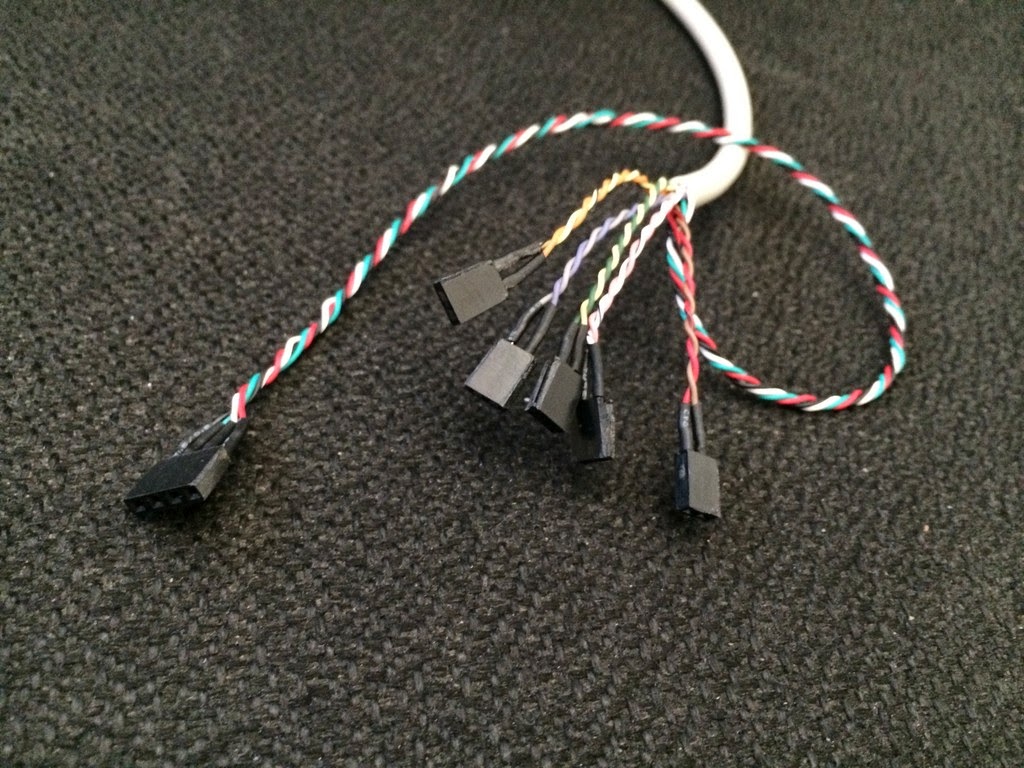 Here you can see the headers for each pair on the upper shell side soldered and insulated by heatshrink tube as well. As you can realize, I have different connectors for every pair. Other for the fans, other for the LEDS and power switch and other for the USB header. 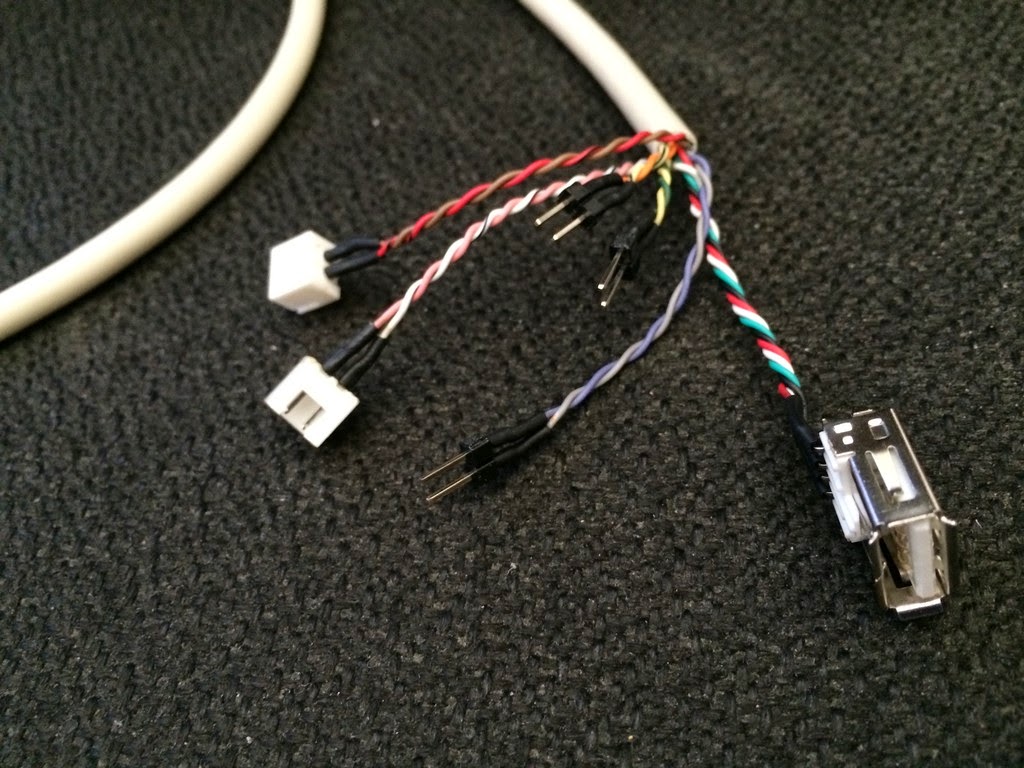 This is the finished product (lol). 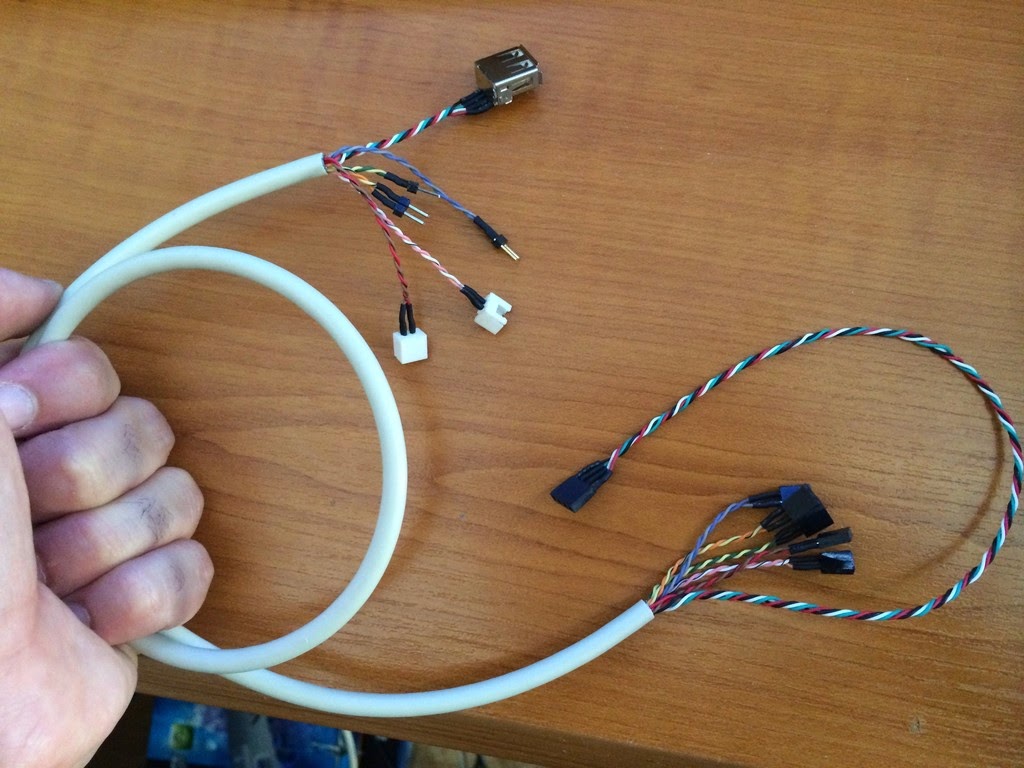 Time to put it on shall we?
I started with the small headers and continued with the USB header. 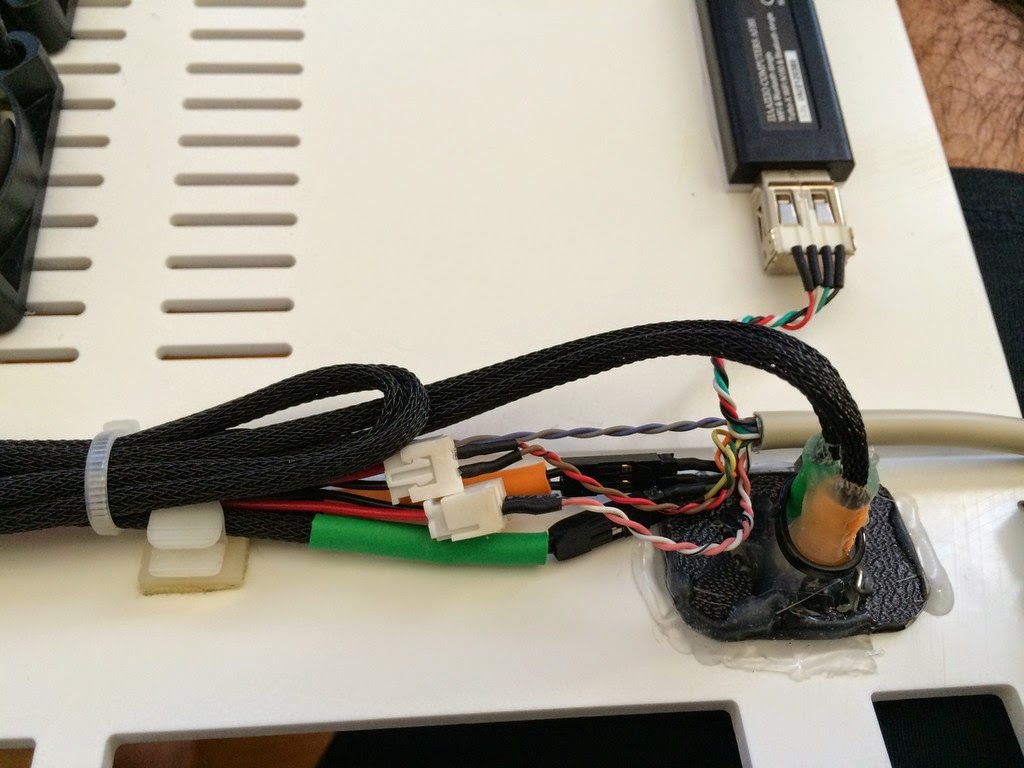 And after everything was in place, I secured them with 2 more straps. Cool it's rock solid and unmovable now but if anytime I need to change the fans or LEDS, I can easily remove the straps, replace and remount them :) That's the good thing with having headers on everything. 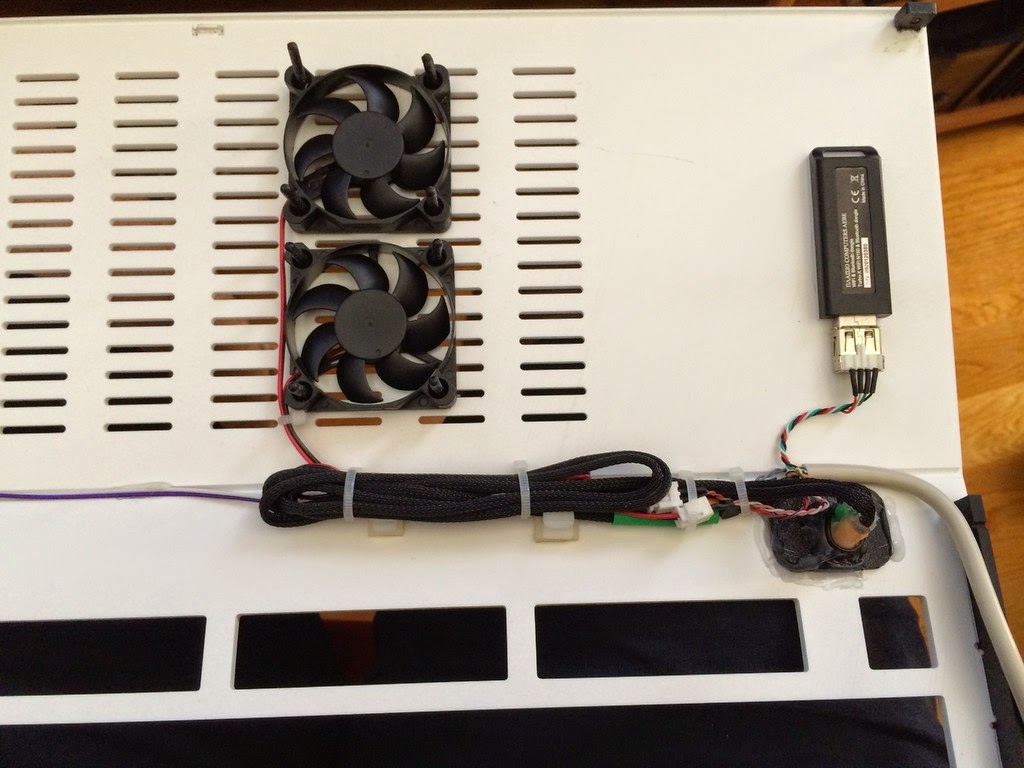 Here I temporarily mounted the upper shell on the lower shell in order for everyone to see how the cabling is done and how it fits once closing the case without interfering :) 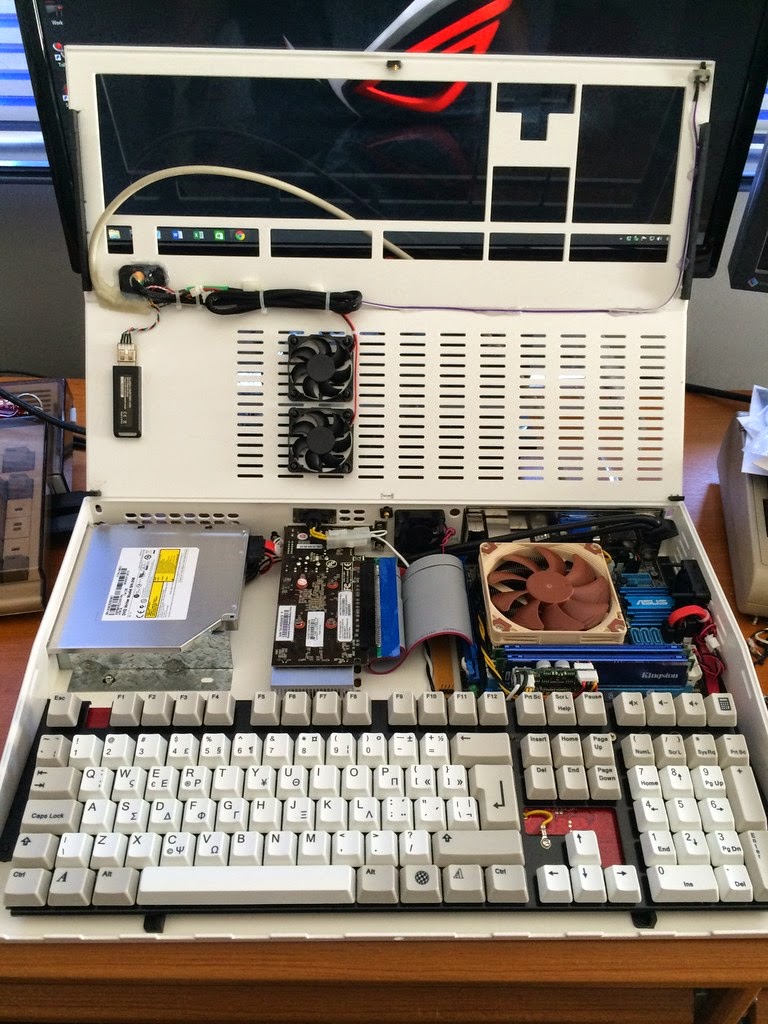 For the first test I haven't put anything in place leaving the wires (especially on the motherboard) loose. 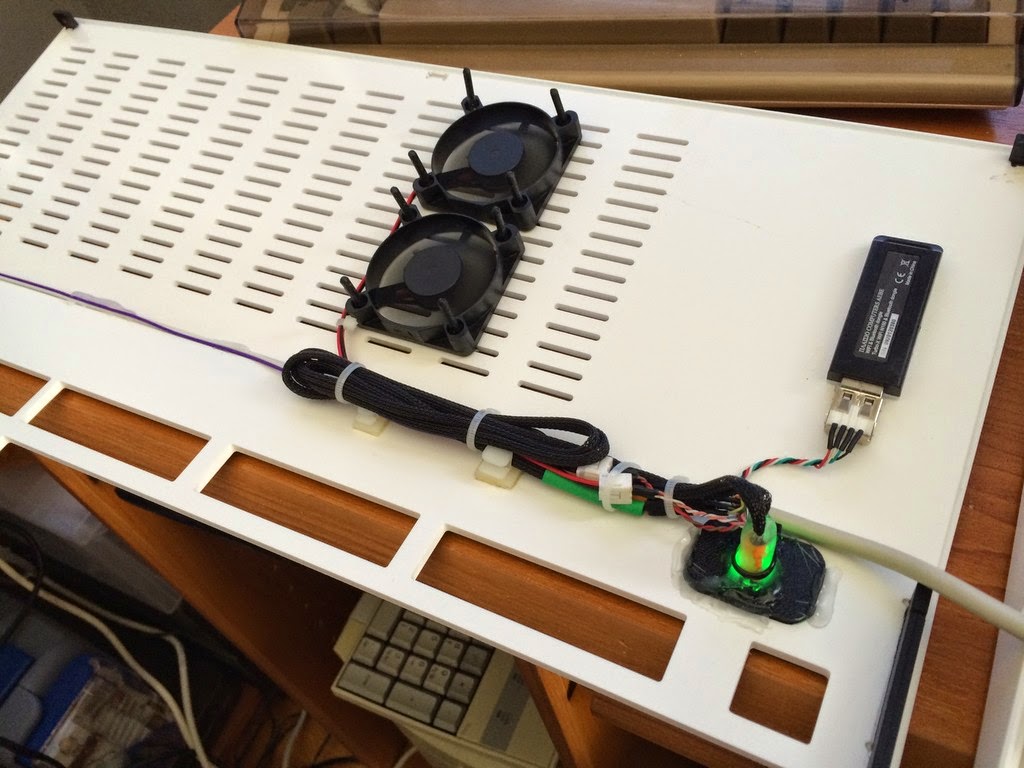 Here you can understand WHY the USB cable was a lot longer than the rest of the wires :) 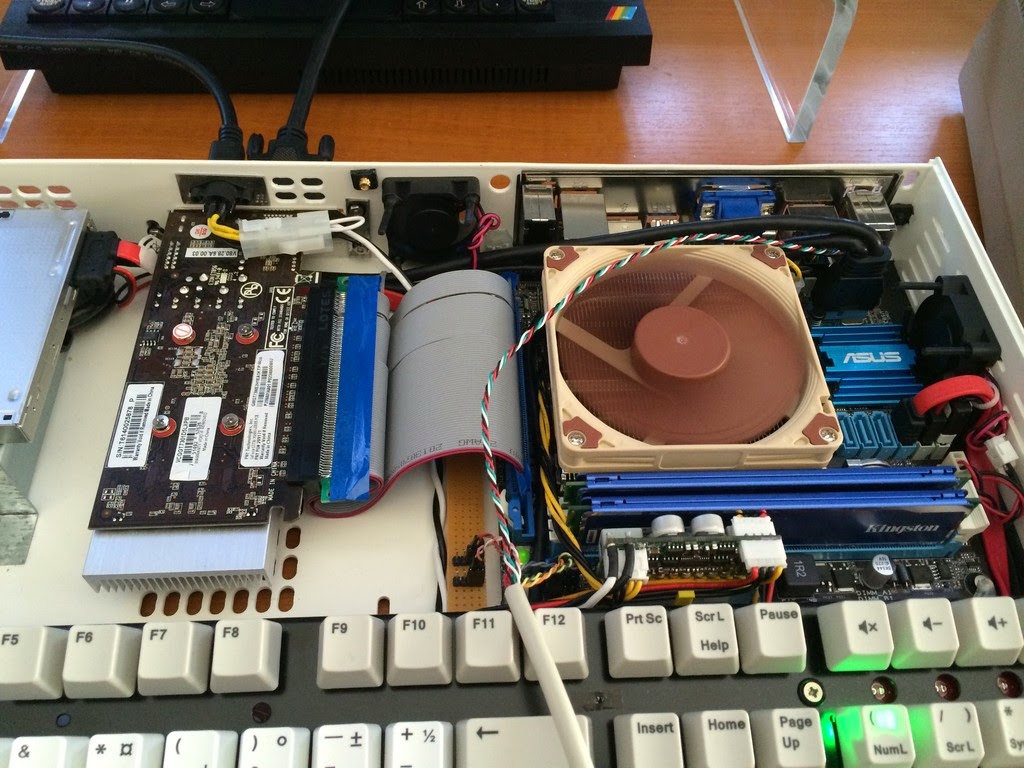 Initial test and Windows7 booting was a HUGE SUCCESS as everything worked out of the box! I haven't even done any error in Positive-Negative mounts of the LEDS which is typical for me :)
After everything was ok, I permanently put the USB wire in it's mobo header. 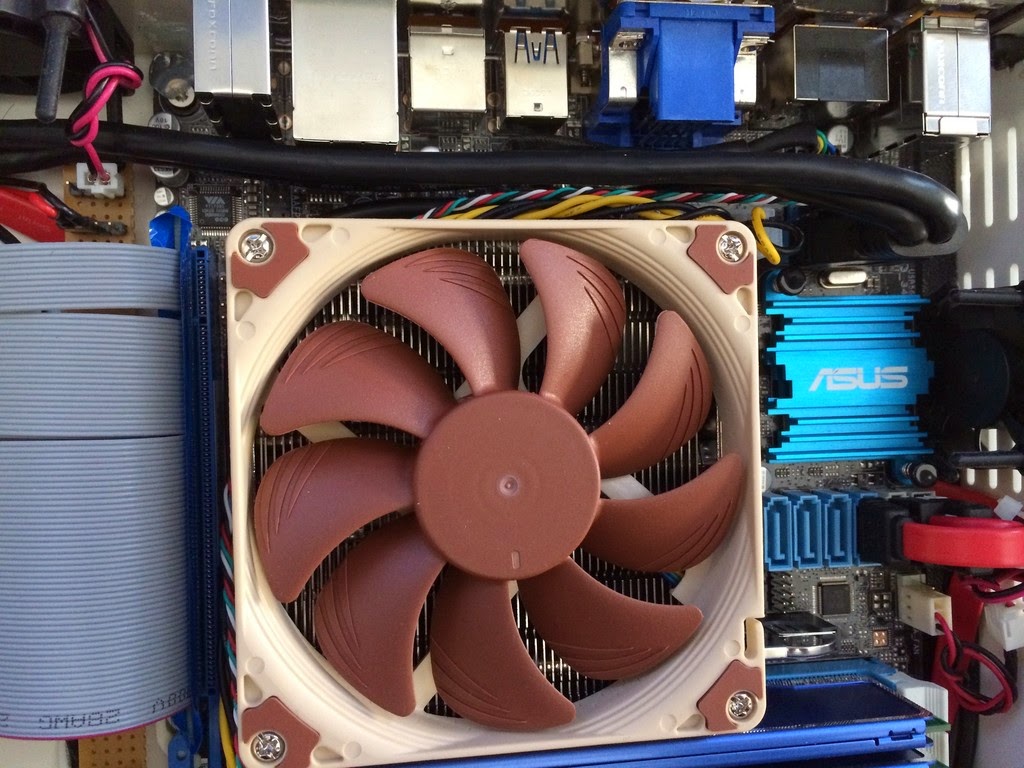 As all the other wires in the designated positions on the motherboard.
The round cable was secured with a strap, using 2 holes on the chassis (nice one Loriano) 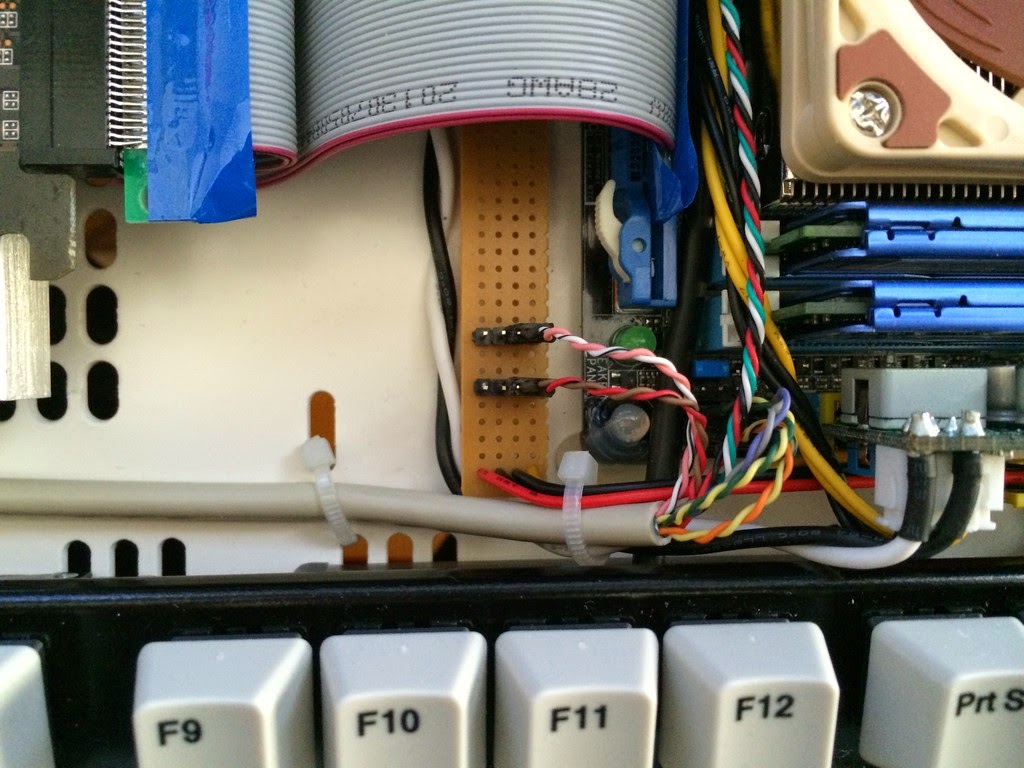 ...and here you can see how it looks with the upper shell in my hands and everything connected. I deliberately left some length in the round cable, in order to be able to put the upper shell on the left side anytime I wanted to check out or mod my case :) No need to dismantle everything when you mod.
After all, the round cable goes UNDER the keyboard on the left side (on the empty compartment left from the Hard disk area) and doesn't interfere with anything :) 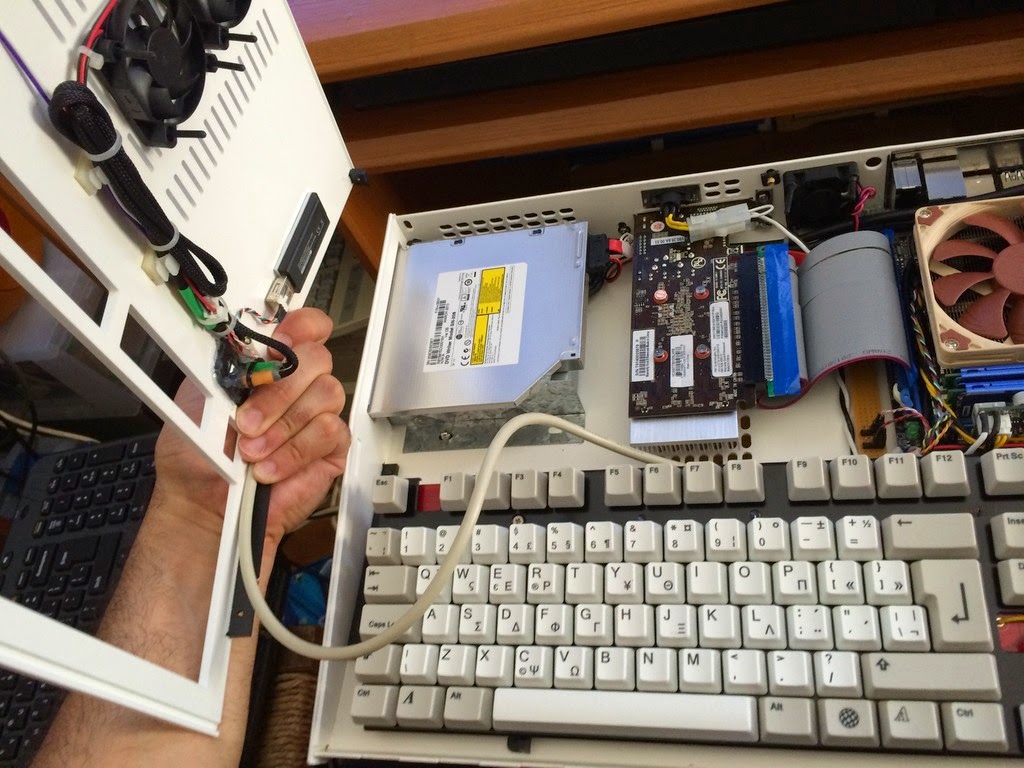 One tiny detail that prevented the upper shell to close firmly was the damn huge USB3.0 connector that was thick and tall as fok touching the upper part of the shell :) 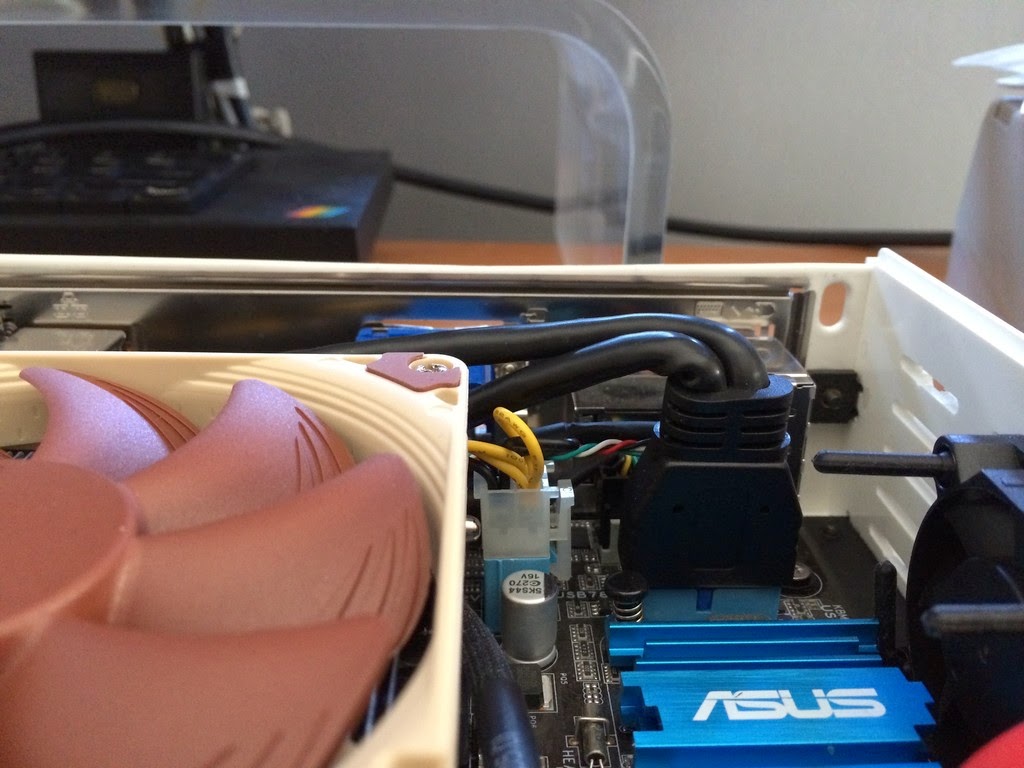 I decided to be aggressive so I removed the extra height it had by it's base (after I attached a stripe to keep both cables secure). A LOT BETTER now :) 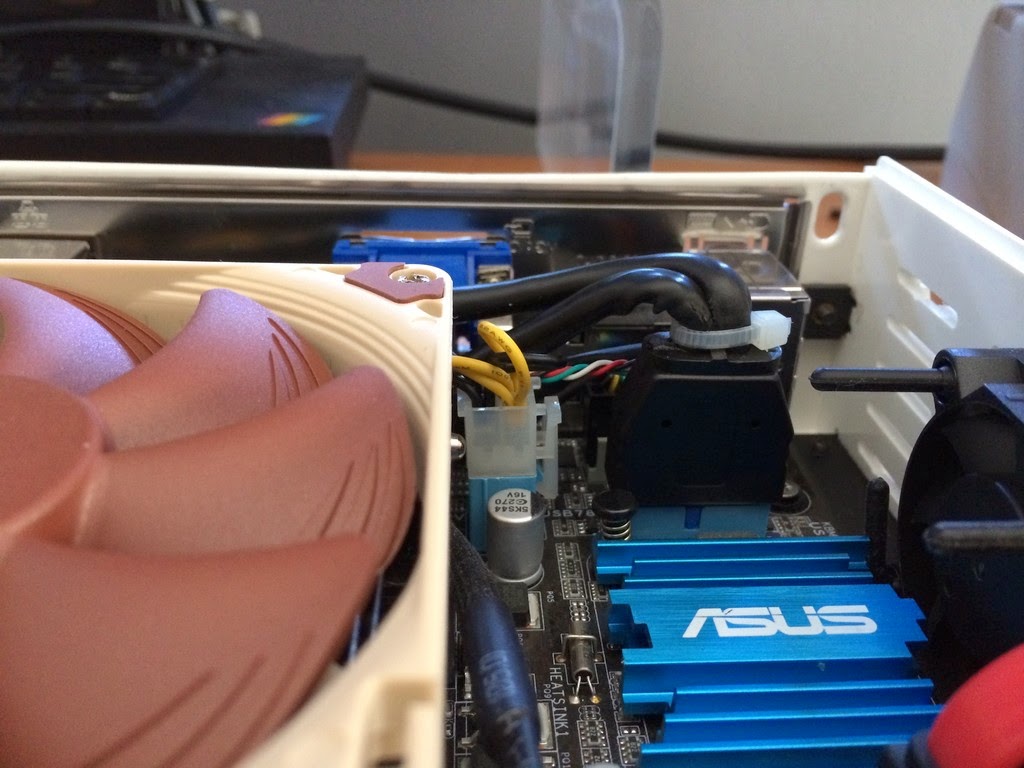 Case closed successfully and at last I was excited and happy about it :) 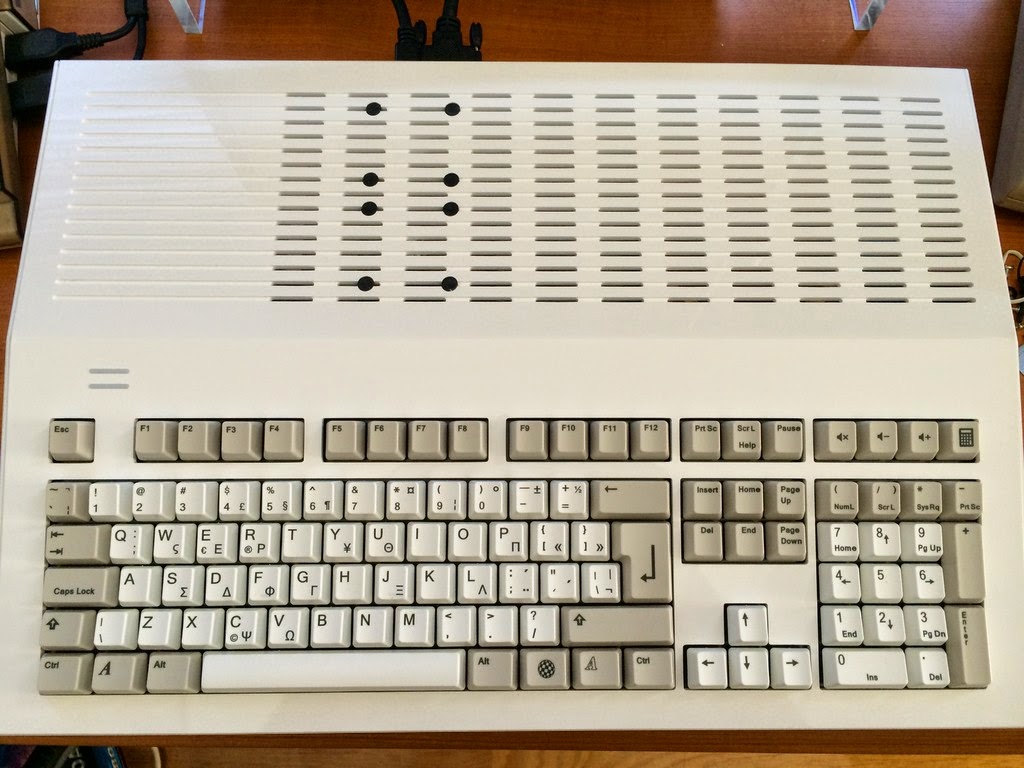 Not much left to do tbh from now on (hardwarewise) but some minor details that I will put in a next (and probable last article about X500 Evo).
Stay tuned and I hope you enjoyed it as well :)
Read more