So, here’s the 2nd of the 3 “App Stores” for Amiga. It’s actually part of a much larger utility called Jack for Amiga. I can’t help but think “Jack” is short for “Jack of All Trades”. This utility does a LOT of things. However, I’m only looking at the App Store for now.

Installation was a bit tricky. I downloaded the app, extracted to the RAM drive and proceeded to start the Installer Icon. I was then presented with a helpful splash screen, which had to be closed to proceed: 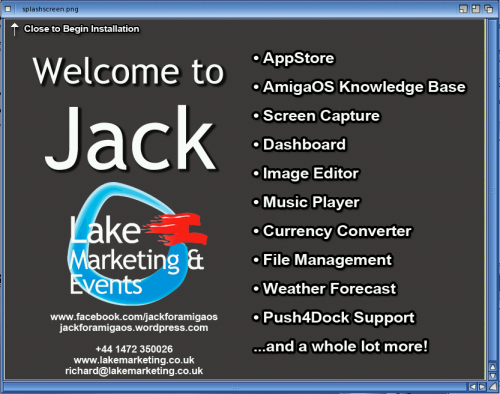 Closing this then opened a CLI (command line interface) for IconX which must have been running an install script. However, the window output only showed a 0 the whole time, so I wasn’t sure if it was working or was stuck. Something a little more verbose would have helped.

It ended by asking if I wanted to add a dock image, which I agreed to. It was installed in SYS:Utilities

I then had the chance to choose the language: 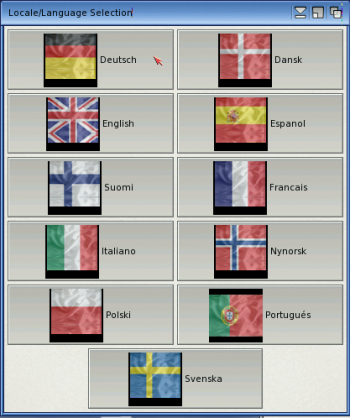 It then informed me that I needed to choose a Home Directory for Jack. I’m thinking this will be a central download location and will be prompted later. I also get an exit install splash screen (not shown). 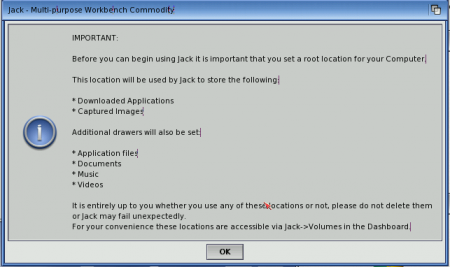 Here’s where things got a little strange. I am then shown an error message:

So, I go digging into the installation folder for Jack and see a Welcome to Jack file. I open that and read that I must have some other items pre-installed for things to work right, plus a few recommended items. So, I’m off to download thebar.mcc and AISS and install them both:

(Something descriptive like this would have been useful when installing Jack)

(traditional installer, used for Amiga 3.x and 4.x, autodetected which)

So, then I thought I had enough to start, but was warned that the version of textEditor.mcc needed (15.44 or newer) wasn’t found. Off to Aminet and I found it and installed it:

I also downloaded and installed Push4Dock and Wordnet (both recommended in the Welcome to Jack file). Wordnet installed okay but Push4Dock’s installer wasn’t set up right and I eventually had to read the install script and manually do the install by hand via CLI.

So, at this point, I’ve been warned multiple times that a reboot may be necessary. I did so and upon reboot, I start getting AmiDock warnings that images weren’t found. These pointed to an error (probably on my part) about Push4Dock. Anyway, I was able to start up Jack. I was first asked to find the Home Directory folder, so I made one and pointed to that.

So, Jack’s initial window is a calender:

So, then, with App Store highlighted, I click the Configuration button in the lower left. This launched a sync/download window:

Finally, this finishes and I get a window where I can click the icons for the categories:

I clicked Games and it took a while to parse the file it downloaded and build the list. Clicking an item and selecting the Info button at the bottom gave this two-tabbed window with info and reviews/comments:

I noticed a tab in the main appstore window for Games, so I clicked that and got what I’m guessing are featured games with complete cover artwork.

This appstore appears to be just a fancy front end to OS4Depot files. I checked other categories and found a lot of entries. The addition of the comments/reviews was nice. Also, there is a button called Donations. The list that comes up is for developers that have registered that donations are accepted for their work:

You have to sign up / login for Jack to be able to donate (and I’m assuming to use the comment system).

There are buttons to tweet and make facebook posts about the app, email a friend and check for updates on an existing installed app.

I wanted to test what it did in terms of download and install so I choose Office category and selected AOrganizer. It was added to the download window (a queuing system it appears):

It says “downloading…” while in progress, then the downloading disappears and you have to double click that item in the list. This opened the downloads folder (probably under the Home Folder):

It didn’t offer an autoinstall. Not sure if this is due to Jack or the app in question. At this point, I just double clicked the icon and used unarc to extract to RAM. The app itself appeared to not have an installer so I just copied the folder to my WORK: drive and ran it directly:

It’s more of a way to interact with the OS4Depot software repository. It does offer a handy way to queue up downloads, read and leave comments and donate to the developer. I’m assuming the update functionality works too. This is more like Grunch (review coming soon) than AMIStore.

I can see this being handy. I have the feeling I’m not using it the way it was intended. I’m also assuming the other, massive functionality that Jack Provides is part of the attraction of this software. I may review other portions of Jack in the future.

Anyway, Jack itself is worth the download but I hope you install thebar.mcc and AISS before hand and avoid the issues I had!