Return to the Roots

[Edit] BSzili found the problem and a solution with the sound effects and slow loading time. Even though the solution for the latter problem didn’t work for me. Stay tuned until we find it.

Maybe you remember the 1993 game Settlers for the Amiga? It was a real time, slow paced build-and-conquer game, and a really good one. Then came Settlers II in 1996 and it was even better, but wasn’t made for the Amiga. I used to play it a lot on my PC.

Years passed, and now there is an open source project called Return to the Roots (www.siedler25.org), which makes it possible to play the game on non-Windows machines. Not perfectly though since the project isn’t finished. It’s at version 8.1 at the moment. In June 2013 the porting wiz BSzili made this game available as a release candidate for MorphOS (based on version 0.8 and it requires at least 64 MB of VRAM) after some trial and error (download page). I’ve finally given this game a try.

In order to get this game to work, you need a copy of Settlers II Gold Edition from 1997. Nothing else will work. Luckily, I actually have my copy from the late 90’s here:

If you don’t have a copy, you need to find one. Next, download the game port from BSzili’s homepage, if you haven’t already. Unpack it to somewhere on you hard drive:

Now you insert the Settlers II CD and look for the S2 folder. Inside it you will find the GFX and DATA folders. Copy those to your root folder (which I have renamed to RTTR):

Don’t mind the s25rttr folder. It’s something that’s added when you have started the game for the first time.

Now it’s done. But before you start the game you must make sure you got an internet connection. Even in single game mode you need to be online for some reason. When that’s done, double click in the s25client icon. Now a loading screen (in German) will appear:

And you will also note that this game takes a loooong time to load. There is a debug screen there as well that will show you what the game is doing, and how long each part takes to load:

But as long as your mouse moves, the game is progressing as it should. Finally, you will reach the main menu:

Before we start to play a game, let’s look at the Options menu: 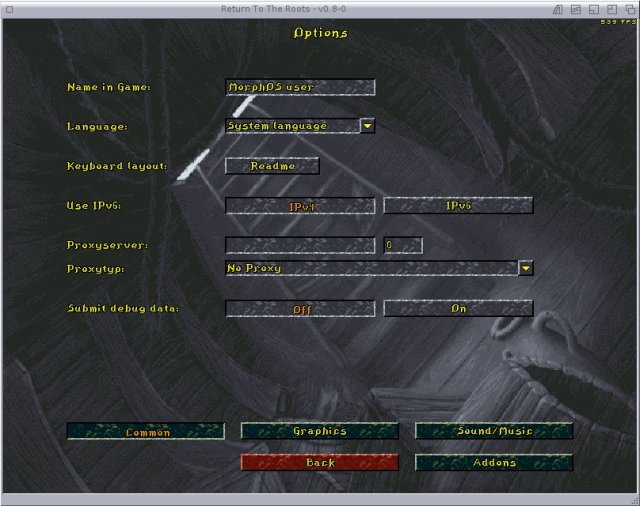 One nice thing is that you can change language:

Note that not all languages work, but quite a few do. However, we go back to English (System language) for now. In the Graphics menu you can also choose if you want fullscreen or not. But we want to click on Sound/Music. The reason is that there is an error when sound effect files are converted, which can be seen in a seperate debug window:

This makes the sound effects sound terrible. However, those where never really that important for the feeling of the game itself in my opinion. I’m happy with having only music:

After I wrote this guide, BSzili found the problem and explained to me how to fix it yourself. Go to the game drawer and right click –> View –> All files. Go to the drawer RTTR. Show all files there too if it’s not already doing so:

Right click on s-c_resample and choose Information. Now click on the little box on the right which says Executable: 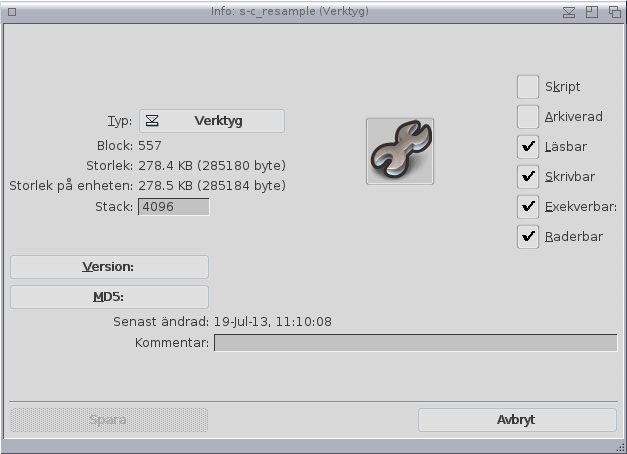 Save and do the same with the file sound_convert. After this sound effects should work just fine the next time you load the game.

Another thing BSzili said was that you can speed up the loading time by going to the Graphics option and turn off Optimised textures: 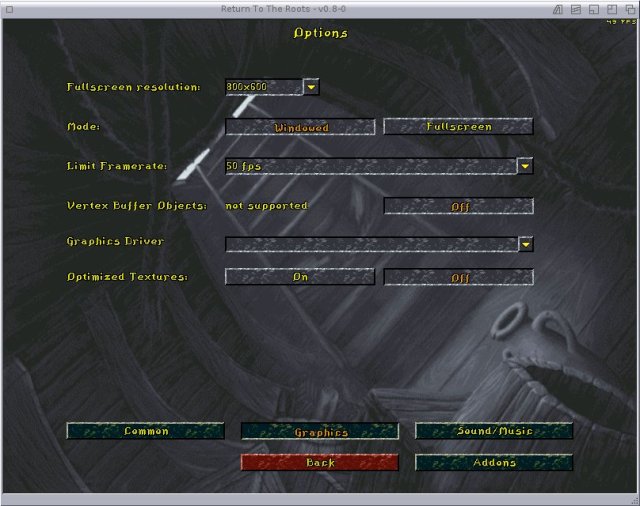 BSzili says it works for him, but for some reason it doesn’t for me (it turns out to be mostly a G5 disk operation related problem. A G4 based computer will load a lot faster). But since there is no loss in the graphics by doing it like this you might just as well do it anyway if you like.

Now we can return to the main menu and click on Singleplayer. I want to try out the campaign so I click on that:

It’s not supported (yet). Which means that we can only play in non campaign mode. We click on Unlimited Play and reach a map menu: 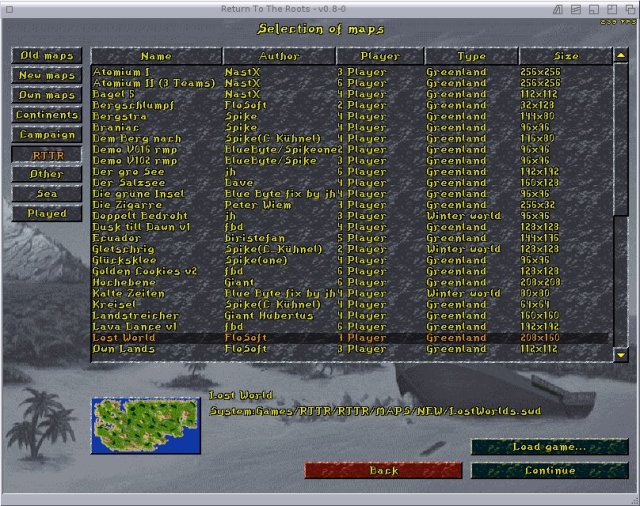 I choose a map (Lost World) and click on Continue:

Even though this works fine, I change the setting Goal from None to Total domination (that is: destroy all enemies), and for the sake of this blog, Exploration from Fog of War to Off (all visible). Now I will be able to see if the computer players work or not: 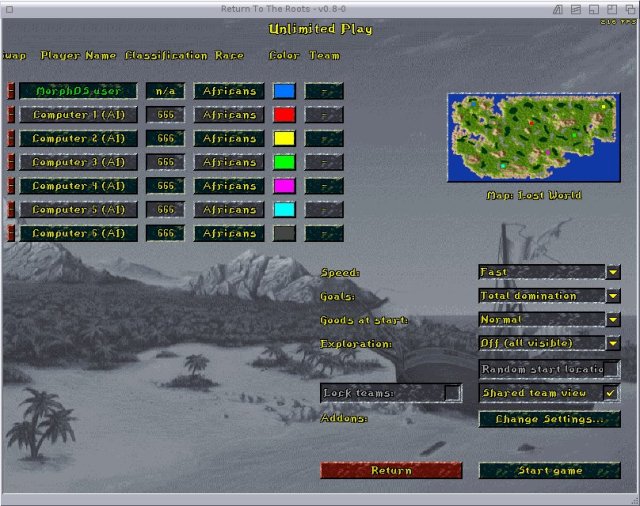 I also take a look at the map to see what one of the computer players are doing: 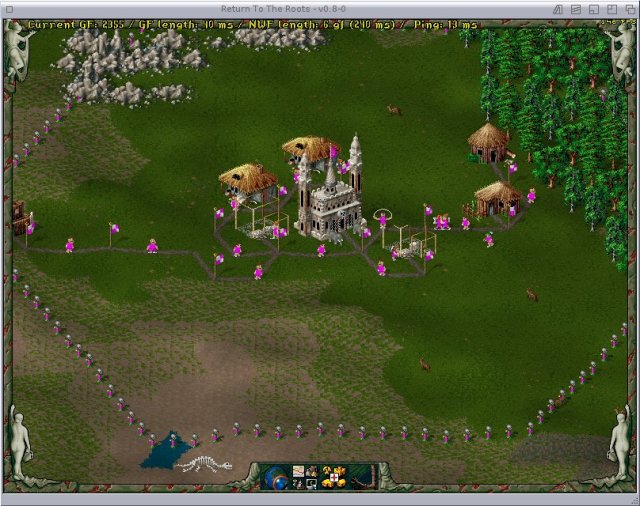 As you can see, the computer player is just as busy. Everything seems to work. Now we have to be patient and spend hours upon hours gathering resources, expanding our borders and destroying our enemies. Happy playing!

Oh, if you like this game you can show your appreciation by donating a few euros to BSzili via Paypal at his homepage. There is also a lot of other games there he has ported for your enjoyment.