Audio cards were a luxury in Amiga computer. Apart from a few clockport models, it was the Zorro slot machines that gave the real high quality option.

One of the oldest and most supported cards for Amiga was the Toccata soundcard. The sound controller IC is well documented. Someone pointed this out on the EAB WinUAE support page and Toni Wilen (fresh off the release of v3.0 of WinUAE, with PowerPC Support) decided to add Toccata emulation support.

Why do this when the UAE sound support is already well handled? Well, why not? I downloaded the v3.1.0 beta 1 WinUAE on that support site and set out to see how it worked.

Then, I looked around to find some driver software. I found that amiga.resource.cx had some links to some diskmasher format installer disks. So I fired up Amikit (v8) on this latest WinUAE and included the toccata 1.1 dms file as a floppy:

and then got into the Workbench and opened the floppy icon to start the English installer: 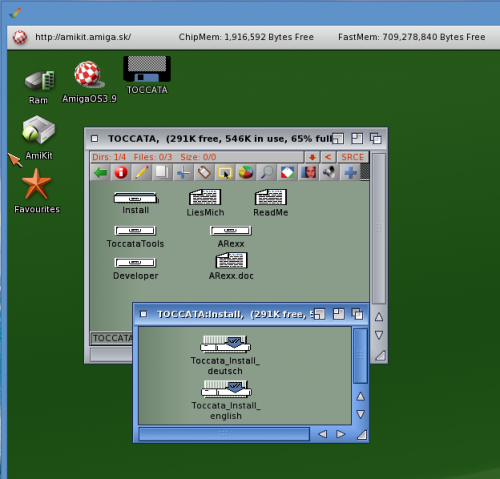 and it was the standard Commodore installer: 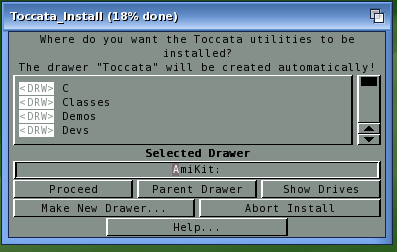 but I ran into my first problem: The toccata.audio driver for AHI wasn’t included in the standard AHI that was part of AmiKit v8 (and I think it isn’t installed by default).

So, after a bit of digging around, I found that I had to head over to Aminet.net to get supplemental AHI drivers:

Then, after a reboot, I set up the AHI Preferences to use Toccata stereo 16.

I then ran into a problem trying to run AmigaAmp. It was complaining that it couldn’t open AHI device. I eventually had to go redownload and reinstall ahiusr_4.18.lha from Aminet.net and this fixed that.

Then, AmigaAmp wanted to use the stereo++ version of the output:

I had tried to set up Toccata as unit 1 and leave the UAE sound device as unit 0. I eventually had to set Toccata stereo++ as unit zero and change AmigaAmp settings to use AHI unit 0.

I was then able to get some sample mp3’s I’d downloaded to play using AmigaAMP.

So, what is the advantage of using emulated Toccata? Not sure yet for a WinUAE user unless there exists some software the specifically uses the Toccata, but I thought it was cool to use.