This weekend I was busy reconstructing my computer room desk area after pulling it apart for the Adelaide Amiga meeting on Monday. With my X1000 now returned, and the addition of the Icaros setup on the Core i7 PC, CDTV and a Sam460CR, I needed to find a way to fit them into a small space. 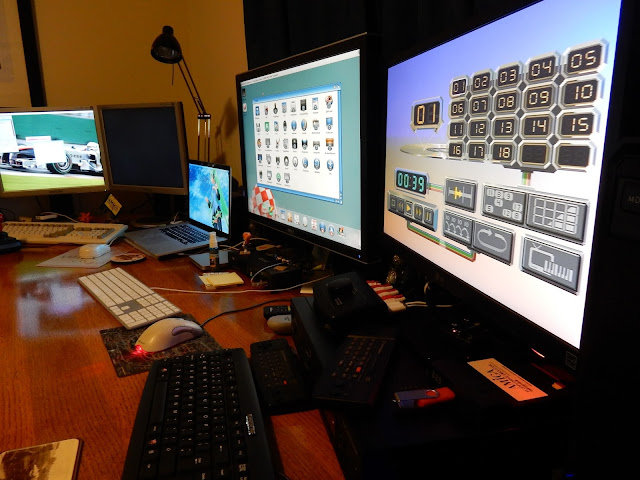 Adding extra monitors is not an option for me due to space, so I found a solution with my LG 24" TFT screen, as it has VGA, DVI and HDMI inputs which are switchable from the front panel.

I was using that screen paired with another identical screen on the X1000 as a dual display, but with Warp3D SI now working through the main card on the X1000 now, I no longer need two screens on it. I needed that spare screen for this project: 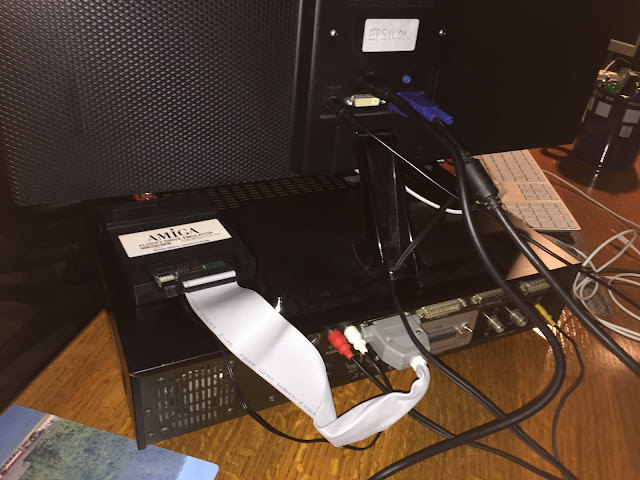 After some other work done on this weekend, the Core i7 PC now has two graphics cards in it - a Geforce 8800GT for Icaros, and a ATI Radeon 270X for Windows 10. Windows 10 can use both cards of course (so dual screen), while the Icaros setup can only use the Geforce 8800GT card. I covered more about my Icaros 2.0.3 setup on this Core i7 PC here. So now I can boot either one without swapping cables or hardware! :-)
The Geforce 8800GT card is now connected to the VGA input on the LG screen. 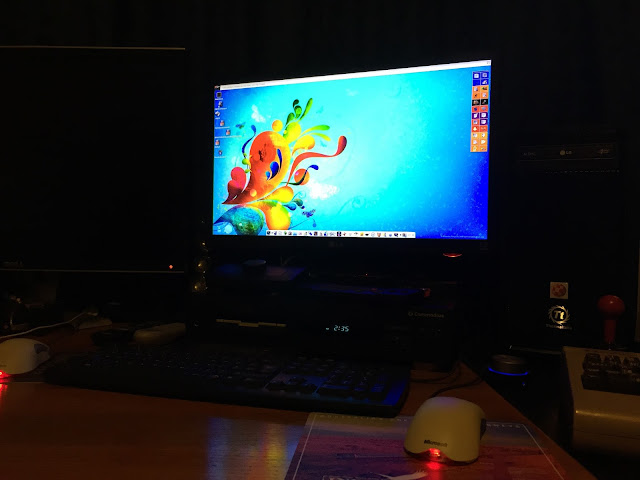 I used the opportunity to play some 3D games on Icaros 2.0.3 that I got working earlier this weekend also.

Return to Castle Wolfenstein on Icaros 2.0.3: 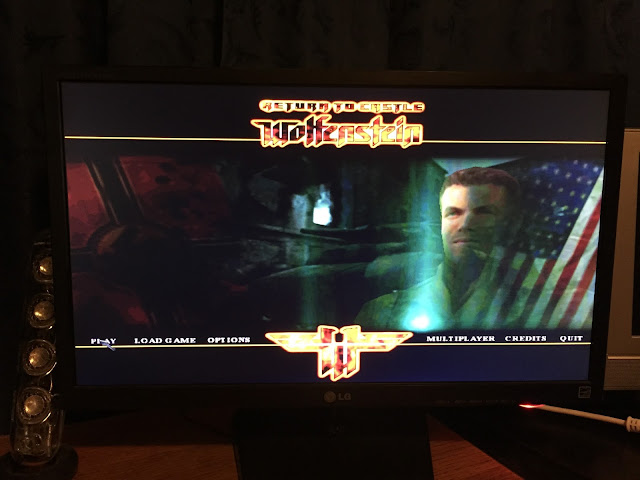 Played this game originally on PC and never thought I would see this game on a NG Amiga system, but here it is: 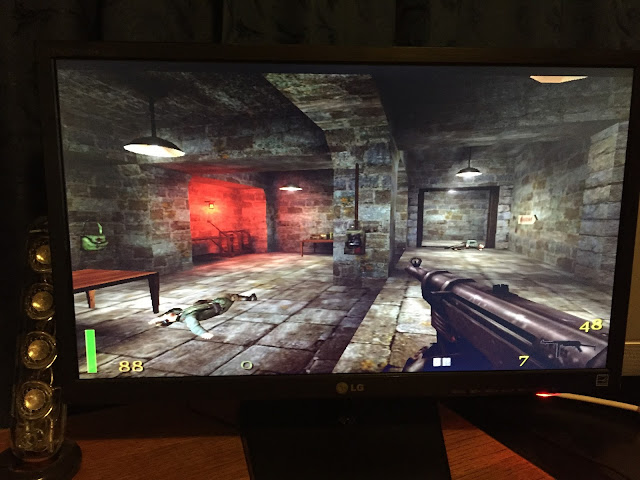 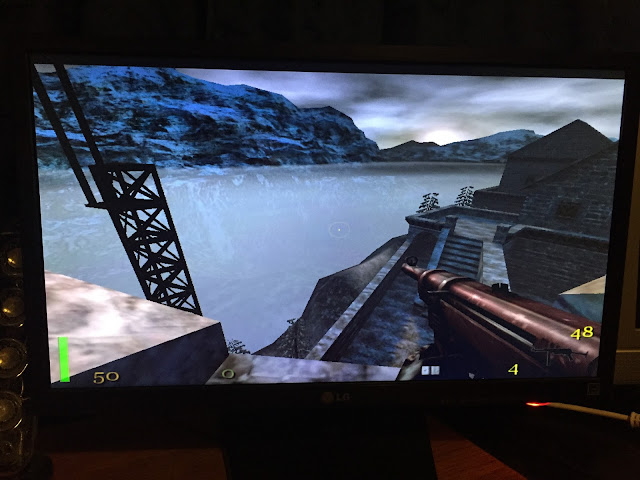 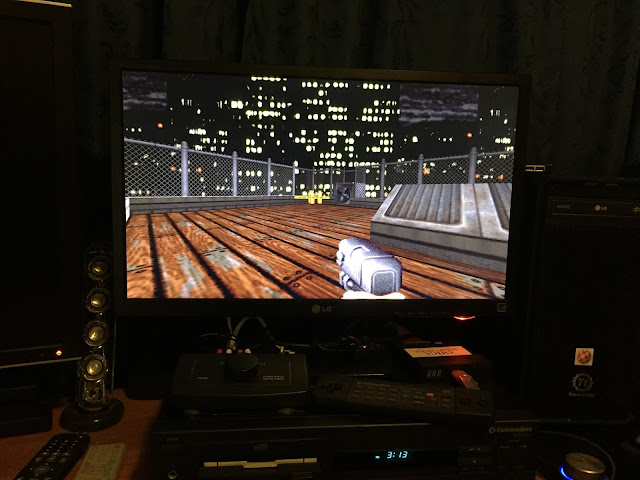 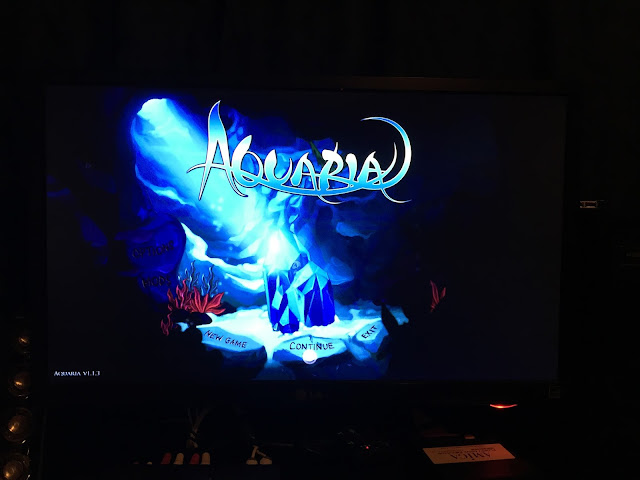 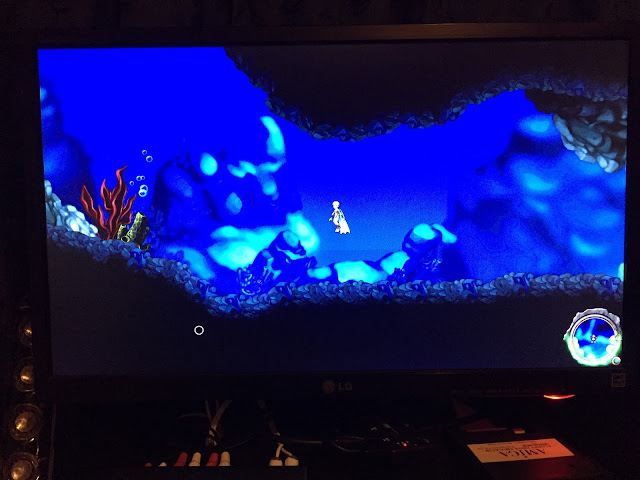 A work in progress is Doom 3 on Icaros 2.0.3, which at the moment only gets as far as the title screen. I hope to get it running soon as this game is quite incredible. 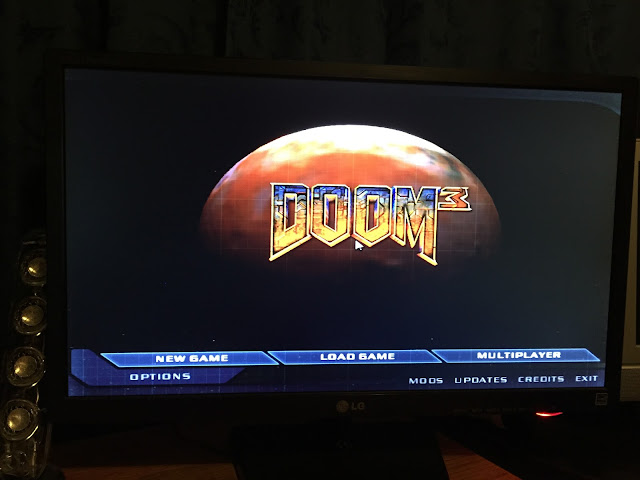 Let's move on to the Amiga CDTV side of things now!

The CDTV has AV out only, which led to my purchase this weekend at Jaycar (Electronics store in Adelaide) of a AV to HDMI 1080p upscaler box and associated HDMI and Audio cables! 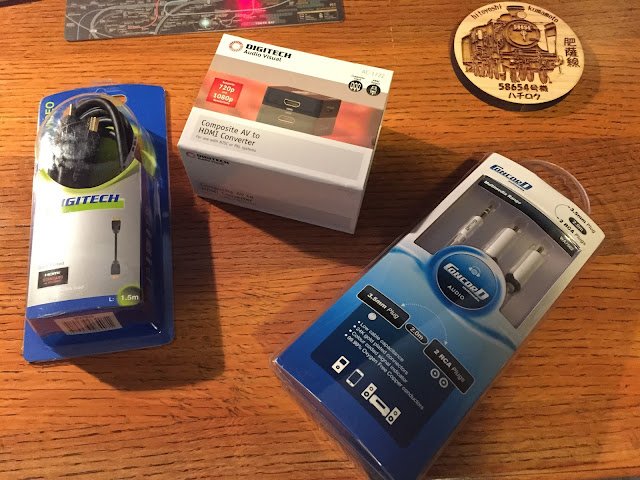 Here is a close up of the AV to HDMI upscaler. It is powered from USB port connector, with power supply included. It also can use 720p instead of 1080p. Why you would want to use 720p I have no idea - does anyone have a 720p only HDMI display these days? 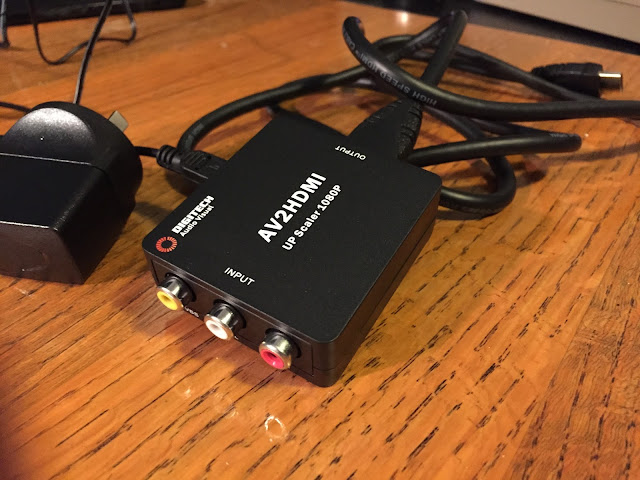 Pretty soon I had the CDTV hooked up the HDMI input on the screen.  It looks great. 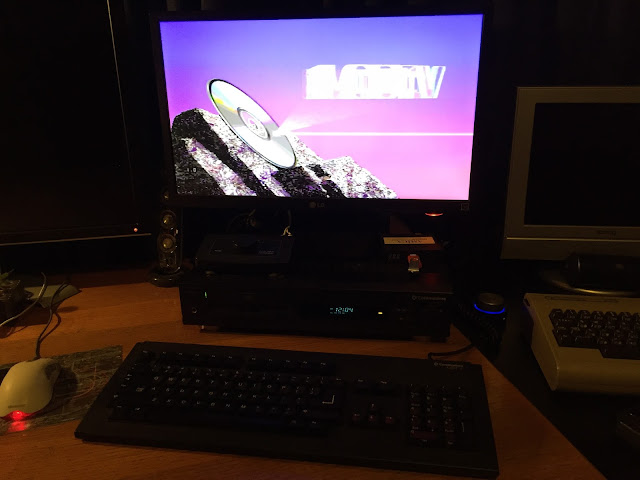 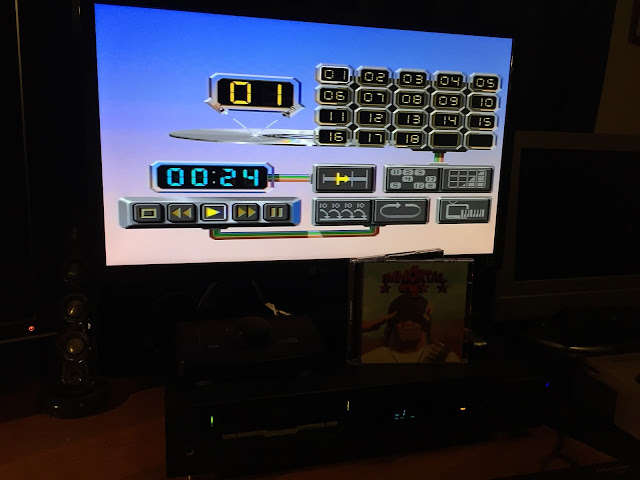 I didn't connect the audio to the upscaler because I am not connecting it to a TV (which would have it's own sound output). Instead I fed the audio from the CDTV separately to a audio switch box that is connected to a subwoofer and speakers. I used this same switch box when I exhibited at AmiWest 2014 last year. 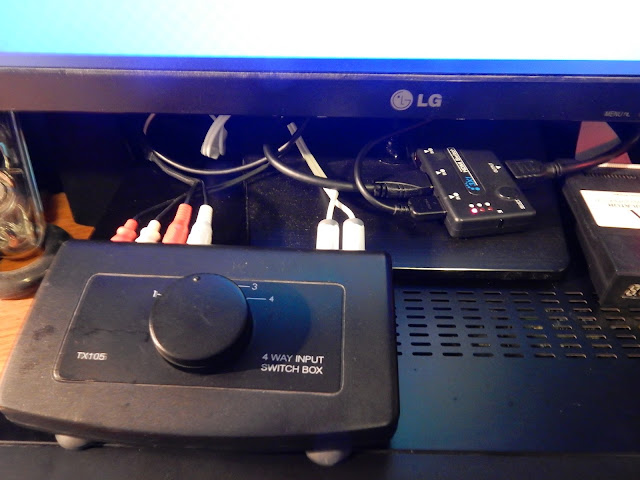 Here is the CDTV playing back Immortal 4, the remixed Amiga game tune CD - the speakers are hidden behind the screen due to space constraints: 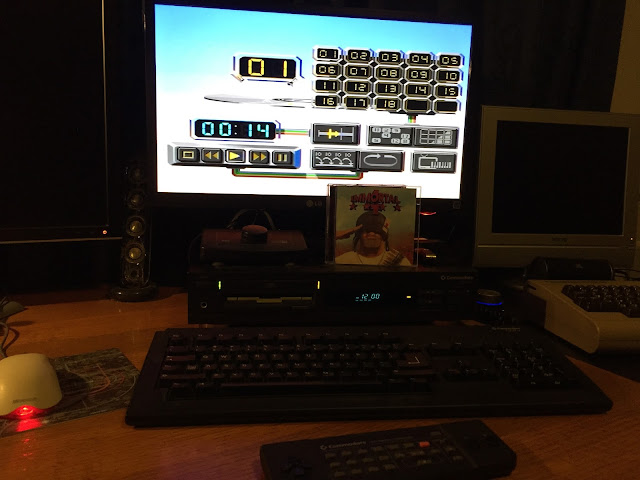 I also got a HDMI switcher box (with remote), which allows me to switch up to three HDMI inputs. 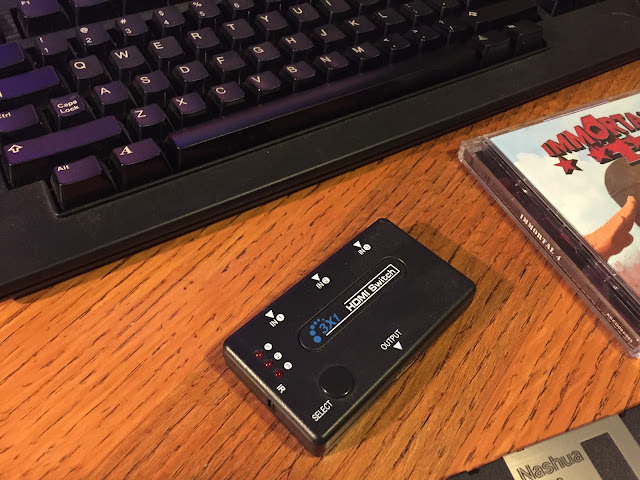 This doesn't need external power and I am using it to switch between the CDTV HDMI output and a separate VidOn.Me Android Media box I received a while back for free (came with a DVDFab software purchase) but never used until now. It also has HDMI out.

The VidOn.Me box is very compact, with wireless support and I have attached a USB hard disk on top with various videos and music to play on it: 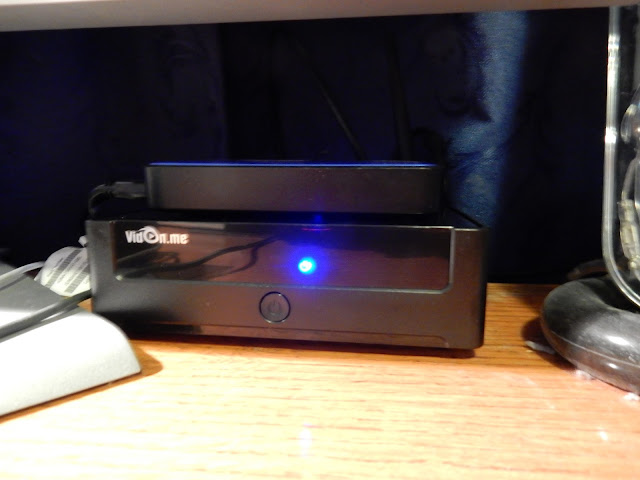 VidOn.Me in action on the LG 24" screen, switched from the CDTV using the button on the HDMI switcher: 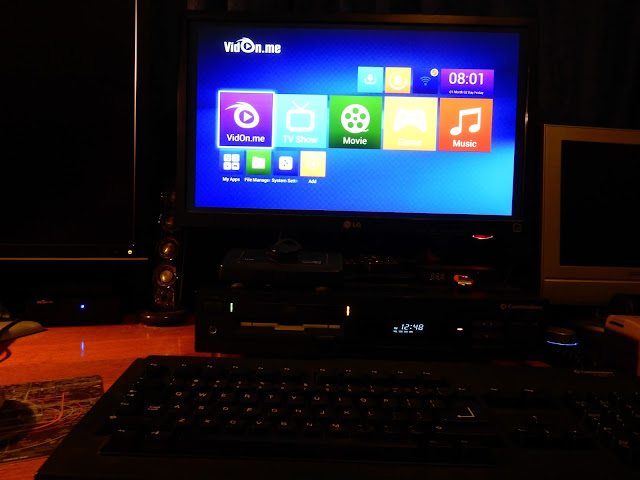 Playing back 1080p videos works a treat. I look forward to being able to do this on my NG Amiga systems soon too hopefully :-) 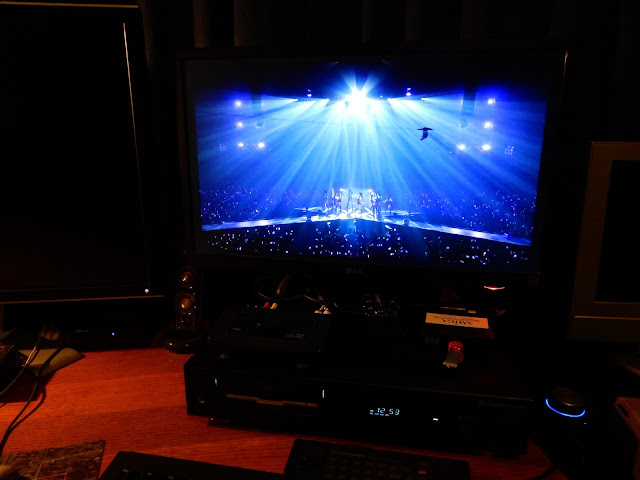 The final part was to squeeze in the Sam 460CR system in between the LG screen and the C64, and hook it up to the DVI input on the LG monitor - it only just fits but hey - it fits! I removed the CDTV keyboard (as it isn't needed to use it) and replaced it with the AmigaOne keyboard and mouse for the Sam 460CR.

The Sam460CR's audio is also put into the audio switch box, along with the CDTV, VidOn.Me and C64. All full up. 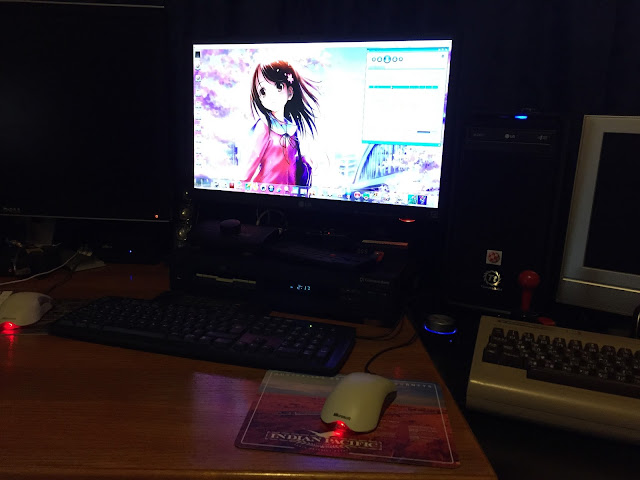 With an eye watering amount of electricity running, I quickly grab a shot of all of the machines in action before returning my usage to a sane level!

The MacBook Pro is running AmigaOS4.1 Classic emulation under FS-UAE on the 30" screen, which along with the audio, keyboard and mouse is shared with the Core i7 PC via a separate DVI-D switch box (needed to support 2560x1600 screen mode for the 30" screen).

As you can see it is a tight fit indeed, but it works, with enough room to use the keyboards on all the systems without moving things around: 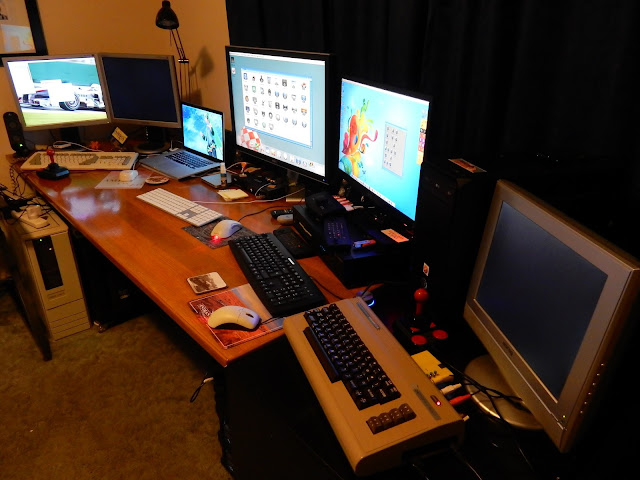 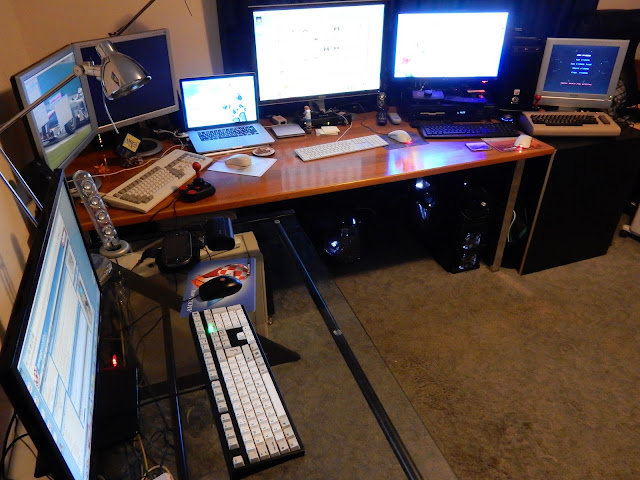 I was so tired after getting all this done, but I think the end result was worth the effort!

I know other people have much more impressive and bigger computer areas with far more computers than me, but I am happy with it as it is right now.

That said, I am forever tinkering with the setup as I take on new projects, so I definitely won't say it will remain like this!

Also, this weekend I was relaxing with the X1000, and getting some accelerated games working on it has been great also! 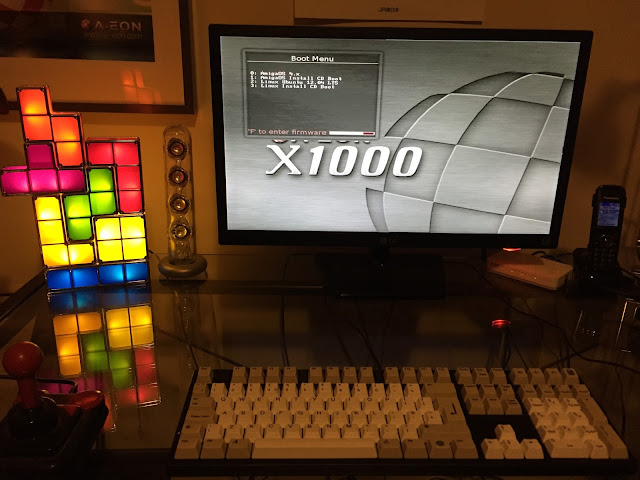 For those curious, the Tetris light thing was a present for my birthday, and can be reconfigured in any number of ways by placing the Tetris however you want - power is connected to each piece via the Tetris piece edges which transmit power when touching another piece. You can buy them from Thinkgeek.com. 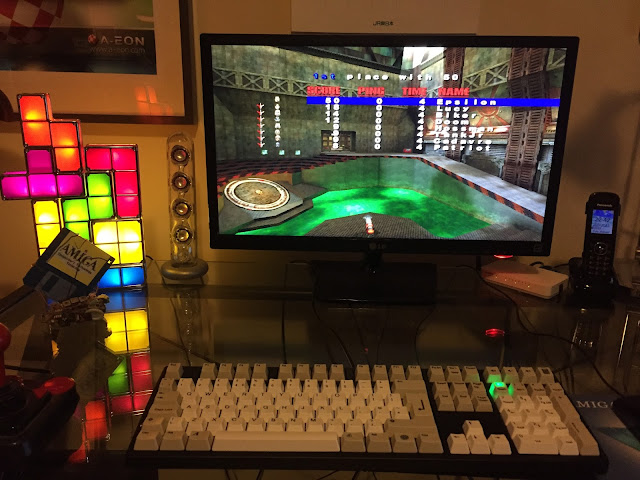 Some Warp3D demo time on my X1000 courtesy of demo group Universe: 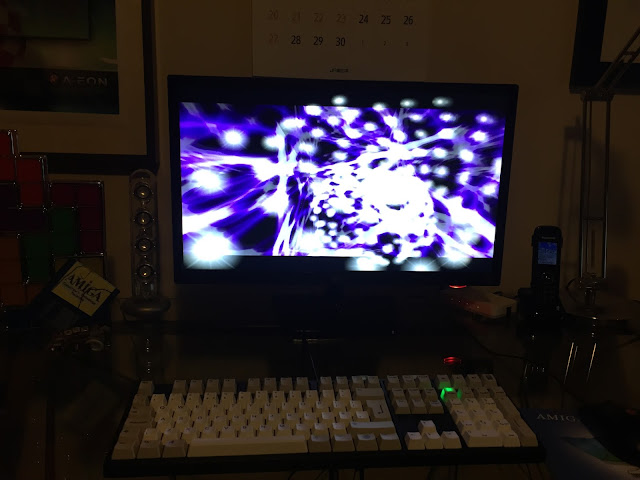 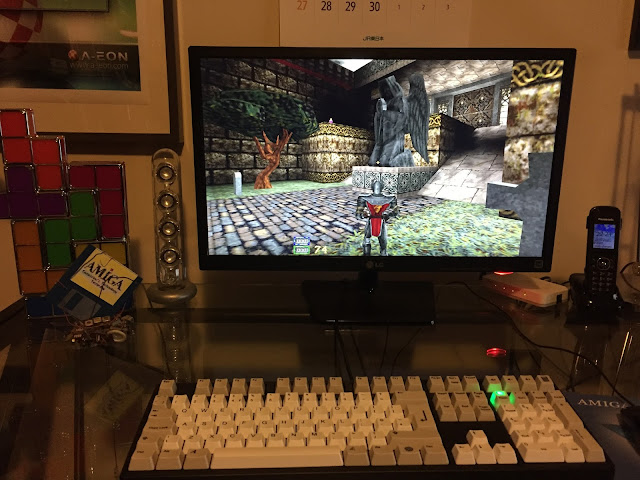 Amiga systems in NG or Classic form are still a lot of fun in 2015!