Recently I was given the opportunity to purchase another X1000 in Australia second hand for a good price. With what happened to me earlier this year, I decided it was a good idea to have a backup X1000 system, especially now they are sold out. I bought it and it arrived here last week! 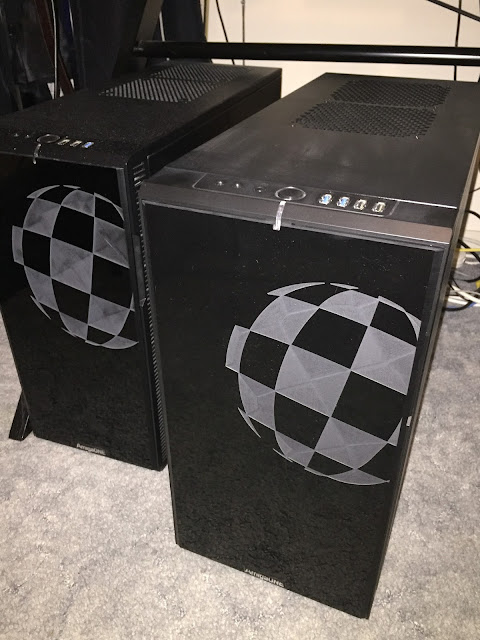 What surprised me when it arrived is the much larger (wider) size of the R4 case, compared to the R3 case of my original X1000. 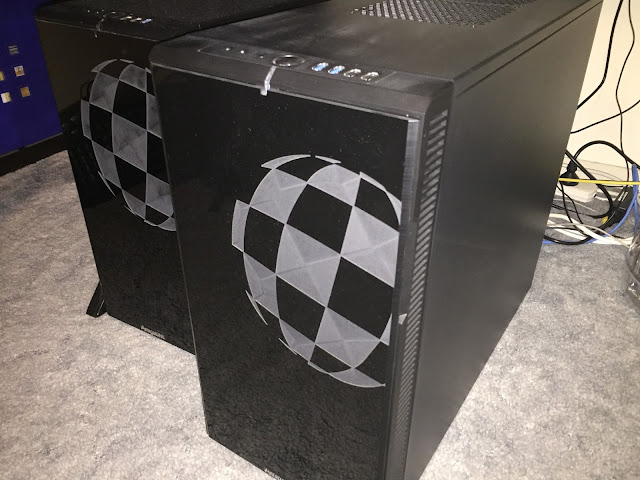 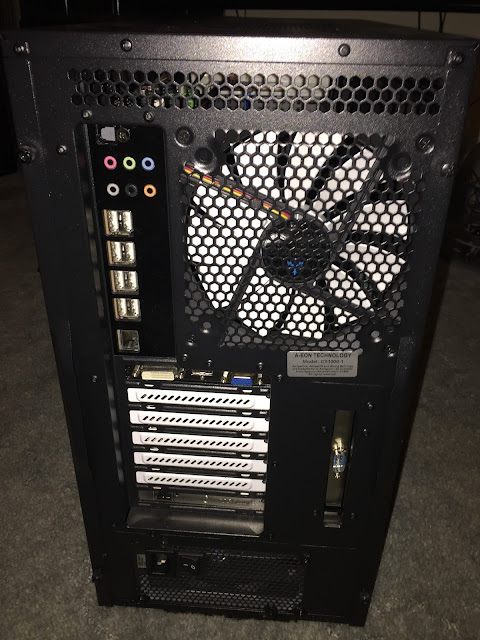 The next shot shows inside my "new" X1000 - unlike my original X1000, this system has 2GB of memory instead of 4GB, and the standard Radeon HD card (non-Warp3D capable). 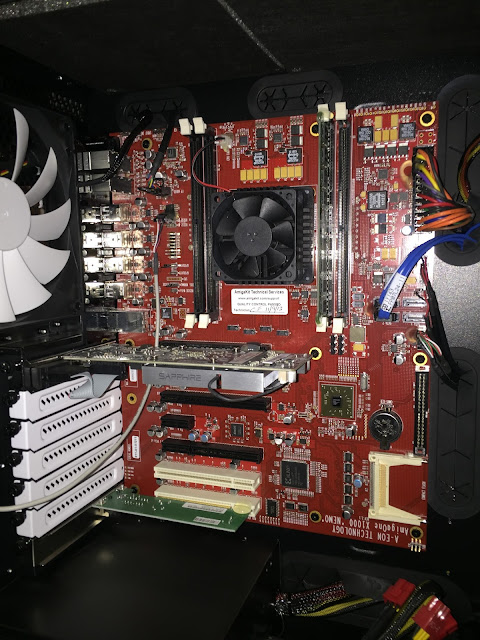 I needed to check all the cables and cards where pushed in correctly - some had moved a bit in transport like the network card, and needed a push in to be firmly seated before powering on for the first time.

This system has a 1TB SATA hard disk in it, installed with AmigaOS 4.1.6 and almost stock condition - very clean inside and out. Here it is below, once powered on to check it is working ok after transport - All good! 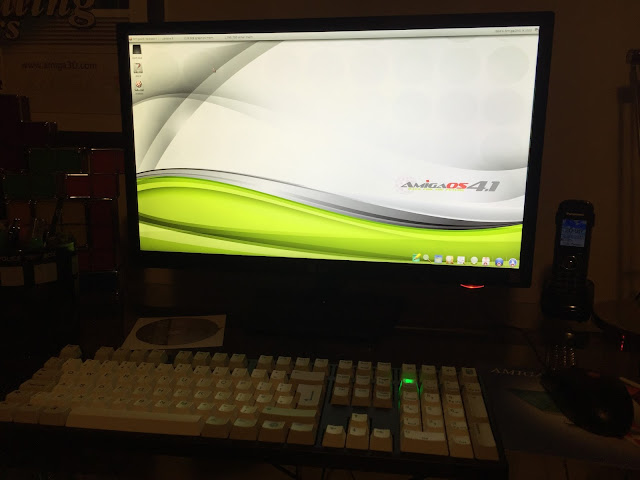 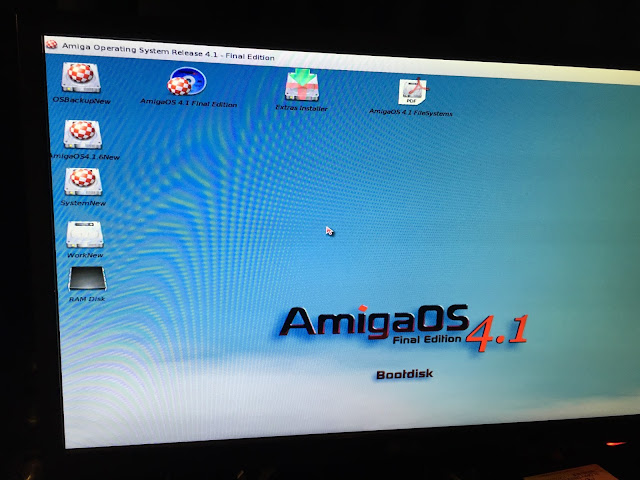 I have covered in a lot of detail previously how to prepare and install AmigaOS 4.1 Final Edition on the X1000 - to save covering old ground again, if you are interested in how I did this then please check the two part blog posts where I cover it step by step - Part 1 and Part 2.

Once the installation of Final Edition was completed, I then set about getting it configured to my liking and transferring my X1000 data across so I have a full backup X1000 system: 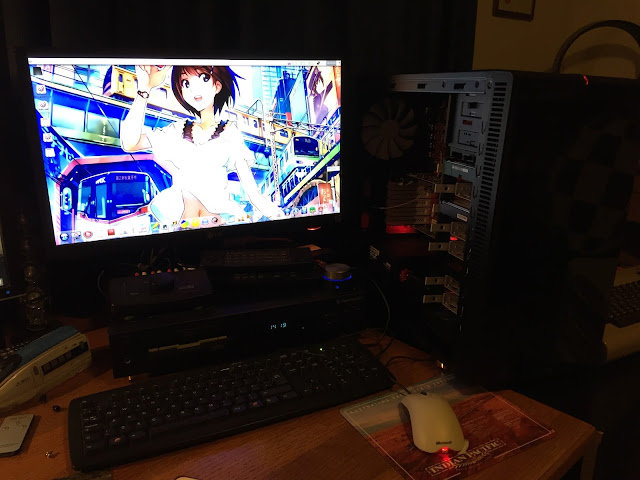 Have to admit that fitting the X1000 into the location where the Sam460 was before is quite a squeeze and doesn't really work well with the C64 blocking the front door. Not sure if it will stay here permanently, but for now this is where it lives! I put the Sam 460 away in storage for now. 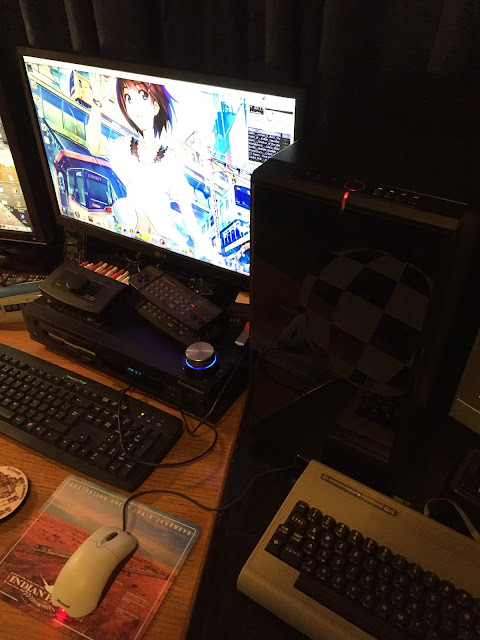 I might have a go at putting Linux onto this X1000 in the future, but for now I am glad to have the backup X1000 system running AmigaOS 4.1 Final Edition!

On the subject of the C64 in the photo above (a bit off topic but still Commodore related!), this week I received my 1541 Ultimate II, which is a C64 cartridge that allows me to run tape and disk games as image files from MicroSD card, in a similar way that the sd2iec and Chameleon64 add-on's I covered in my earlier blog post here do. You can order it from this website, but I believe the next batch of units might be a while. 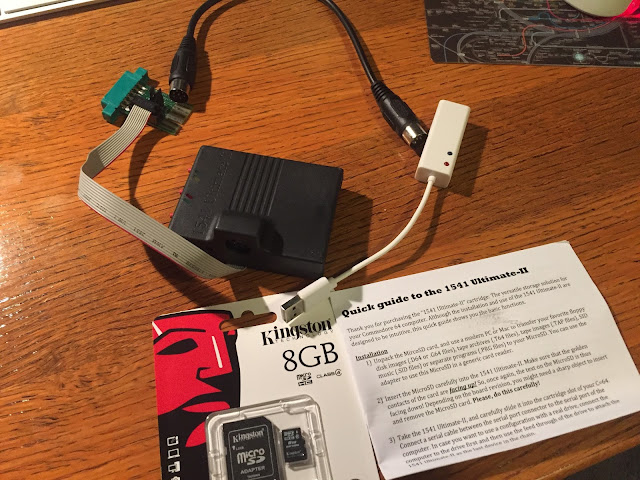 The guide was very useful to get up and running with the 1541 Ultimate II and is a definite read first!

For the unit I bought, I opted to have the optional tape connector fitted, which allows the 1541 Ultimate II to feed tape image files through the tape interface, just like a real tape drive would do: 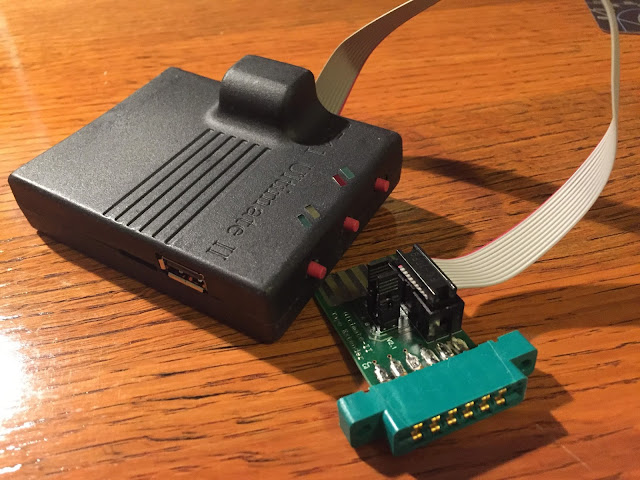 The tape connector had a pass through connector as well, in case you still want to connect a real tape drive unit to it: 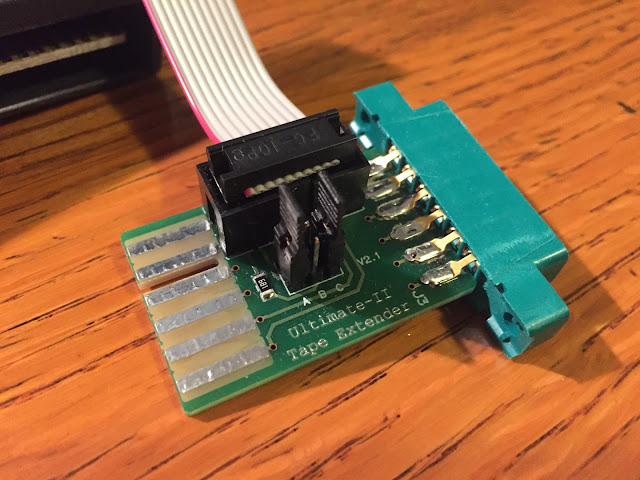 The USB to network connection option I also purchased, although at the time of writing this functionality is not enabled yet.

Once the 1541 Ultimate II is plugged into to the C64 cartridge port, the 1541 disk cable (included) connected to the disk drive port, and tape adapter into the tape port we are ready to power on.

On power on I got the Retro Replay boot screen, which allows you to preload a cartridge image containing the Fastload cartridge functionality before loading any disk or tape images: 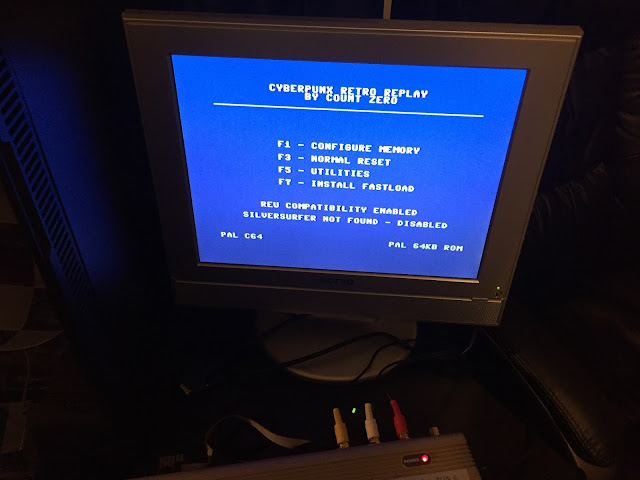 By pressing the middle button on the 1541 Ultimate II, I get to see the SD Card, which I have already put all my disk images on, ready to try out: 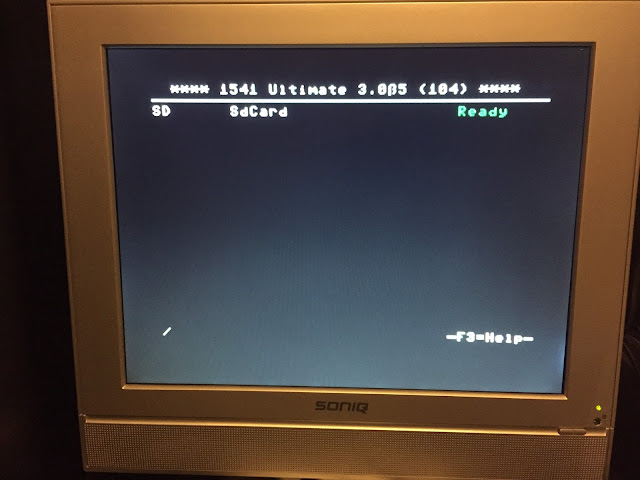 Apparently you can connect usb sticks to the usb port on the 1541 Ultimate II to load image files from too, although I didn't try this yet.

It is simple to select the disk image (or tape image) on the SD card using the menus via keyboard on the C64, and then mount the disk image, ready to load a program from it: 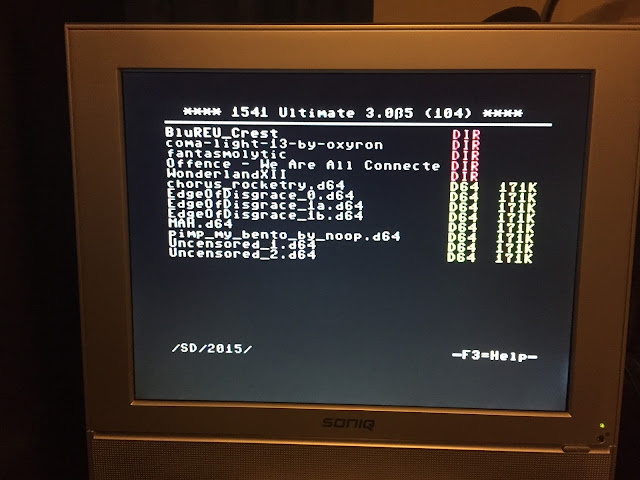 A slight complication for my C64 setup though is the need to set up the 1541 Ultimate II to use device #9 rather than the usual #8. This is because the sd2iec is installed internally and already has that drive designation. Fortunately changing this configuration is easy enough in the settings: 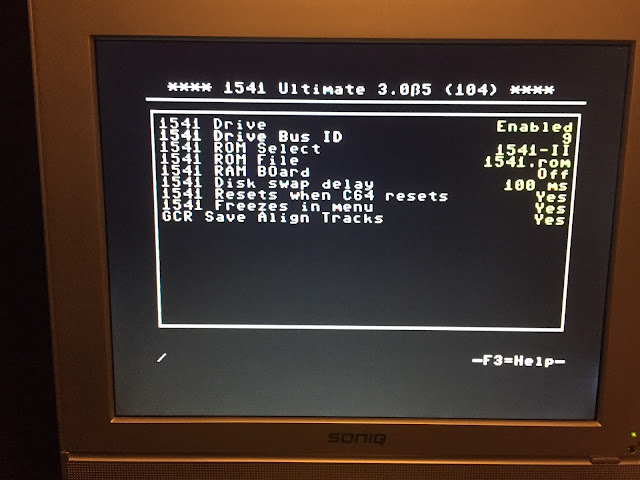 Once mounted, from the standard C64 prompt I type in LOAD "*",9,1 and then RUN to run the disk I have mounted. 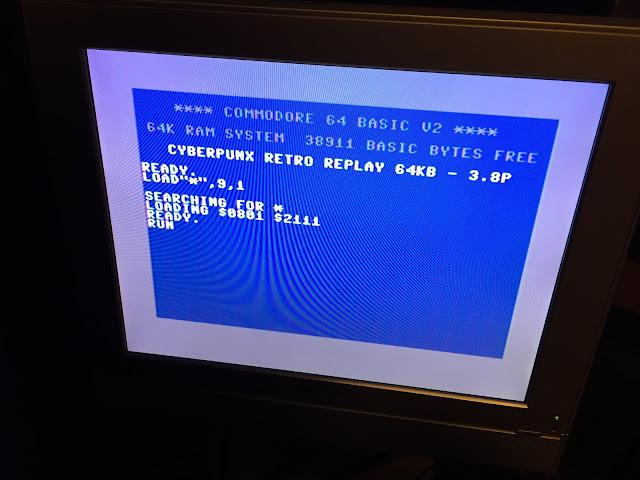 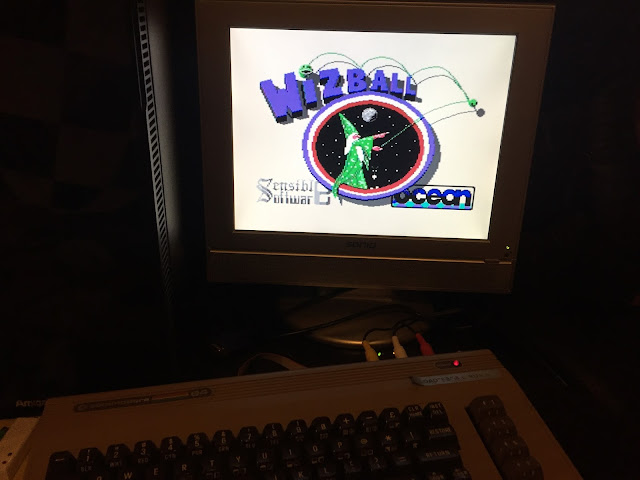 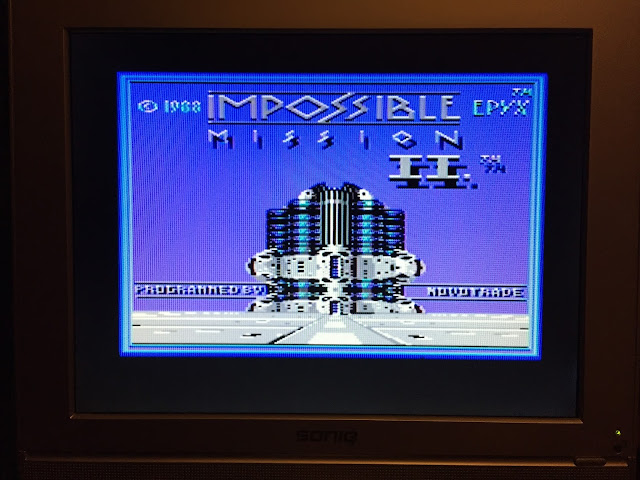 I know this is a bit off topic (sorry!), but I wanted to show the 1541 Ultimate II device on the Commodore 64 as it is a neat device! I purposely do not have a disk drive or tape drive with my C64, and I rely on the image loading functionality of these modern add-ons to provide the ability to load games and demos on the real C64! The retro fun without the large disk & tape collection and associated long disk/tape loading times from real drive hardware! :-)