One of my planned projects for some time has been to add an Indecision ECS to the Amiga 1000. However this goal has continued to elude me for one reason or another, but I decided to give it another go this weekend. 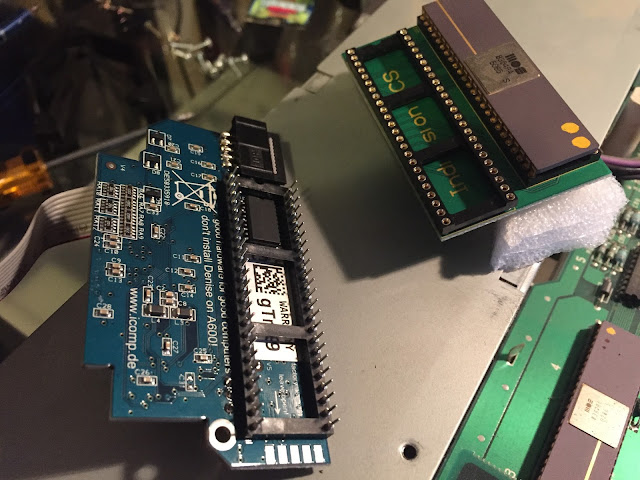 Because I don't have any old 1084, 1940 or 1960 monitors anymore, all my Classic Amiga equipment needs scan doublers installed to be able to run with my TFT screens. From when I bought the Amiga 1000 in 2015, I have had to use an old Amiga 1200 external scan doubler which doesn't work very well (it does work though) with it. 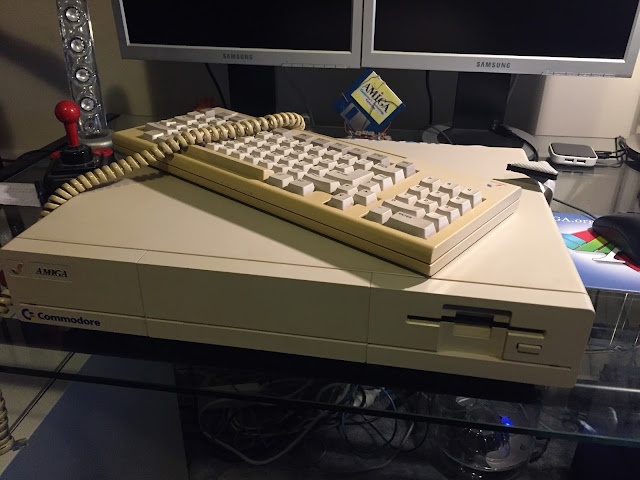 Since owning this Amiga 1000 I have added a gotek, memory expansions, and this year even tried running an ACA500 on it!

Today though, is the Indivision ECS.

Looking at the back I am not sure how I can mount the VGA port on the A1000 case without drilling a hole in it - any suggestions? 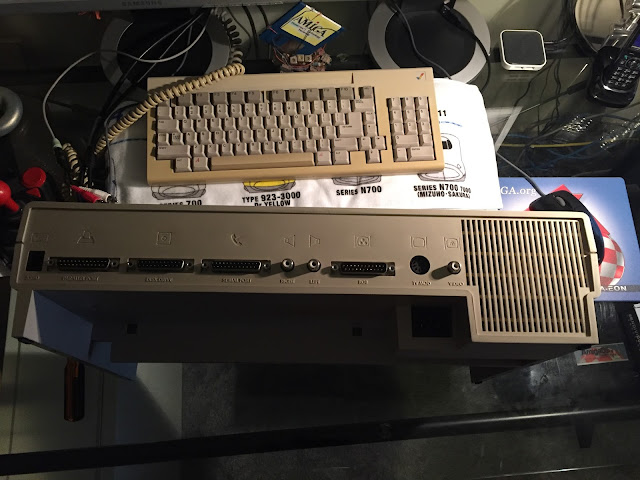 Pulling the case off the A1000 reveals the signatures on the inside of the case, including the recently departed Dave Needle, Rest in Peace mate and thanks for this wonderful computer. 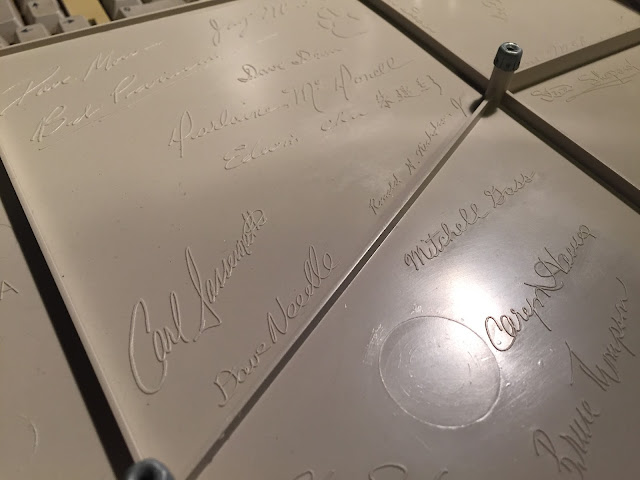 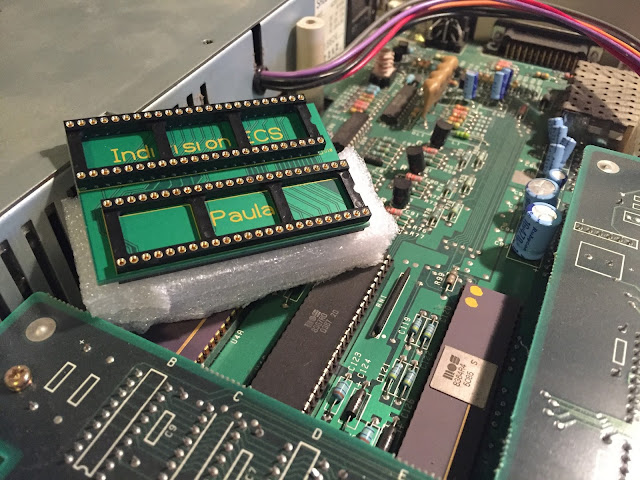 The converter came with this really helpful german language explanation - thanks, very useful. 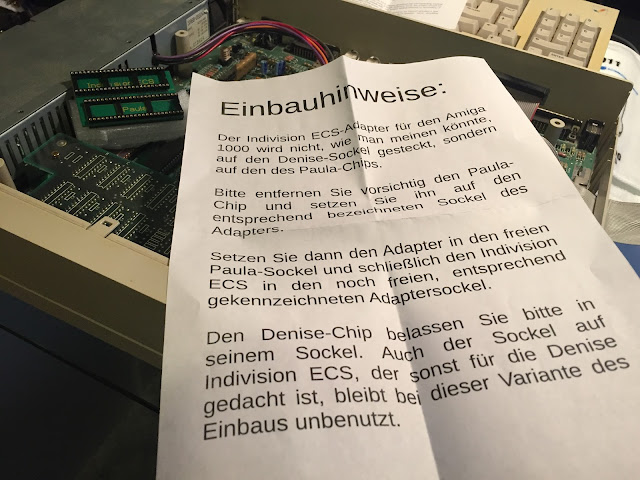 For those unable to read or speak German like myself, this is no help at all.
Fortunately Amigakit includes a guide on how to install it on the Amiga 1000 here. 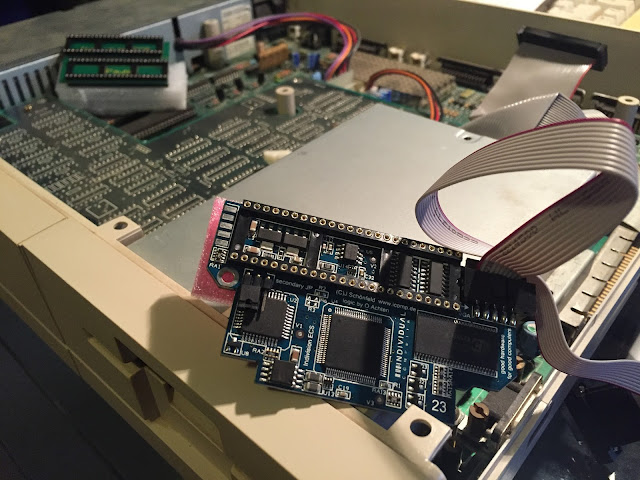 I set to work, removing the Paula chip from the Amiga 1000 board, which is the chip marked 8634. Will never understand why they didn't label it Paula...anyway, it is the third chip shown in the shot below, on the right side closest to the daughterboard. 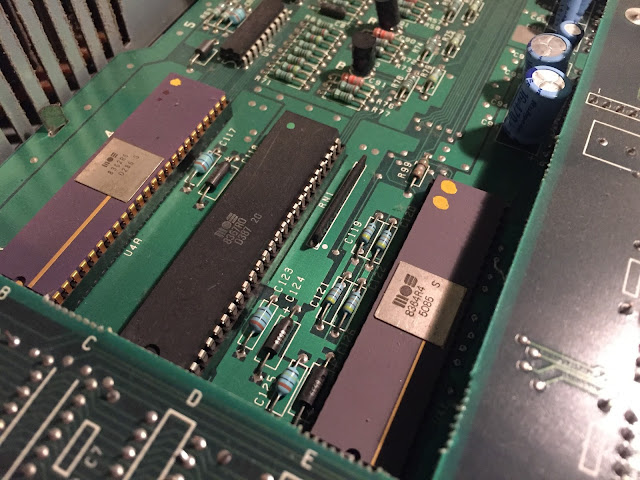 Here it is removed with a chip extractor. 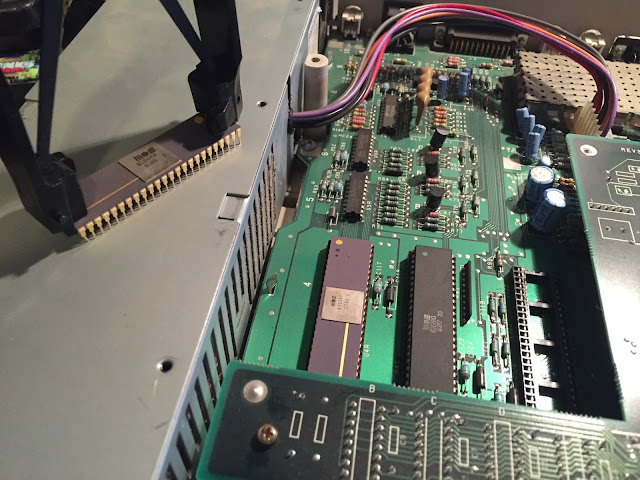 Yeah, I bent one of the pins..but I fixed it easily. The pins on this chip are really soft. 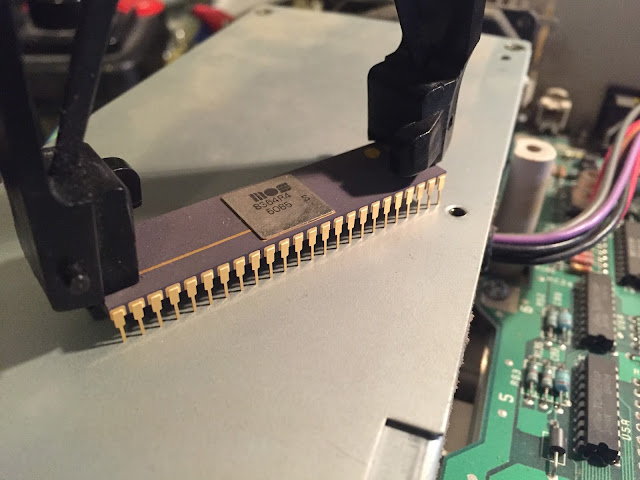 Here is the Paula chip next to the converter: 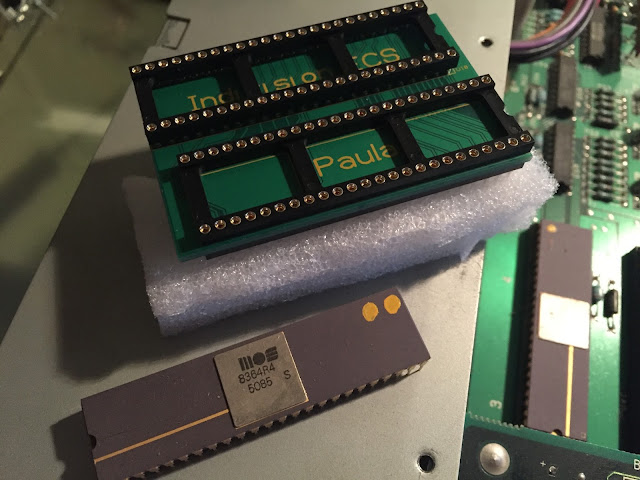 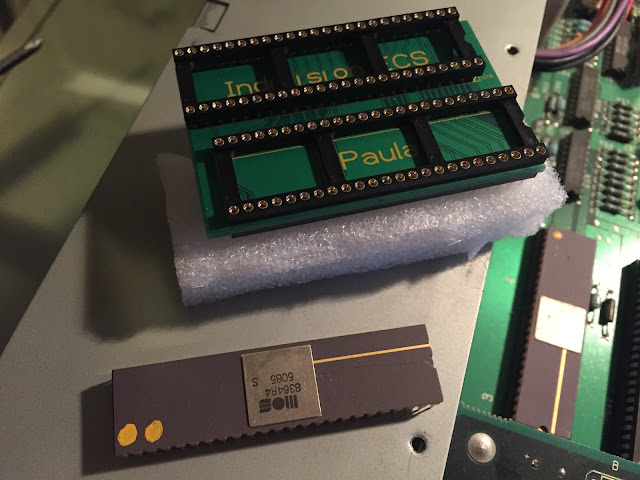 Here it is installed on the converter: 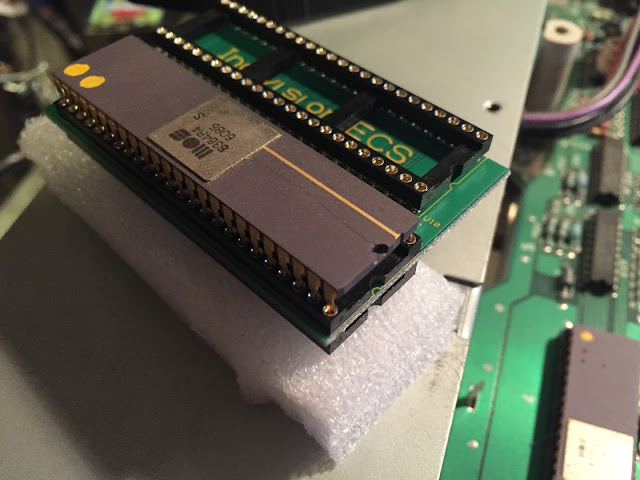 Here it is installed. I left the foam protecting the pins on the Amiga 1000 converter while doing this. 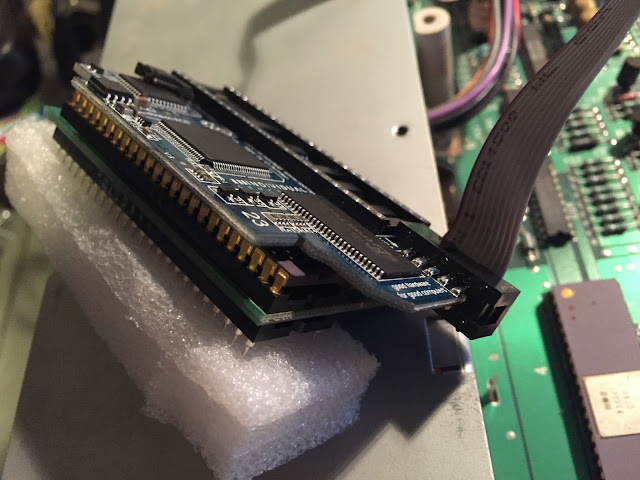 I then realised it is not possible to install this into the Paula socket on the Amiga 1000 unless you remove the daughterboard first... 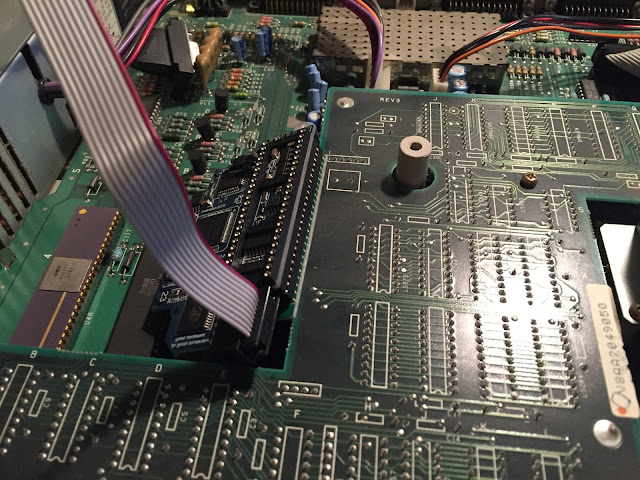 So a few minutes later and the daughterboard is removed: 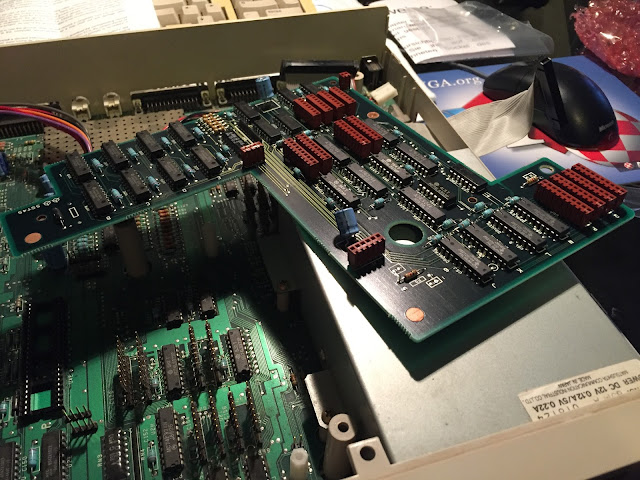 Now this is where I got stuck! 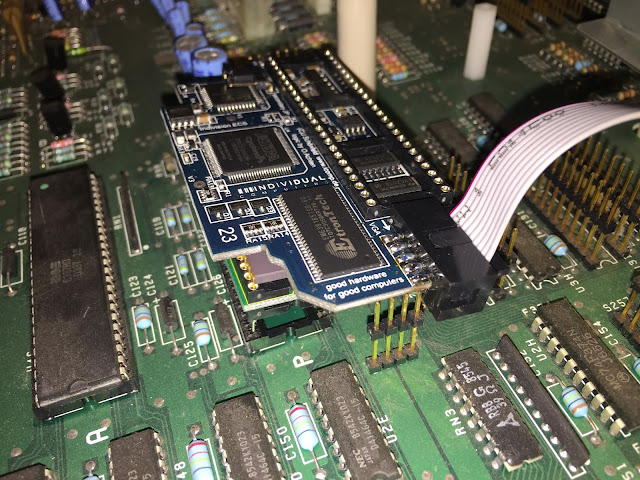 Not by much mind you, but it doesn't fit. The pins needed for the daughterboard are covered by the edge of the indivision card: 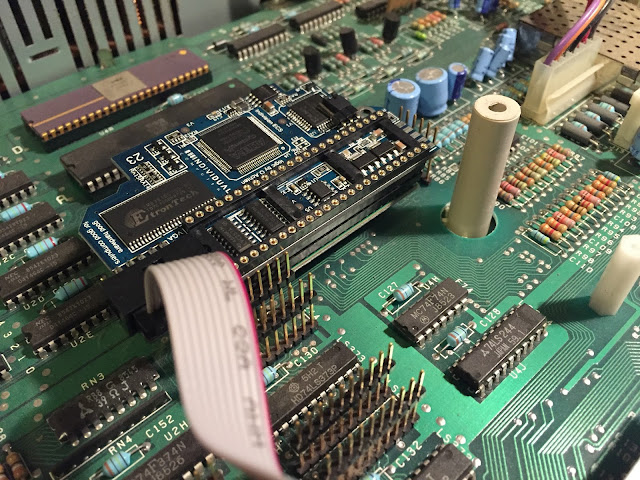 This shot shows the problem better, you can see how the pins need to be bent out in order for the amiga 1000 converter with Indivision ECS card installed to fit: 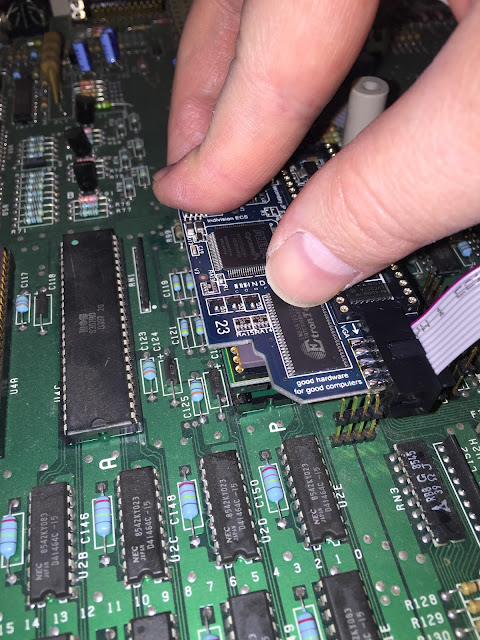 I was thinking to myself, why can't I just reverse the direction of the whole thing, and thing all the chips so they are the opposite to normal? That would work right?

After my experiences with the X1000 though I was not willing to chance my A1000 to find this out. But please let me know - this sounds reasonable as a solution right? 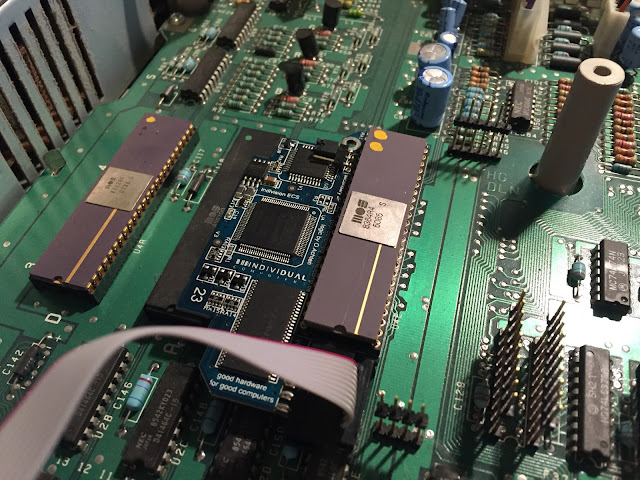 I tried that, and it fitted on the Amiga 1000 without a problem. 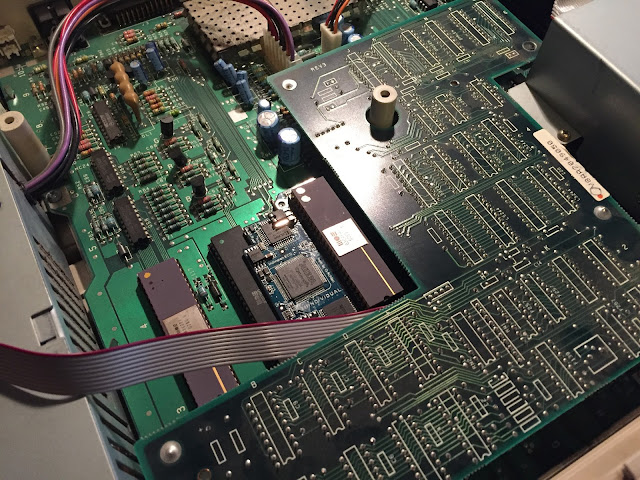 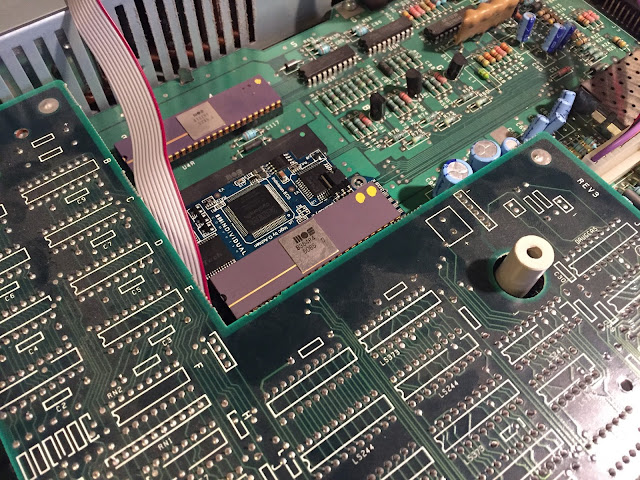 Unfortunately though, the indivision didn't do anything when powered on for testing. I believe it should be the denise chip in that socket anyway so it makes sense that it didn't work. 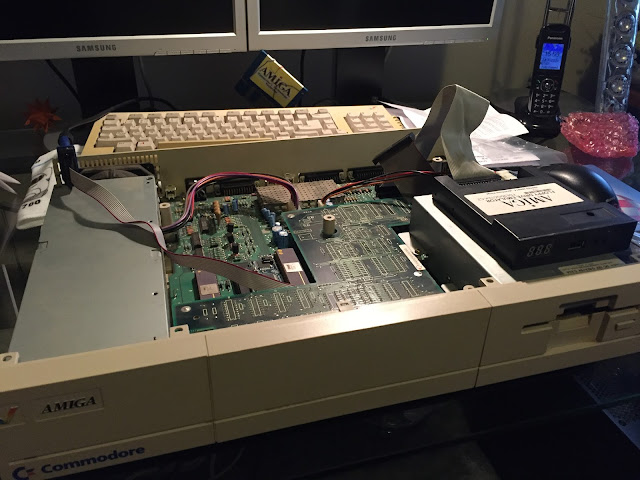 So for now I put everything back together minus the indivision and converter, and made sure it still worked, which is does. I even tested the Rys Mark II usb mouse adapter on the Amiga 1000 while I was doing that, and it works perfectly. 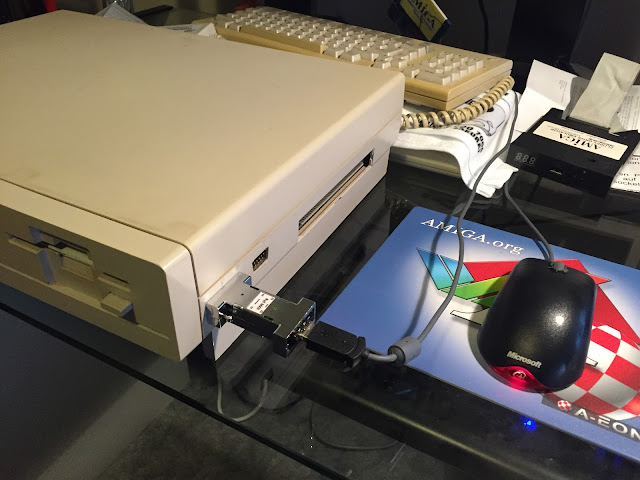 I will revisit this again soon if someone out there can tell me how I can get the converter card installed in the Amiga 1000 without bending pins...