My Amiga 500 has arrived

So this weekend I received a surprise to play with from George, the president of the Adelaide Retro Computing group - a stock standard Classic Amiga 500! Thanks mate! The first challenge of course being that it doesn't work and I needed to work out why before I could use it! 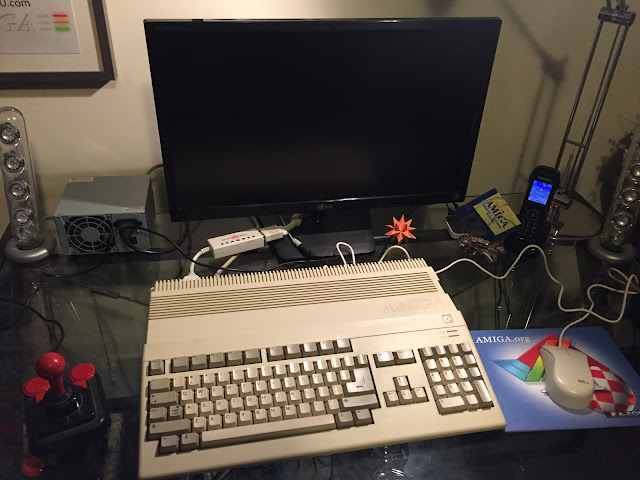 When I hooked up the Amiga 500 at home with my external scan doubler to VGA converter it flashed the power led and the screen was Yellow. Not a great start!

I took a few pictures of the Amiga 500 itself, which seems in good condition externally: 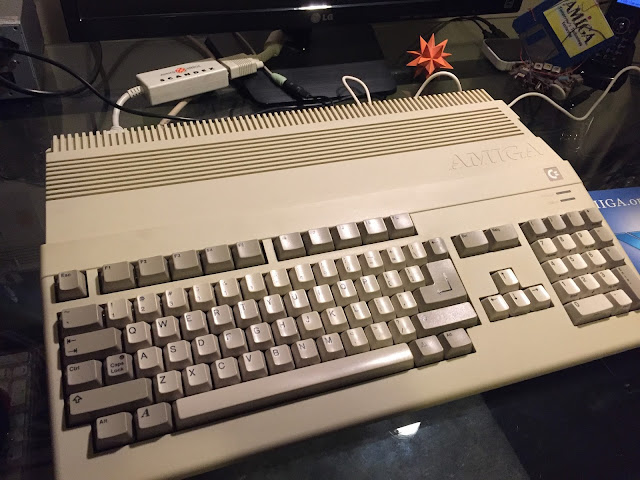 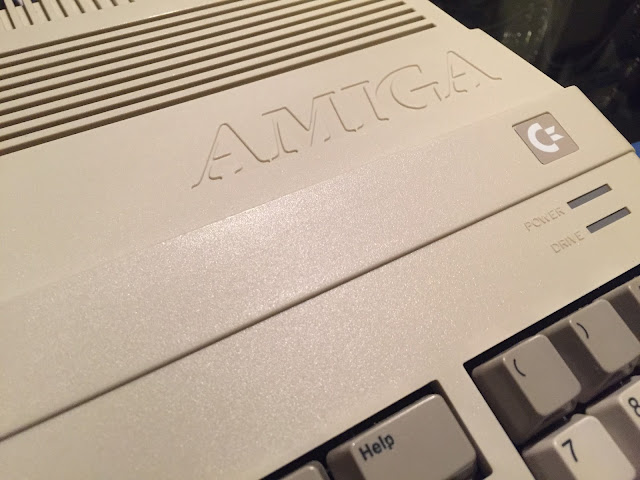 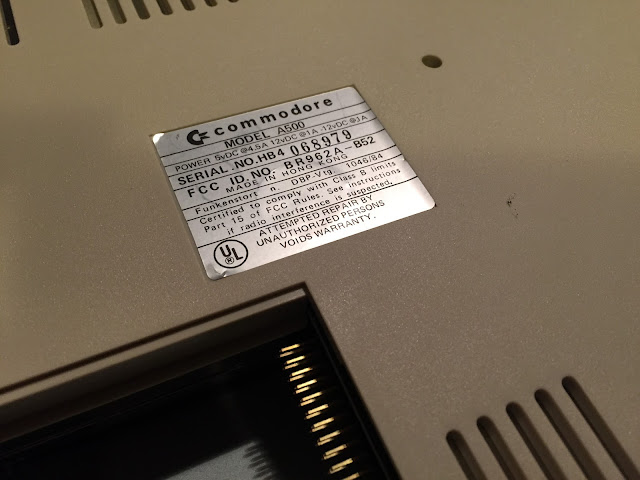 So I pulled the case off the Amiga 500 so I could have a good look around: 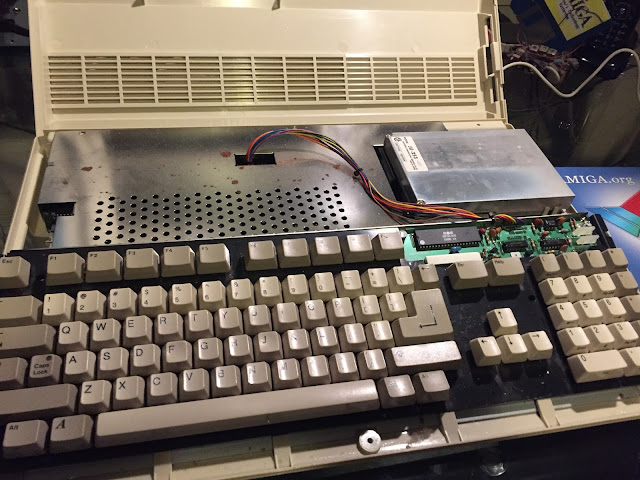 I then remove the metal shield protecting the motherboard, exposing the A500 board: 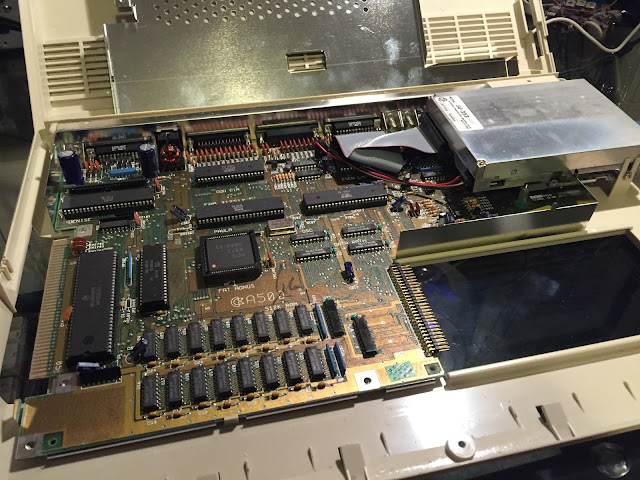 A quick snoop turned up that this particular Amiga 500 is a Revision 5 board, and has a Fat Agnus chipset, meaning it is an ECS machine (not OCS). 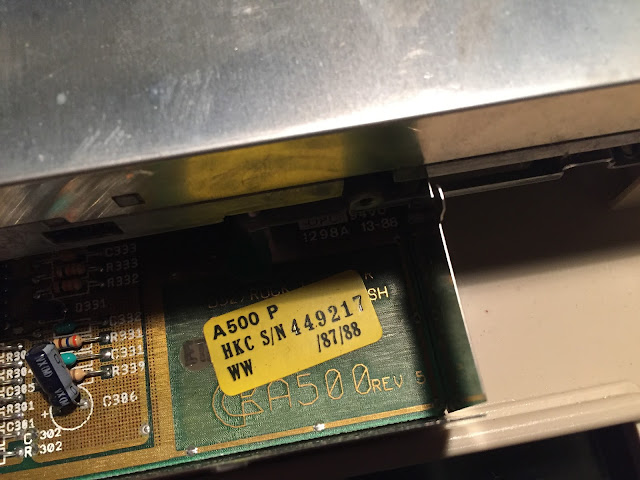 Here is the yellow screen - apologies for the strange lines, but the external Scandex scan doubler I was using is poor quality - but good enough to see what is going on for now: 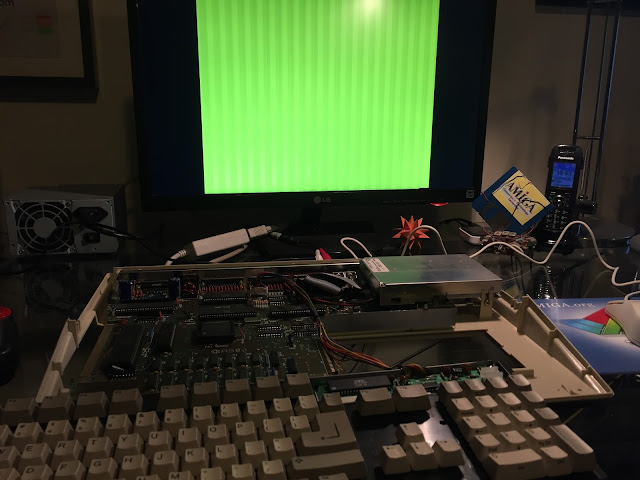 The yellow status screen means either the CPU or an expansion card is faulty. Since no expansion cards are installed, that means the 68000 CPU is not working...

Luckily for me I have a spare 68000 CPU I could slot in, so I set to work removing the old one and putting in the new one. Below is a pic of the new one installed on the left and the old faulty one nearby on top of the Fat Agnus chip: 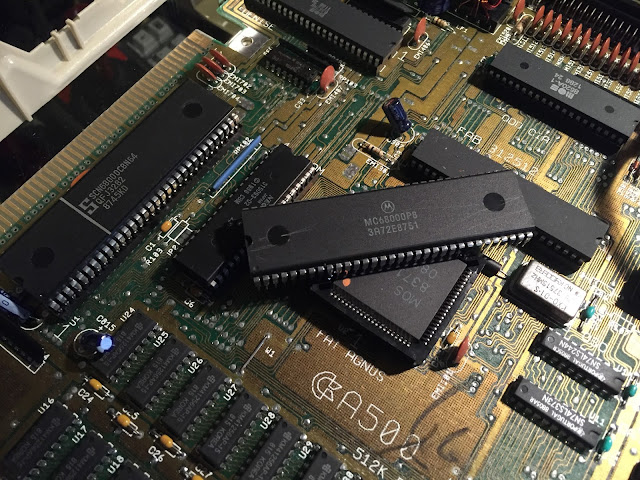 So I powered on the Amiga 500 again and bingo, I get the insert disk screen - excellent! Next up was trying out the floppy drive, which I quickly found was faulty. 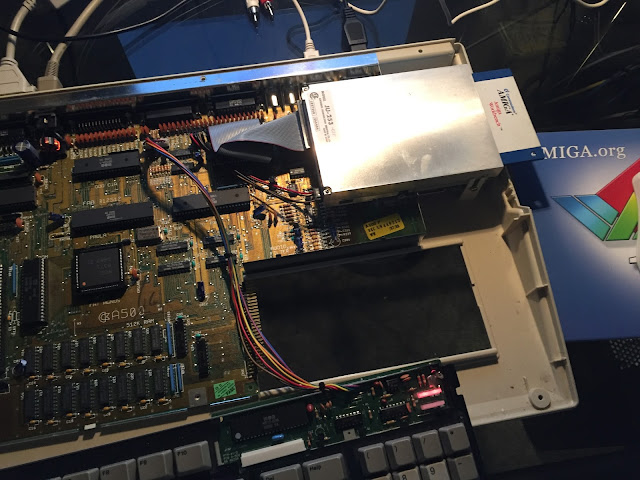 Since I didn't have an immediate solution to this, I decided to connect up my ACA500, which I think will be perfect for this Amiga 500! 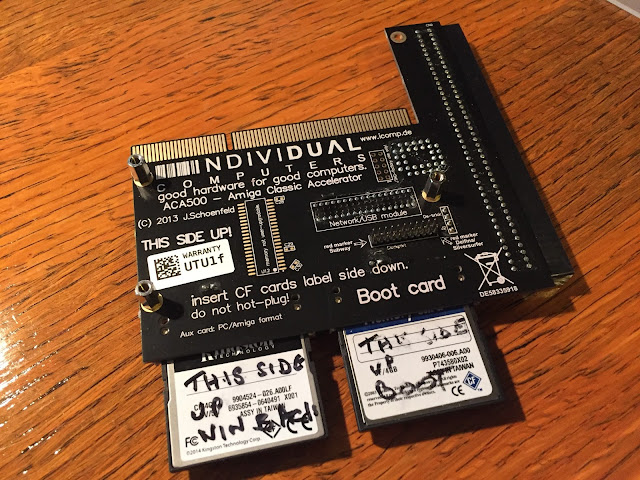 I used this previously on the Amiga 1000 back in this blog post if you would like to see more information about the ACA500. 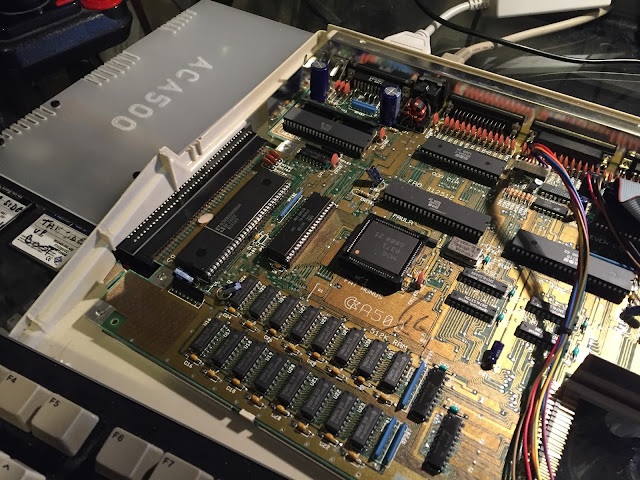 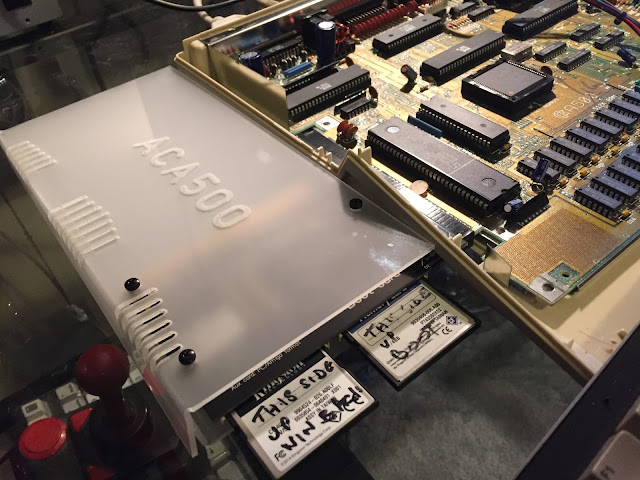 The ACA500 worked straight away and I selected the Kickstart 3.1 boot up, which soft kicks the 3.1 kickstart into the ACA500's memory, and then boots the hard disk from the CF card: 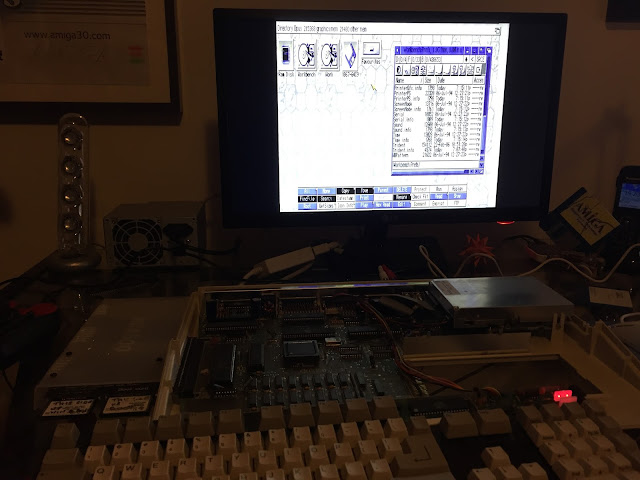 That being done, I set about fixing the awful video output. I bought a Indivision ECS to install into the Amiga 1000 a few months ago but that didn't go well! So it seemed the perfect opportunity to install it into the Amiga 500: 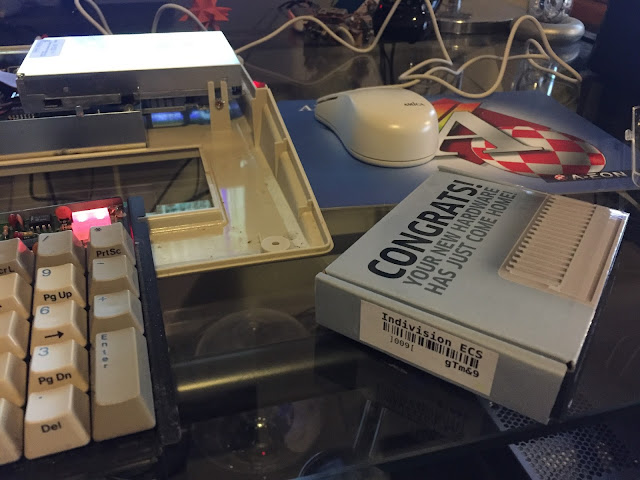 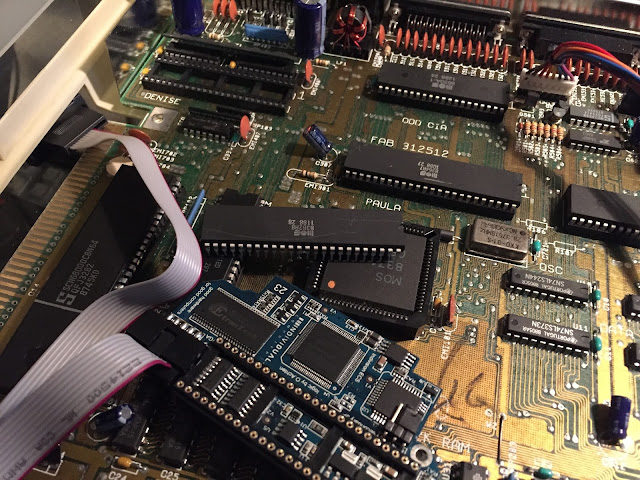 Here it is, all plugged into to the Denise socket: 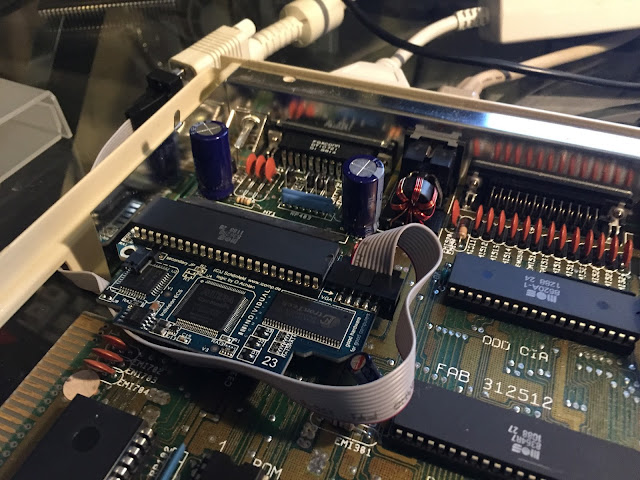 All connected up now, I then fed the VGA cable through the small gap in the left hand zorro slot expansion and powered on. It worked! Of course this looks so much better! 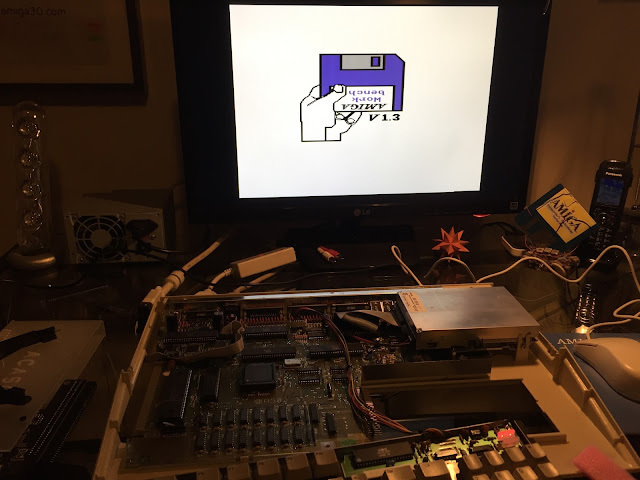 Next I reconnected the ACA500 which slotted in nicely and didn't get in the way of the vga cable running through the slot - the ACA500 booted up no problem: 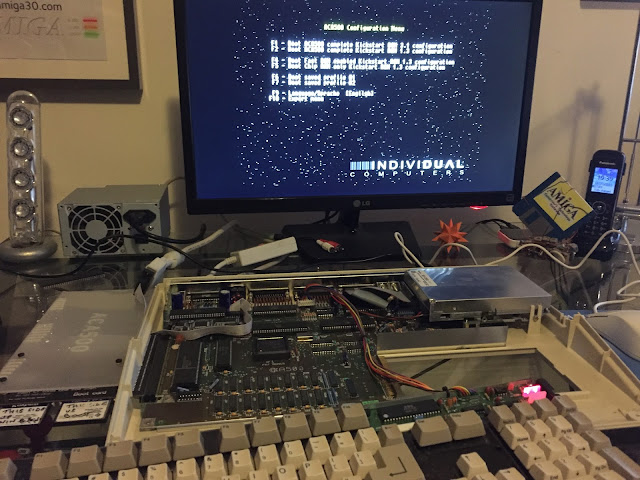 I then set about fixing the workbench overscan settings in preferences to line up the Indivision ECS display with my screen: 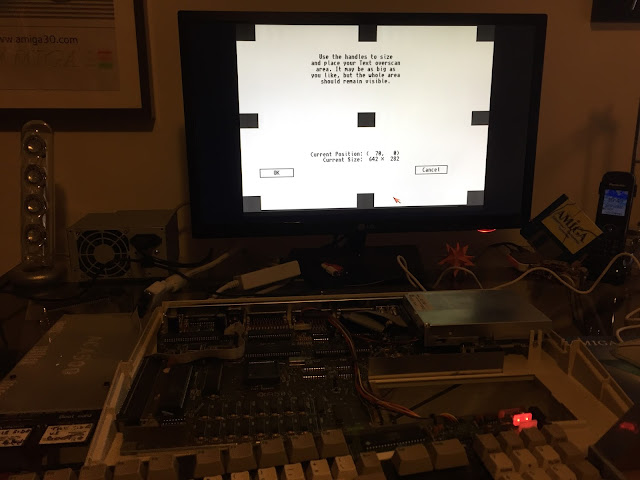 That done, here is the Workbench 3.1 with DOpus running in Workbench replacement mode: 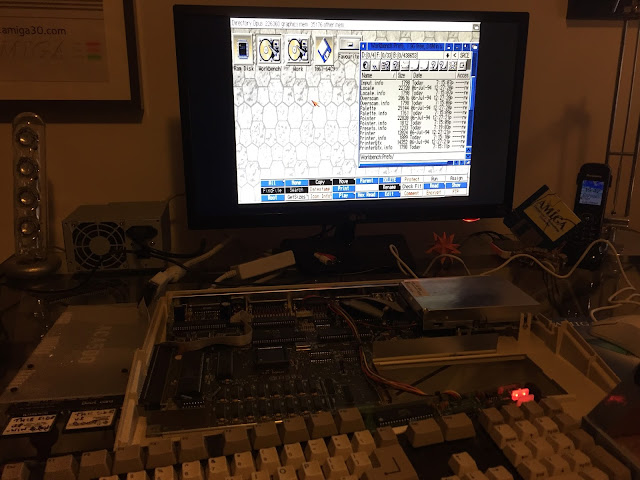 The lack of memory (only the 512k onboard since the ACA500 memory is used to soft kick the kickstart 3.1) makes things pretty unusable at the moment: 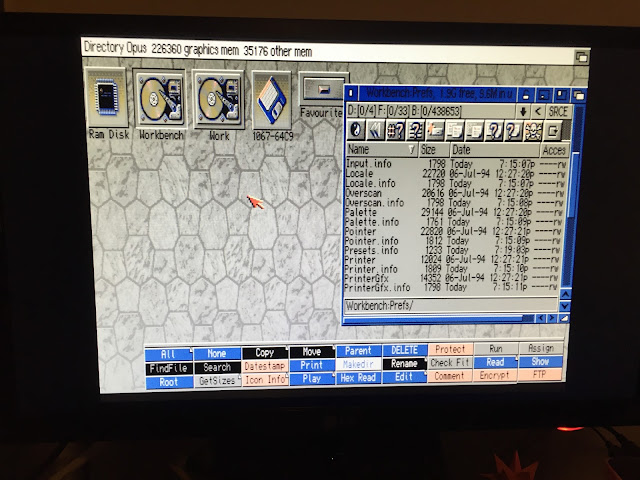 Next I sourced an Amiga 600 floppy drive to make sure the floppy can work correctly: 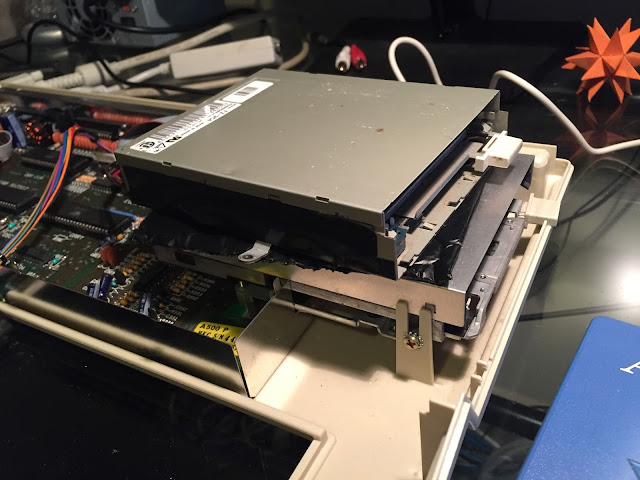 The A600 floppy drive worked perfectly on the Amiga 500, here booting the Workbench 1.3 disk: 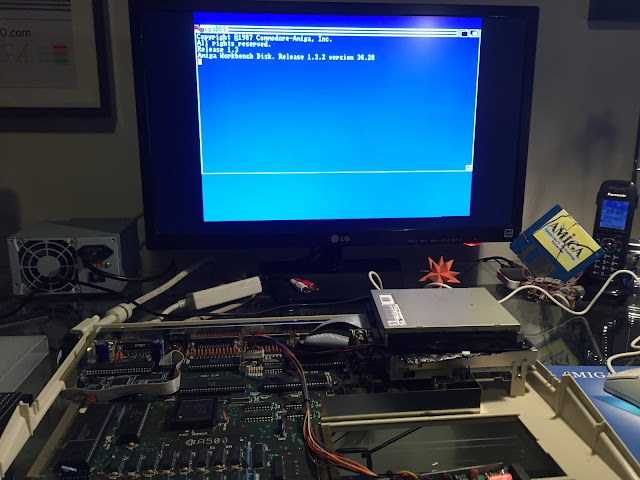 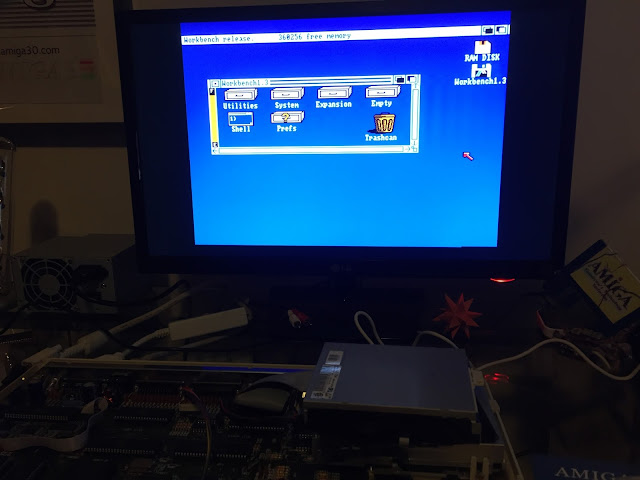 I also ran a Razor 1911 Voyage demo to test the sound, which was working perfectly also: 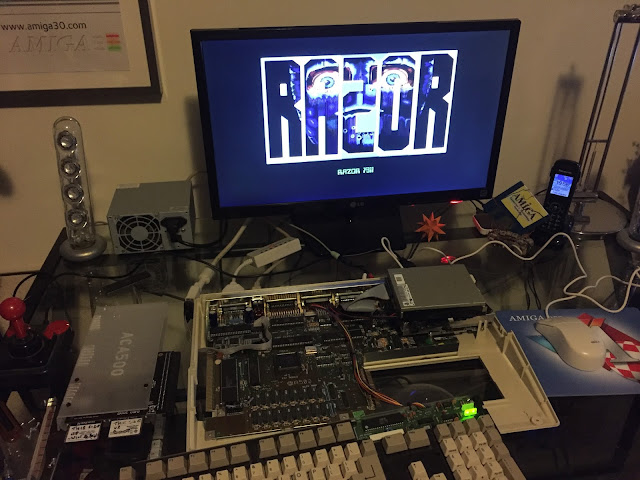 There is still plenty more to do, but this Amiga 500 is already starting to show plenty of promise. More to come in a future blog post!