When Amiga eyes are smiling!

Apologies for misquoting the lyrics to the famous Irish song but I started writing this blog in an airline lounge as I waiting for my flight to Auckland and onward to England via Los Angeles. For some strange reason I'm leaving the warmth of a Southern hemisphere New Zealand summer for the frozen winter in Europe. 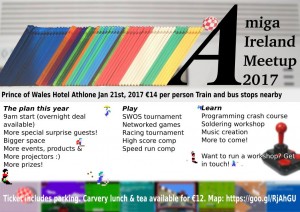 Actually it's not really that strange since this time I will be devoting most of my trip to Amiga related activities. Apart from a visit to Cardiff and Brussels I will be meeting up with Amiga friends in London before I travel to the emerald Isle to attend the Amiga Ireland Meetup 2017 in Athlone on Saturday 21st January. I haven't been to Ireland for a few years and am looking forward to catching up with fellow Amigans. So if you are in the area and fancy a good "craic" come along to the show and buy me a Guinness, Murphy's or even a local craft beer. I promise I will be wearing my designer Amiga gear.

No I don't mean Alice Cooper the godfather of "Shock Rock" but read on. With the news that Hyperion Entertainment had released Update 1 for AmigaOS4.1 Final Edition I decided to update the Classic version on my A.L.I.C.E. laptop. 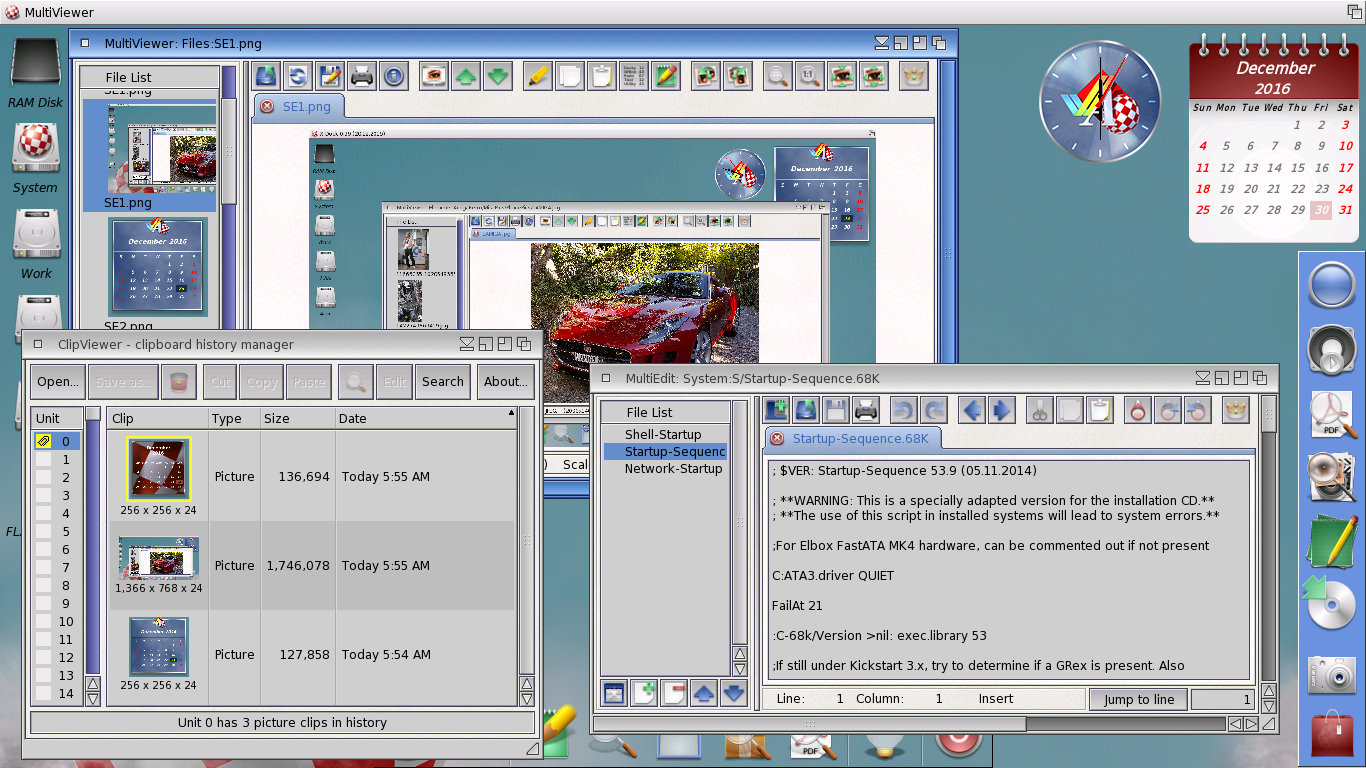 Back on topic - car enthusiasts will probably know the history of the Cooper Car Company which only began building racing cars in 1946 and in a few short years changed the face of Formula One and the Indianapolis 500. Their high performance Mini Cooper cars also dominated rally racing and today the legacy of the Cooper brand lives on in top end Mini Cooper models made by BMW in the UK. What has this got to do with A.L.I.C.E. you might ask? In an earlier blog I mentioned that I was going to install the new Enhancer Software SE on my A.L.I.C.E. laptop running the Classic version of AmigaOS 4.1 Final Edition under emulation. My x86 laptop can run "standalone" versions of AmiKit, AmigaOS 4.1 Classic and Windows. It also runs the latest version of WinUAE under Windows which opens up a whole new world for AmigaOS 4.1 Classic PowerPC emulation thanks to the excellent work of Toni Wilen. As a first test I decided to install the Enhancer Software SE v1.2 on AmigaOS4.1 Classic running under WinUAE/Windows. It was surprising easy and, although a little slow compared to installing on real PowerPC hardware, the installation proceeded without any errors. Of course the Classic version of AmigaOS 4.1 Final edition does not support many of the advanced features of PowerPC models like the AmigaOne X1000 or X5000. There is no compositing support or video support and the emulated version has limited RAM and graphics capabilities meaning games which requires compositing will be unplayable. However, despite these restrictions AmigaOS 4.1 is now quite usable on my A.L.I.C.E. laptop. I was pleasantly surprised that all of the Enhancer Software components I tried appeared to work out of the box. It was encouraging to see that the Enhancer utilities, MultiViewer, MultiEdit and Clipviewer seemed to mutltitask and interact seamlessly. What's more, AMIStore also works well and, in addition to the Enhancer Software SE pack, I was able to download all of the other Amiga software I had previously purchased. I used AMIStore to install SketchBlock, Personal Paint NG, Ranger and ZTools. I had some issues with the ZTools package but I was able to install the excellent SysMon utility. The Odyssey web-browser also runs now, although it is slow on more complicated websites and it is not possible to play YouTube videos.

As a further test I continued writing this blog with Odyssey. It was a little tricky because the Airport Wi-Fi was quite slow and some of the WordPress features don't quite work correctly under Odyssey but it was usable nevertheless. I know some Amigans think that running AmigaOS 4.1 on a PC laptop is akin to shock rocker Alice Cooper but for me the ability to get my OS4 fix while I'm travelling away from my AmigaOne X5000 is really cool. There were a few glitches which will no doubt be ironed out in later revisions but, given this is an x86 machine emulating a relatively slow PowerPC equipped Classic Amiga under WinUAE, it's certainly more usable than the earlier implementation. So rather than the aged shock rocker, AmigaOS 4.1 Final Edition Update 1 Classic running under WinUAE combined with the Enhancer Software SE v1.2 has converted my A.L.I.C.E. laptop into A.L.I.C.E. Cooper. As for Enhancer Software pack, a little bird told me that v1.3 is already in the works.

Anyone who reads my blogs will know I'm not a great fan of software benchmarks and prefer real world usage to determine system performance rather than synthetic tests that churn out arbitrary unintelligible numbers. Having said that, Alain Thellier has released a new version of his Cow3D benchmarking and testing tool for 3D on the Amiga which seems to be causing quite a stir on the Amiga forums so I thought I'd better check it out myself. The new version includes the Shader source code and now supports Warp3D Nova as well as the older Warp3D and Warz3D software renderer. 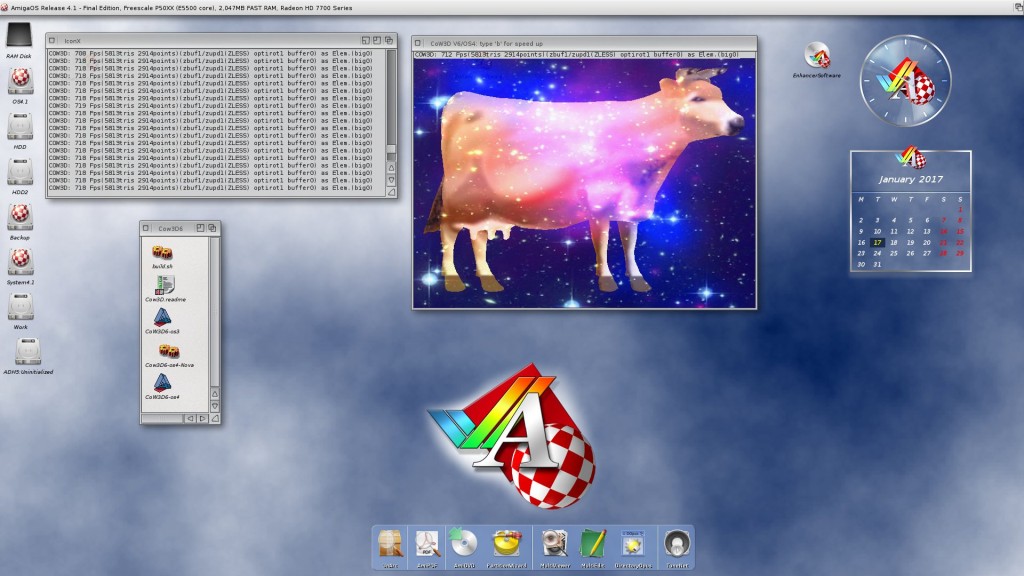 So I decided to compare the Cow3D results for Warp3D Nova and Warp3D-SI on an AmigaOne X5000 with a RadeonHD 7750 graphics card installed. Under the test, which features a rotating 3D cow, Warp3D Nova delivered ~718 fps compared to ~300 fps for the Warp3D-SI driver, representing a speed increase of 240%. Looks impressive. Of course spinning 3D cows are one thing but the real benefit will come when playing 3D games which are specifically designed to take advantage of Warp3D Nova's advanced graphics features.

The Warp3D Nova project is part of a continuous structured development program to create modern 3D graphics for the AmigaOS. The latest update v1.34 was released with the Enhancer Software pack V1.2.

That's all for now, next stop Brussels then on to Athlone in Ireland for Amiga Ireland Meetup 2017. Hope to see some of you there.

.........Oh and it seems I left NZ at the right time as Wellington is being hit by a weather "bomb" bringing severe gales and heavy rain. It never rains but it pours!