This week saw the release of the latest version of Hollywood 7 for AmigaOS 4! I quick bought it to give it a go on my X1000. 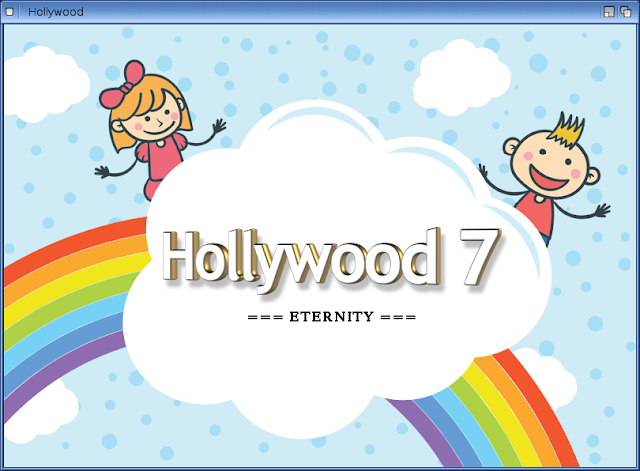 Last time I looked at Hollywood was back here, a few years ago!

Hollywood is a commercial programming/scripting language which allows programs to be developed cross platform that can be compiled to run under AmigaOS 3, AmigaOS 4, MorphOS, AROS, Windows, Mac OS X, Linux, and even Apple iOS and Google Android devices! 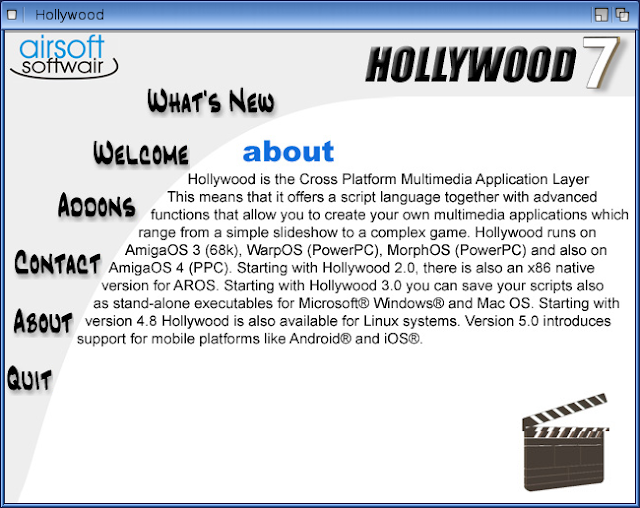 This program keeps getting better and better with more and more features added with each new release. The AMIStore client for AmigaOS 4 is an example of a Hollywood produced program, and of course Hollywood is capable of many other types of projects too.

As I already owned Hollywood 6.1, I qualified to purchase the cheaper upgrade option, and soon after  my purchase I received my keyfile and downloaded the installers for all the platforms I wanted to try it on, including Windows, MacOS X and linux.

Having said that, you don't actually need to do that, as you can compile the executables directly from AmigaOS 4 and just run them direct on the target system. So we can work entirely within AmigaOS while developing AmigaOS, Windows, Mac OS X and linux programs :-)

Speaking of which I should get it installed on my X1000. The install instructions are pretty straight forward. No need in this version to construct an iso to install from, which is great! 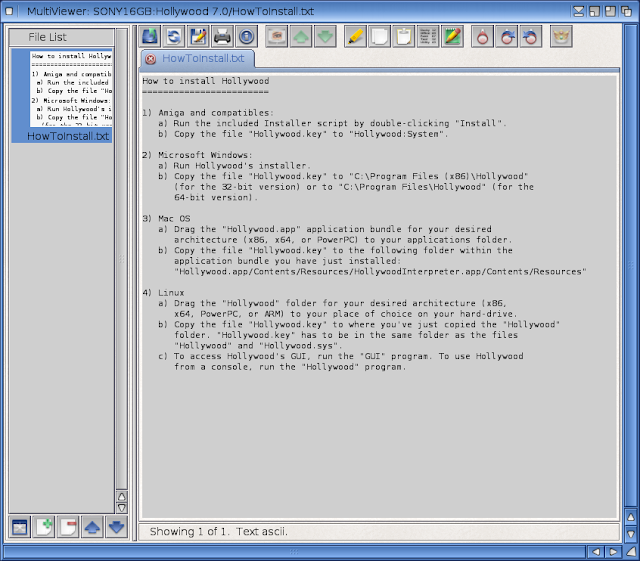 The installation process is very straightforward: 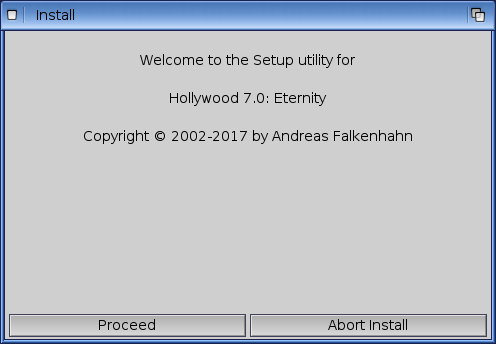 The installer picked up my Hollywood 6.1 installation to update: 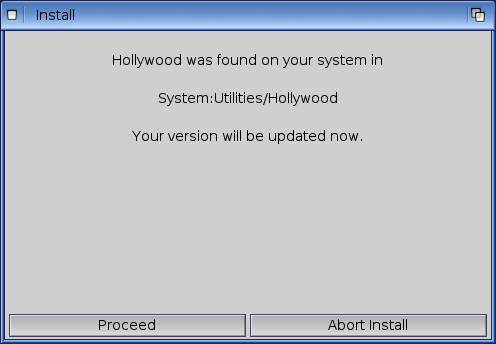 As you can see, Hollywood can run on the NG and Classic Amiga platforms: 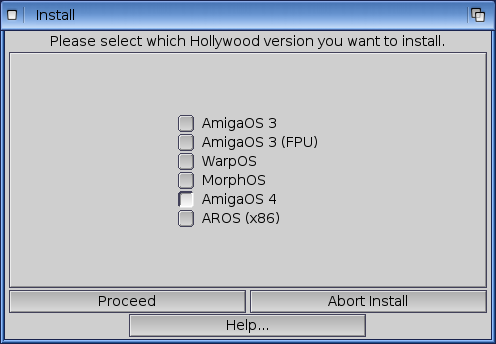 The new version introduces unicode character support, which is a great step forward. It mentions in the installer how to make older Hollywood programs deal with it if they are not unicode compliant: 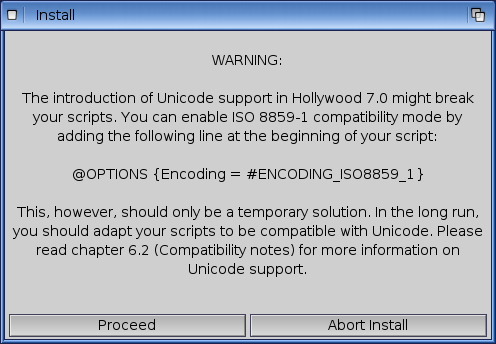 You can use Hollywood from the command line or GUI to run scripts. I prefer to use Cubic IDE editor with the add-on Hollywood IDE support, but more on that soon. 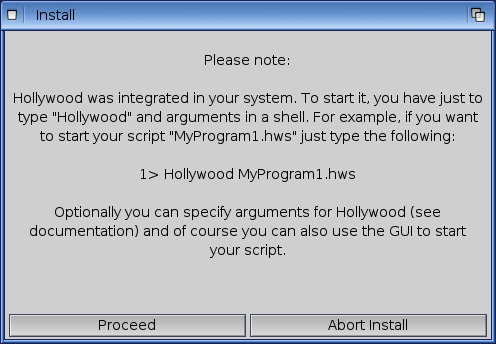 Something to remember when you have Hollywood programs that are not behaving themselves without a close gadget or running fullscreen is the CTRL-C command to quit them: 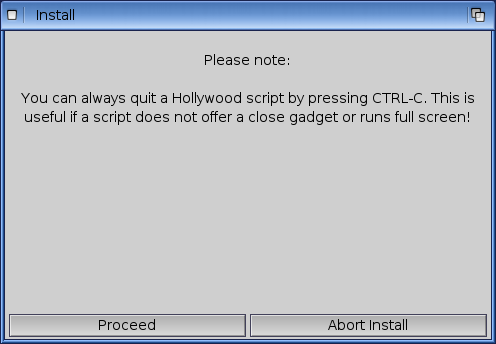 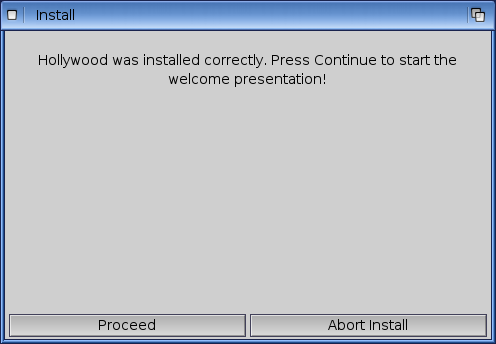 At the conclusion of the installation you get a nice Hollywood program that explains the new features of Hollywood V7, as below: 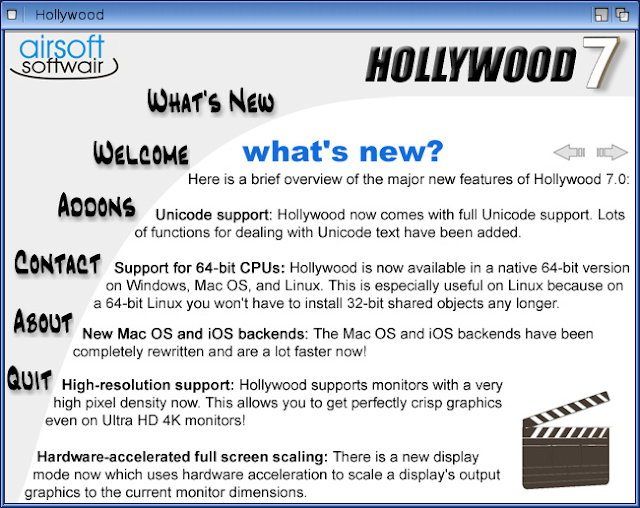 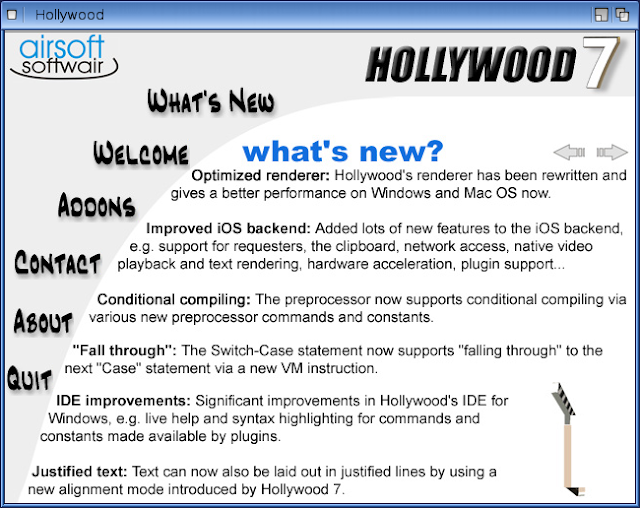 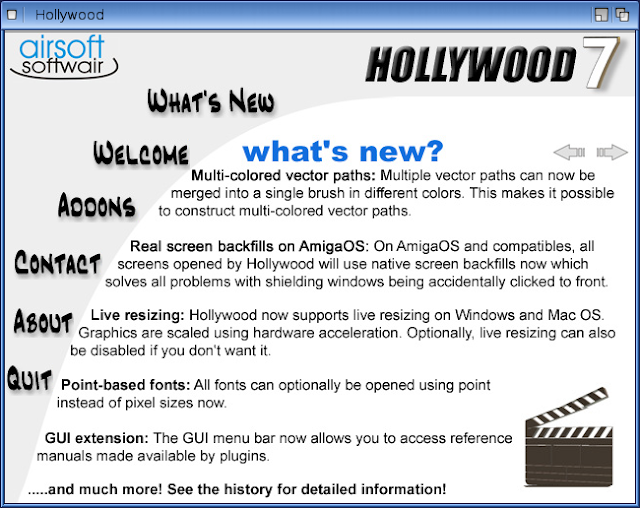 I then ran the Hollywood GUI program, which allows you to see example scripts, including running them and viewing the source code, etc: 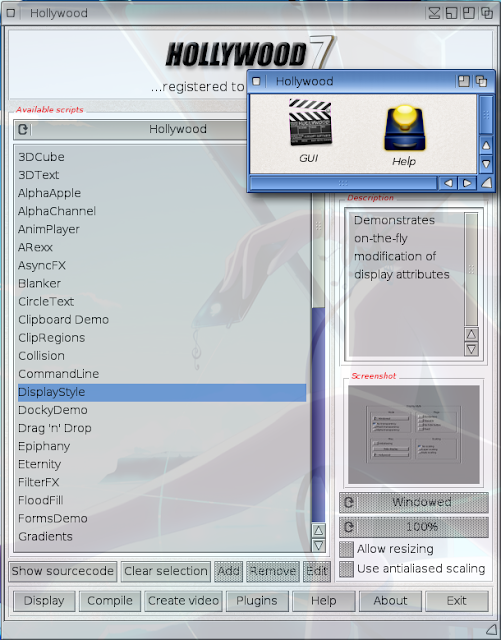 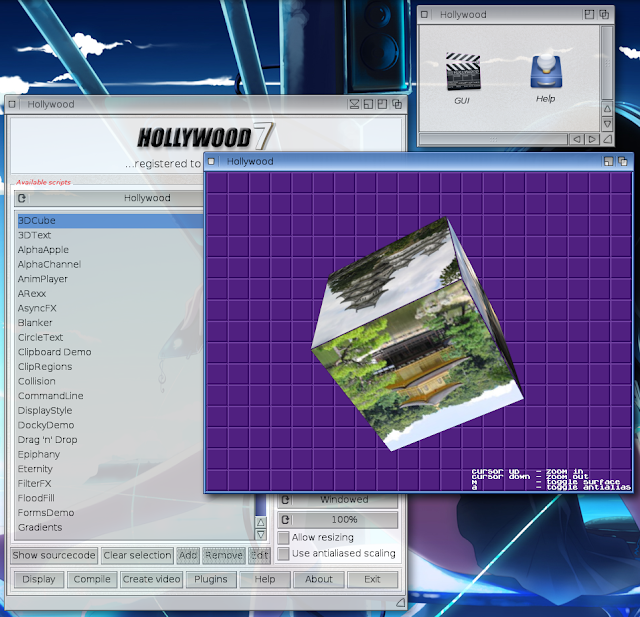 Included with Hollywood is a comprehensive AmigaGuide document for Hollywood features and functions: 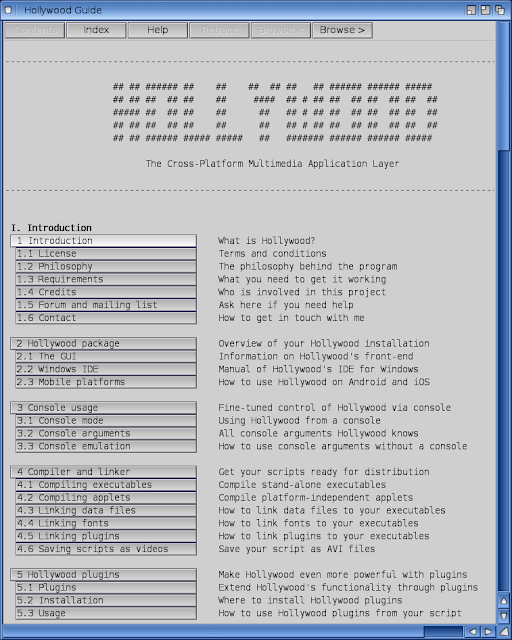 The Hollywood scripting language constructs and commands are also covered in detail, making this an essential go-to guide as you learn how to use Hollywood. 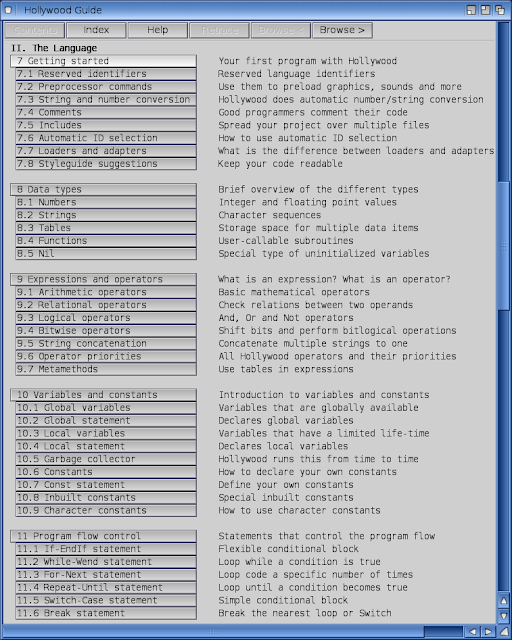 From my previous installation of Hollywood 6.1 in 2016, I also installed all the separate add-ons on the Hollywood website that enable support for all sorts of programs and project types, datatypes to playback music/videos, MUI integration, and more too!

These add-ons have not been updated (as I write this) from the older version in 2016, so I don't have any add-on installations to show here.

One thing I did update though is the Hollywood for Cubic IDE add-on, also downloadable from the Hollywood website. This enables full Hollywood compilation, source code highlighting and more. 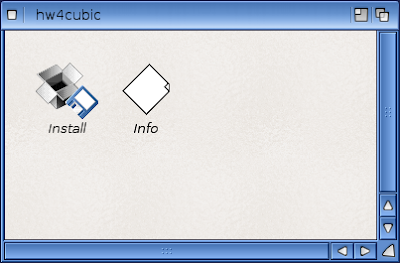 The installer reminds you that you will be prompted to overwrite older files (as in my case): 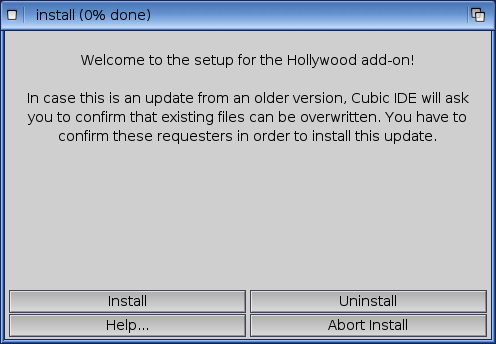 Once installed, the Hollywood functionality add-ons are now available in Cubic IDE, my preferred editor environment in AmigaOS 4. (and indeed Classic Amiga as well): 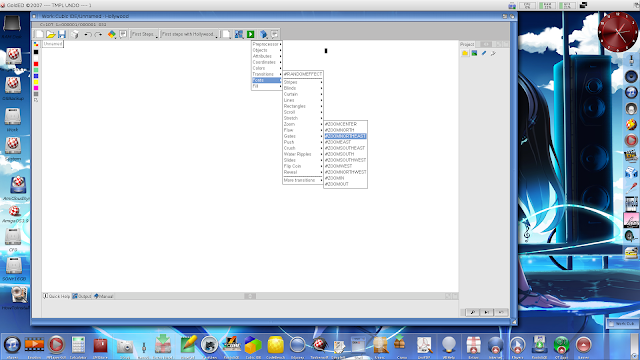 I loaded up a program I have been working on from time to time - a little tribute to my old demo group The Experience - but not updated for a while now! 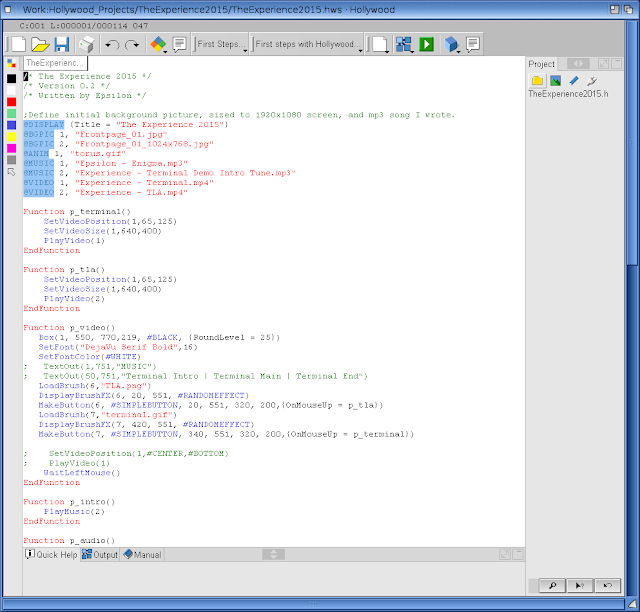 I then recompiled it under v7 and it compiled it from AmigaOS 4 with no problems! 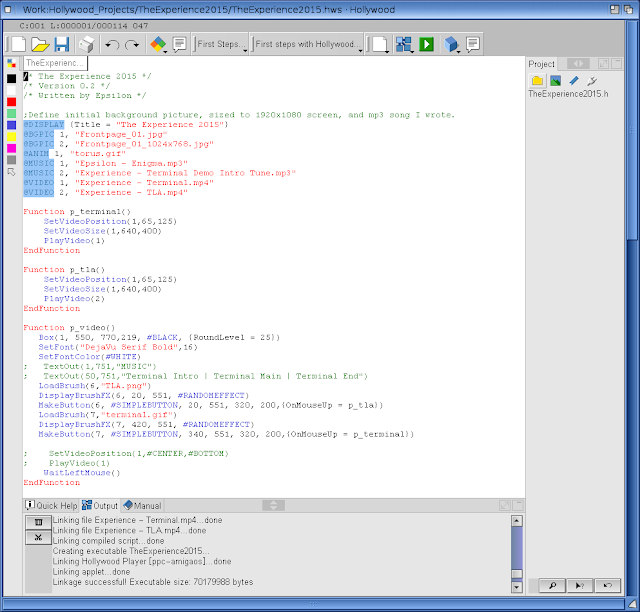 I realise it is not the best looking or the most exciting thing, but from little things big things grow right? 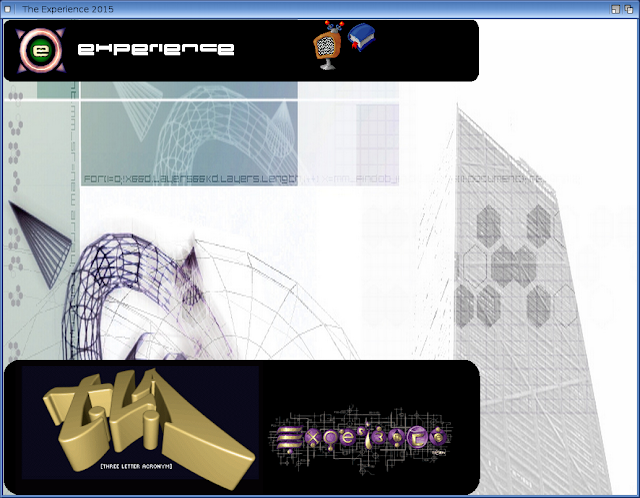 In this case I have a program that allows me to select from the two Amiga demos that I helped write back in the late 1990's on AGA Amiga 1200/030 systems, for playback as mp4 video files: 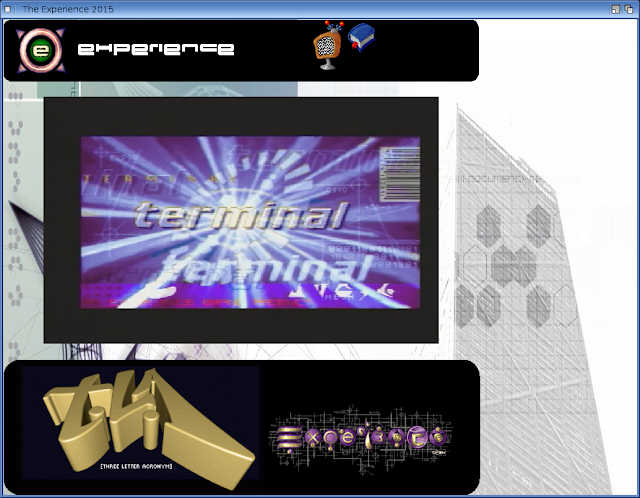 I am pleased to see a bug that prevented colour playback of the videos has been fixed now, so it has given me more motivation to try expanding the functionality of this program further.

I can also playback the mods I wrote for the two demos from the program as well, although I haven't worked out how to stop them yet! Still have a lot more to learn! :-)

Hollywood 7 is a great product and well worth trying out, especially if like me you are a novice at programming.