This weekend I took a look at the Amiga 500 and Amiga 600 memory expansion cards and A1200 real time clock port expansion module, all kindly supplied to me for review by AmigaKit. 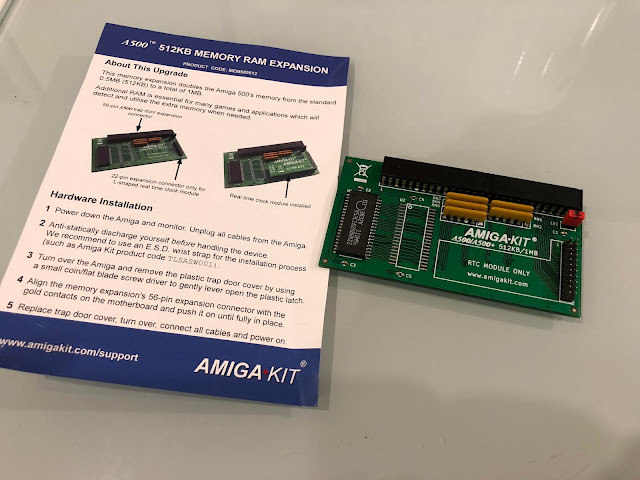 Starting with the Amiga 500 memory expansion first, it is an auto-configured 512k memory expansion, which is much smaller than old Commodore A501 expansion cards from back in the day! It costs GBP17.80 and is available from here. 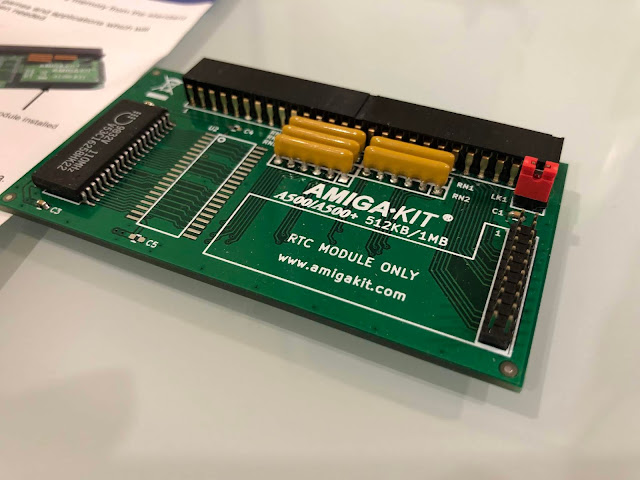 If you have an Amiga 500+ model, you can use this card to give you the full 1MB chip memory (rather than fast memory in the A500). There is a jumper on the card you can open to enable this functionality. If you have an Agnus 8372 chip installed on your older A500 this should also work but I have not tested this.

Here is the expansion port side view: 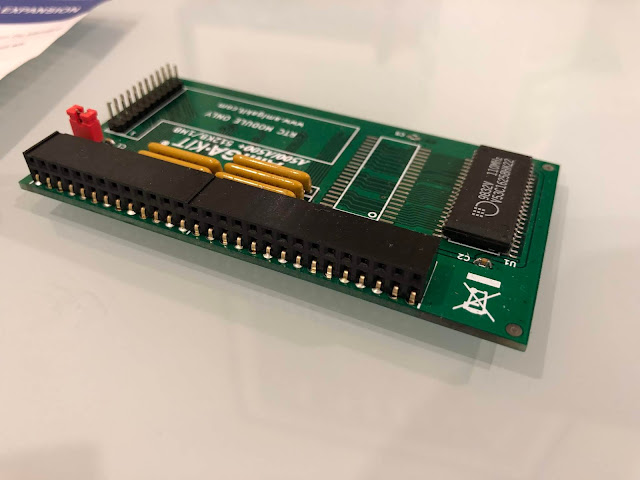 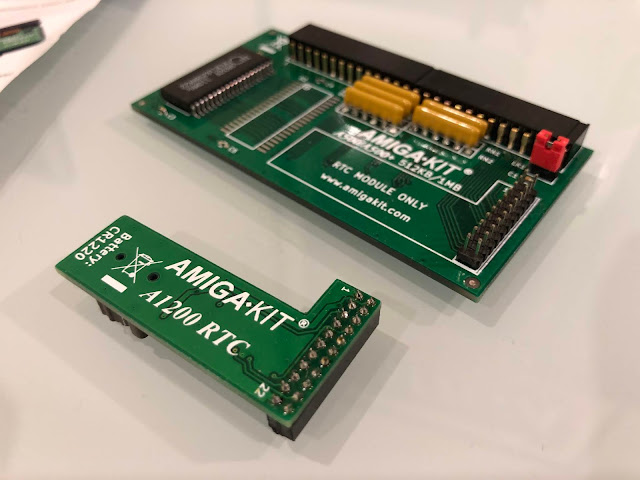 It is designed to fit on the clock port expansion port on the Amiga 1200, but also can be used on the Amiga 500 and Amiga 600 memory expansion featured here, to enable saving date/time on your Amiga.

According to AmigaKit the clock port expansion is usable for a number of accelerators, not just their own - it works on:

Below is another view showing the CR1220 battery slot and battery on the RTC card: 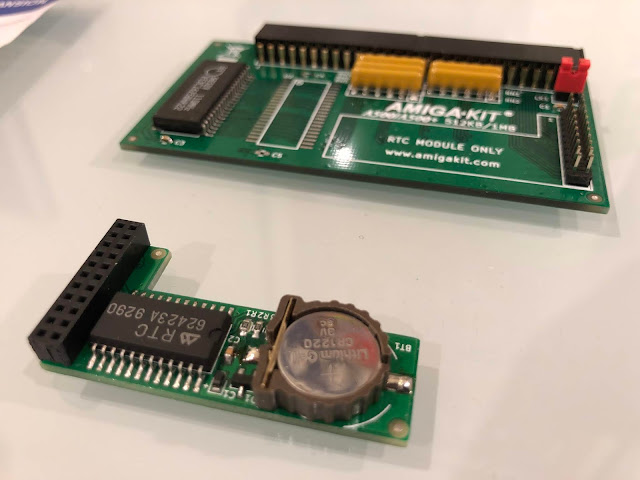 Here it is installed on the Amiga 500 memory expansion: 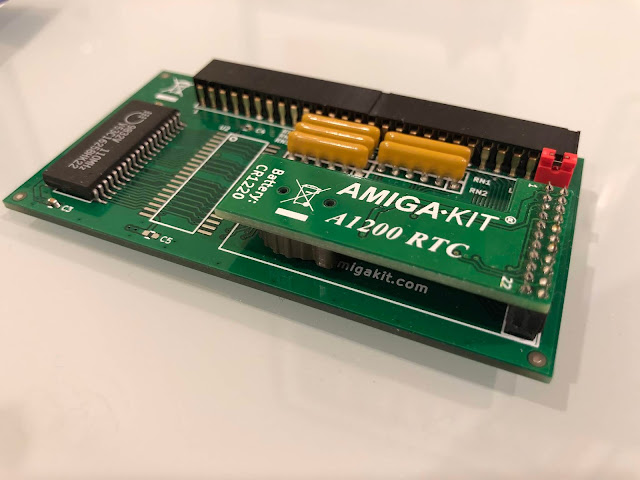 The ability to switch the RTC between your systems is quite handy, especially if you don't need it on all your Amigas. Install time on the Amiga 500: 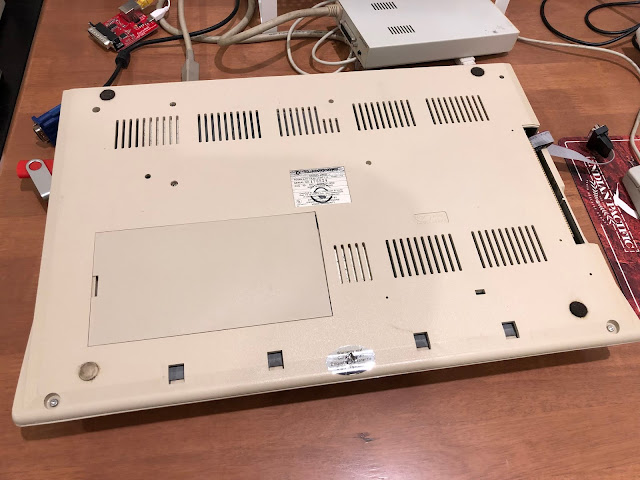 Seriously, this expansion card is very small once installed in the Amiga 500 - it slides in smoothly, using the plastic edges of the expansion bay to ensure it connects exactly: 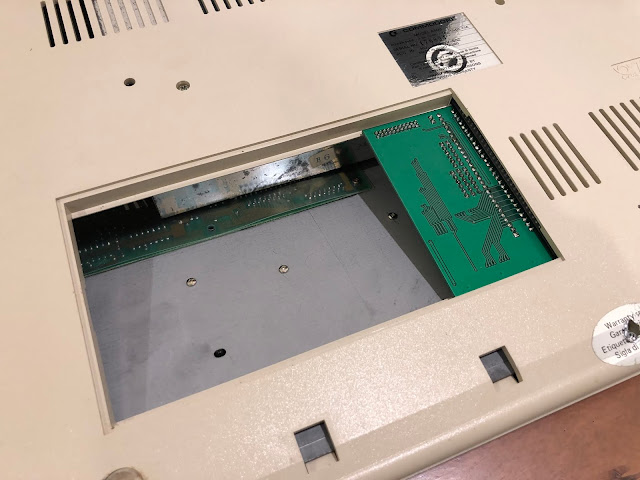 Flipping back the A500 to it's rightful position, it boots and shows the extra 512k memory: 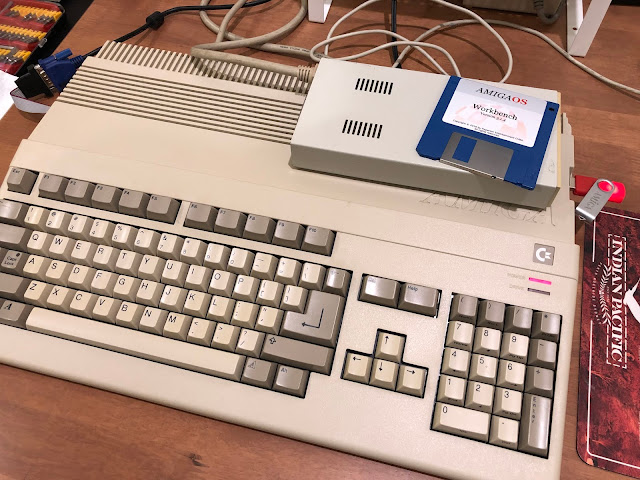 Next I moved onto the Amiga 600 1MB auto-configure memory expansion, which costs GBP19.99 and is available from here: 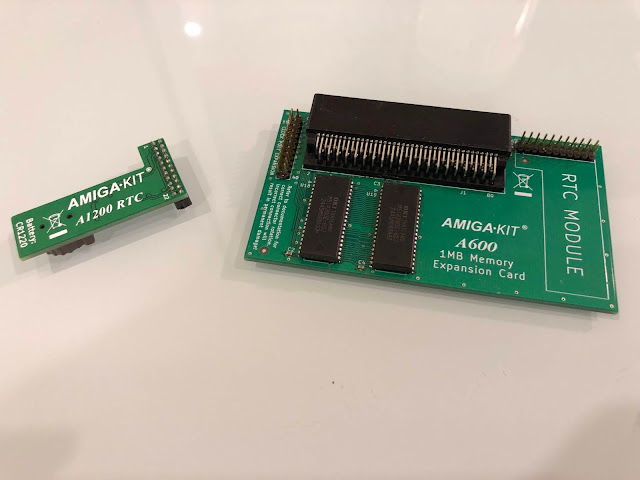 This card is a little more interesting - it has 1MB memory expansion for the Amiga 600, bringing it's total Chip memory to 2MB. It also has the RTC port for the Real time clock expansion card. In addition it includes a clock port for A1200 clock port expansions like subway USB, rapid road, etc. 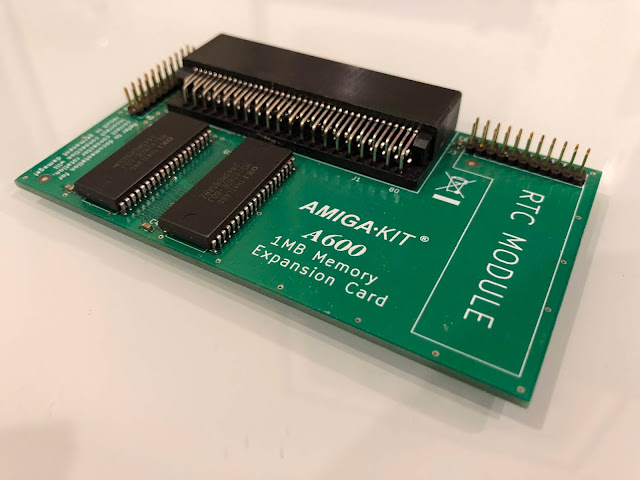 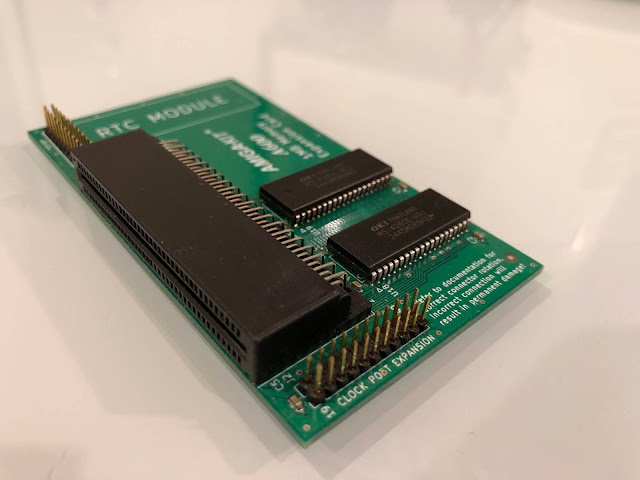 I installed the RTC card on the A600 expansion: 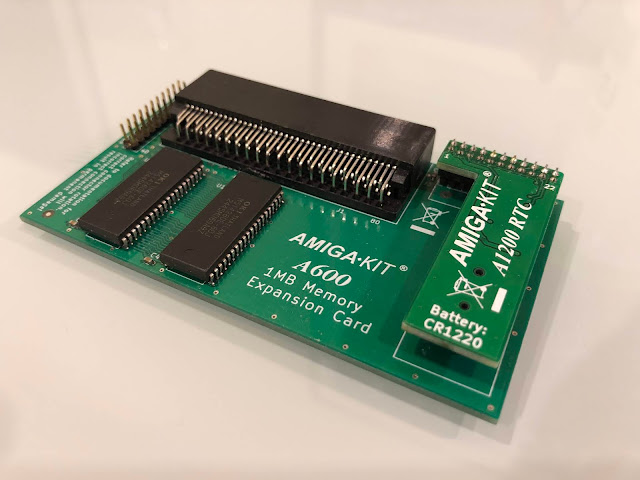 Next I opened up my A600 to install the expansion card. I realise that technically you can just open the expansion port to do this, but I wanted to photograph the expansion inside the system: 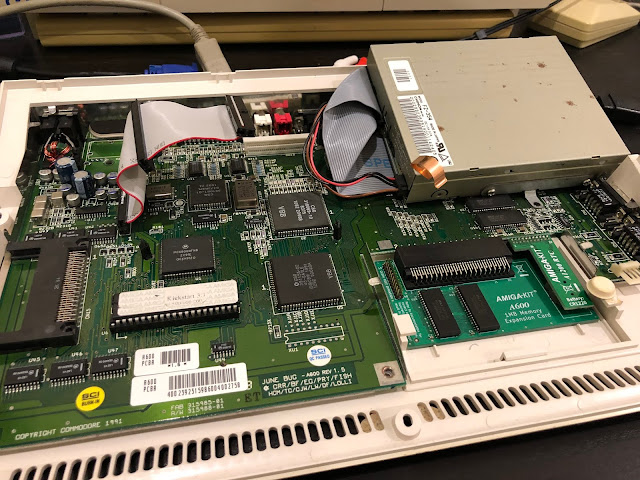 Installed in the A600 and ready to close up: 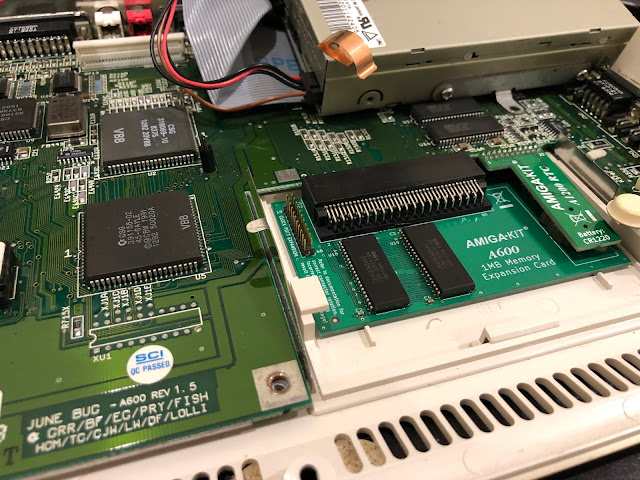 There is some useful instructions included with the expansion cards which you should check over prior to installation since they explain about the clock port usage among other things - there is an online Wiki for these boards too: 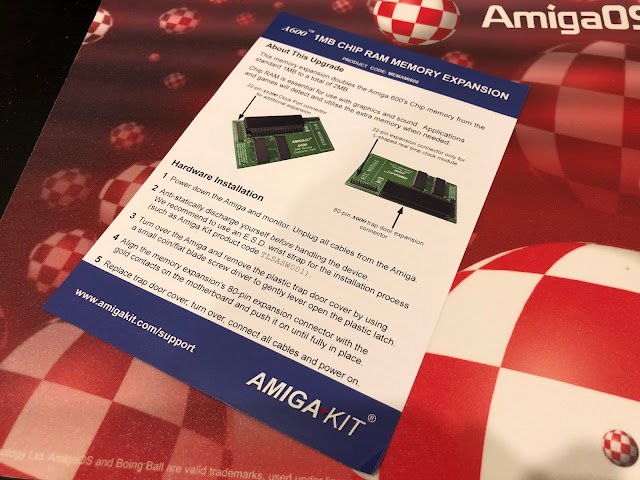 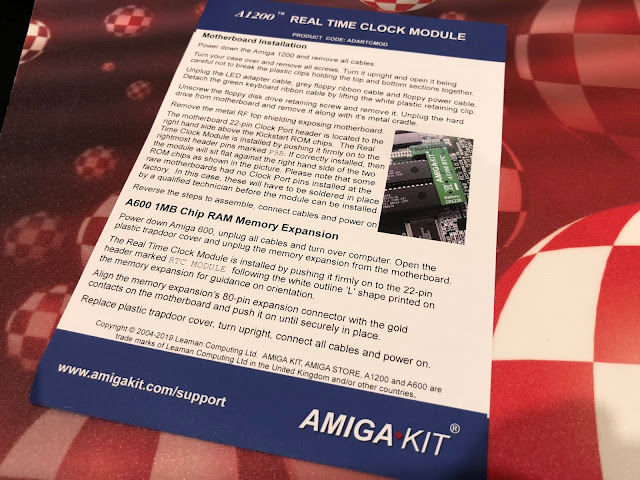 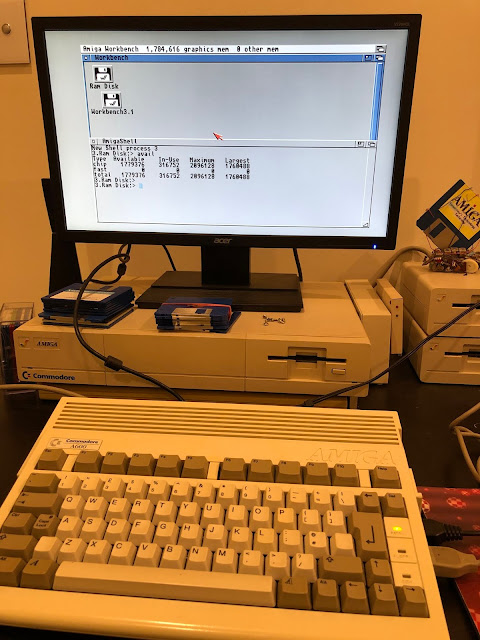 The memory expansion gives the A600 enough memory now to run the newest AmigaOS 3.1.4: 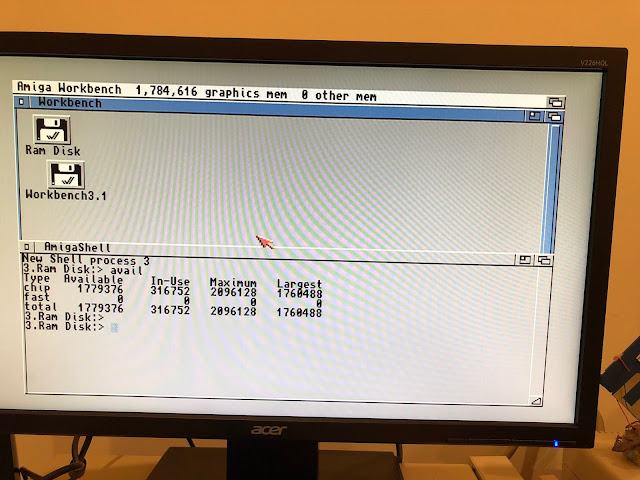 Last, but not least, I decided not to run the A1200 RTC card in either expansion card. I decided to put it in my Amiga 1200, which I really do want to have a battery backed up clock for, given it is using my AmiKitReal 9 build now.

I opened up the A1200 to install the RTC card in the clock port: 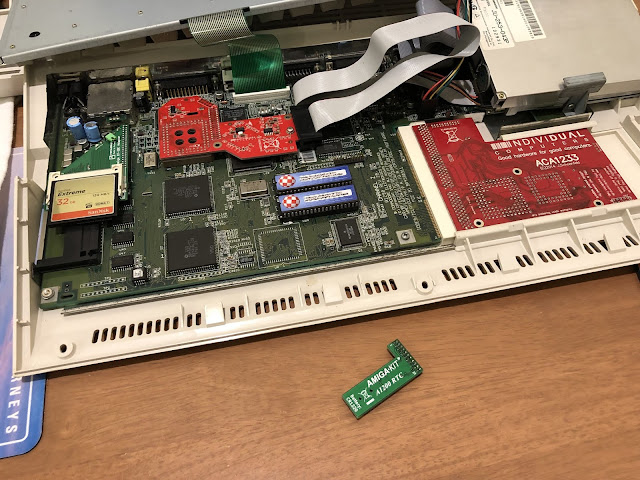 Here it is, installed, fits very nicely around the Kickstart roms: 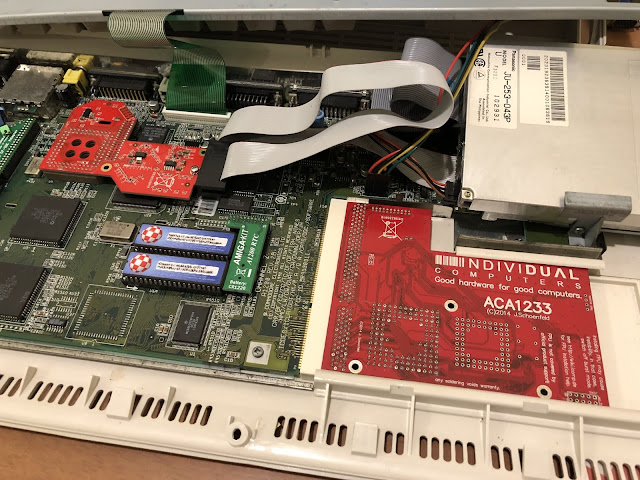 Close up view of the RTC card installed: 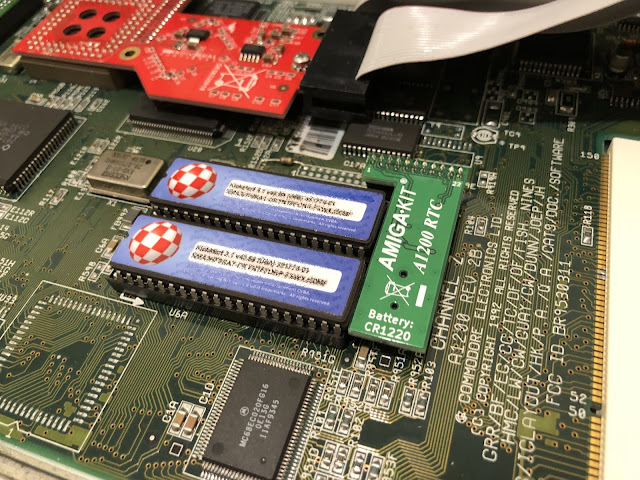 I suppose thinking about it I could have installed it on my Individual computers A1233 accelerator too, but I elected to do it this way. I guess I just like any excuse to open the case!

It is great to have these new cards in 2019 to use on my Classic Amigas. They appear to be well made and are available from AmigaKit for purchase.