When I was working for a global company in the mid 2000's, I travelled a lot across the Asia Pacific region (APAC) and also globally as the APAC IT Manager. I was rarely at home - maybe 2 months in a year for 4-5 years. 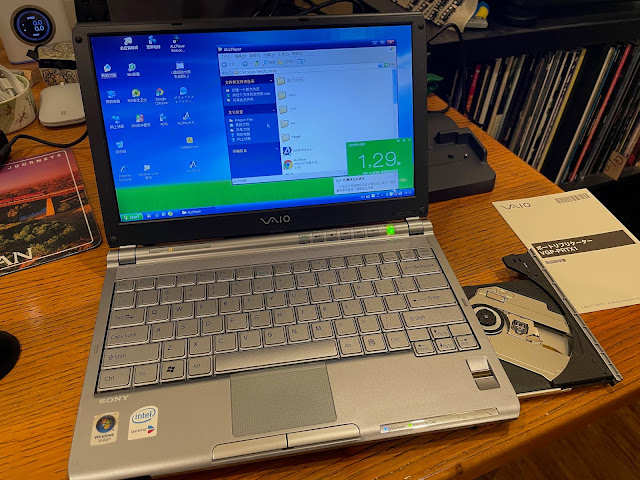 As a result I wanted a lightweight laptop that worked for me as a very frequent traveller.
When I first went to Japan I had this horribly heavy HP laptop as below on the left. On my desk in Tokyo, I also had this cardboard boxed PC a Japanese IT work colleague made as a joke! The motherboard didn't fit in it after all that work they did to build a cardboard cutout PC case so it kinda backfired...the system worked though! 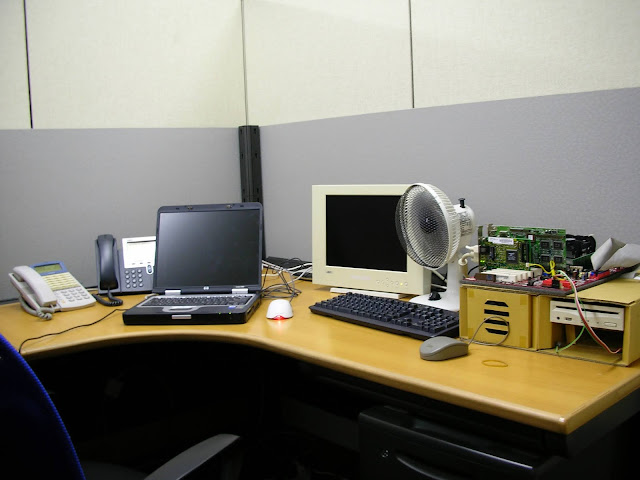 At that time most laptops were quite heavy. Sony though, released the rather small and compact Vaio TX series, which I first saw in Japan and Korea in 2005. The one below was in Korea, running Korean Windows XP with the Korean keyboard: 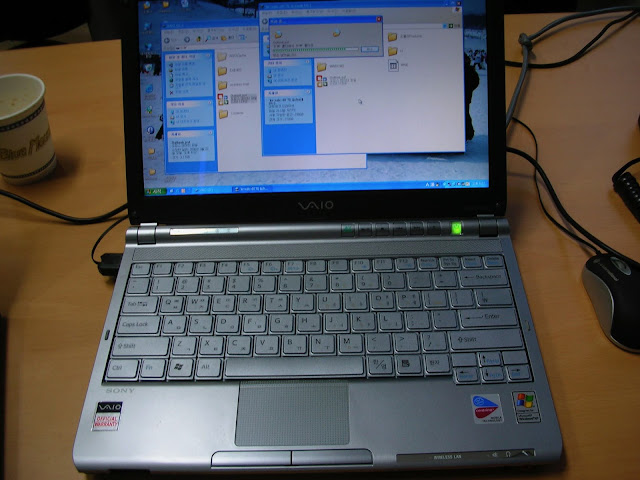 I loved the laptop size, and it was perfect for what I needed for work at that time. I bought and took a TX17 model Vaio all over the world many times over for business use!
As a gamer at heart, I loved Starcraft at the time, had it on my laptop for downtime in the evenings in hotel rooms, and when I was in South Korea (Seoul) in 2005 I was lucky enough to be able to watch a live televised Starcraft multiplayer competition tournament held in the COEX mall under the hotel I was staying in - they love Starcraft in Korea: 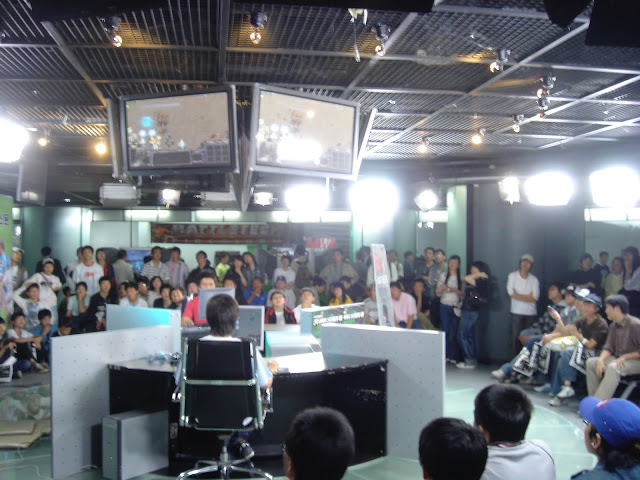 Yep, even in downtime I am still a geek at heart :-)
I also bought the Japan-only released Sony Vaio U50 palmtop computer while I was working in Japan on a project in 2005. 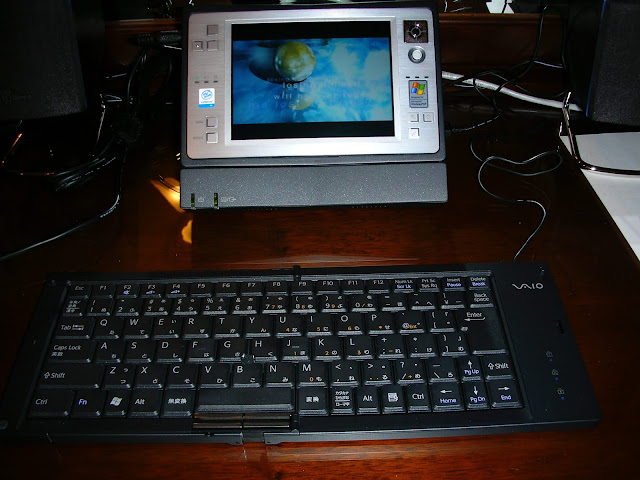 It was an amazing piece of kit for the time, with onscreen keyboard, stylus, built in mouse pointer and very compact dock and external foldable USB keyboard (as shown above), but it was quite underpowered with small memory and hard disk.

I kept it for quite a few years, but ultimately got rid of it when selling a bunch of stuff to buy the Amiga 4000T. They made a even cooler UX50 later on, but I never bought it as it was also underpowered.
I know Sony subsequently released the very cool Vaio P Series, which was even smaller (no DVD drive), with an even smaller screen and built in webcam. These are still a bit too expensive though in the second hand market.
Come 2021 though, and I thought it would be nice to have a TX17 or similar TX model again. Call it nostalgia I guess! I researched and determined that these are not considered "Retro" yet, just old enough to be very low in value, which is the perfect time to get one!
This laptop I bought below though, is not that TX17 laptop. I never got to keep that laptop as it was a company asset. Sad that! 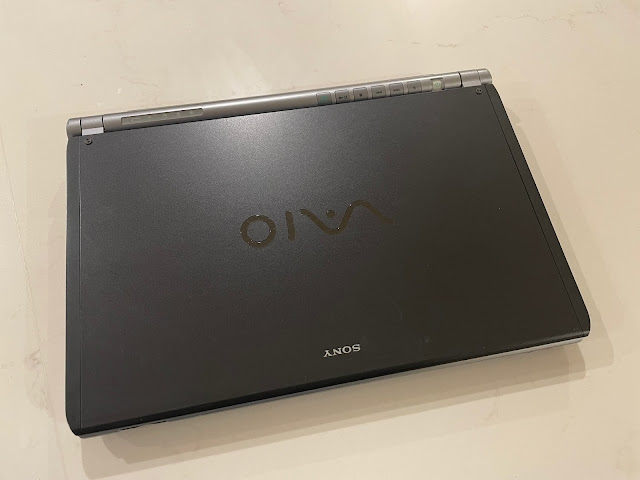 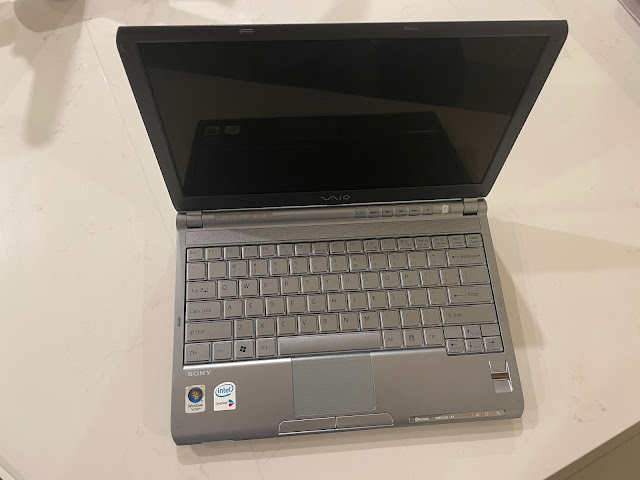 I got this one from Japan and it is in very good condition. It is a 2005 era Sony Vaio TX56, which actually originally came from China, rather than Japan. So this laptop runs Windows XP in Chinese and has a standard English keyboard rather than a Japanese one. 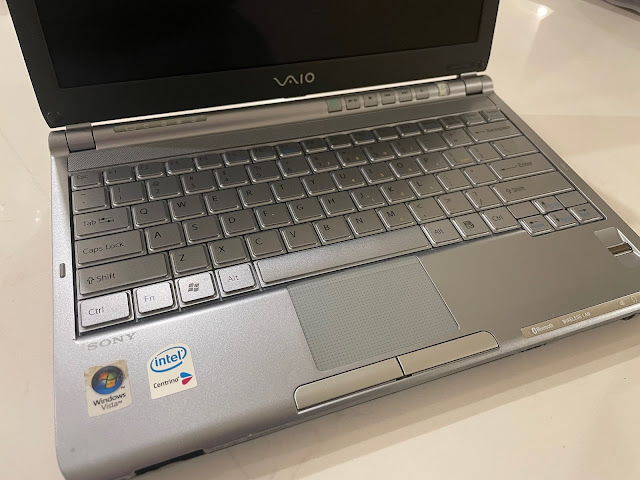 Actually, it appears clear this machine originally came bundled with Windows Vista and the previous owner decided to downgrade to Windows XP, which was very common at the time, as Vista was very slow and buggy. 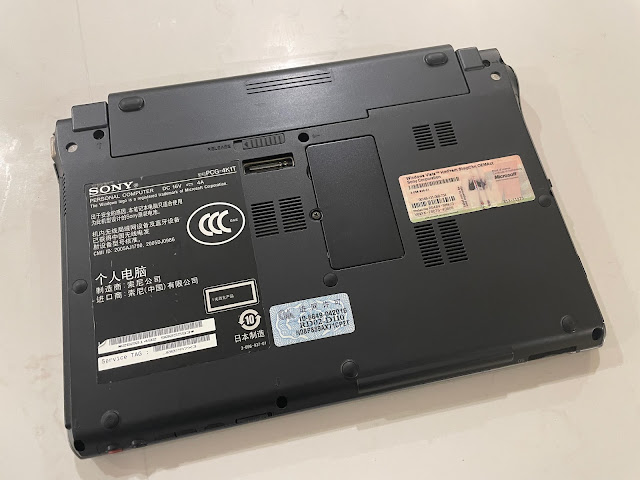 The network port and one usb port is hidden behind a sturdy pull out cover. This means they are covered when not needed, which was often, since the wireless networking worked great. 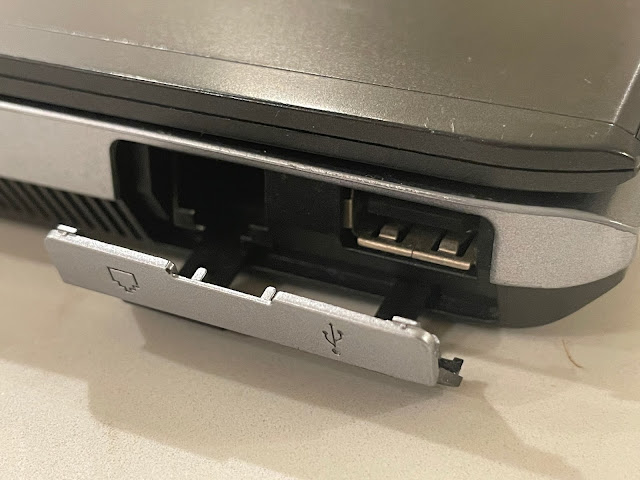 Sony at that time loved having custom buttons on their computers, and this Vaio is no different, with a AV Mode button and music/video control buttons above the keyboard (rather than functions tied to the function keys as is more common). 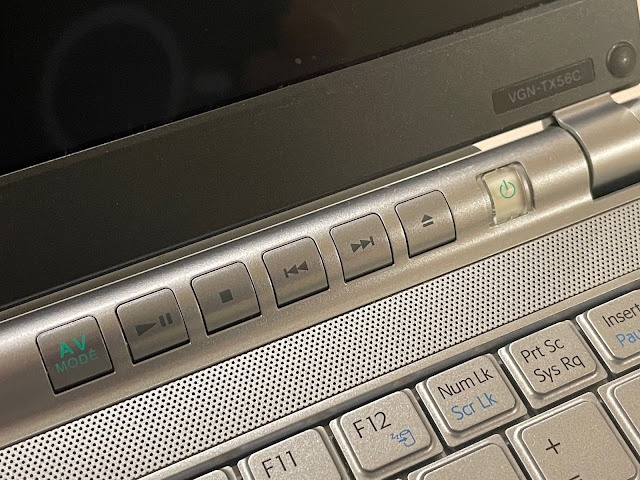 Battery, HD, caps lock and other indicators are on the left side of those buttons: 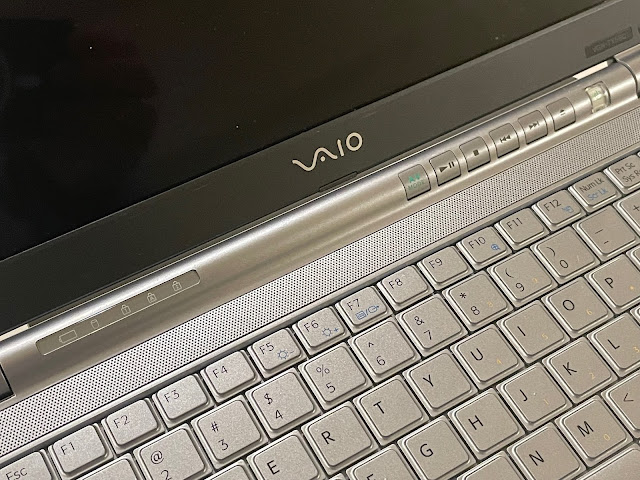 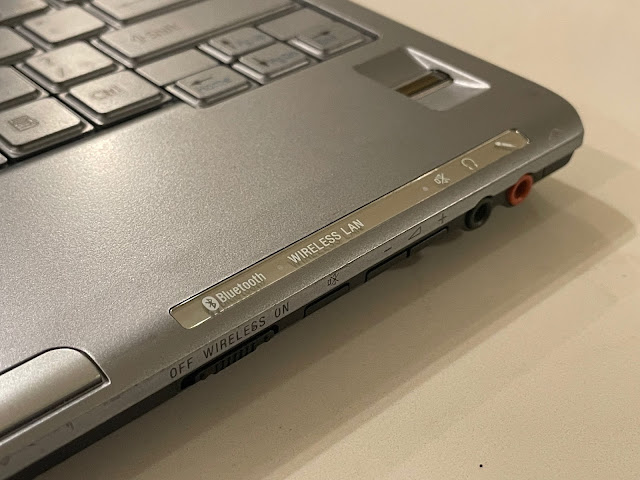 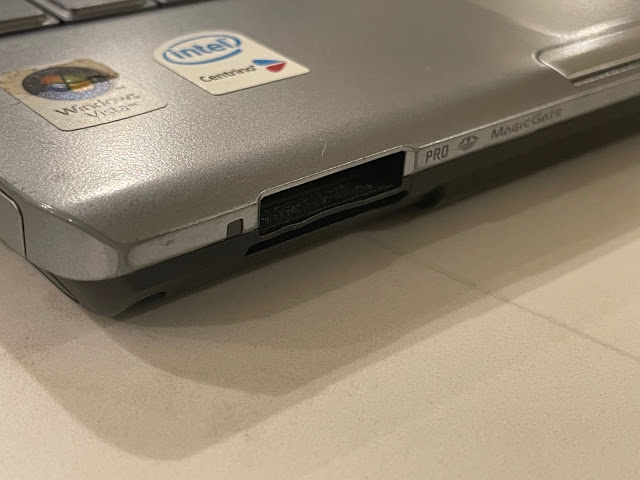 I also picked up a brand new in box Port replicator/docking station for the Vaio TX56 to sit on. This also came from Japan. I never had one back in the day as I was travelling to too many countries to make it worthwhile to have one. But I could hardly say no to a $50 brand new one! :-) 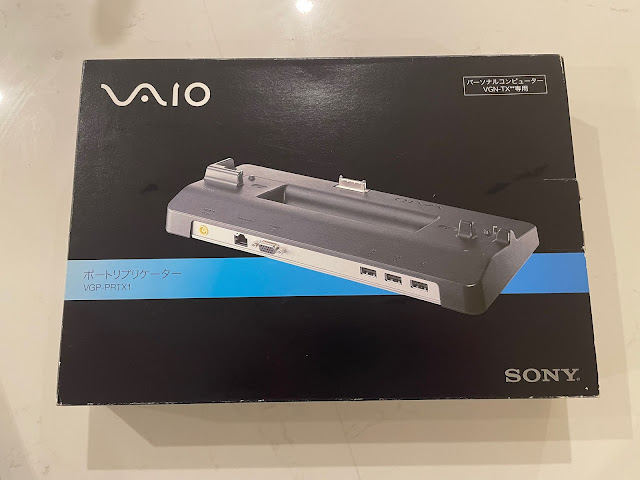 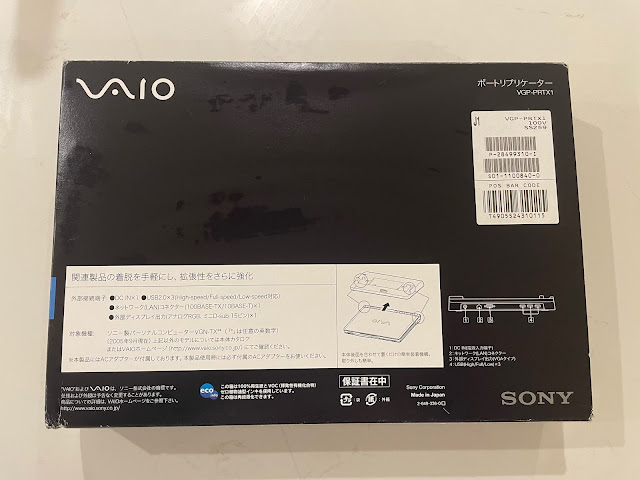 Here is a few close ups of the docking station: 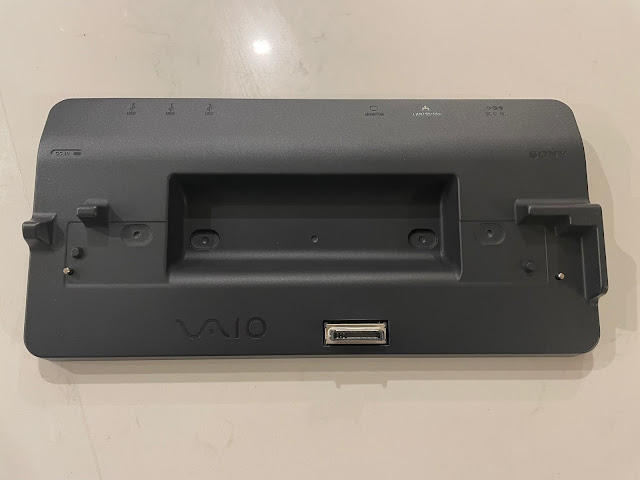 By docking station standards of the day, this one is pretty basic, missing a lot of common ports for the era like firewire, parallel, serial ports. Plenty of room for them, but I know Sony didn't generally include a lot of "legacy" port support in the Vaio laptops. 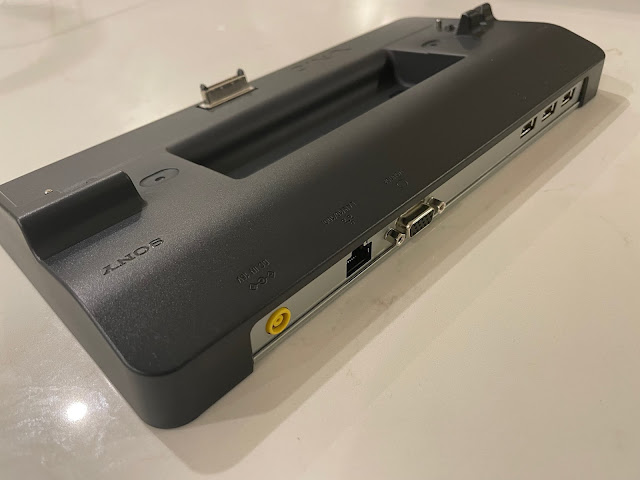 The laptop sits nicely on the dock, but nowhere to lock in place, so you can take it off at any time - a good and bad thing I suppose! 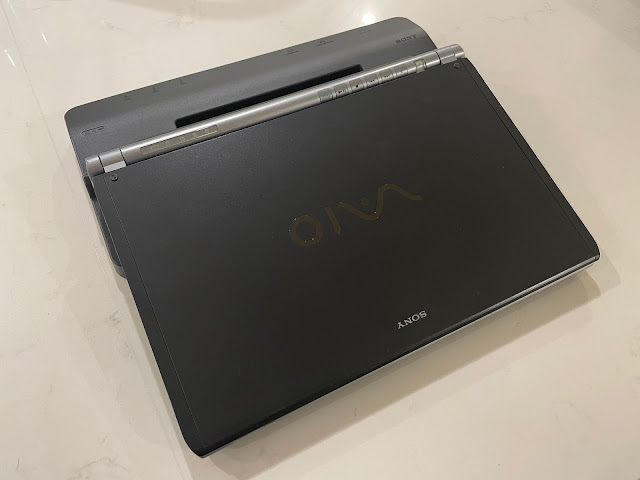 Anyway, I had some spare Australian power cables to replace the Japanese power plug versions, so I swapped them out and could then fire up the laptop for the first time. 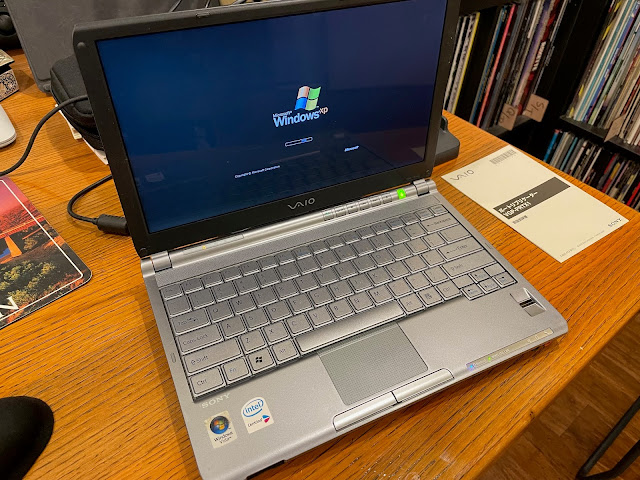 The screen is perfect, the DVD drive works well too. But, ahem, it's all in Chinese and I can't read Chinese at all. What to do...

Google Translate to the rescue. I use the app on my iPhone with the real time camera function to translate what was on the screen into English (not well I know but better than nothing).

I could then get the system sorted out how I needed to for the next part - the rebuild into English.

So why did I need to translate it if I was going to wipe it anyway?

Well, in this era, Sony provided the recovery media on CD's only - nothing on the hard disk. I don't have the recovery CD's and I couldn't find the recovery CD media online for this model Sony. I tried using one from an older model I could find, but it wouldn't work with the computer, so obviously they check the model as part of the recovery process.
So I needed to pull off the drivers from this working chinese language install of XP first, before wiping the hard disk. Otherwise nothing would work and those custom buttons would be a useless decoration.
No problem. I have lots of experience working with XP for work, which I still remember quite well. I found my way around to get the drivers and copied them off to a usb stick.
With that done, I then booted from a Windows XP Pro SP3 CD and started the installation to get an English version installed on the laptop. 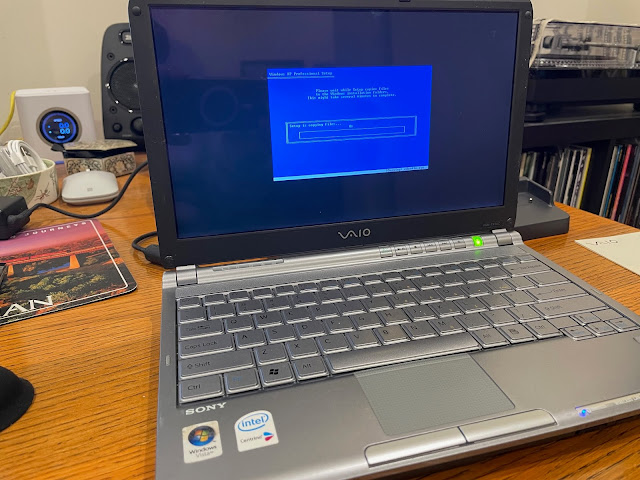 The setup screen is sooo small. Really need a zoom function for those low resolutions... 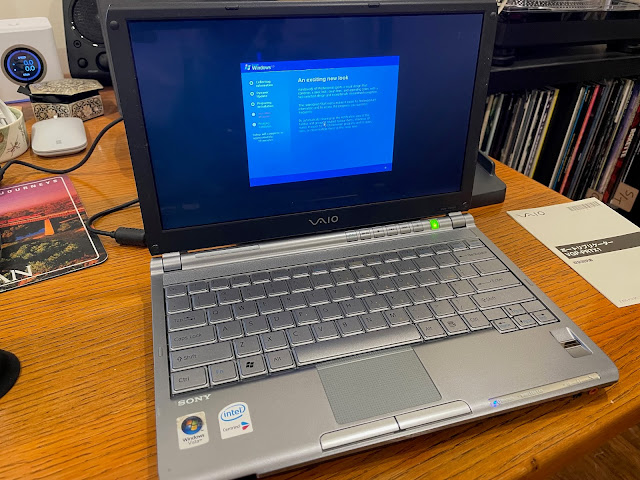 Anyway, the installation went well, I installed the drivers I backed up, and all the the devices work perfectly, now in English! 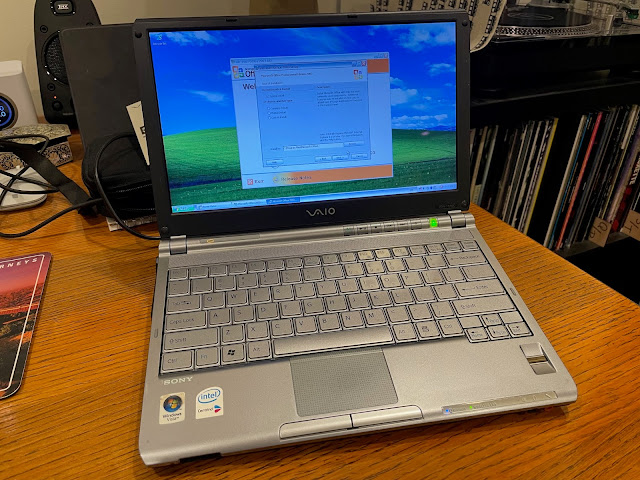 I set to work installing AVG Antivirus (still supports XP), Windows system updates, applications like Office 2003 and games from that era, keeping in mind this is not really a gaming laptop at all. But things like Age of Empires work well on this machine. I used to play it on the long flights overseas :-)

Anyway, I just wanted to share the re-build of the laptop in case it was of interest to anyone!

I am on the hunt for some other rather special Sony Vaio models released only in Japan. If I manage to get one I will certainly cover it here!