Ever since I saw this rather cool and uncommon Sony Vaio computer while working in Japan in the mid 2000's, I knew I had to get one. Now finally, I have one - a PCV-W121! 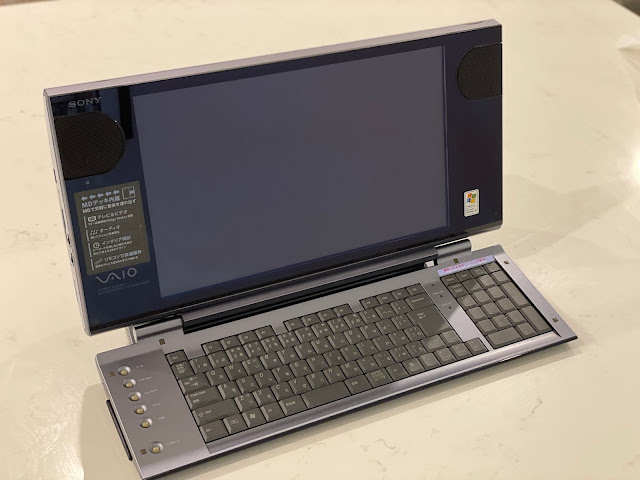 What is special about this Vaio compared to the many other All-In-One Vaio PC's Sony made at that time? Well, it has a built-in Minidisc NetMD drive, fully readable by the Vaio! 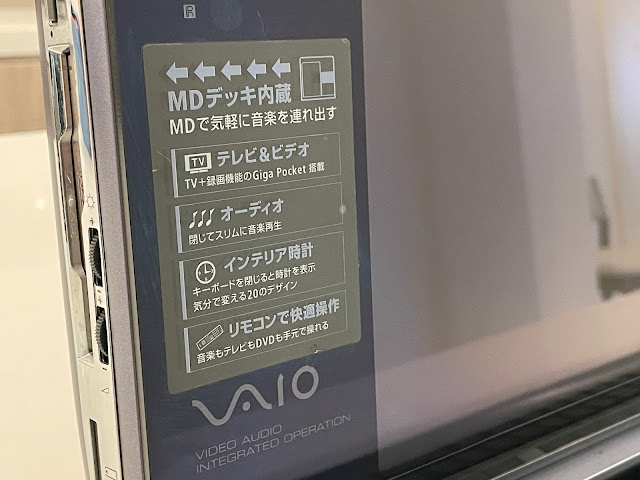 Sony used to make some special Japan only Vaio systems. When I was working in Japan in 2005, I picked up a Sony Vaio U50 back in the day, which was an amazingly small (for the time) touchscreen handheld portable computer, with dock, foldable keyboard, trackpoint mouse, stylus and more. 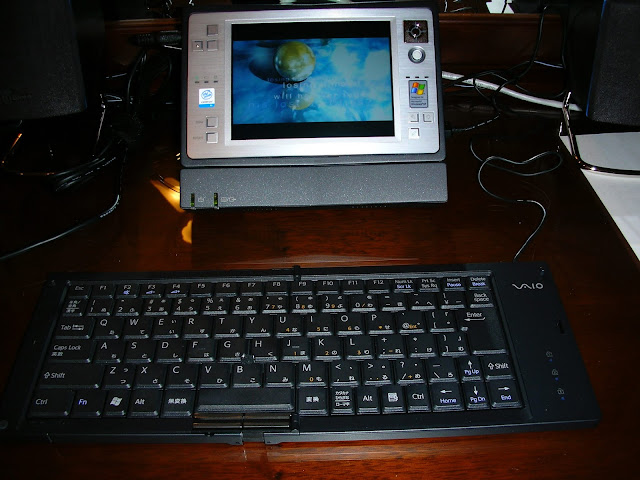 My frequent trips to Akihabara on the weekends turned up some amazing Japan only computers, like the Onkyo DX Dual screen laptop (Kohjinsha rebranded), and many others too.
As I covered previously on this blog, I got a very small Vaio TX series laptop from Japan earlier this year, which was a computer I originally saw in Akihabara and in South Korea in 2005, and bought one to use for work for the next few years. Sony made some great computers at that time, filled with functionality! 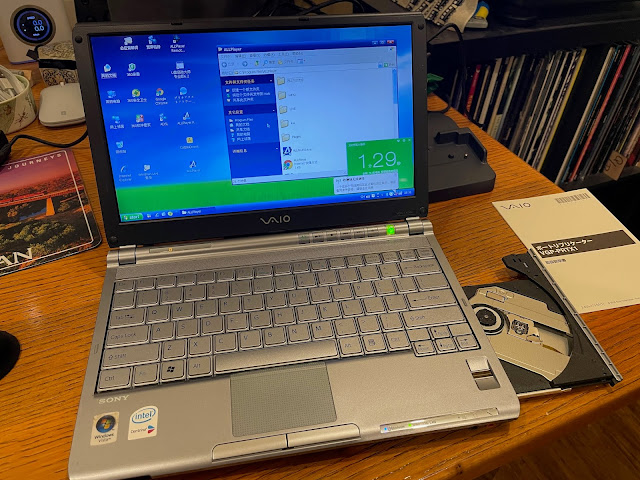 But this machine definitely got my attention. This is a PCV-W121 model, with a flip down keyboard with media shortcut keys, built in TFT screen, speakers, DVD drive, PCMCIA slot, Firewire, USB and TV functionality built in, with a remote control! I never thought I could buy one at the time, mainly because of the cost, but also because the difficulty in shipping it. So, I let it go.
In 2021 though, my interest was rekindled after picking up the Vaio TX laptop, and decided to see if it was possible to track down one of these computers in Japan. Luckily for me, I was able to get one, and quite cheaply too - around $200.
Main issue was shipping it without breaking the screen, all-in-one body, or the keyboard. This ended up being shipped in a large box with a ton of bubble wrap and cost more than the PC to ship...but it is here, and in one piece! 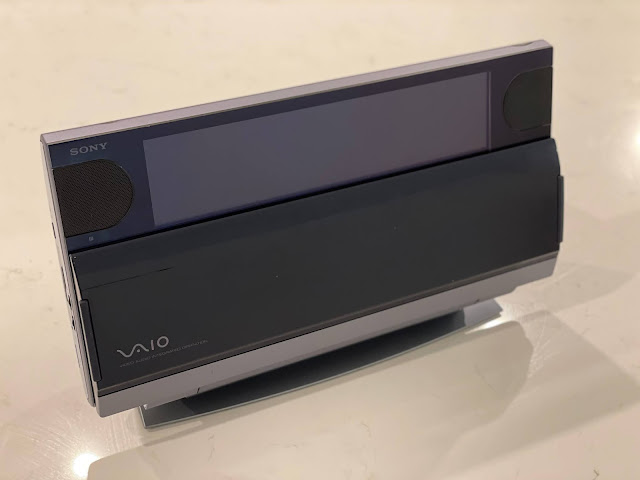 Let's take a closer look at it. On the left side is the Minidisc drive, SD card reader and volume and contrast/brightness for the screen: 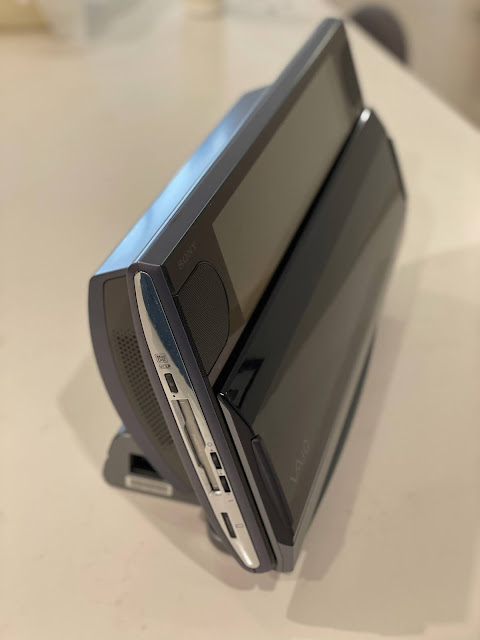 The whole screen can tilt up and down for optimal viewing: 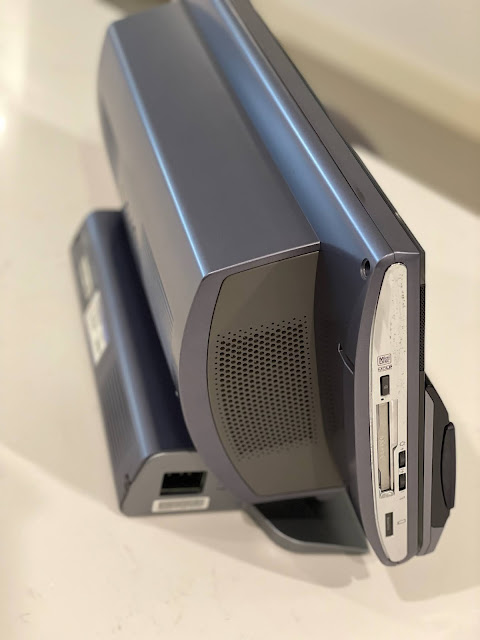 Here is the Sony Vaio PCV-W121 model information - as you can see being Japan only it is 100V ONLY - so I needed a step down transformer to use it in Australia. 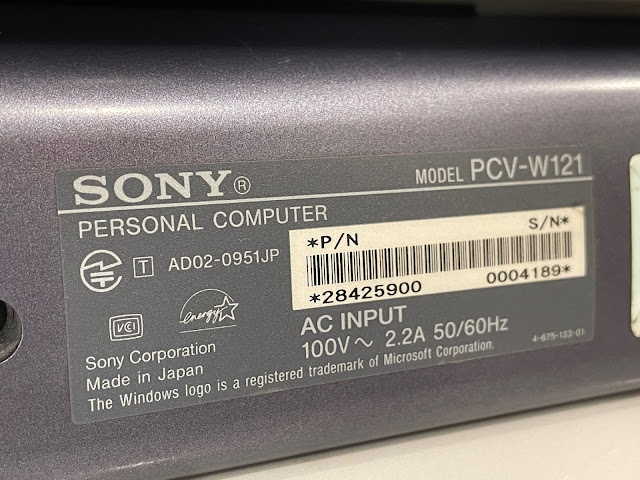 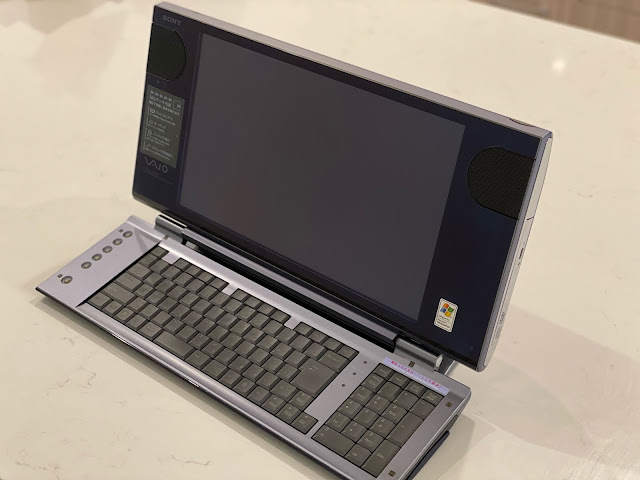 Closer view of the hotkeys used to launch the Minidisc player, DVD player, TV and other shortcut buttons: 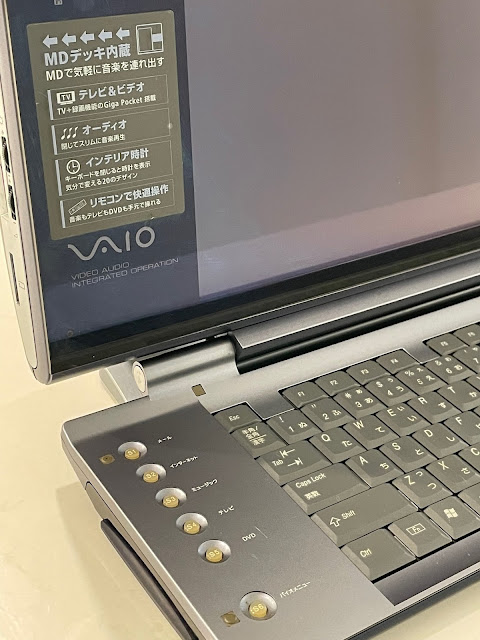 This computer is running Windows XP Japanese language version, common for the time period, and booted up first time with no issues. Yes! 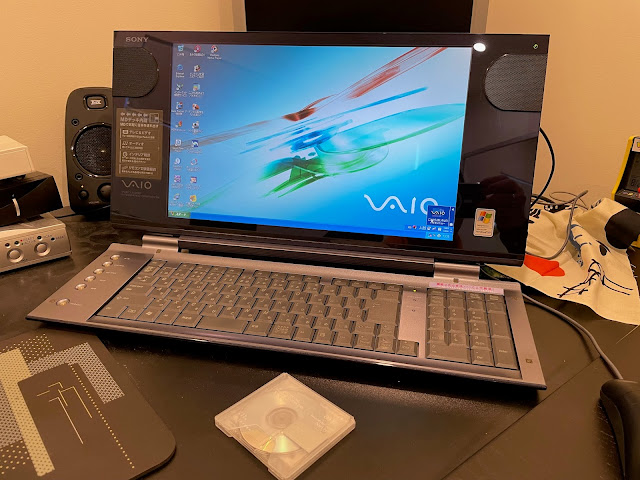 It was back in 2011 or so that I sold off my extensive collection of Minidisc recorders, players, and a pile of minidiscs as I had converted them all to MP3 and felt I no longer needed them.

Last year, I bought an album from local Adelaide musician Tim Koch, which included a special limited Minidisc version of his album Spinifex, as well as the usual MP3 songs.
Until now, I couldn't play the minidisc, but now I can! 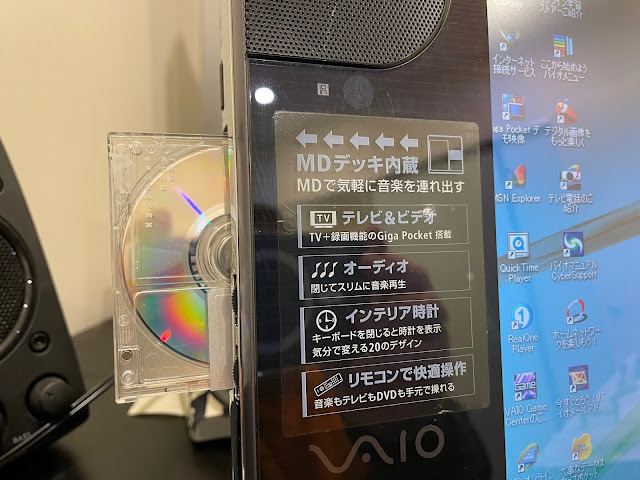 Can't tell you how strange it feels putting a minidisc into a Minidisc drive built into a computer, but it is really cool! 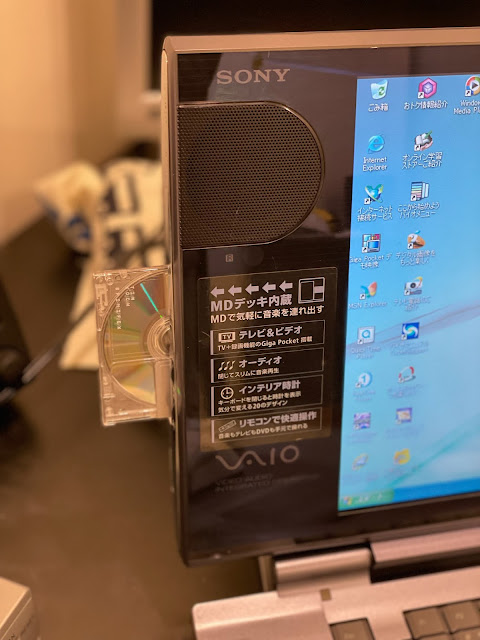 I then pressed the Minidisc hotkey on the keyboard and Sony's SonicStage software started up, and shows me the Minidisc song titles in the player interface, ready to play. 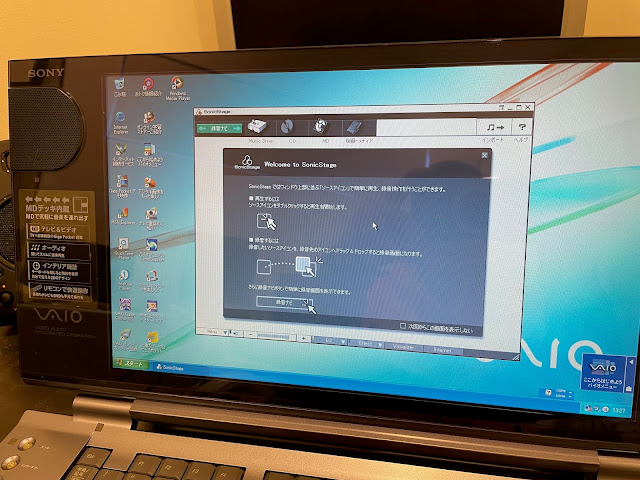 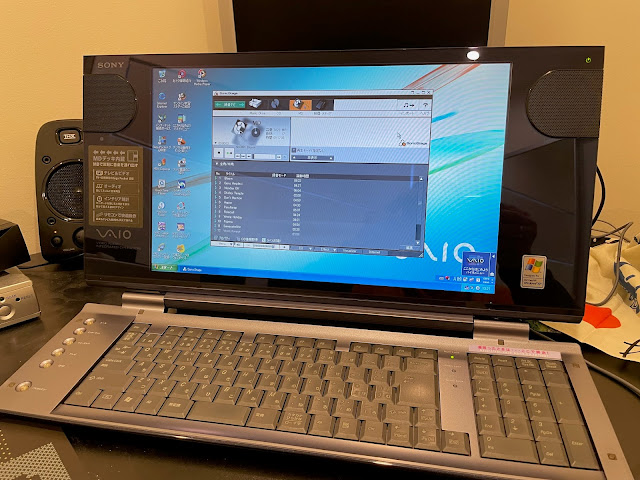 Better screenshot of Sonic Stage running on the Vaio: 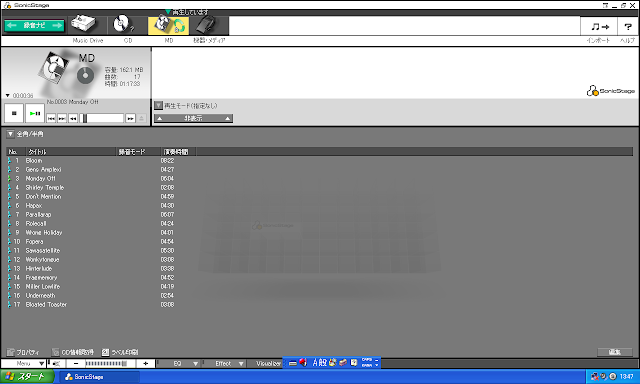 The cool part is while it is playing a Minidisc, CD or other media through Sonic Stage, you can close the keyboard and Sonic Stage will change it's display control interface to fit the new remaining display, showing the current playing song and controls to go to the previous track, next track, pause, etc, which is controllable from the mouse. 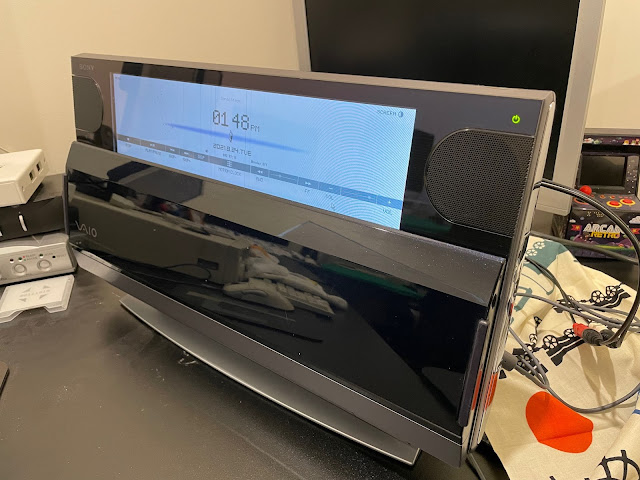 Close up of the display, which has an animated background and rotating Minidisc while playing from Minidisc. Very cool. 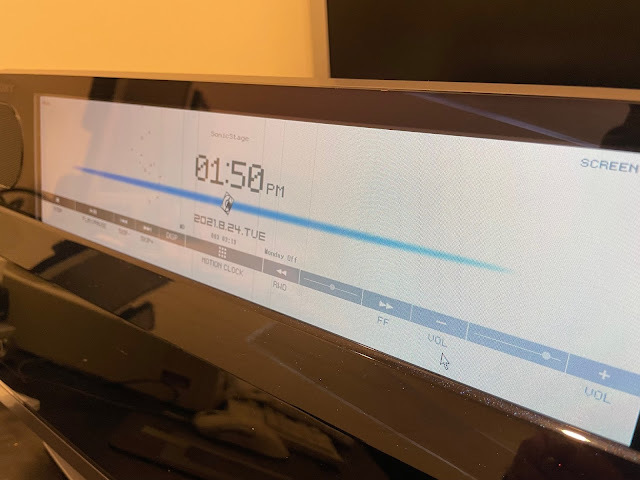 In addition to the mouse, you can also use the included Vaio remote control! 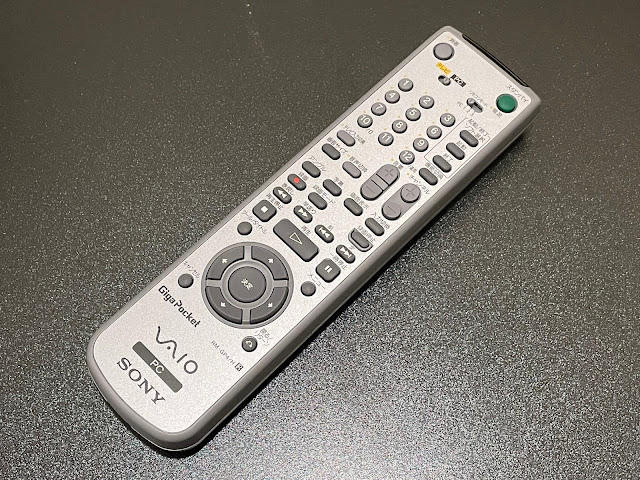 The remote is quite useful, controlling track playback, and allowing easy selection of applications and functions on the Vaio, using cursor keys on the remote to navigate and select: 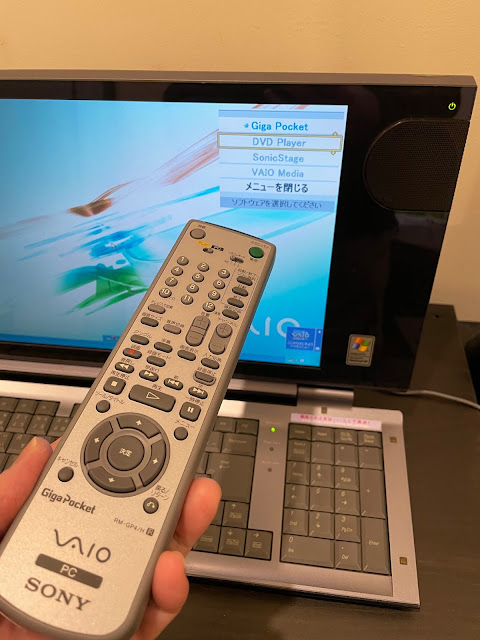 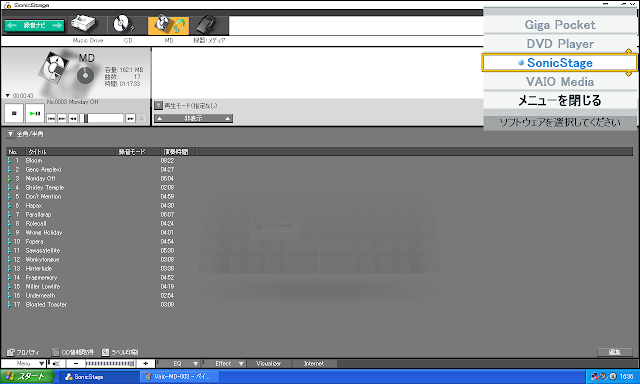 A quick Google made me realise that some artists are releasing special low run (<50 copies) Minidisc versions of their latest new release albums as part of World Minidisc Day each year. I plan to pick up a few more of them now that I have a Minidisc player to use again.
I also pulled out one of Japanese Train DVD's to try out on the Vaio's DVD player, which naturally is using the Japan DVD region code. 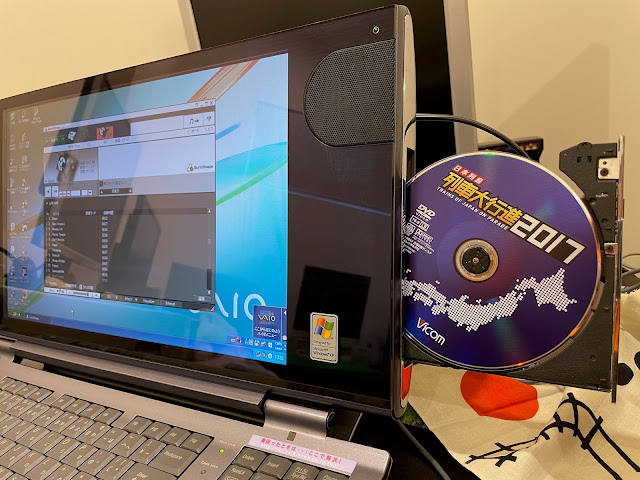 The DVD then launches into the included DVD player: 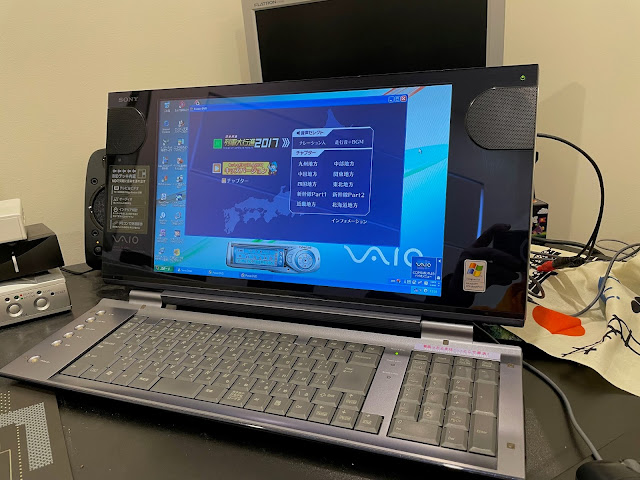 I have to admit, this machine is pretty cool. I know watching DVD's on a computer is nothing new of course, but this all-in-one form factor is new to me - generally I have laptops or midi tower computers. 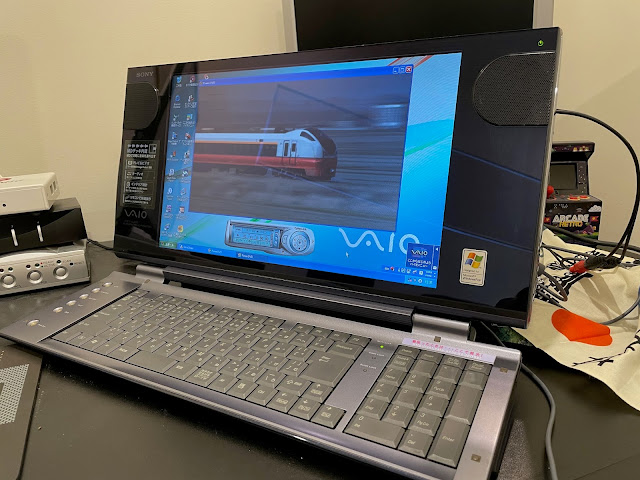 You can also view the DVD full screen naturally: 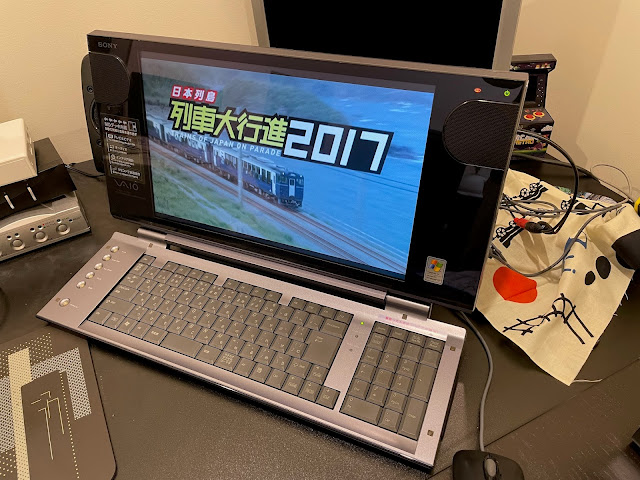 I was surprised that the Vaio Game Centre software on the Vaio included the Japanese Train simulator game called Densha De Go! (Go By Train!), which is cool. 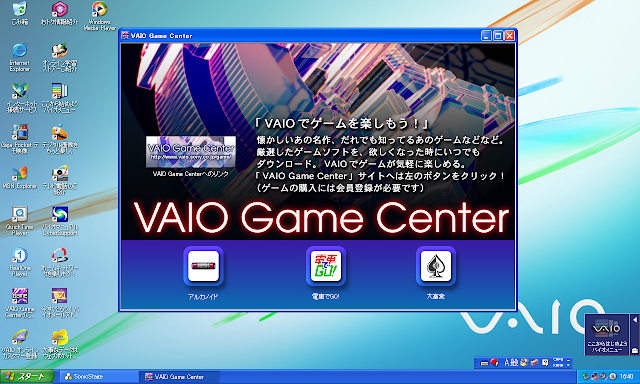 The resolution of the game is very low though, and the Vaio doesn't appear to have a scaler (that I can find anyway) to make it fill the screen a bit better. 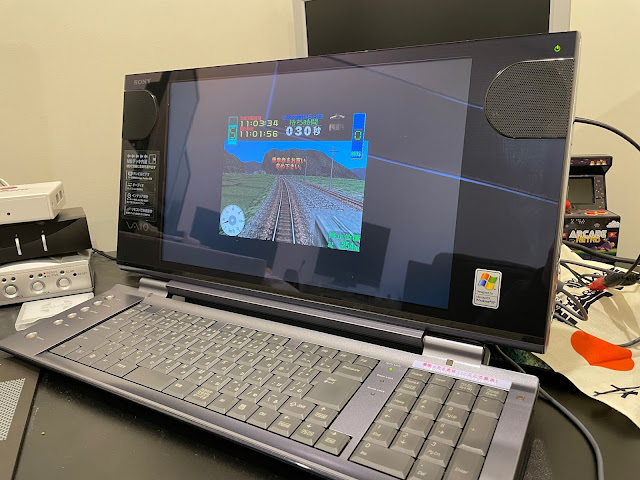 The Giga Pocket function activates the TV functionality, which is great if you are in Tokyo or another city in Japan, and kinda useless if you are not. I wonder if you can feed general video through the TV cable connection on the Vaio, which is Japan specific. 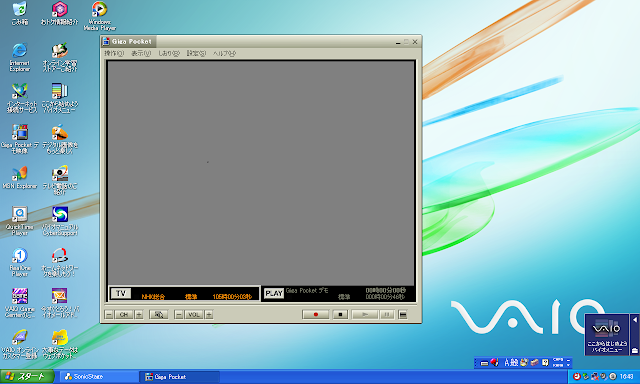 You can play the demo though to see what you are missing out on - the screen grab couldn't grab the video sorry, so I can't show that here.

If you are interested in getting some of these cooler Sony Vaio computers that are Japan only releases, and you don't live in Japan to check out the second hand shops for the bargains, you can look for them second hand on Japanese Yahoo Auction or Mercari services.

You can use a forwarding service like Buyee or FromJapan to purchase on your behalf and send the items to you overseas - make sure to use protection packaging if they are fragile. Costs more for the freight, but it generally offers some protection from the bumps, drops and other things that happen to packages these days before you get them.

I plan to enjoy this new Vaio for some time to come! I hope you find it interesting too :-)