The first years of the ’90s were a gold mine as far as Amiga games were concerned and developers across Europe consistently released incredible titles. The second Lotus game was one of these, with its focus oriented to an arcade type of gameplay in which you had to complete different tracks in a series of […]

The AmigaGuru’s gamer blog has certainly had a rough year so far when it comes to the actual content. Writing articles takes time and those that know me well knows that I refuse to post an article just for the sake of posting one, and yes, this is not a news site either which means […]

One of the strengths of the Amiga - at the time - was that it generates a "native" PAL/NTSC video signal, compatible with that of any home TV, making it naturally suited for video and broadcasting production.

Yet another update of IFF ILBM imageviewer xiffview for Linux computers. Now it can double- or triple-scale image, display individual bitplanes, give color information, and a couple of other features have been added.

xiffview is slowly turning into quite a usable tool. In addition to the aforementioned, it also got a brand new status bar for user messages, a rudimentary online help, and it displays pixel coordinates when the mouse moves over the image.

Rod Land is a platform game originally developed and published in arcades by Jaleco in 1990. Following the success of the arcade, the game was ported to the Amiga and published by Storm in 1991. The player(s) control one or two fairies, armed with a magic wand (a rod), that has(have) the ability to freeze […]

Are you not entertained? Don't worry, we have more new Amiga games!

Oops, it's been quite some time, catching up with 2021/2022 Amiga game developments: an old platformer got remade, "Black Dawn" got another sequel, a new turn-based strategy game was released, an iso-3D adventure game got re-released, and good old Pac Man makes another appearance.

Originally created in 1985 for the ZX Spectrum, and first released for the Amiga in 2001, the "Abu Simbel Profanation" recently got a facelift remake for AGA machines.

Even more games, no time to lose: more first person shooting, yet another puzzle game from Simone Bevilacqua, and two point-and-click adventures in this issue of Games galore.

Actually I don't like the Competition Pro joysticks too much. A kind-of review.

I think the Competition Pro puts unnecessary strain on your wrist, and has some other disadvantages.

There's no short cut, we gotta get them all: an updated racing classic, and lots of work in progress.

Top-view racing classic "Supercars" gets a new release in AGA shape that goes by the name of "Supercars II AGA". This actually isn't a new game, but more like an updated version of "Supercars II". You still drive around a course on a scrolling map, still try to outmaneuver, or simply blast away, your opponents - and it's still great fun, or maybe now even more, with 256-color graphics and some other little enhancements.

Over the last few months I've looked into several different subjects with no particular focus, but I got some results nontheless.

I finally got around to installing my new Vampire 1200 v2 accelerator into my Amiga 1200 and it works great! A Vampire that actually works for me, finally! 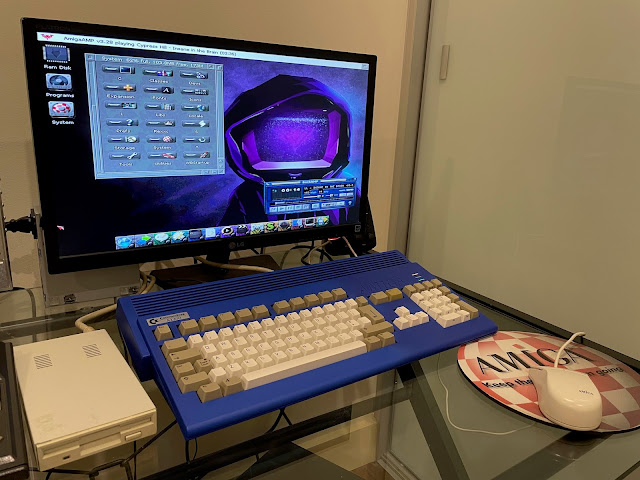 Amiga game development is moving fast - so are we: this time we have two first person shooters, a port of an 8-bit platformer, a new fighting game by the author of "Invyya", and another new jump and run game.

Recently, a couple of PC games based on the "Build" 3d engine were ported to the Amiga - on of which is 1997 PC first person shooter game "Exhumed", also known as "Powerslave".