Custom illuminated frame in my playroom

Most of you might already know about the nice rendered wallpaper that user Intercepto created on DeviantArt.com
http://intercepto.deviantart.com/art/16-bit-Memories-180838346

Anywayz, about 1.5 year ago, I managed to find this as a poster from a forum link that I can't remember. I made the order and it reached my door pretty soon.
The poster was pretty wide (as the wallpaper is) at about 135x62cm and a custom frame was ordered in a nearby frame shop.
When I received the completed frame with poster and mat glass and everything was alright, I realized that despite I loved my newest frame... the picture was indeed very dark and details weren't visible.
The only thing what you could see was the A500 with Cannon Fodder, the lamp and the window :( 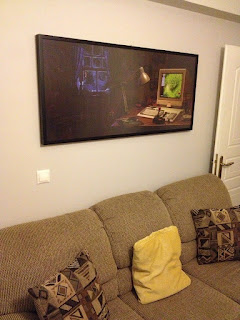 This wasn't nice for my taste and whatever effort I put into giving a little light to the frame had bad results so I had to do something more drastic!!!

So... after searching around, I thought of putting LED strips behind the poster for it to get illuminated (like the posters of movies most times seen in Bus stops etc. Bad thing is that these are in rather thick frames with big fluorescent lamps installed. Rather easy stuff, but my case was indeed more challenging cause frame was thin enough having a large carton behind the poster to hold it together with the frame.

My order from eBay consisted of 4x 5meter LED strips, 1x Remote control to On/Off the LEDS and a PSU for powering them 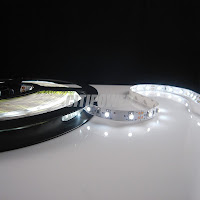 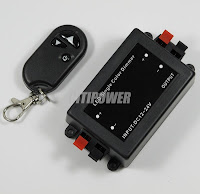 Order took about 2 weeks to reach my doors and when it did, I made a quick example of fitting some LED strip lines sticked with some duct tape behind and attached to the poster...
WHAT a terrible example that was... 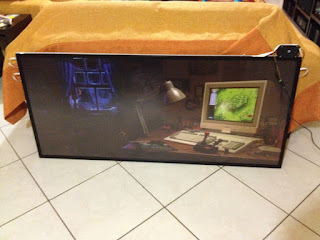 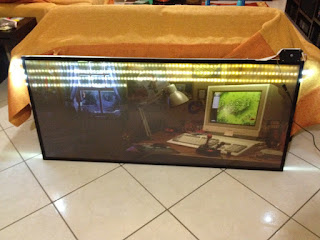 As you can clearly see, the LEDS are clearly seen and the poster isn't showing at all. OK I knew that this was an example, but I had to do something more drastical.

So... I ordered a Plexi-Glass that was milky white in order for light to be diffused better into the Plexi-Glass and then to the poster itself.

This is how it looks attached to the back of the poster. 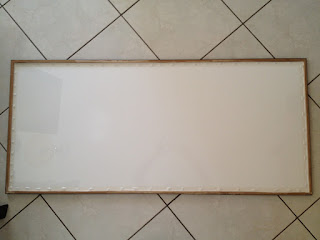 Except from the milky Plexi-Glass, I ordered another piece of 3mm wooden backplate, in order to use this to mount the LED strips. Using the already mounted carton was a NO-NO for 3 reasons.
1. It was cut to be attached to the back of the poster (alas if I mounted the LEDS to it... it would attach to the poster as well)
2. I was afraid that LEDS would be kinda HOT so I wanted some space between the LEDS and the poster
3. Using it on the back of the frame would have gave me a bit more of space for LEDS to be more far from the frame so still not so visible. 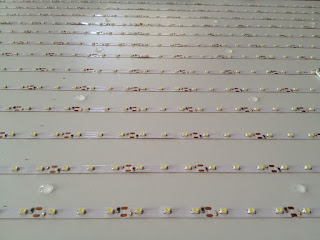 It took A LOT OF TIME to measure EXACTLY the width at which the LED strips would be mounted in order to be ok (you can cut every 3 LEDS in every strip) and for all 20m of strip to be enough!
OFC all the cut strips, had to be soldered and bridged to each other via thin wires (15 strips x2 sides x2 solder joints each! Do the math and you'll understand the work!)

After the bridging I had to build a custom PCB that would hold all the power lines from all 4x strips. 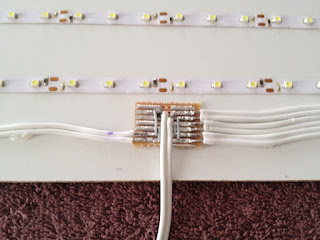 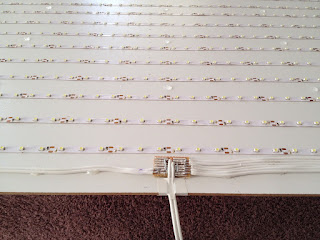 So now I had only one cable that would power all 4 strips at once :)
(FYI, you can't bridge all 4x strips together in one line cause then after the first 2 strips the light on the other 2 is dimmed and looks crap! Different power per strip is the best).
It was about time to test the strips, so I connected the PSU and powered up the backplate and VOILA! 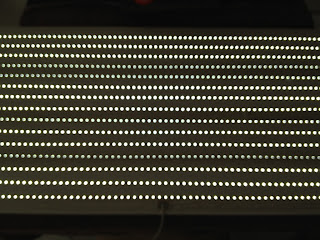 I was very happy that I haven't blew up anything, and I was ready to give some test to the final frame...
Result was indeed A LOT BETTER... 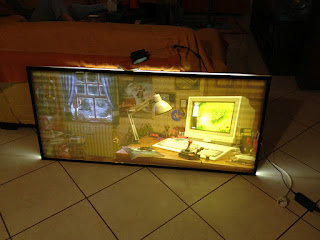 I still DIDN'T like it 100% though, cause after I sticked the backplate with the frame... the strips where visible again (not at the level they were but still... not good for my taste)...
Grrrrrr....
I went to the frame shop again next day and ordered another frame but this time it wasn't 1cm thick but 3.5cm+ wide.
After putting it back together and closing the backplate, I hanged it on my wall and I was ready for the big and final test... 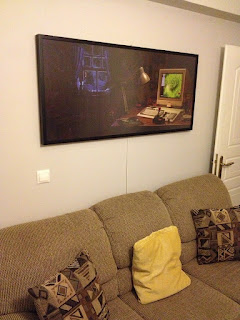 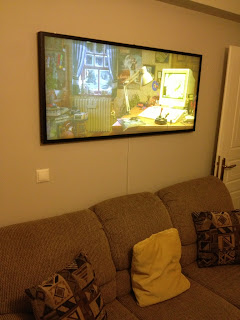 YEP, and this time was PERFECT!!! Sadly the images can't show how beautiful this frame looks with the backlight, and dont' forget you can dim it with the remote control if it's day or night according to your needs.
(I need to cover the cable and paint it with wall's color but that is really minor atm).
I hope you like this mod. It's not exactly Amiga hardware oriented but hey... At least it has an A500 with Cannon Fodder LOL.
Soon more to come :)
Read more