I thought I'd collect a small collection of tools that will run on Jamiga2 when milestone 1 is done (more info on what milestone 1 is will follow). These will consist of either currently available console applications, or existing Java open-source frameworks packaged by me (or someone else) using minimal coding.

A very simple Telent/SSH client, based on the JTA framework. It actually has a GUI client, but with minor effort a very simple console based telnet client has been made working. See below for a screenshot of it running on my amigaized JamVM source and GNU Classpath 0.99 (with GUI support). The system is Ubuntu Linux in a VMWare on my MacBook Pro, so its Intel, not PPC. 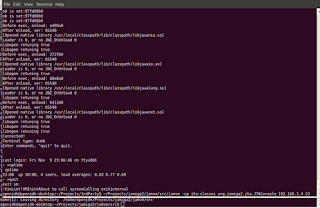 What you see is JamVM spitting out stuff like "[Opened native library...]", "libopen returning true". The text "Connected!" and the following lines are actually the Java program connecting to the telnet daemon on MacOS. I entered "uptime" which was sent to MacOS, who so kindly responded with the uptime. I wrote "quit", which the Java program takes as a signal I want to quit, and then JamVM spits out "exit vm", and exits.

Again, nota bene: this runs on Linux and Intel right now, which you probably can deduct from it not looking like Amiga. But just to be clear, so I don't fool anyone.

By using Twitter4J a simple console application allowing for status updates and listing should be feasible. Together with some clever ARexx scripting, integration with f.i. Ringhio should not be impossible.