A600: Some minor overclock plus some new video

I've been tinkering a lot my A600's environment all this time plus making some efforts for my GREX 4000 but that will come in a different article in the following weeks.

I removed the old CPU, putted the new one and this is how it looked without the heatsink on. 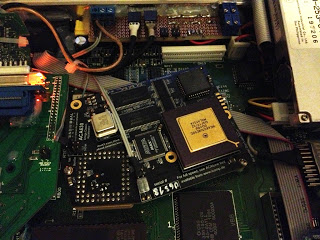 I used the 80MHz oscillator that I had, in case I managed to use it @ 40MHz and system booted just fine.
I also made some nice benchmarks etc... but after 3-4 minutes system crashed so I can say with certainty that on my accelerator 40MHz overclocking is not an option.

I changed the oscillator to an 72MHz one (thanks to Fitzsteve who send me one spare of his) and it worked like a charm! After hours of keeping my A600 on... I NEVER had a single crash or Guru!!! \o/
Not bad having an 15% speed increase by all means :)
If in the future I manage to find an 75MHz oscillator I will try that as well in case it works and that's it.
Btw... EVEN after many hours... the original heatsink (that I re-attached with a new thermal pad) gets only a bit warm. With the previous CPU even @ 30MHz the heatsink was very hot alas I had put a fan for safety. Now @ 36MHz hot is not an issue and ofc I removed the fan as it had no meaning :)

Some of the new stuff I tinkered on my Workbench installation was to install PeterK's 46.4.279 icon.library which give a nice 15-20% speed increase from what I can tell. Really shows nicely when I open PNG etc icons but I will let you be the judge of that :)
I also made some changes in the VisualPrefs skins and settings plus I also installed X-bEnCH and made some nice changes in scripts/startup-scripts and custom BMenu entries to support it.

To conclude this article...this is a new video that I put today on YouTube that has a small revision of what my system boots and acts like. I hope you like it :)
(I suggest you to see it on YouTube's website and change the resolution to 720p as I uploaded it in HD for better viewing).