Hey my fellow Amigans... most of you won't even bother reading this article as it contains info about Greek support on OS3.9 only.
For the Greek readers though... it can be informative though so here goes :)

First of all, OS3.9, comes by default with many Localization language packs (including Greek) from the official Haage-Partner's website which you can check out here:
http://www.haage-partner.net/download/AmigaOS/BB3.9-2-Locales/

The Greek support pack, includes a Keymap toggle application (named "Hellas") which is put from the installation script on WBStartup folder plus the required localization files and the Greek keymap.
So far so good, and everything works out just fine.
The bad thing with this pack though... is that it installs USAELOT keymap which be default is the American Greek keymap. This can be really irritating for Amiga users that have an UK English keyboard so some symbols like @ and " are in different key locations.
So... even if you choose GB as the default keymap, onces the Hellas application runs on startup changes the keymap to the American USAELOT which means it screws the english support for UK keyboards.
Sadly there is no way to assign with an option or a Tooltype on the Hellas icon, that the default keymap is other than the US one :(

I remembered that in the past my father had obtained a legal Greek localized version of Workbench 2.1 (for our former A2000 beast back in the days) which happens to also have a Greek Support floppy for already installed 2.1 or 3.x systems!!!

You can see what the booting of the default Workbench 3.1 installation with the localized support looks like 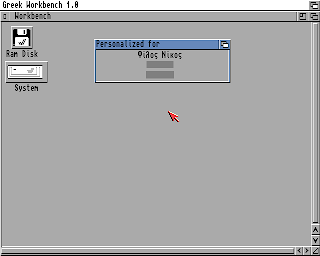 The greek solution of the era (made my Mr. Kostas Tsaousis) had a popup window that showed the legal owner (in the pic you can see the name of my father),  it's telephone number and it's national identity card's ID.
While searching the archive I saw that the required files needed for the Keymap toggle in the WBStartup folder where 2 out of the 4 installed: MenuKeySwapper and KeymapSwapper. 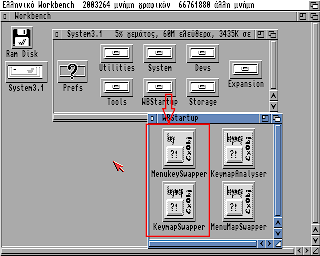 If you check the information of KeymapSwapper application you can see that there are many tooltype variables that we can change! One of them is the SW_Keymap1 and SW_Keymap2. 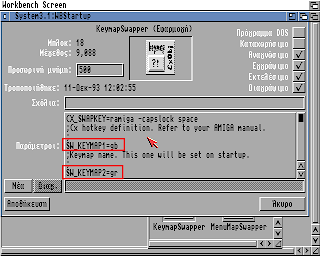 By default the SW_Keymap1 was equal to USA so I changed it to GB and voila! Everything worked as it should!!!
It was a time to make a test on my beloved custom ClassicWB3.9 installation.
After taking a backup in case I screw something up... I removed the Hellas application and instead of installing the GreekSupport of Mr. Tsaousis, I putted the files manually cause I didn't want the setup to overwrite my Locale files (after all the installation was at best for Workbench 3.x so localization would have screwed my OS3.9 localization).
What I discovered was WHEN the KeymapSwapper application run... I had an error message that the SW_Keymap2 couldn't open the GR Keymap. Hmmm that was odd cause I thought that the keymap file from the 3.9 Locale would have been compatible. I guess I was wrong since when I overwrote the gr keymap of locale 3.9 with the one from the 3.1 GreekSupport the application run just fine and I could use Greek just fine on my UK keyboard!!! Hooray!
One thing that I also realized that despite everywhere I could change the language from English to Greek (via the hotkey LAmiga-Space) I couldn't do it only in VincED. Ok someone can say easily who cares... you can ditch VincED for KingCON :)
The keymap toggle indeed works in normal CLI windows with KingCON, and I already have KingCON on my ROM so no big deal. It was irritating though so I thought about searching for a way to do it as well!
After lotsa of fiddling around I FOUND IT!
It's just a tooltype change that is required named SEARCHEXEC which is by default on YES. If you change it to NO then VincED works just fine as welll! 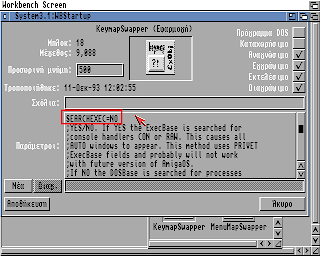 You can see it on my ClassicWB3.9 working normally on VincED \o/ 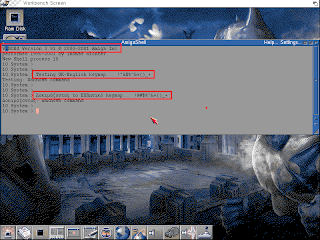 Ofc... the greek keyboard can't implement the UK keymap as it's by default USAELOT but that is really minor. It's the same on Locale 3.9 and all greek keyboards I know.
One other thing I realized is that the Locale 3.9 greek support, has the ACCENT character one button right as we all greeks are used to (in " instead of ;). Mr. Tsaousis Greek support solution has it normally in ;
The only thing that was kinda irritating, was the popup window that showed my father's info.
Don't get me wrong, I love my father, but seeing that popup in every boot was really crappy.
My friend Cass from AmigaHellas helped me out but checking the binary of the 2 needed files that had the code that called intuition's library function. By dissasembling it, he saw what was happening, and made an alteration to the binary so the window won't be called upon running!
That was it. Now the applications run just fine and the annoying popup windows doesn't show!!!
Thanks a lot Cass my friend \o/
Despite I don't like Greek localized OS3.9 (I can enabled it at any time via Locale prefs) prefering the English one... the solution for Greek support writting is better than the original one thanks to my former greek support solution! I'm glad there's something from my Amiga past that still helps me out even today.
Read more