Continuing my work for mounting internally my HxC and slim floppy drive, I had some minor stuff that needed to be fixed.
First of all, I needed to put some headers in HxC switches and on the slim floppy drive LED. Both of these wires were mounted directly from the adapter to the mobo and case, so if I needed to dismantled and remove the floppy it would have been messy. 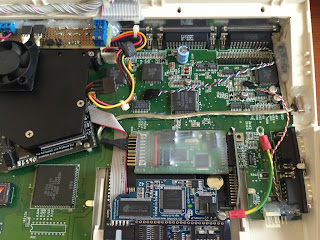 After this short but essential replacements, I had to thing WHERE I should mount the SD card from HxC :)
First of all as you can remember the SD card is on the middle. First idea was to simply cut a slim hole in the upper case in order for the SD card to be insertable.
I didn't like that approach much tbh.

Why shouldn't I use a MicroSD solution I thought! Hmmm
The most important obstacle is that MicroSD doesn't have a lock position. Despite not being so important for most uses, it's rather important for HxC cause you might want to have a disk locked at times (acting as a real protected floppy disk).
You can bypass this by putting a Cheapo SD to MicroSD card which has the lock position as normal.
Why on earth I should use that though, when I don't want to use the SD card slot in the first place?
Looking from HxC schematics I realized then that Lock position is just one pin that is always shorted with GND (if card is unlocked) and unshorted when is locked. Why can't I mount an MicroSD and put another switch for my lock/unlock mechanism them? That's what I'll do :)

Anyway... before I decide where to mount the MicroSD socket, I thought first of getting the signals :) 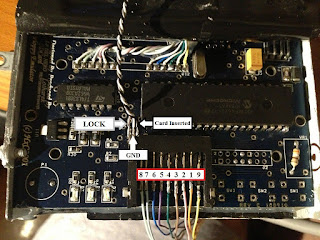 In this picture you can see the 9 signals needed for SD card (MicroSD requires the 8 of them as the one is VSS that isn't needed). Also I maked the signals for Lock, GND and Card Inserted.
And here it's insulated with tape :) 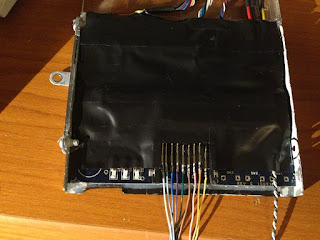 After that I was thinking where to put the MicroSD adapter and then suddenly it hit me!!!
I have an empty spot where the old EJECT floppy button existed! This is the perfect spot not to have an empty hole :)
I didn't want to mount just the MicroSD though in such a big hole... It would have been ugly I though!
Then I saw an eject button I kept from the dead floppy I salvaged for Part 1 and I thought... "why not use this original button in the eject place, mounting the MicroSD adapter inside?"

These were the first comparison tests... 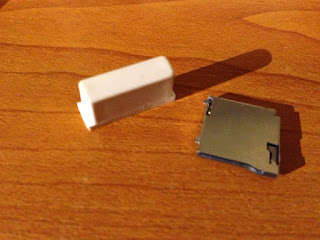 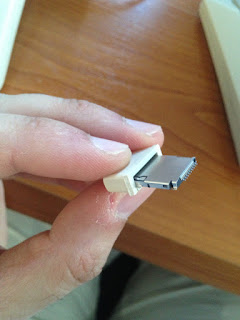 Damn it fits like a glove!!!
After a LOT OF TIME with the drill, swiss nife and a LOT OF PATIENCE... this was the result... :) 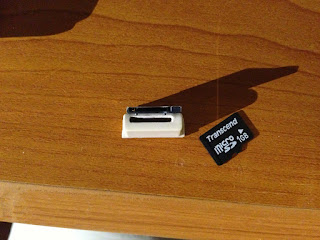 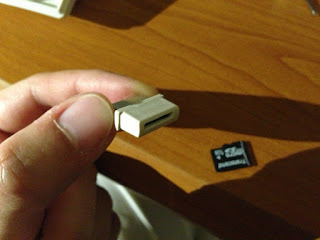 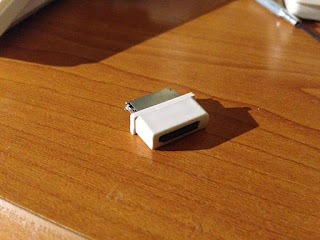 MicroSD connector was instant glued in the upper place (to leave space on the bottom for HxC and cabling.
After some Googling around I found the following pic 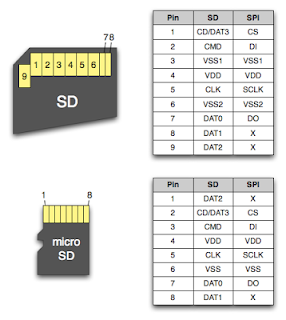 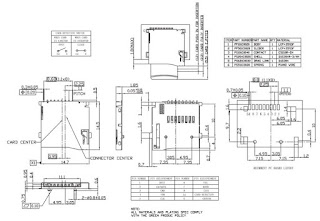 ...I was ready to proceed with the soldering :) 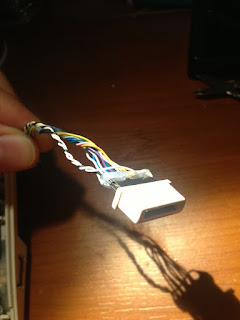 That was some tough soldering since the pitch for the pins was really small.
Ok everything's was set.
I forgot to tell ya that I also got from my electronics store some really small switches that I thought of using for the Lock/Unlock mechanism.
The best spot I managed to find without altering the case more was the perimeter of where the upper case meets the lower case on the floppy area! The good thing on that perimeter spot is that it has a really think plastic layer which was IDEAL for what I had in mind :)
This was the cut I performed after A LOT OF TIME AND PATIENCE. 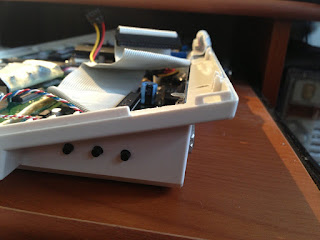 And this is how the modded eject button with MicroSD connector AND the micro switch for lock/unlock mechanism was mounted!!! Awesome stuff aye? 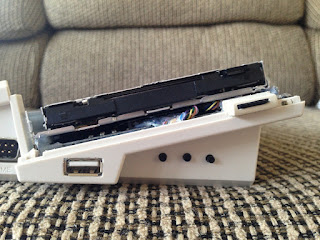 This is how it looks when you eject the actual MicroSD card :) 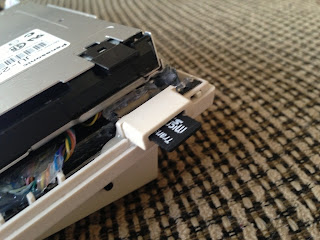 And as always, a panoramic view of my Amiga's innards :)
(You can also see a custom label I made for my Dual kickstart - mfilos Edition LOL) 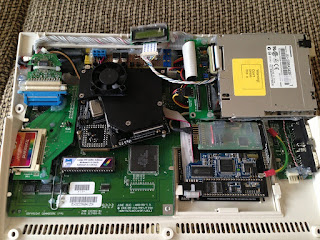 Only 2 things left to be done... but we'll talk about these things on the next part... soon enough :)
Enjoy.
Read more