Today I thought I would take a look at two programs for looking at the realtime network card performance on the X1000 - NetSpeedometer and NetDock. 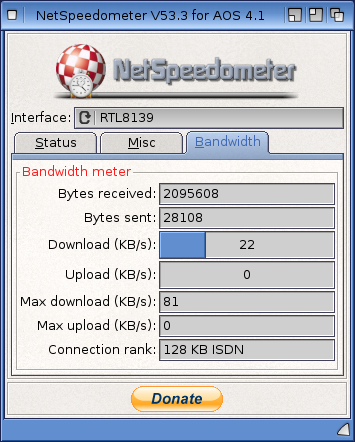 Looking first at NetSpeedometer, it is available on os4depot.net and is written by Massimiliano Scarano.

After downloading the program, it is a simple matter to extract the contents of the archive to sys:utilities. The program is ready to run, no further configuration needed to get it going: 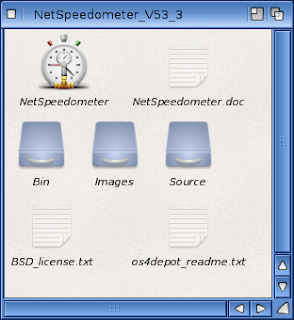 I read the NetSpeedometer.doc - no tooltypes or anything are needed to configure it. It does mention that if the network card device driver doesn't support the SANA-IIR4 extensions: the DNS address information can't be displayed, you will just see 'Unknown'. It also mention an AmiDock plugin could be done if enough people support the development by donating﻿: 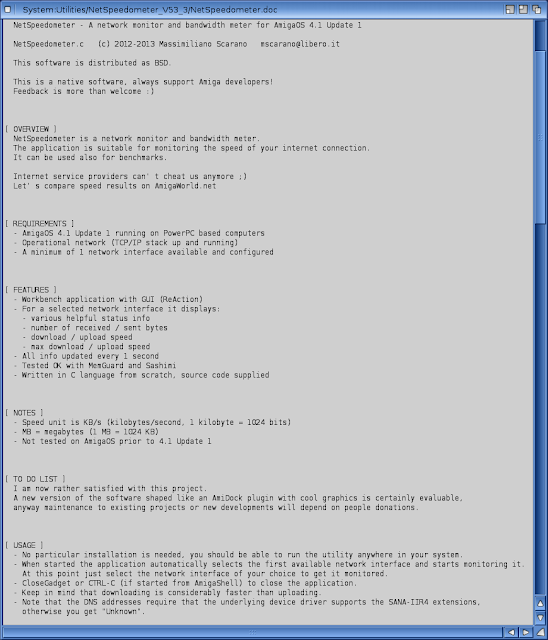 So let's move onto the program itself. The GUI shows three tabs - Status, Misc and Bandwidth: 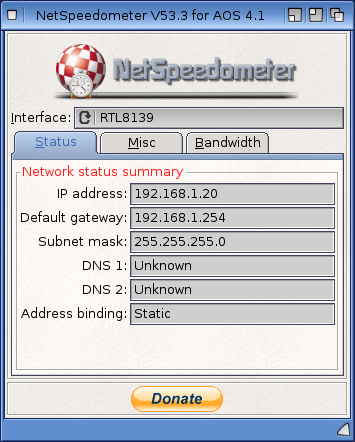 As mentioned in the readme, the DNS addresses used are not shown in the Status tab display, presumably because the standard X1000 network card RTL8139 doesn't support the extensions mentioned.
Moving on to the Misc tab now, you can view the Hardware type, MAC Address, transmission speed and current state of the network interface:
﻿ 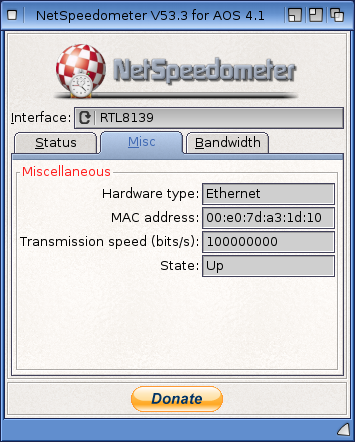 In the example above, the only internet traffic coming down was streaming some internet music via TuneNet. So, to spice it up let's download something! I fired up AmiFTP and downloaded some files from AmiNet to see the results in real time via the NetSpeedometer GUI (Click to expand): 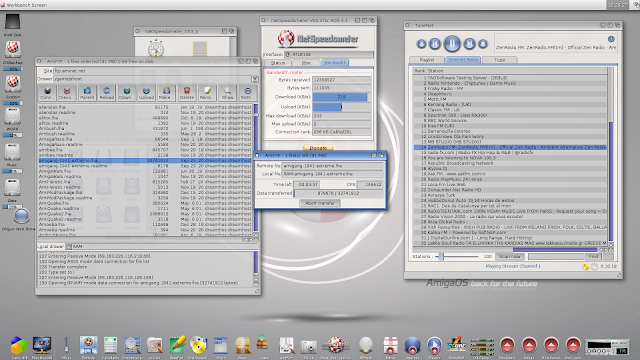 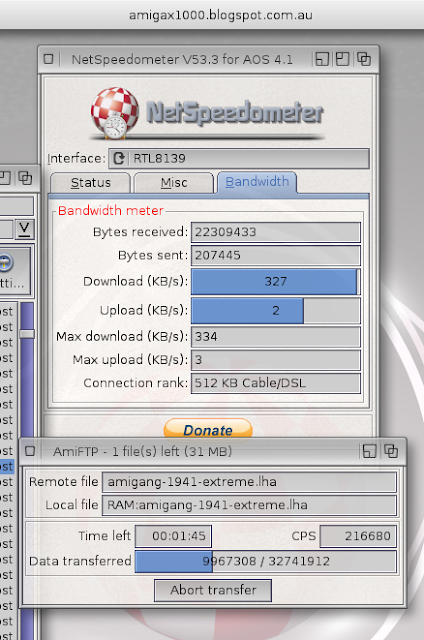 Next, I tried downloading files from OWB at the same time as the FTP session: 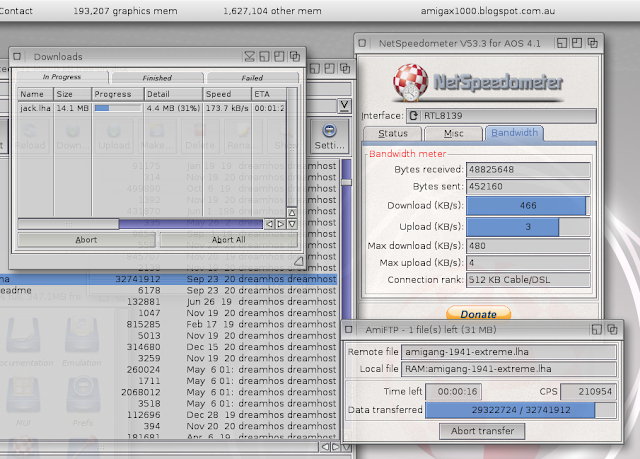 I noticed that the connection rank updates itself since the download bandwidth has increased - it still says 512KB at the best, which is a little depressing since I know the network card is a little slower than I would expect it to be...but that is not the fault of this program.

The program is interesting to see what is happening on the network interface - I think it really does need to have the AmiDock plugin mentioned as a future feature, to make monitoring easier. The author does claim it can be used as a benchmarking tool too. In my opinion NetSpeedometer really needs a graphical representation of the data in real time and the ability to verbose log the data being collected from the interface into multiple flat files for later analysis for benchmarking functionality.

Slightly off-topic, is there a decent Excel equivalent on AmigaOS4 to do this kind of benchmark analysis I wonder? Perhaps this program could be expanded to provide reports based on the data collected to save us the trouble!

Ok, so next up is another program called NetDock, written by Guillaume Boesel (zzd10h). This is also available from os4depot.net.

After downloading, I extracted it to SYS:utilities, and it also doesn't need any initial configuration to get it going, although there are a number of tooltype attributes you can modify to beautify it:

The readme touches on some of the tooltypes available to the NetDock program: 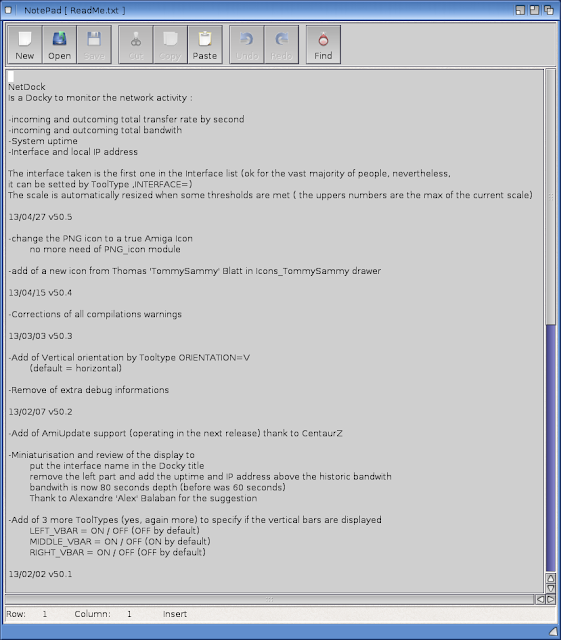 Helpfully, some screendumps of some of the customisations possible with NetDock are shown so it is easy to see how modifying the tooltypes produces different views of the program:

As NetDock is a docky, the progrsm can be dragged into the AmiDock at the bottom of the Workbench screen to start it, as per the warning message below when trying to run the program:﻿
﻿
﻿

Once dragged onto the dock, the NetDock program looks like this:

It shows the Uptime, Maximum speed In/Out, IP Address, and current realtime transfer speed both with numbers and graphically. In my opinion it is great, as it shows the relevant information in a small docky, allowing it fit nicely on the Workbench screen as you use the X1000 (click to expand): 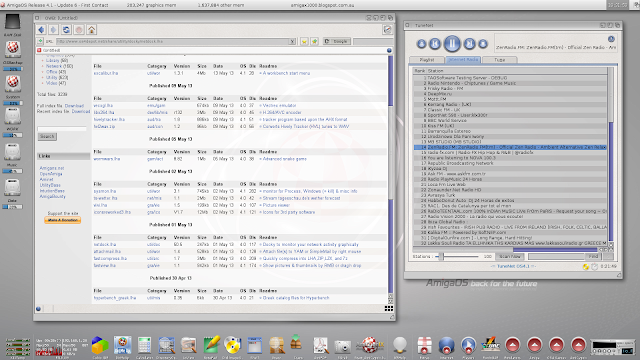 Below is a closer view of the AmiDock only, including NetDock along X1KTempdocky, TuneNet docky and the other usual icons in the dock (click to expand):

As with NetSpeedometer, I did some larger file transfers to see how it changed the stats shown, and NetDock does indeed reflect real time activity:

Both programs are great, although I admit I prefer Netdock as it suits my needs for real time network monitoring a little closer with the graphical presentation of the data, and having the AmiDock plugin is the icing on the cake for me.
I think NetSpeedometer also has potential, as it has a friendly GUI interface to work with, and if the benchmarking functionality is expanded on further, I think it definitely has more uses on the X1000!
I have to say thanks to both of the authors for continuing to support AmigaOS4 with interesting utilities!
﻿
﻿
Read more