Some sort of success

This is getting annoying, but I do have had some success, just this very minute. Even though it doesn't work. 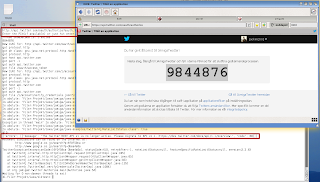 Now, what you see is my minimal Twitter console client. It works relatively straight forward, you get a link to open in your browser in order to authenticate the Twitter console. When you have logged in to Twitter, and authorized the application (currently named "Jamiga Twotter"), you get a PIN which you should enter into the console application.

An error indicating some sort of success

The result you can the see further down in the picture: Twitter responds with an error, saying that the REST API v1 is no longer active. So, it turns out, that the Twitter4J client I tried out is no longer supported. And this happened recently, in March 2013. I had my Twitter console application running nicely on another platform just the other day, so even though I probably should be a bit mad, I'm actually happy getting this error. Because this is a valid really great error! It means that what I've done, actually works. The JVM can communicate with outside servers, and he whole Twitter API parsing works. So this test actually proves that a lot of stuff is working.

Now, to the avail, the Twitter4J people (who's java implementation I'm using) are saying they've fixed it. So it look like I'm just an update and configuration away from having a working Twitter implementation on JAmiga.

Oh, and by the way, I also fixed the "double trouble" with converting doubles to strings.