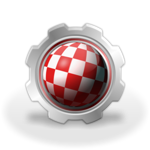 I am happy to announce the release of the finished HDAudio driver for the AmigaOne X1000!

There have been questions about whether full “32 bit” audio really makes a difference. I’d like to dig a little deeper to better understand the technical specifications.

There are two primary factors that contribute to the quality of a digital sound recording. One is resolution, or how many bits per sample, and the other is sample rate, commonly 44100 or 48000 samples per second.

As you look at the waveform of a sound recording, these two numbers determine the vertical and horizontal resolution of the wave.

I’ll begin with the “bit width” or vertical resolution.

The original Amiga’s sound output supported four channels at eight bits of resolution. Eight bits means there are two hundred and fifty six possible vertical “steps” that can be used as the wave is generated. Now we spread those steps across a -2 volt to +2 volt span and we get 0.015625 volts per step.

At the time of the Amigas introduction, that was a pretty fair sound playback. But only 256 steps is not as “high fidelity” as we might like. As a comparison, Compact Disk Audio is reproduced at 16 bits per sample. This makes for a big improvement in resolution. 16 bits offers us 65536 possible “steps” to spread across the -2 volt to +2 volt range. Now the step size is 0.0000610351562 volts per “step” of vertical resolution. So 16 bit audio is a HUGE increase in accuracy.

Getting back to our driver, AHIPrefs offers both 16 Bit HiFi and 32 bit HiFi modes. But I’ll bet that neither of those modes gives exactly what you might expect. As AHI mixes lots of different sounds together, possibly each sound with it’s own volume and pan settings, it can be useful to have more resolution available to work with. Here’s the clue: ALL AHI modes that say “HiFi” are sending 32 bit data out to the sound device! The “16″ and “32″ only describe what goes IN to the AHI mix routines. if it says HiFi, you WILL get 32 bit output to your card!

Or will you? In truth, while AHI is making it’s calculations using 32 bit registers and 32 bit math, it only promises 24 bits of accuracy. Is this anything to be concerned about? Not at all. I’ll tell you why. 24 bit samples will resolve to a “step size” of 0.0000002384185 volts per step. Wow! That is about one quarter of a microvolt. Those with an electronics background can probably tell you, that attempts to accurately work at those levels are just ridiculous. We have reached an accuracy that is beyond the ability of our amplifiers and speakers to reproduce. Put simply, 24 bits is the reasonable limit of current technology, or at least affordable technology.

So our 32 bit samples are flying out of AHI and in to the HDAudio codec. While the ”container” is 32 bits wide, even the “high definition audio codec” that we have in the AmigaOne X1000 only resolves the top 24 bits. So it seems that in the end, both AHI and HDaudio agree that 24 bits is the reasonable limit for now.

And how about sample rate or the “horizontal” resolution?

How rapidly a sound is sampled and played back can also have a BIG impact on sound quality. It all starts with the Nyquist-Shannon sampling theorem or more commonly the Nyquist theorem. It’s pretty simple. As you record an audio signal, you must sample at at least twice the frequency of the highest pitch being recorded. Any sound that is higher than half the sampling frequency will be converted to noise and nasty noise at that.

So how high do we need? It is generally held that human hearing range is from 20 Hz (cycles per second) up to 20000 Hz. So any frequency above 40000 should be great right? Well Yes and No.

One simple problem is that we still must filter out all sound above half the sample frequency, and most frequency dependent volume controls (graphic equalizers) work with gradual slopes. There is no “hard cutoff” at a certain frequency, so we need a bit of headroom.

But there is another reason. As a high frequency sound approaches the Nyquist rate, we are only sampling about once per half-cycle. While this will reproduce the frequency of the original, it will do it at a bare minimum of accuracy. In other words, as frequencies get higher, they get less detail.

At first, I really thought it was all a numbers game, but when developing the driver, I can actually hear the noise decrease noticeably as the playback rates went up!

And that is where I’ll leave off. This was enough of a lesson for one day. I am very happy that I could contribute to the completion of this driver. And the chance to “raise the bar” regarding sound capability was really very nice icing on the cake.

Like many of us, I have been using Amigas for a long time. Today, right here in front of me is an Amiga that supports high definition audio, a modern high performance video card. It uses standard, off the shelf keyboard, mouse, monitor and many USB accessories as well. Most of these we unheard of in the classic days. But with all the new and shiny, it is still AmigaOS to the core.
:)