I'm writing this blog on the eve of my flight to Canada to attend AmiJAM 2013 organised by AMUC in beautiful downtown Calgary. It's many years since I was last in Calgary and, although I've made several visits to AmiWest, this will be my first trip to an Amiga show north of the border. I'm really looking forward to meeting members of the Amiga Users of Calgary and if you are in the area and want to talk Amiga, call in and say hello, but please note I may be a bit jet-lagged!

The other day I received an invitation from Amiga graphics guru, Hans de Ruiter to test out the Oculus Rift VR headset. If you are a regular reader of my blog, you may recall that I subscribed to the Oculus Rift Kickstarter project and purchased several headsets for AmigaOS 4 developers to play around with. Having not had a chance to try our one of these devices I accepted Hans' invitation and drove over to his place which is about 45 minutes away. The Oculus Rift headset is supplied with three pairs of removable lenses to switch the focal distance and possibly enable you to use the headset without glasses if you are near of long-sighted. With the correct lens pair installed it is possible you could use the headset with glasses or contact lenses. However, although I am slightly short sighted, we decided not to change his current lens configuration and calibrated the headset for my use with the pair that was already installed.

Virtual Villa and garden in Tuscany

Although the Oculus Rift headset has generally had rave reviews, people have complained about the relatively low resolution of the developer kit (640×800 per eye producing 1280x800) which  means you can see individual pixels very clearly, and even the black pixel edges. The LCD's response time also causes ghosting/blurring when you spin your head around quickly. As Hans said, this probably wouldn't be noticeable if you were watching a movie, but is noticeable when exploring virtual worlds or playing games. Fortunately, the consumer version should address both of these issues. However, as Hans reported, the response time to head movement is definitely good, so it does feel like you're looking around a virtual world when you rotate your head. The manufacturers recommend that, at first, you use the headset for short periods to build up your "resistance" to motion sickness. Hans admitted to me that he can now use the device for 15 minutes without feeling any nausea, so it was with some trepidation that I tested the device as I have a low tolerance to motion sickness. 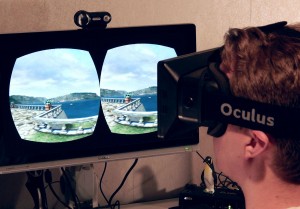 For me at least, the low resolution pixels were not a distraction as I used a combination of joystick and head movement to walk around the virtual world demo of a Villa and garden in Tuscany . It was very impressive, complete with birds, floating blossom and blue MorphOS butterflies. You can walk up stairs, look over balconies and even down down over the edge of the cliff to the beach and shoreline far below.  However, after about 10 minutes exploring the the virtual world my "virtual headache was real enough. Despite, this I was really impressed with what has been achieved so far. Will this latest attempt to bring Virtual Reality to the masses be a success? Only time will tell.

Out of curiosity, Hans plugged the Oculus Rift into one of the USB ports on his  AmigaONE-X1000. The USB stack reported that it was a "Tracker DK" made by "Oculus VR, Inc which as Hans said, is nothing remarkable but still reassuring nevertheless.

Incidentally on the drive over to meet Hans I passed a street sign for West Chester! Now how's that for a virtual reality coincidence? 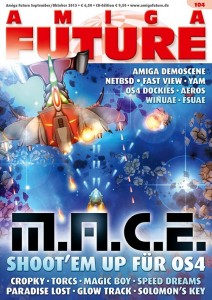 I have just completed another edition of my Classic Reflections series for Amiga Future magazine. Well that's actually not true, I completed Part 1 of Whatever happened to Great Valley Products? Part 2 will have to wait until I return from Canada. Although I knew GVP as a manufacturer of quality SCSI hard disk cards and RAM boards I had not quite appreciated just how productive this company had been during the Amiga's heyday. I was approaching my usual 30K characters limit when I realised that unless I split the edition into two parts I would not be able to do justice to the contribution made by this active and dynamic company who, in 1993, was ranked at number 155 in Inc Magazines top 500 fastest growing privately held companies in the USA.  Look out for Part 1 of Whatever happened to Great Valley Products? in issue 105 of Amiga Future. In the meantime pick up a copy of issue 104 and read about the new M.A.C.E. game and find out "What really happened to MacroSystem?"

Following the news that Big Brother really is watching us it seems that the New Zealand government is keen to join the ranks? Despite a lot of protest and dissension from the general public, parliament has narrowly passed new legislation, by a vote of 61 to 59, that gives the GCSB, New Zealand’s version of the NSA, extra surveillance powers to assist the police, Defence Force and the Security Intelligence Service.

Opponents to the new law claim that the new powers will open the door to the NSA-style monitoring of New Zealand citizens and sounds the death knell for privacy rights in New Zealand. According to a recent poll carried out by Fairfax Media-Ipsos three quarters of New Zealand’s population is “concerned by the law.” One New Zealand resident who is is perhaps more concerned that others is Megauploads founder Kim Dotcom, who is currently fighting extradition to the USA to face charges of alleged criminal copyright infringements, racketeering and money laundering related to the cyberlocker site. Dotcom has been a vocal critic of the new bill and tweeted his condemnation when the legislation was passed. Now there's a surprise! In the latest twist in the saga, Dotcom has stated he is considering forming a new political party which he promises would bring New Zealanders a new submarine cable, fair Internet pricing and no more data caps.

Recently I celebrated one of those "special" birthdays and received a customised card through the post from an Amiga well wisher. It's a good job the number of candles and "Boing Balls" did not match my actual age. Apart from being a fire hazard it would be a bit like the famous (mis) quote from one of my favourite Scifi books and films, "My God—it's full of Boing Balls!" (With apologies to Arthur C. Clarke