The Amiga 4000T. Produced in very small numbers in the last few months of Commodore in 1994 before it went bankrupt, and briefly again by Amiga Technologies in 1996. I thought since I had the system opened up to fix an issue with the hard disk and sound output, I would share some photos of this heavily upgraded machine. 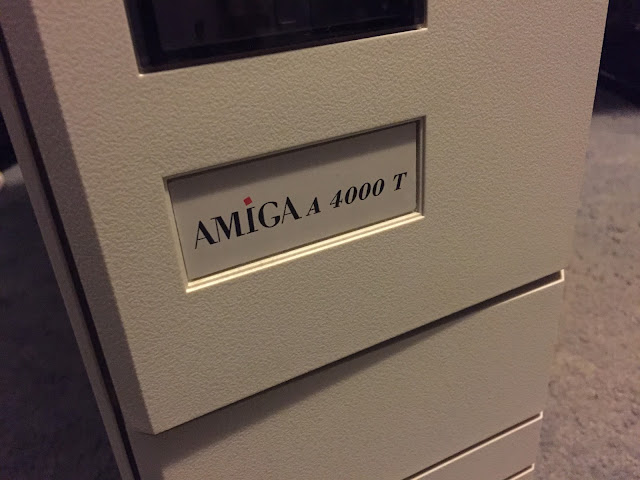 This A4000T (PAL Version) was purchased about ten years ago second hand, base setup with no expansions in it. I had to sell a lot of other systems to have the money to get this one, even back then they were pricey!

It is the later Amiga Technologies built version. The dent in the top back was done during shipping the computer to me in Adelaide. I found a big dent in the box on that corner and sure enough...oh well, can't exactly get a new one.. 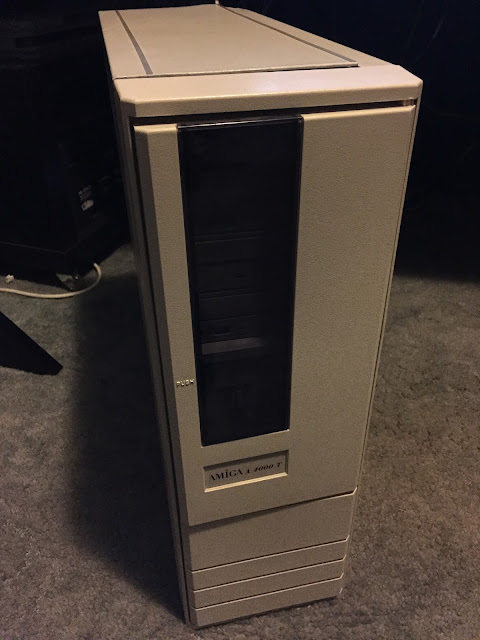 Opening the front cover, I have a DVDROM IDE drive, and 2 SCSI CDROM drives, and just the one high density floppy disk drive, as the IDE hard disk occupies the other blanked slot - it means all the bays are full: 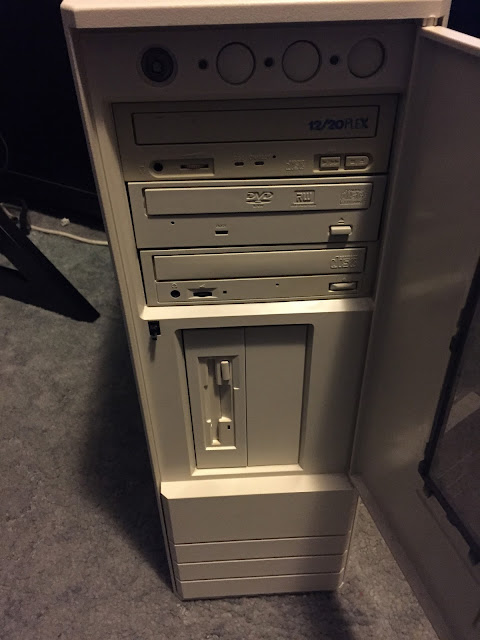 Rear view of the A4000T - the case is big, bulky and heavy. A typical PC AT high tower case of that era. Not as bad as a A3000T from what I have been told - never owned or tried to lift an A3000T. The back says Made in Taiwan and the label says Made in the USA... 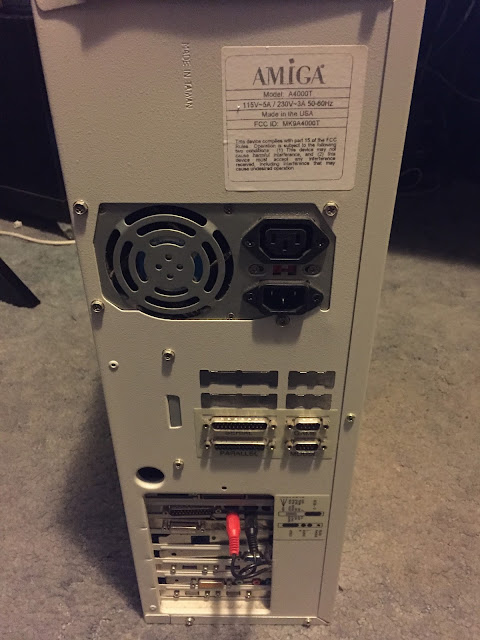 The A4000T uses multiple module cards for all the I/O ports, rather than being included on the main motherboard, as they are on other Amiga's. In the next shot you can see the SCSI external connector (with DIP switches for the SCSI settings so you don't need to open the case to adjust them).

Below that is the Indivision AGA MK2 DVI out (for native Amiga output graphics), Audio/Video module card with RGB port (not used) native Amiga RCA audio out - which is fed back into the case to be mixed via AUX IN into the PCI sound card output. The PCI sound card has a DSP that can decode MP3's in hardware, meaning the 060 is not needed to playback MP3's! :-)

Moving on is the PCI 10/100 network card, 3dfx Voodoo3 PCI graphics Card (which runs the Workbench screen), and the first of the USB ports connected to the Deneb USB card internally. 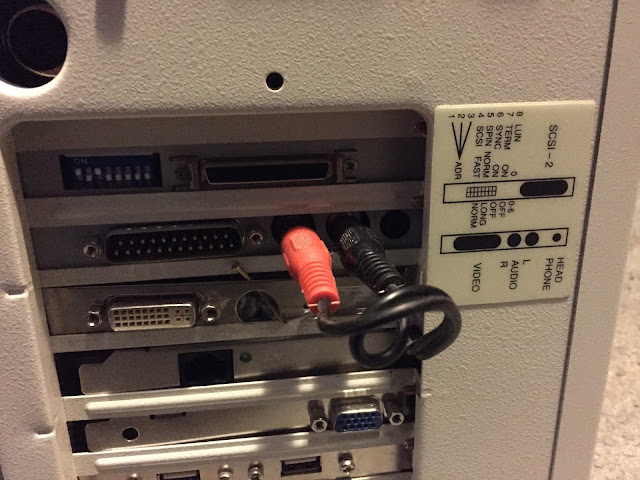 Some of the cards are offset because of the PCI bridge board which means the PCI cards are higher than normal...

Because the A4000T has IDE and SCSI support, technically a separate SCSI card or IDE card is not needed.

However, I did add a Buddha IDE Zorro card as I wanted buffered IDE ports to minimise potential damage to the hard disk and provide more IDE ports.

Also installed in the case is a USB Deneb Zorro card (including OS3.9 patches in ROM for one boot to bootup), and a IDE 320GB Hard disk (running SFS partitions).

Opening the case reveals a labyrinth of cables - the SCSI cable is stretched to it's limit to reach both CDROM drives, positioned over the Cyberstorm 060 accelerator with 64MB memory. I have 128MB in my A4000D Cyberstorm 060 card but I never needed to transfer it to this machine so far... 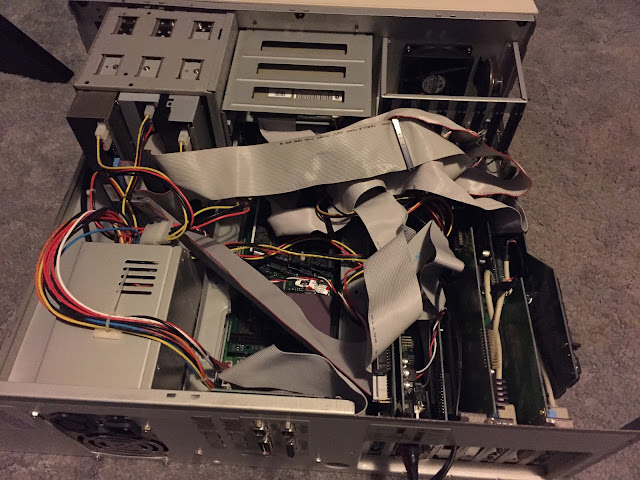 View from the bottom shows the Mediator PCI A4000T bridge board which adds many PCI slots to the Amiga 4000T whilst still allowing most Zorro slots to be used as normal (zorro riser is needed in some cases depending on what cards you have) - you can also see the PCI sound card and 3dfx card in this shot: 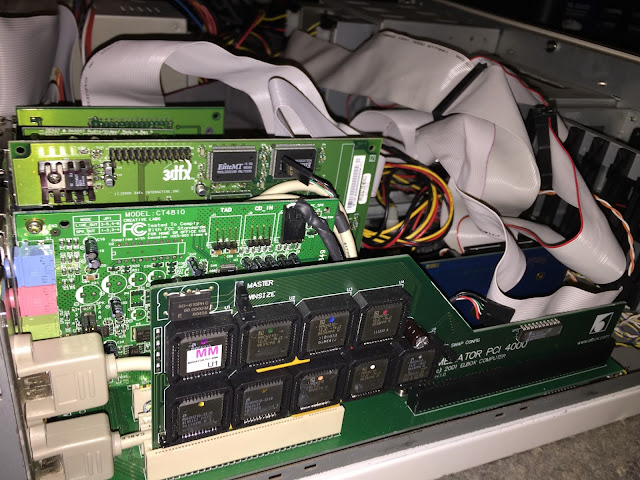 I was pleased that after just reseating everything inside the A4000T, the machine worked as normal again and the issues I was having with the hard disk booting and sound output just went away! I was very happy it wasn't more complicated! 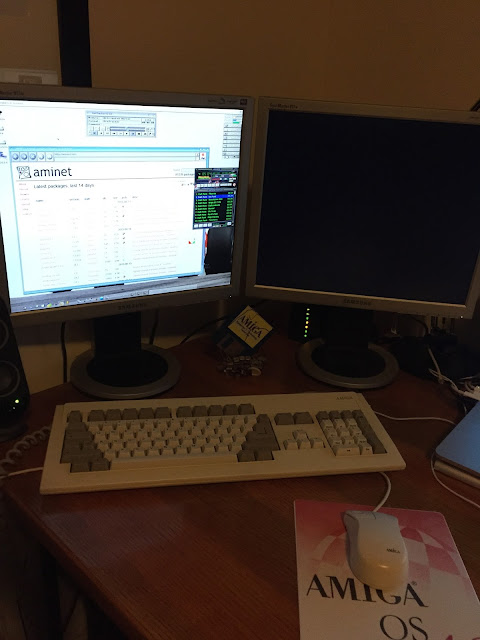 One TFT display is to show the 1280x1024 resolution 24 bit colour Workbench, and the other TFT screen to output the scan doubled Indivision AGA native Amiga graphics for WHDLoad games and of course the many Amiga demos I have 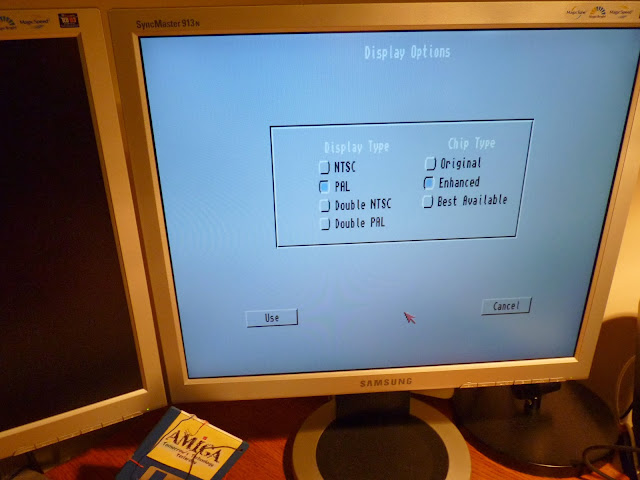 Never did understand why they chose "Best Available" instead of putting AGA under the Chip type in the Early startup menu Display options...anyway! 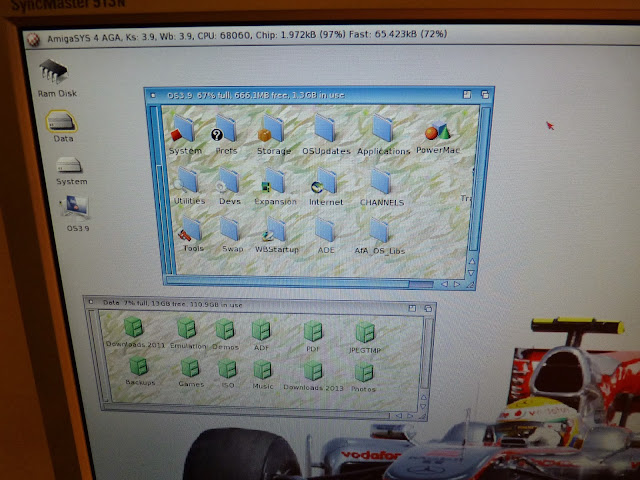 I used to have the PicassoIV in this system (which passes through Amiga native graphics output scan doubled plus it's modes via one VGA connector) so only one screen was needed, but having the 3dfx Voodoo3 PCI gives me higher resolutions in more colours.

It allows me to run AFA for AOS too which gives me anti-aliased fonts on the Workbench, a lovely AmigaOS4 theme, and png icon support too! :-)