My Commodore 64 has arrived with SD2IEC and Chameleon64!

I received my Commodore 64 this week! I am keen to try out SD2IEC and Chameleon 64 on it! This is not strictly Commodore Amiga related, but it is Commodore related so it is close! Please forgive me - my regular Amiga posts will be restored after this one I promise! 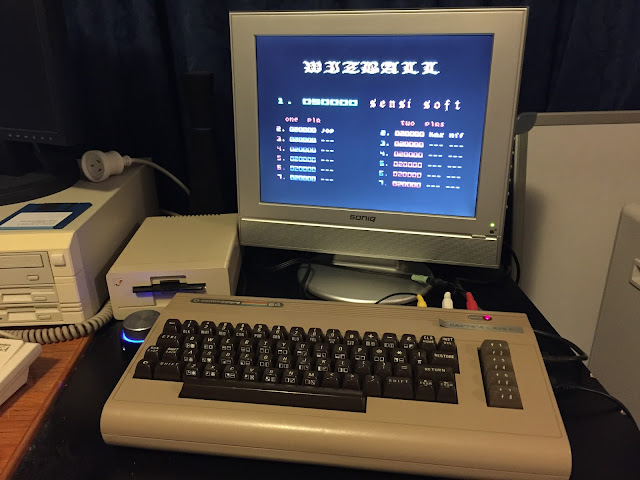 But I got the itch to play with a C64 again after seeing some of the games and demos recently released in 2015 for it! So one eBay auction later and here it is!

This is the breadbox version of the Commodore 64, and as you can see it is in good condition with no yellowing to speak of: 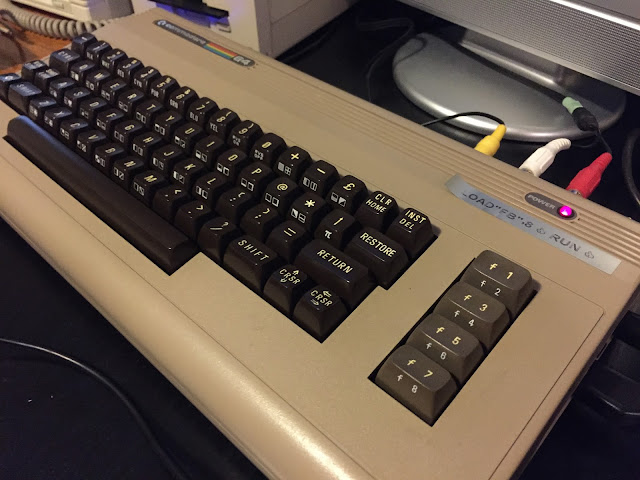 This C64 also has a sd2iec add on installed inside the C64, which also allows loading C64 disks from SD card - and the previous owner has made a small slot for the SD Card on the left side of the case to allow easy transfer of additional image files to the C64 as new demos and games are released. 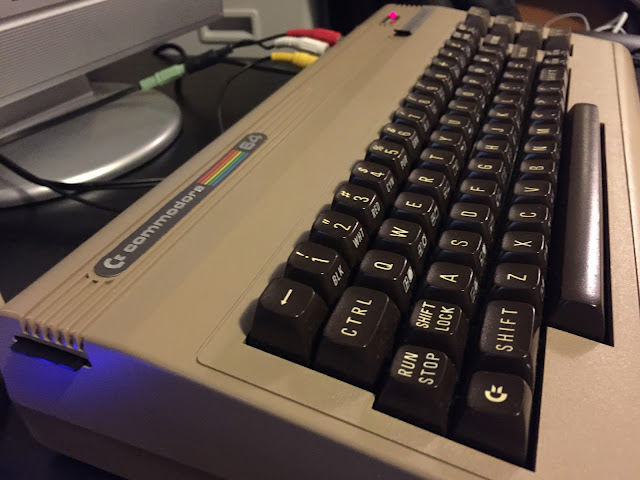 The other modification made to this C64 is a AV out conversion. Normally the C64 has RF out only, which is annoying to setup on a TV these days. With this AV out conversion there are new ports on the rear of the case for standard S-Video, RCA video out, and left/right RCA audio out cables to be connected to a modern TV. 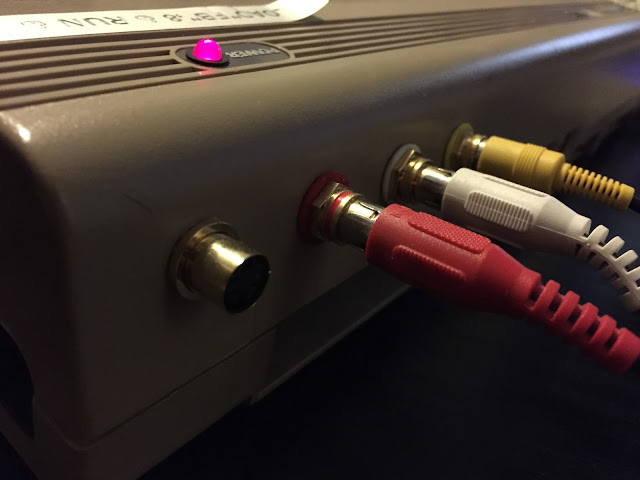 I had some issues with the power supply when I first got it - it wouldn't power on at all. I traced the problem to a blown fuse in the power supply. Once swapped for a new one, the C64 was ready to go!

Initially I tried out the sd2iec built in sd card loader, by typing in load "FB",8 and typing Run. It then loads a menu of games to choose from, reading from the contents of the SD card inserted into the side of the C64. 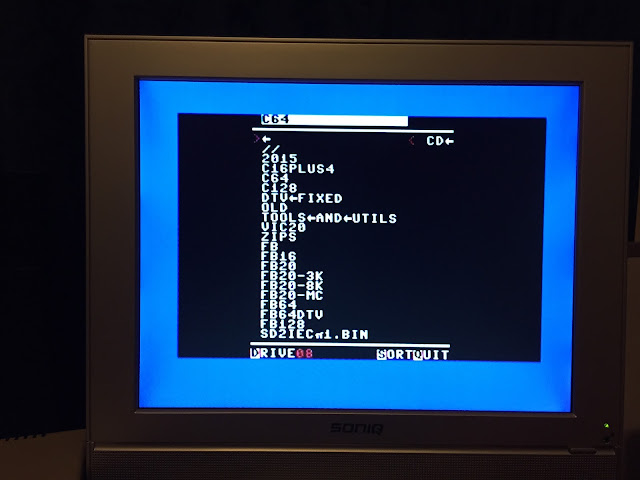 I choose Wizball, and here it is running: 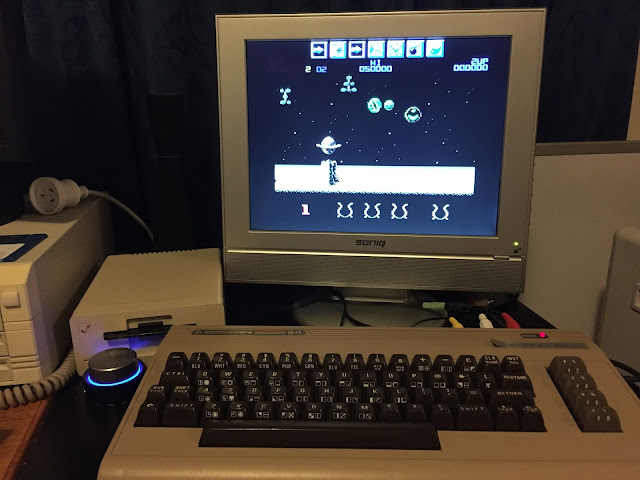 But, the sd2iec is limited in some ways, and loading times are the same as for normal floppy disks unless you have a Fast Load cartridge installed as well (which I don't have). On the positive side it is more compatible with disk images as a result.

What I do have also though is a Chameleon 64 Cartridge. This cartridge can operate as a C64 re-implemented in FPGA on it's own - no C64 needed. This is how I have used it until now. It can even run other cores to be a complete Vic 20, Atari 2600, Atari 800XL, Amiga, and other computers too!

But it can also be plugged into the real C64 cartridge port and open up new functionality, such as being able to load tape, cartridge and floppy disk images as fast as possible from a SD card. 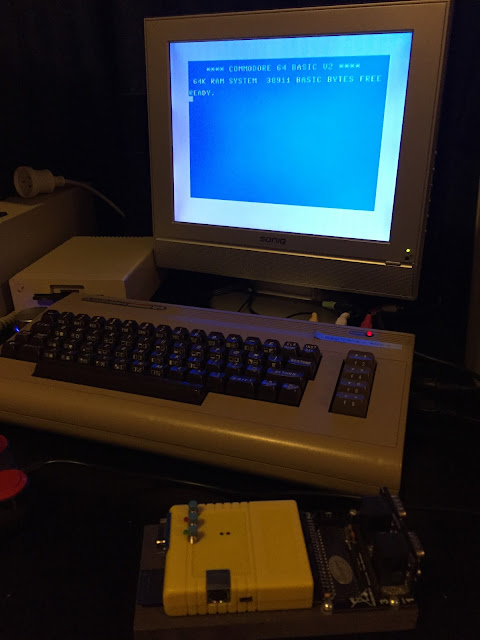 The Chameleon 64 also supports internally a Retro Replay network card expansion (which I have already and plan to add into it soon) that with a new operating system called Contiki allows the C64 to be on the network, have internet access and act as a web server like this one! Never tried it and very keen to do so soon!

After installing the cartridge and turning on, it quickly boots into the familiar Chameleon 64 menu to choose cores or browse C64 disk/tape/cartridge images to load up, but now running through the C64 display rather than it's own VGA out port: 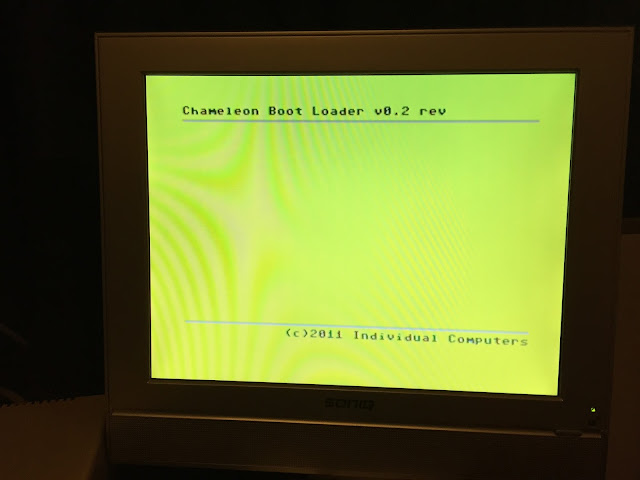 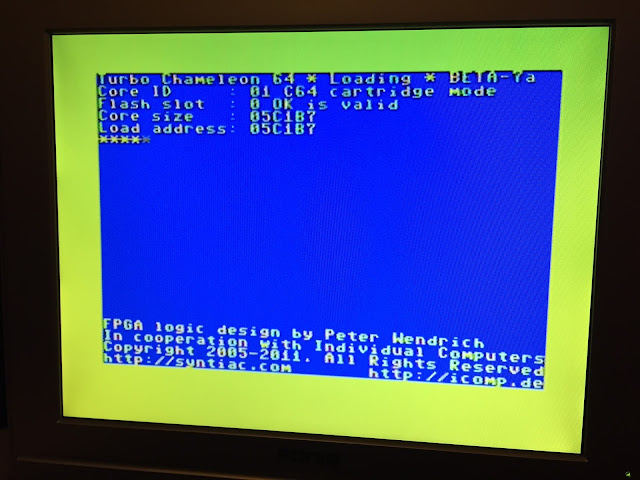 And yes, I know there is a newer Core Beta 9 released this month I can load onto it - I plan to do it soon but wanted to make sure the existing setup worked first. 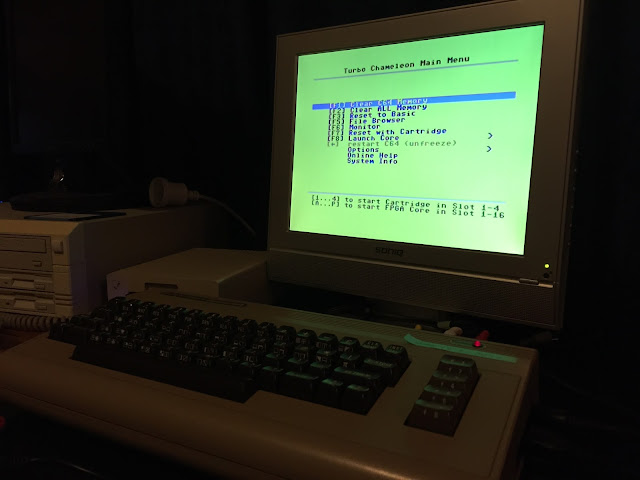 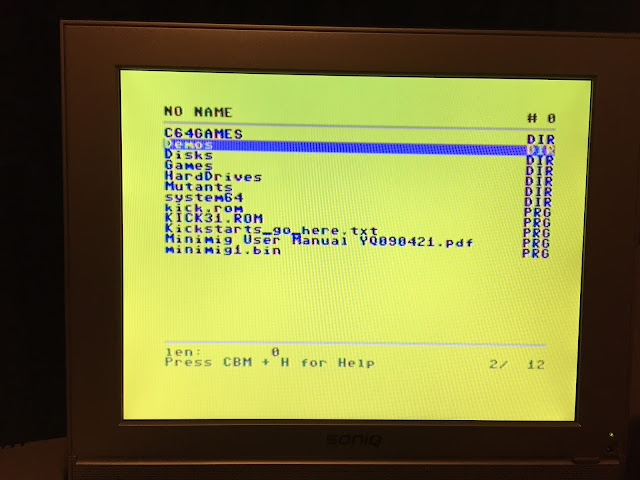 Shot of the Chameleon 64 plugged into my C64: 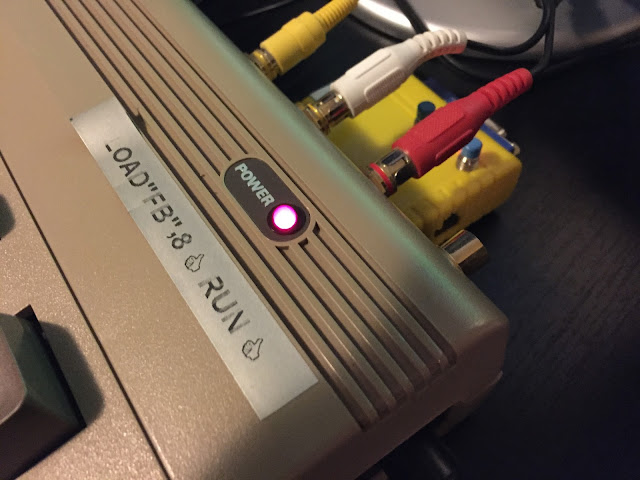 This shot shows the Chameleon 64 and also the AV ports a bit better. 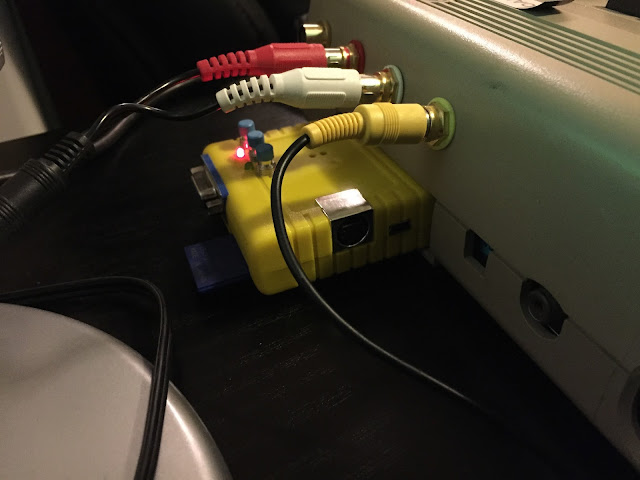 Games it is - and Mutants is the game to try out via the Chameleon64 - it loads really fast! 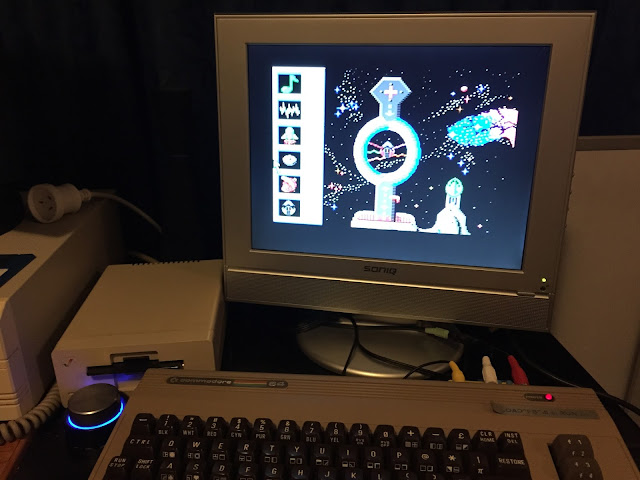 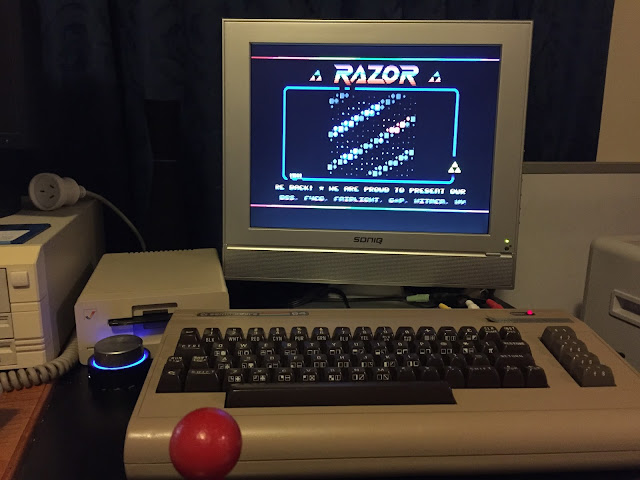 And another demo - Pimp My Bento, by Noop, released recently at Assembly 2015: 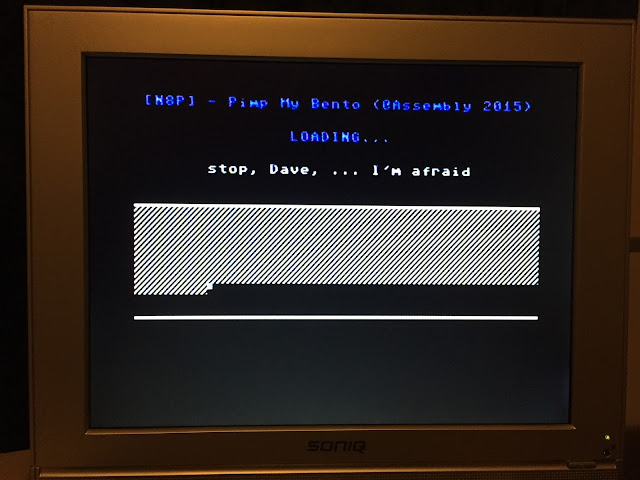 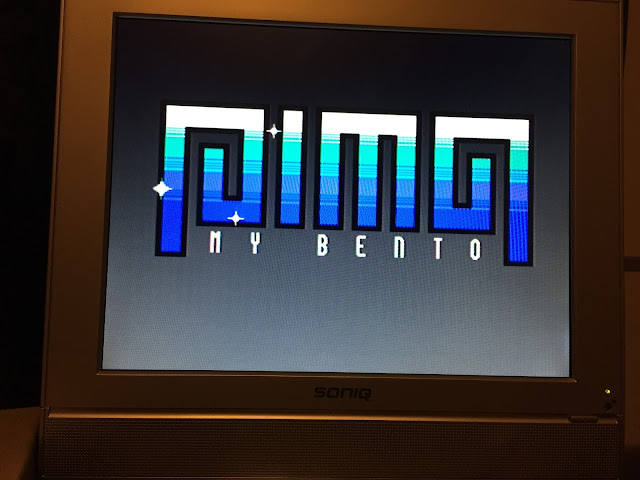 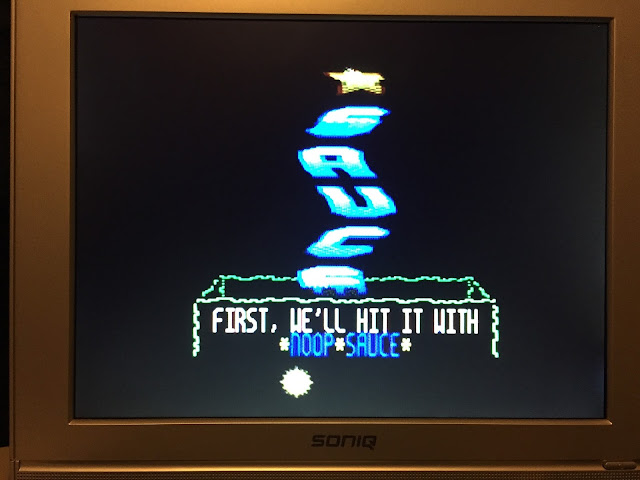 I am very glad to have this C64, and with the modern SD2IEC and Chameleon 64 hardware with AV out it is legacy free and wait-free! I can enjoy the C64 again in 2015!