The loss of my friend Mark

Last night (September 29) a close friend of mine, Mark Thompson passed away. He is known in the Amiga scene by his demo scene handle Axon of The Experience, a Classic Amiga demo group I formed in the late 1990's in Adelaide during our university days. We wrote 2 AGA demos and Mark wrote another separate intro in Assembler for Amiga 1200/030 systems.

Every week we would have coding sessions in his dorm room on our Amiga 1200's, with some of our Amiga owning friends at Uni also involved in the demo group at that time. We would always have too much drinks and fish & chips from the Blue & White cafe in North Adelaide after a heavy night coding...we attended the Coven demo parties at Adelaide Uni for a few years in 1995/1996/1997.

Together we wrote a hurried demo for Coven 1997 (Adelaide demo party) called "TLA" (which couldn't be included in the compo because it was PC only!) and also another demo called "Terminal" for Remedy 1998 where it finished 4th. It was a lot of fun.  Mark not only did the coding but also some graphics work on the Amiga too, like making 3D objects and even the TLA logo below. 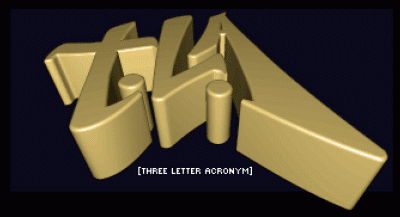 We all had (and still have) huge respect for the Amiga demo groups who produced and continue to produce amazing demos for Amiga even today.

We knew we had no hope of emulating that but we tried anyway, and thanks to Mark's amazing coding skills in Assembler we produced the demo called "Terminal" in 1998 which I am still very proud of working on. I still have all the source code to the two demos, not that I can do anything with them nowadays.

The demos, some music and source code for TLA are still available on Aminet today from when we uploaded them all those years ago if you are interested to try them out.

Mark originally had the handle Raven, but then found out someone else had it already, so he changed it to Axiom (until he found out that was taken too!) and then finally settled on Axon.

A YouTube link I put up with the Terminal demo is here:

Traksion (who produced the main title song for Terminal and some pixel art, I did the design, some graphics and intro music, Mesh did most of the other great graphics) ran the demo at the latest Adelaide Amiga user group meeting on the Amiga 4000T in early September 2015.

I was very proud we could show Mark's coding skills to an Amiga audience once again!

He was a very talented programmer, first on Amiga and then in the PC world. He was a great guy and a great friend to me over the years. Last night he passed away from terminal brain cancer, leaving behind his wife and his young son. I offer my sincere condolences to them and their families at this time. I will miss him.