RF to VGA out conversion on Amiga 600

Today I am looking at the conversion of the RF port on the Amiga 600 to a VGA out port, from the Indivision ECS! 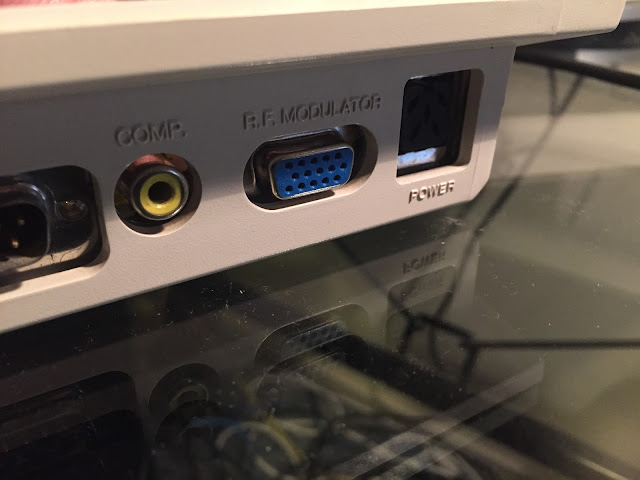 First off though, I wanted to mention that today, four years ago, I started this blog! Hard to believe it has been 4 years and I am still regularly blogging about all things Amiga, Classic and Next Generation systems!

Thank you for reading along so far, and I hope you have enjoyed the blog posts and that they have inspired you in some way to continue to enjoy your Amiga systems in 2016 and beyond!

For those who have followed my blog closely you will know that my Amiga 600 was bought second hand in 2014, completely stock standard, and extensively upgraded since then.

I have covered every step of the Amiga 600 build process on this blog, including all the hardware upgrades, installing the system on CF card, and more too.

I have included the blog post links to this Amiga 600's story so far below in case you want to follow it's journey from the start - it also saves me having to explain all the upgrades the system already has! 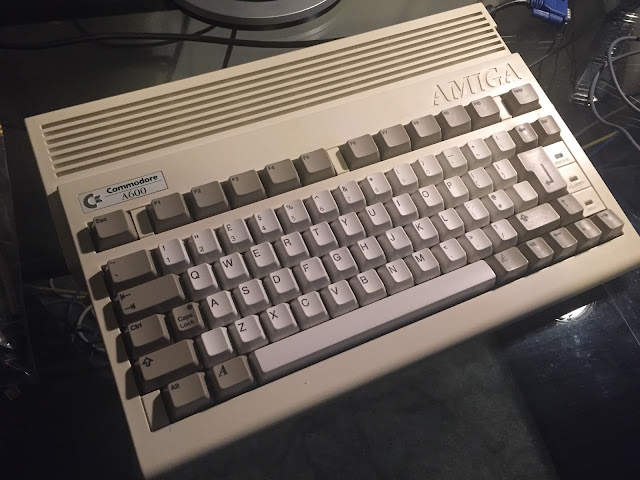 A quick update also on my non-working primary AmigaOne X1000 from back in March 2016 (I currently use my backup X1000 system). Two weeks ago I was told to send it back to Amigakit and so I sent it back to them in the UK to work out what the problem is and the next steps. Hopefully it can be easily sorted out so I can use it again.

Today's job though is to fix an annoying problem with the Amiga 600.

The Indivision ECS works great on the Amiga 600, but there is nowhere for the VGA out port to be mounted, other than drilling a hole in the case which I don't feel comfortable or capable of doing...

The other solution comes in the form of other people's A600 upgrades I found on the internet, which involve desoldering the RF modulator from the Amiga 600 motherboard, and replacing it with the VGA out port from the Indivision ECS, which apparently fits perfectly in the A600's RF out port hole at the back. 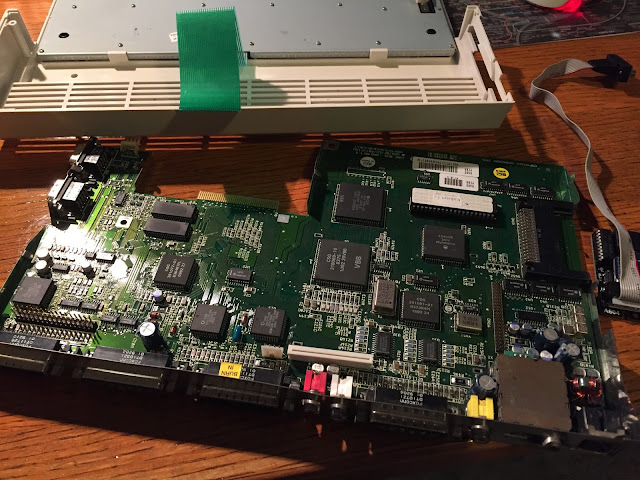 The RF modulator is rarely used since the AV out is more common and much easier to setup on modern TV's - losing it is not a problem for me at all.

The problem is - well - I suck at soldering. So this project has sat on the back burner until this week, when a friend Aron, a regular attendee at the Adelaide Amiga Retro Computing group, offered to do it for me at the meeting on Friday night! Thanks so much for doing this mate!

I needed to completely remove the A600 motherboard from the case, including the metal protective shield to make it easy to work on during a busy meeting for me as one of the organisers! I got this done in time fortunately.

Here is Aron ready to start work on my A600 board at the Adelaide Retro Computing meeting on friday night. 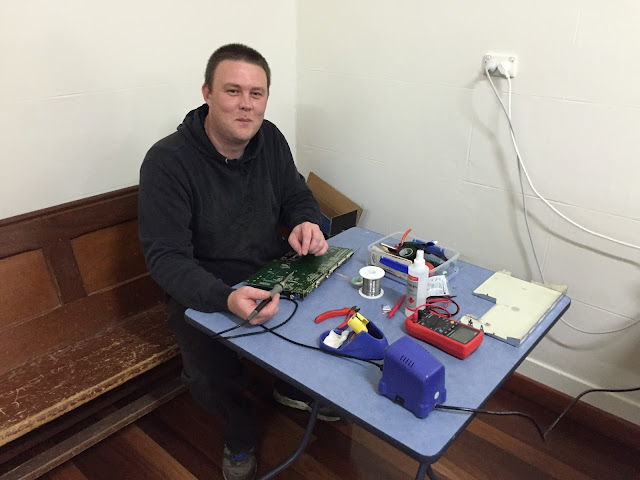 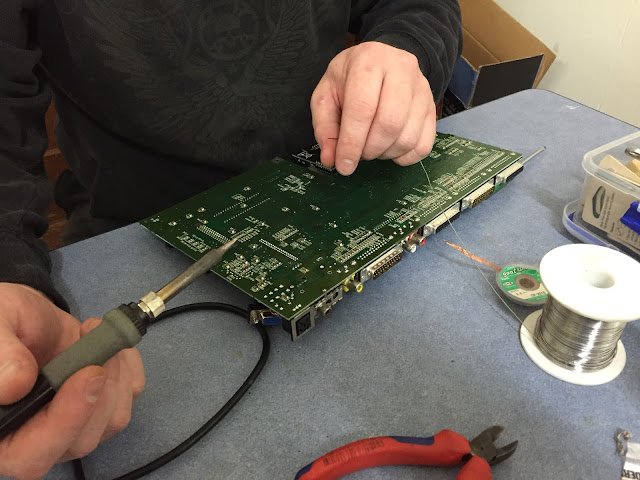 After some work the RF modulator is slowly being removed carefully to avoid any damage to traces on the board: 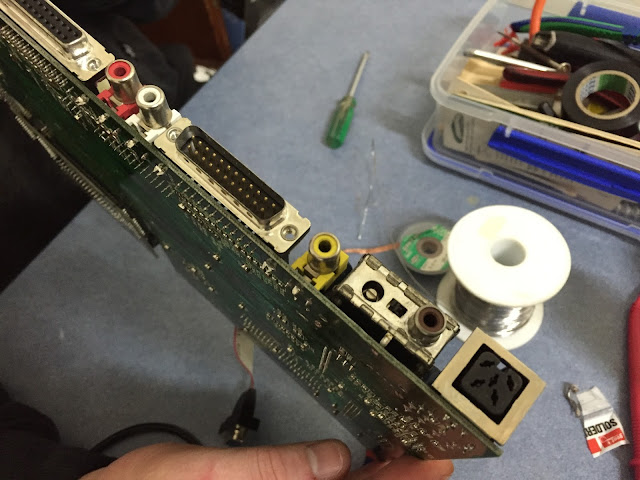 The RF modulator has now been desoldered off the A600 board thanks to Aron's skilful work: 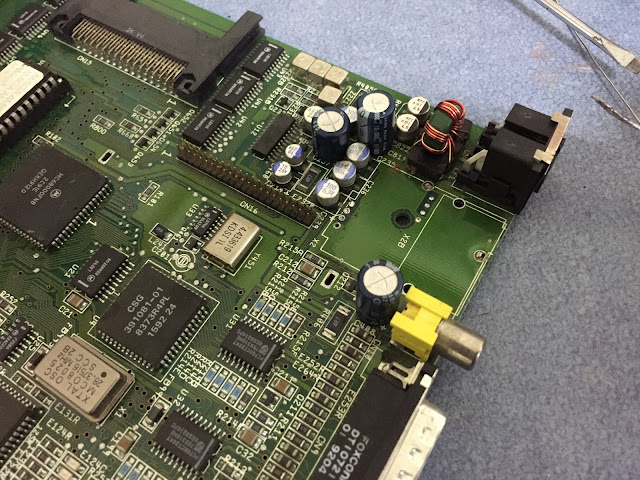 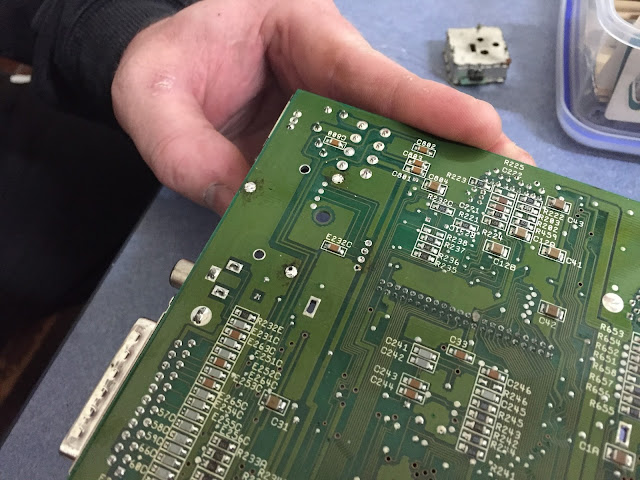 Here is the old RF modulator: 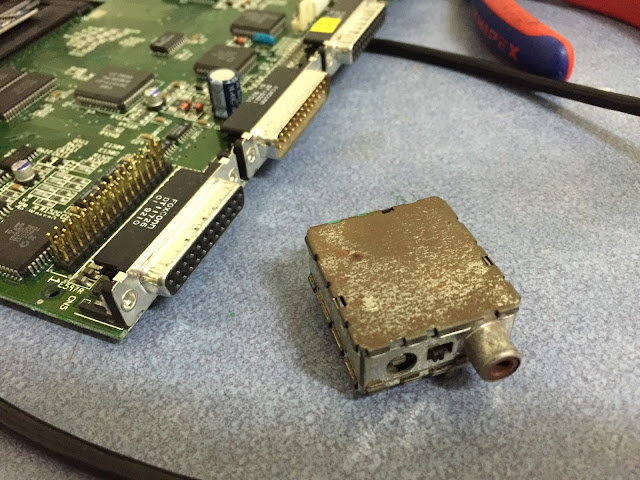 With that done, I now have the space needed for the VGA port from the Indivision ECS card to go into it's place. 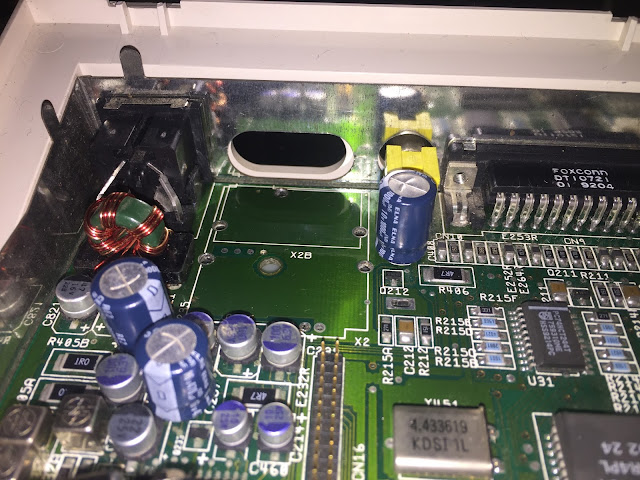 Once I got the board home after the meeting, I could then get started on this task on the weekend (after doing my blog entry for the Meeting of course!).

The screws on the VGA port create a problem because they are too wide to fit into the RF modulator slot on the back of the case, as below: 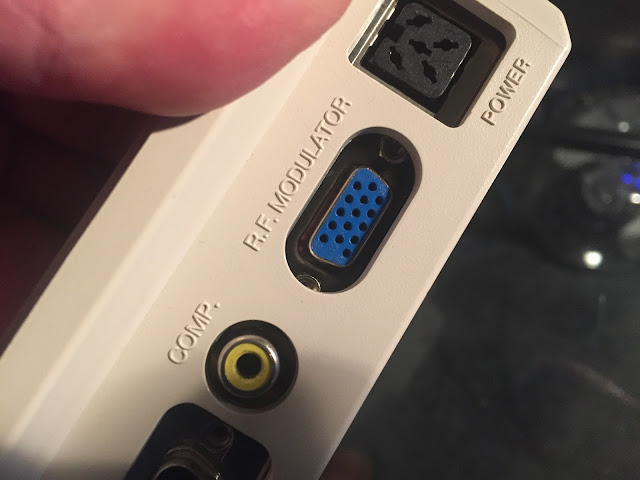 If I remove the screws then it fits fine as below, but it needs to be secured otherwise it will push into the case everytime a VGA cable is connected:

So I located some flat screws to use to secure the VGA port to the metal shielding, making it safe to use and fitting in the case (I hope!): 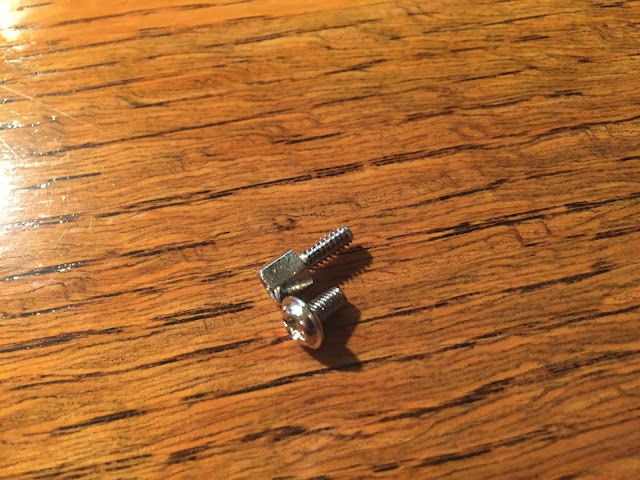 Here is the VGA port before and after securing it with the new screws in place of the normal ones on the VGA port: 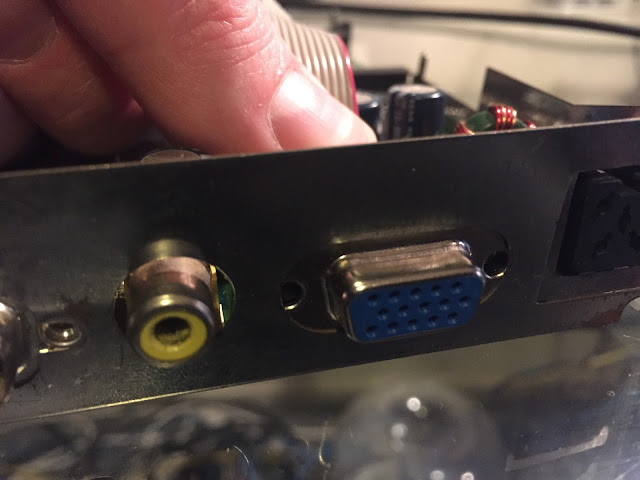 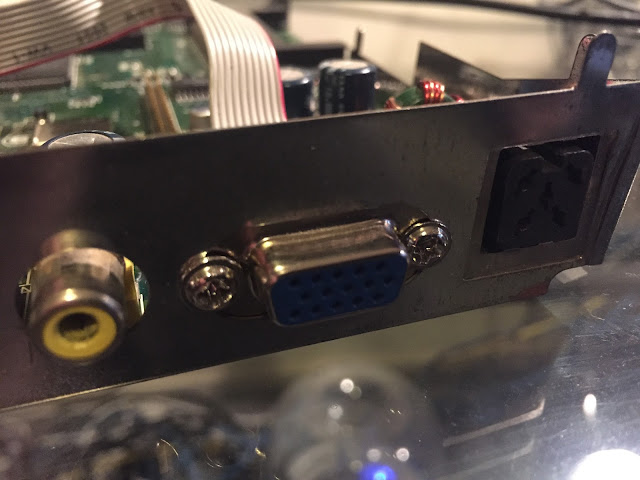 I then needed to put back in all the other screws into the metal shielding for the other amiga ports on the back of the board: 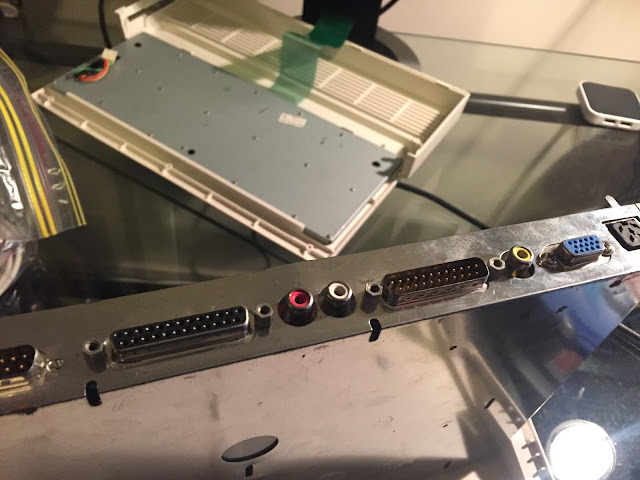 I then put the board into the case to check for fit, and it fits perfectly: 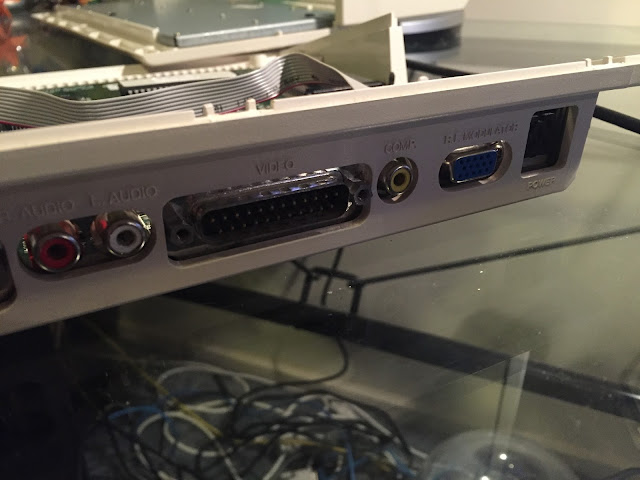 The motherboard lines up with the screws on the case so we are good to go with this! :-) 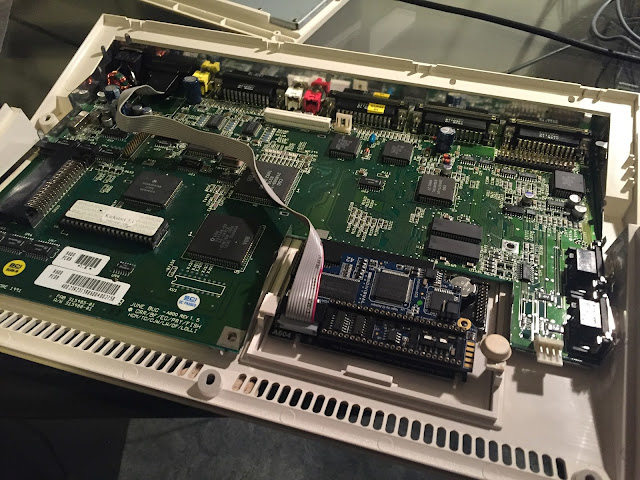 I then set to work putting the various hardware upgrades I have on the Amiga 600 back into it: 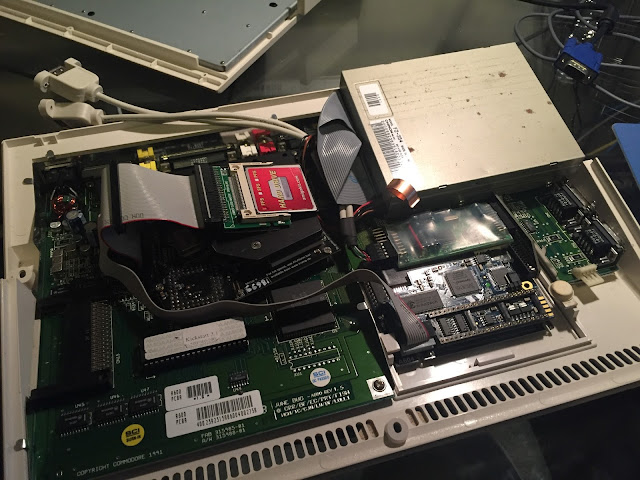 I make sure to route the Indivision VGA cable around the ACA630 accelerator as that accelerator does get hot when running. 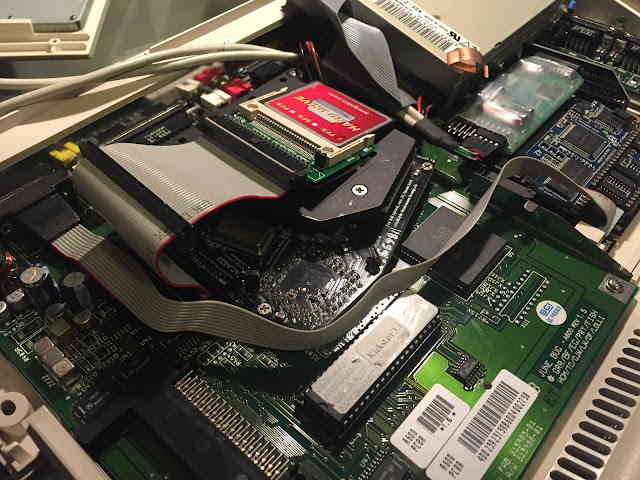 Re-assembled, I decide to re-use my USB hub from the X1000 and just have one usb cable coming out between the top part and bottom part of the A600. I still need to find a solution to the USB ports too, but this task is for another day! 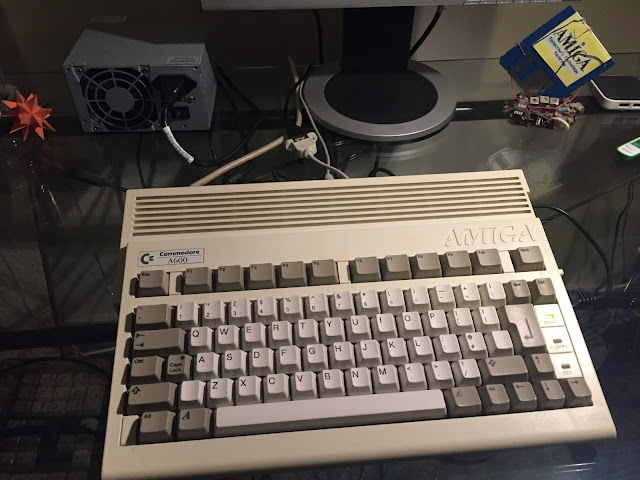 Here is the view from the rear of the assembled Amiga 600, showing the VGA cable connected into the former RF modulator port, as well as the MAS Player connected into the parallel port and RCA audio outputs (and the joystick port) to provide MP3 output using hardware on my Amiga 600. 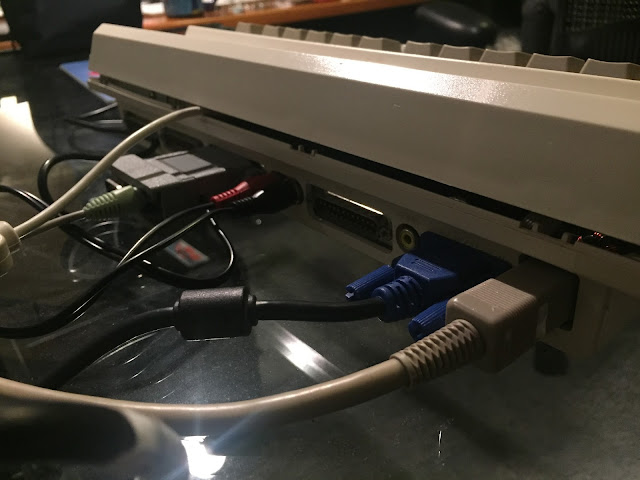 I also took the opportunity to bring out my spare Amiga mouse (brand new, never used) since I couldn't find the old one easily and came across this first when looking for it :-) 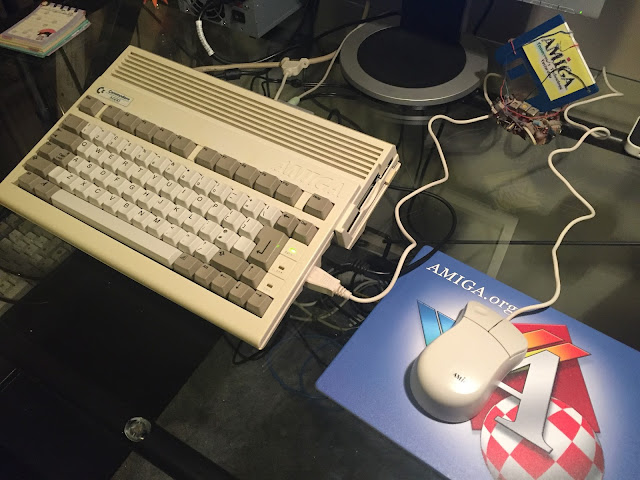 Power on and it's still working after the desoldering work which is fantastic news! 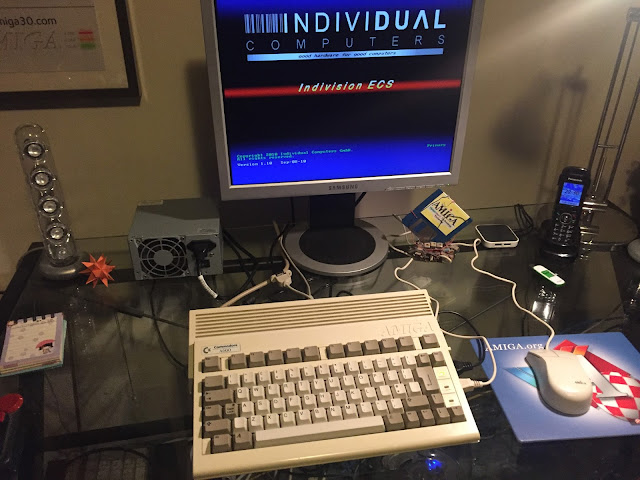 Here is the Amiga 600 booted up on Workbench 3.1 using MagicWB 2, AmigaAMP playing MP3's with no significant cpu overhead with the MAS Player attached to the parallel port, and DOpus 5.91 (amongst many other things that are covered in my previous blog entries - please check the links at the top of this post if interested to learn more about this A600 build): 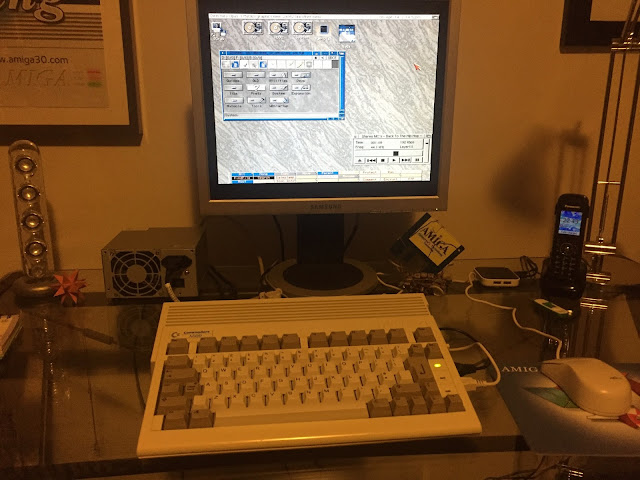 Success! I now have a VGA out port on my Amiga 600 installed using the unused RF modulator port and I am very happy about it. Now, next to work out the USB ports...
Read more