Happy New Year from the land of the long white cloud

As we are about to celebrate the start of a new year I thought I would quickly reflect on some of my experiences over the past 12 months. In many respects 2016 has been an excellent year for the Amiga community with the one exception being the sad passing of Dave Needle, one of the key members of the original Amiga development team, who died in March. Dave is joined by a whole host of international celebrities who unfortunately also passed away this year. This included Pat Clark who was my first real boss in my first real job. Pat may have not been an international celebrity but he had a profound influence on my early working life and I am equally saddened by his passing. R.I.P. Dave and Pat.

However it was not all bad news and I've listed a few of my personal Amiga highlights and other notable events in 2016.. 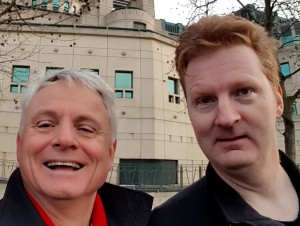 I flew from the warm New Zealand Summer to the winter chills of Durham City in the NE England to attend to some personal business. 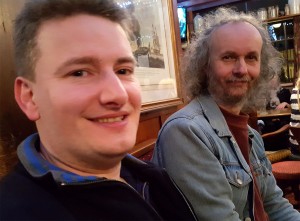 On my way back through a slightly warmer London I met up with Matthew Leaman and some fellow Amiga Developers & beta testers, Darren Stevens and Andy Broad.

Continuing with the Linux theme, Luigi Burdo, one our beta testers and active Linux expert, demonstrated the power of his AmigaOne X5000 by "testing" the performance of bump mapping, normal mapping, and specular highlighting under Linux. Of course you know that means he was playing Doom 3.

Unfortunately Dave Needle passed away this month. I had the privilege of attending his memorial service in Alameda, California along with many of the original Amiga development team and fellow Amiga enthusiasts who came along to show their last respects. 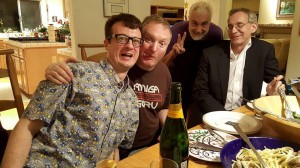 RJ Mical and his wife Caryn graciously provided me with accommodation and we celebrated Dave's life into the early hours of the morning with Glenn Keller, Adam Spring and Chris Collins.

While I was in San Francisco, Adam Spring took me on a visit to see Greg Dykstra of Pixar fame. Adam was seeking Greg's advice on some technical issue related to 3D scanning and digital sculpturing and somehow I managed to gatecrash the meeting. A-EON Technology announced that Warp3D Nova, a native 3D Shader-based API which offered exciting advancements in 3D software for the AmigaOS4 platform was being developed by graphics guru and AmigaDeveloper.com team member Hans De Ruiter. To complement Warp3D Nova, we engaged Daniel Müßener of Cherry Darling fame, to create an OpenGLES 2 wrapper. Both Warp3D Nova and OpenGLES 2 have been regularly updated throughout 2016.

On the Linux front, Christian Zigotzky, one of the very active members of our Core Linux team, travelled to Cardiff to help set up the Linux installation for the Tabor motherboard.  This is made available to our Tabor/A1222 beta testers who wanted to test Linux on their board while they wait for the AmigaOS 4.1 port from Hyperion Entertainment.

I again travelled to the UK to attend the first ever A-EON Technology Linux Devcon in Cardiff, Wales. Several members of our Core Linux team travelled from overseas to attend the conference. The group included Pat Wall from Kilkenny in Southern Ireland, Alex Perez from San Francisco, California. Darren Stevens journey from Scarborough in Northern England was just a little shorter and of course Matthew lives in Cardiff.

We also had the part-time Skype presence of Adrian Glaubitz, a Debian developer who is working on the official powerpcspe Debian Sid build for the Tabor motherboard. While in the UK I took the opportunity of visiting Ultra Varisys, A-EON's hardware development partners and even managed to squeeze in a meeting with David Plesance, the former Joint Managing Director of Commodore UK and now involved with FriendUp. I accompanied him on a meeting to Jagex's headquarters in Cambridge and he introduced me to Rod Cousens, Jagex's CEO and ex head of Activision, who he knew from their Commodore/Activision days.

A-EON announced v1.0 of Enhancer Software for AmigaOS 4.1 was available on AMIStore as a digital download. After an awful lot of work the first startup of LibreOffice on AmigaOS4.1. OK it was sluggish and barely usable but it was a major breakthrough nevertheless. The LibreOffice code base is truly massive.

A-EON acquired the exclusive ownership of the RadeonHD source and binary code for AmigaOS 4.x.together with all existing and future RadeonHD intellectual property rights from developer Hans de Ruiter. Meanwhile Hans continued to work on the Warp3D Nova development for A-EON.

It just had to be!

I can't let this month go by without mentioning my 40th Wedding Anniversary. Who would believe it, firstly that I'm that old and secondly I got married before the Amiga was even a twinkle in Jay Miner's eye!

and what do you think I spotted on my short weekend trip up to Russel in New Zealand's beautiful Bay of Island area?

A-EON released the first major update to the Enhancer Software Pack for AmigaOS 4.1 systems. The v1.1 upgrade included a lot of new content in addition to the customary bug fixes and was available as a free download from AMIStore for registered users. It could also be purchased as digital download from AMIStore or as a boxed CD from selected Amiga dealers. In August I made another short trip to Europe and found some time to meet up with the Hyperion Entertainment team in Brussels, Belgium, on my birthday no less. Who said the 13th was an unlucky number?

While on business in Sydney, I made a side trip to Adelaide in South Australia to give a presentation to the AAUG's (Adelaide Amiga User Group) at the invitation of Epsilon (of Epsilon's Amiga blog fame).

I made a quick dash to the UK to attend the LAG's (Lincolnshire Amiga Group) 10th Anniversary bash in Northern England before travelling to California for my annual visit to Amiwest in Sacramento. I announced the commercial release of the AmigaOne X5000 complete with a pre-release version of AmigaOS 4.1 Final Edition Update 1 supplied by Hyperion Entertainment. I also announced the upcoming release of a special Enhancer Software-SE edition, a special light version for older AmigaOne and compatible models that do not support modern RadeonHD & Rx graphics cards. The imminent release of Prisma Megamix, a multi-format dual interface music card for all 68k Amiga computers fitted with a Zorro II or Clockport, was also announced.My bag was stolen containing my original prototype A.L.I.C.E laptop plus passport & cash etc. Suggestion that the contents of my emails stored on my Laptop had any effect on the US presidential election results have proved unfounded!

Thanks to the initiative of A1222 beta tester Domagoj Ozanic the AmigaOne X5000 and AmigaOne A1222 made the front page news on www.bug.hr the biggest and most famous mainstream computer magazine in Balkan region.

Hyperion Entertainment posted an early development video of the AmigaOS 4.1 Workbench booting on the Tabor motherboard for the first time. Tabor is finally evolving into the AmigaOne A1222.

In the same month New Zealand was hit by a severe 7.8 earthquake which was centered around Hanmer Springs in the North of the South Island. It cause a lot of damage and destruction around the quake's epicenter and even Wellington, where I live, sustained a lot of structural damage. Fortunately, I only sustained relatively minor damage but my G5 iMac is toast. However, there is no truth in the rumour that the two events were related. there is only 1 Amiga

Another update to the Enhancer Software package was released for AmigaOS 4.x PowerPC systems which again included a lot of new features. Version 1.2 now included the SE version for older AmigaOne machines as well as the usual Standard and Plus editions. After all the disruption caused by the quake and numerous strong aftershocks I decide to trade my car in for a newer model. You only live once!

Well that is all I have time for as midnight is fast approaching in New Zealand so all that is left for me to say is: Happy New Year to all Amigans from Summertime in New Zealand