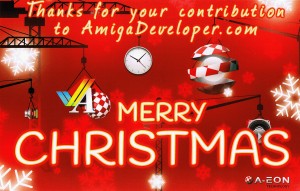 Season's Greeting to all Amigans

At this time of year with mid summer fast approaching in New Zealand my Northern hemisphere imprinted brain has a difficult time coming to terms with warm weather, sunshine and Christmas. Not that Wellington has been particularly seasonal in the past few weeks, with earthquakes, storms and flooding. Still the calendar shows that today is the 25th December in New Zealand so I suppose it's time to say Season's Greeting to all Amigans. The A-EON Technology Christmas card this year is dedicated all the Amiga developers, translators and beta testers who contributed to 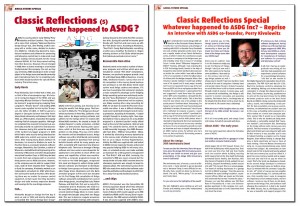 My first Classic Reflections Special interview was with Perry Kivolowitz, the driving force behind ASDG the creator of Art Department and MorphPlus, the forerunner of  Elastic Reality, whom I met at the Amiga 30th Celebrations at the Computer History Museum in Mountain View, California last year. Perry graciously agreed to give me an in-depth interview about his life and Amiga experience, even after reading my article about ASDG. 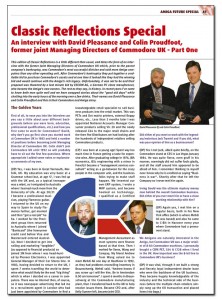 I've just finished another Classic Reflections Special interview with David Pleasance and Colin Proudfoot, the ex-Joint Managing Directors of Commodore UK. Prior to  Commodore's bankruptcy, CBM UK was Commodore's most successful division and sold more Amiga computers than any other operating unit. After the parent company's bankruptcy the two men managed to keep CBM UK trading for another 16 months and even made an attempt to perform a management buyout of the whole Commodore company before being thwarted at the eleventh hour when their Chinese partners changed sides and joined forces with ESCOM who eventually became the Amiga's new owners. There is so much content from the interview that the article is split into two parts which will appear in the next two issues of Amiga Future.

If there are any companies or individuals who you think made a valuable contribution to the Amiga scene whom I've not yet covered in my Classic Reflections series please send an email to me at contact(at)a-eon.com. I can't promise to write about all suggestions but I will certainly take a look. 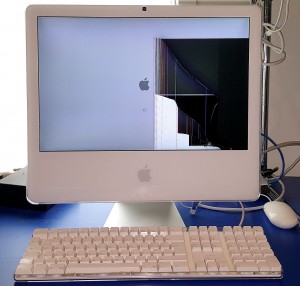 You may have read that New Zealand was struck by a 7.8 magnitude earthquake just after midnight on Monday 14th November. If you are interested you can read about my experience in the upcoming issue of Amiga Future Magazine.

Although I suffered some damage to a Phillips Monitor and a G5 PowerPC iMac other people in Wellington city were hit much harder. A friend of mine sent me some pictures of her apartment which is on the 9th floor of a modern earthquake resistant building. Although the building was not damaged in the quake, the contents of her apartment were another matter. Fortunately the damage was mostly cosmetic and no one was injured in her building which is the main point anyway.

However, spare a thought for the people of Kaikoura, a town on the North-East coast of the South Island which is very close to the quake's epicenter and suffered serious damage and some fatalities and was cut off by land slips to the north and south. At least the frequency and strength of  aftershocks have lessened and life is slowly getting back to normal.

On a much brighter note, the A-EON software developers and beta testers have been hard at work creating and testing the latest update to the Enhancer Software Pack. The new release, ESP V1.2, is a major upgrade and includes many new exciting features and additions which further enhance the AmigaOS experience. It is available in three distinct feature-rich editions, Standard, Plus and the new SE Edition, a special light version for older AmigaOne and compatible models, including Classic PowerPC and PowerPC emulation which do not require or support RadeonHD/Rx graphics cards.

Registered owners of the Standard and Plus Edition will soon be able to download a free V1.2 update from AMIStore. All three editions are available to purchase as a digital download from AMIStore or as boxed sets from authorised Amiga retailers. Check out the official A-EON Technology's official News Release for full details of all the new features and updates. In the meantime I'm going to install the SE Edition under AmigaOS4.1 Classic on my A.L.I.C.E. laptop. I will report back later.

Continuing with my Boing Ball theme. I spotted the following "Boing pole" on the Wellington waterfront. Now bring me some figgy pudding!!

Merry Christmas to one and all.